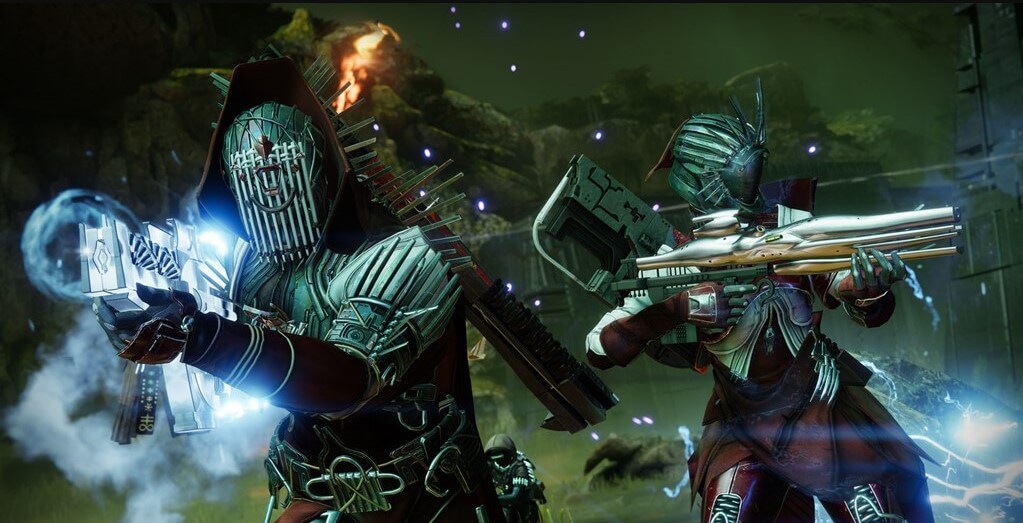 Welcome to our  tier list for the best PVP weapons in Destiny 2! If you want to see the best for both PvE AND PVP, see it here.

The weapons will be organized by S/A/B/C tiers and their specific categories of Kinetic, Energy, and Heavy.

Lastly, we’ll be updating our list of best PVP weapons regularly so check back after major updates.

Great stats all around in the best archetype of HC, only downside is no Icarus Grip which will change next season with in-air accuracy changes.

Top shotgun option with great range and accuracy as a slug. Only downside is in air like Ace.

With controller aim assist this hand cannon is very strong and allows it to hit hip fire shots at range. Getting a buff to mouse and keyboard next season which will solidify its place here.

Great for area denial especially in trials with a capture point. Even great against Renewal Grasp by firing it in Duskfield Grenade.

Pairs so well with Loreley Splendor for 1 shot kills with a gun that feels more like a hand cannon than a sniper.

Only up here because of Loreley Splendor, this is a 1 shot to the head with that exotic.

Amazing aim assist and is a free headshot on controller, also kills to the body with Titan exotic Loreley Splendor.

It has a long 1 shot range, and shoots fast giving it a huge margin of error.

Can get multi-kills so well with just one shot, making it among the best PVP weapons.

Free kill, sometimes multiple, essentially when heavy is picked up due to Wolfpack rounds.

With the catalyst you are very difficult to kill allowing you take ground and be lethal.

It is a sword with a projectile so it has range and allows you to block so it is versatile for multiple kills and taking ground.

Suffers from stats not being quite on Ace’s level. Overall is a good option and burn damage negates some of the diminished range.

No Time to Explain

Solid option and the exotic perk helps the margin of error and allows the occasional 2 burst.

The nerf knocked it out of S tier, but it is still a solid option and is definitely the best scout.

The 5 shot burst it what makes it exotic, the perk itself is quite situational. The aim assist is nice and the time to kill is forgiving.

Not as good of stats and smaller mag compared to Ace. Good against Renewal Grasp to stack up headshots stacks for a 1 shot kill.

Great choice for controller users and the exotic perk is very useful to avoid being traded out.

It uses special ammo so it suffers from ammo issues. It’s a 200 rpm 3 tap with amazing range so it would be S tier if it wasn’t for it’s limited ammo.

Unique that it is a 150 and has slightly faster TTK, but the stats compared to other options bring it down a little.

Pairs quite well with a grenade throw as a wombo combo. Area denial is not on Witherhoard level.

Good base shotgun and the perk allows hip fire in close range which is nice.

The perk is great for 6v6 modes as enemies are more likely to clump up. No snapshot and clunky handling makes this one difficult to use.

Would be S if it was not for Gjallarhorn.

Not in S tier because the aim lock and travel speed takes a while.

Can get multi kills, other options can do it more consistently.

A good option to string together multiple kills due to increased ammo.

Amazing to shut down supers, but supers are now less frequent, lessening its overall potency.

Because it gets more ammo, its a solid option to string together multiple kills.

Withhoard took over the grenade launcher space, but this gun is able to make some plays no other gun can with the timed release.

Is in a weird spot between shotgun and fusion rifle range. Legendary fusions are very strong right now, and those just perform better in general.

The aim assist of it is nice, Lorentz Driver is just a better version of this weapon.

Deals 192 damage with Loreley Splendor, so Le Monarque is better with that exotic. Otherwise is a clunky bow.

It’s a decent scout with a good optimal time to kill, but scout rifles are in a bad spot and the margin of error is low.

It’s a nice pulse with solid stats, the Siva Wwarm is quite situational and standard legendary options can do a better job.

In a good archetype and a pretty good perk. The super buff time won’t make too much of a difference in playlists with fewer people.

Has potential, but the stats just aren’t as good as other options.

Issue is it being a scout rifle, map design in destiny doesn’t help it out DMT is just better in all scenarios.

The pick synergizes well with hunters and Void 3.0, but has the issue of being an auto.

The shots are projectiles and the weapon’s volley gets broken by the nature of peek shooting in-game.

The range is really lacking and there are better SMG options. When it gets going with kills it is legit, just difficult to get to that point.

Has pretty good stats as an SMG, the exotic perk is great when it is active, but is rarely activated in PvP as players will play around it.

Solid auto rifle stats and its perk can help finish off low health targets behind cover.

Pretty good for an auto rifle and the perk helps boos its time to kill.

Good for area denial, not a great option for killing when compared to a good legendary fusion.

It’s very tough to get this perk to get going. If you do it is very strong, but that’s a big if.

Can get multi kills with the explosion radius and gets multiple shots. Otherwise, it is nothing special.

The tracking is very nice, but the reduced damage prevents it from being higher.

It’s a weaker version of truth.

Aim assist is very nice, but heavy ammo is best served on a weapon that can get free kills.

Requires precision and gets limited ammo.

BlackTalon is the go-to sword, this one is good for stalling.

It’s a PvE weapon, you don’t spawn in with enough ammo to utilize the perk for body shot kills. If it could do that it would be a great option.

You are just a sitting duck when using this weapon for no reward.

It is in a weird spot between a fusion rifle and a shotgun, it is a worse version of both at the same time.

Sidearms aren’t in the best spot and the perk is only active after a kill where a straight damage perk on a legendary is typically more useful.

Can’t really make use of the perk in PvP and these weapons are not good in PvP in general.

180 rpm handcannons are not good, and the only way the perk is active is via getting a suboptimal time to kill.

120 rpm hand cannons are not good and the perk revolves around using drang, a sub-par sidearm.

Revolves around others using this weapon. On its own its a mediocre sidearm and invisibility is very easy to achieve without a kill on hunters.

Sidearms are in a bad spot and has very bad recoil on mouse and keyboard.

There is no snapshot and there is no need for shield swapping in PvP.

Trace Rifles are not good in PvP, and the exotic perk does not have time to activate.

It’s a trace rifle and not worth using.

Other legendary and exotic pulse rifles are just better in terms of time to kill and perks.

It’s a trace rifle so it is in C tier.

It’s a PvE weapon, has no place in PvP.

To work bows need a gimmick with the exotic perk, and there isn’t a way to make this one work.

Neither fire mode is a good option. Legendary options outclass this.

Legendary fusion rifles have better kill potential and the exotic perk does not get activated in PvP.

Legendary shotguns are simply better as they have better 1 hit kill range.

Scout rifles are not in a good spot, and the perk is difficult to make work.

Same fate as Trinity Ghoul of it being a bow and has no gimmick.

It’s a trace rifle and the perk requires a kill and isn’t good when active for PvP.

Scout rifle issues and the perk is for ammo return which makes no difference in PvP.

Not too different from high end legendary shotguns that use special ammo. Not worth the slot when compared to the best PVP weapons..

The perk won’t get activated in PvP as it requires you to hold on to the ammo and get kills with other weapons, risking giving heavy ammo to the enemy.

Whisper of the Worm

PvE weapon here, and the perk has no value in PvP.

It freezes targets that any other weapon would otherwise just kill. It adds an unnecessary step making it not viable whatsoever in PvP.

Perk is a PvE perk and doesn’t work in PvP.

If you have heavy ammo, it is much better served with a weapon that can get easy kills.

Only real play is with movement, not kill potential.

With hoard with 1 shot accomplishes the same as Anarchy with 3 shots.

This is an exotic tier list, which as you know only one can be equipped.

The tier list itself is heavily dependent on the power of legendary weapons and the seasonal mods and activities.

Here’s our criteria for each tier of the best PVP weapons:

Thanks for reading! Sign up for our Destiny 2 Closed Beta.