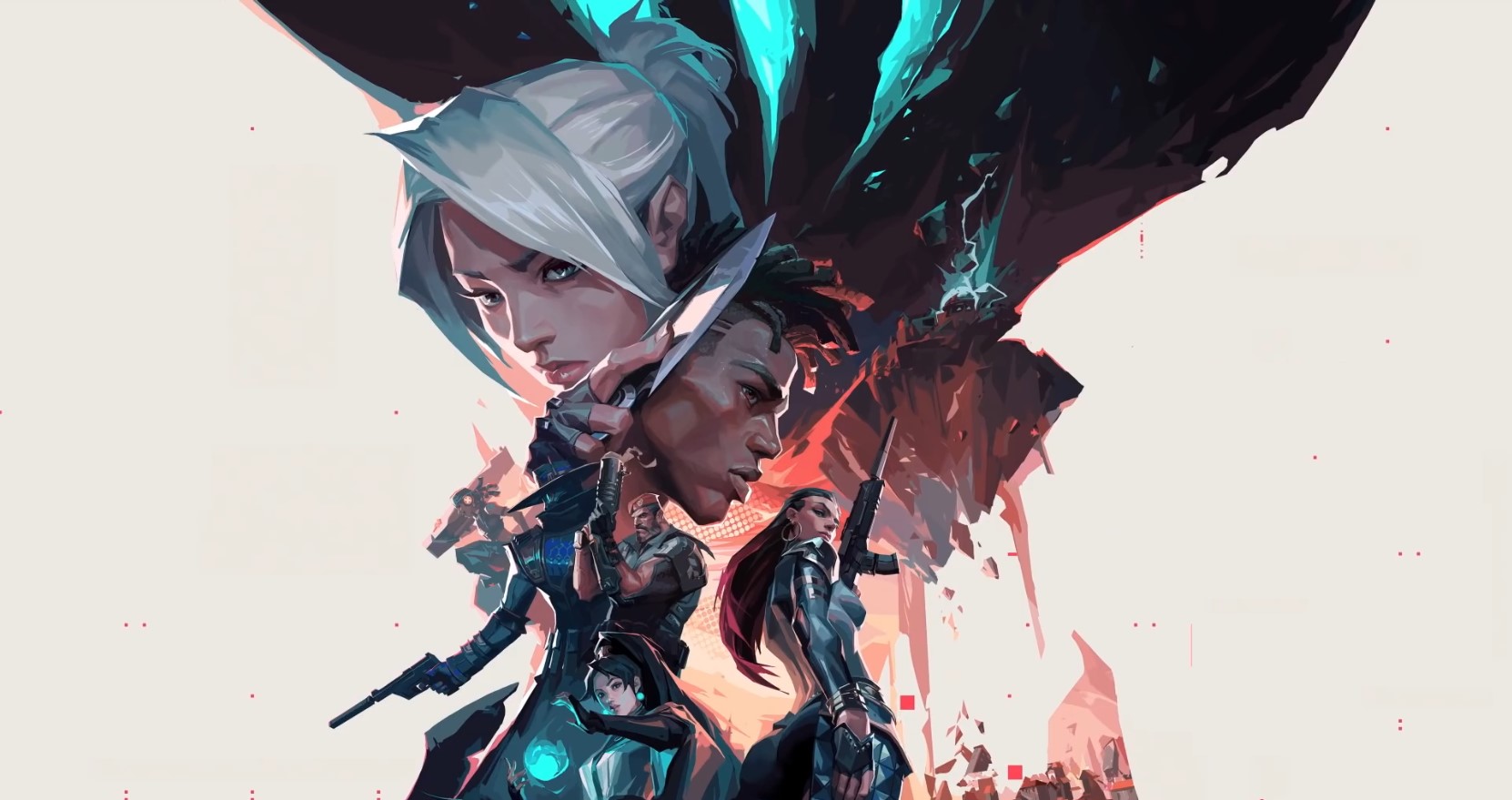 The Best Valorant Agents for Patch 2.06

Welcome to our Valorant agent tier list for climbing ranked! We created this list with the help of our high ELO experts (Immortal+) who play in NA and EU.

This is a general list that is meant to be helpful whether you’re playing solo or with a squad, but it does lean more towards coordinated teamplay rather than trying to carry lone-wolf style.

Note that at the beginning of the patch, we will give predictive placings based on the buffs/nerfs. Check back midway through the patch for an update (if it’s still the same, it means we predicted correctly!).

Here are the explanations why we’ve placed each agent in their tiers. If you have any questions please ask in the comments below and our experts will reply as soon as they can.

If you have trouble facing a particular agent, check out our article on How to Play Against Every Valorant agent. It shouldn’t be surprising that the likes of Tenz, Wardell, and Mixwell who are mechanically-gifted fraggers, have made her a frequent choice in pro play.

Despite her nerfs to the OP, shotguns, and her knives, she’s still an S-tier pick, especially with the release of Icebox.

Even with nerfed turret activation range, Killjoy still gives her team a ton of map control that she can adapt on the fly. Since her release, we’ve seen her get played more in pro matches and she can really wreak havoc in the uncoordinated ranked ladder.

Her ultimate, when left unchecked, offers ways to seal a round whether its on attack or defense, giving her more offensive capabilities than her Sentinel counterparts.

If this was a “Frustrating to Play Against” tier list, Raze would certainly be a top pick. She excels in chaotic situations so she can have trouble against patient and coordinated play.

However, this also makes her incredibly strong in solo queue where communication can be inconsistent.

Her explosives are particularly useful against Sage/Cypher’s abilities since she can destroy their abilities from afar.

She’s a fine pick on most maps but she’s particularly good on Bind since you can send her Boombot and grenades through the teleporters to defend multiple areas, such as helping to defend hookah while being near A Short. Despite being nerfed from her former glory, Sage has worked her way back into the fold with her recent prominence in EU’s First Strike tournament.

She’s especially good on maps like Split, and her resurrection is still one of the best ultimates in the game.

In comparison to Skye, her heal is only single target but it allows you to cast it from a much farther range.

As far as Sentinels go, she’s the premiere delayer with her slows and signature wall but she doesn’t have as much info gathering as Cypher and Killjoy.

When Valorant first launched, it was clear the Sova would be an agent that scaled with time. This has proven true as players have continually pushed the limits of his arrow lineups. He provides a ton of useful capabilities, such as his drone that can be used to scout/lead pushes onto his site and his recon dart that can reach/scout angles that even Cypher can’t.

He’s become a staple not just in ranked, but also in pro play due to his versatility. If you’re willing to put in the time to practice, definitely give Sova a shot in the current meta. Brim has a very well-rounded ability kit in the game, making him incredibly valuable on both offense and defense.

No other agent can place multiple long-ranged smokes safely and simultaneously, making him a valuable asset for making executes run smoothly.

We’ve seen how valuable he can be due to his ability to single-handedly win rounds with his long-lasting molly and ultimate to deny defuses.

After a round of buffs and a few nerfs to Omen, Brimstone his risen greatly in viability. Gathering information safely is crucial in Valorant and Cypher is top of the class in that regard.

His kit offers unique strengths such as being able to solo hold a site with his gadgets while influencing other parts of the map with his Spycam.

On both sides of the map, his Trapwires go a long way to shut down enemy flankers and lurkers, giving his team much more safety and assurance than others can.

In recent times, Jett established herself as one of the premier Duelists of Valorant. She’s the best OPer in the game, has incredible clutch/Ace potential with her ultimate, and provides a surprising amount of utility with her smokes since she can set up instant one-ways.

Omen has solidified himself as an S-tier agent due to his ability to fit into nearly any team comp on any map. His Paranoia has become one of the best non-ultimate engages in the game and is definitely on the nerf radar in some capacity.

Lastly, his free and unlimited smokes are especially useful in long-lasting rounds, especially after the enemy team has spent most of their utility.

Phoenix has one of the most useful ultimates due to its ability to allow him to safely initiate and gather information. The rest of his kit is very versatile with self-healing, vision denial with Blaze, and spike denial with molly, but he can struggle on defense at times

Be sure to pair him with Omen or other smokes to maximize the effectiveness of his flashbangs, otherwise can be easier to avoid at higher levels of play.

Although Reyna certainly provides a high-ceiling for pop-off potential, she’s can be feast or famine due to needing kills to fuel her Q/E usage. She’s been getting some momentum as a pick in pro play despite her original reputation as a pubstomper.

No other agent can match her ability to clutch in 1vX situations, so if you excel in those situations she may be the agent for you.

Viper has received a ton of buffs over time and has been getting more and more play in pro matches. She’s trickier to play around than other Controllers since she’s so committal, but if your team knows her playstle, she can really shine.

If you want to pick her up, be prepared to practice lineups and one-ways in custom matches. 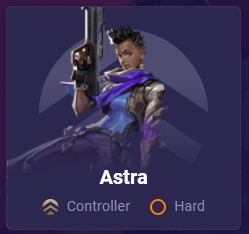 Although it’s still early, Astra has the potential to influence nearly any part of the map at nearly any time.

She will reward players who love to play Valorant like a chess game, understanding macro plays and being able to predict the flow of the game.

However, she is one of the hardest agents to pilot because of this. There’s a chance that she may struggle on the ladder but be a beast in pro play In Patch 1.07, Breach received some significant buffs throughout his whole kit.

He gained an extra charge of his flashes (which were also buffed), his ultimate now has faster detonation blasts, and his Concussion now de-scopes agents and prevents them from re-scoping.

With these changes, Breach has re-established himself as one of the best initiators and he has a unique niche of being able to counter Operators in a meta where people think Ops are OP.

Unfortunately since he has to play for his team and isn’t super self-sufficient, he may be more suited for pro play than ladder. 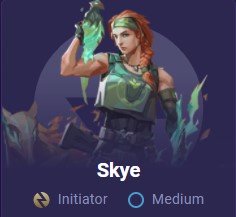 Based on our first impressions playing the agent, we believe that Skye offers her team enough utility through her heals, scouting, and engage abilities that she will be valuable to many team comps on most maps.

That being said, she’s incredibly reliant on team play, so it may be difficult for her to break into S-tier as she may struggle when she’s alone and in clutch situations.

However, that is more of a concern as a solo queue agent, in competitive/coordinated 5v5’s, we expect her to have a consistent presence due to her versatility.

Yoru is a unique agent that excels both in solo play and playing with a team.

His flashes are very powerful for both you and your team – for example, Phoenix mostly flashes for himself, Breach flashes for his teammates, but Yoru can do both well. 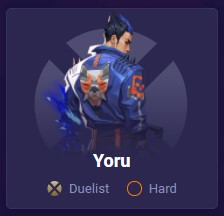 His ultimate allows you to enter a site, spot the whole enemy team, and get out without any issue, acting as a Sova drone on steroids that also allows you to make big plays. 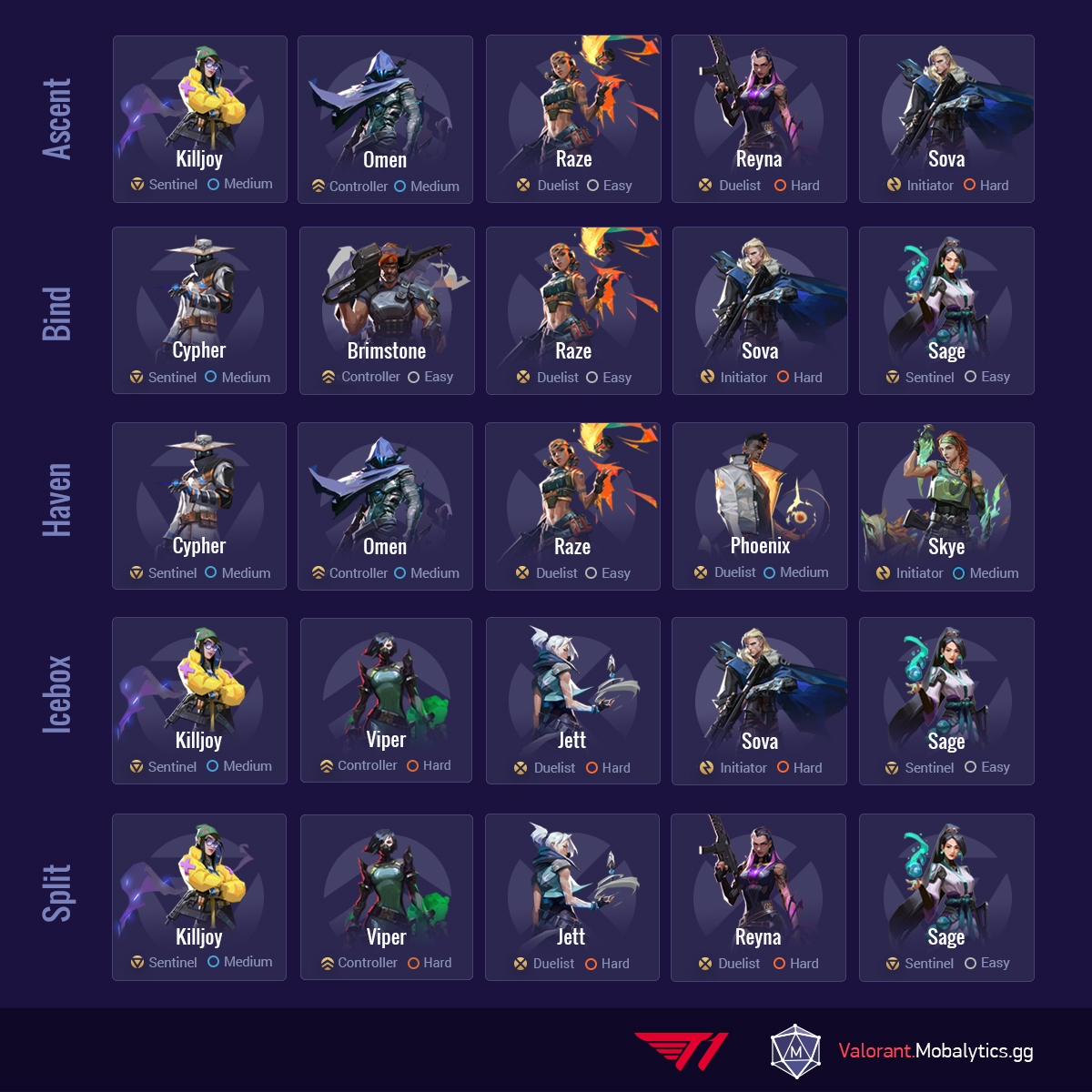 These are some powerful team comps that we recommend for each of the Valorant maps.

Here are some additional options that you can interchange based on your agent pool.

Just make sure to build wisely, so if you’re replacing Omen, you’ll probably want a Brimstone and so forth.

Overall, the criteria for S/A/B are as follows:

These ratings are more suited for newer players (Iron, Bronze, and Silver) and relate to how much time and experience you need to be useful to your team compared to other agents.

Here are examples for each:

Brimstone is an ideal agent for beginners with abilities that are very straightforward and easy to understand.

They can all be safely used from behind cover and are useful even when you’re playing from behind.

Cypher’s abilities require you to have additional macro understanding compared to Brimstone.

You need to understand where to place your gadgets, how to balance between switching back and forth to your camera, and how to use your gadgets in combination with each other.

Defending can be more forgiving for a beginner, but on offense, you need to learn how to lurk and where flankers are likely to come from to make your Trapwires useful.

His ultimate is also harder to activate compared to Brimstone.

With only one ability that can be cast without kills, Reyna can be very difficult to pilot at lower skill levels.

Even if you get a kill, you have to be able to quickly decide whether you need to use her Q or E.

She can struggle to hold a site with her C alone on defense so she’s better suited as a flanker which is a harder playstyle for lesser-skilled players.

As always, we welcome all discussion and feedback so please leave any comments/questions below! Be sure to check out our Valorant site to find the best agent ability lineups for every map.