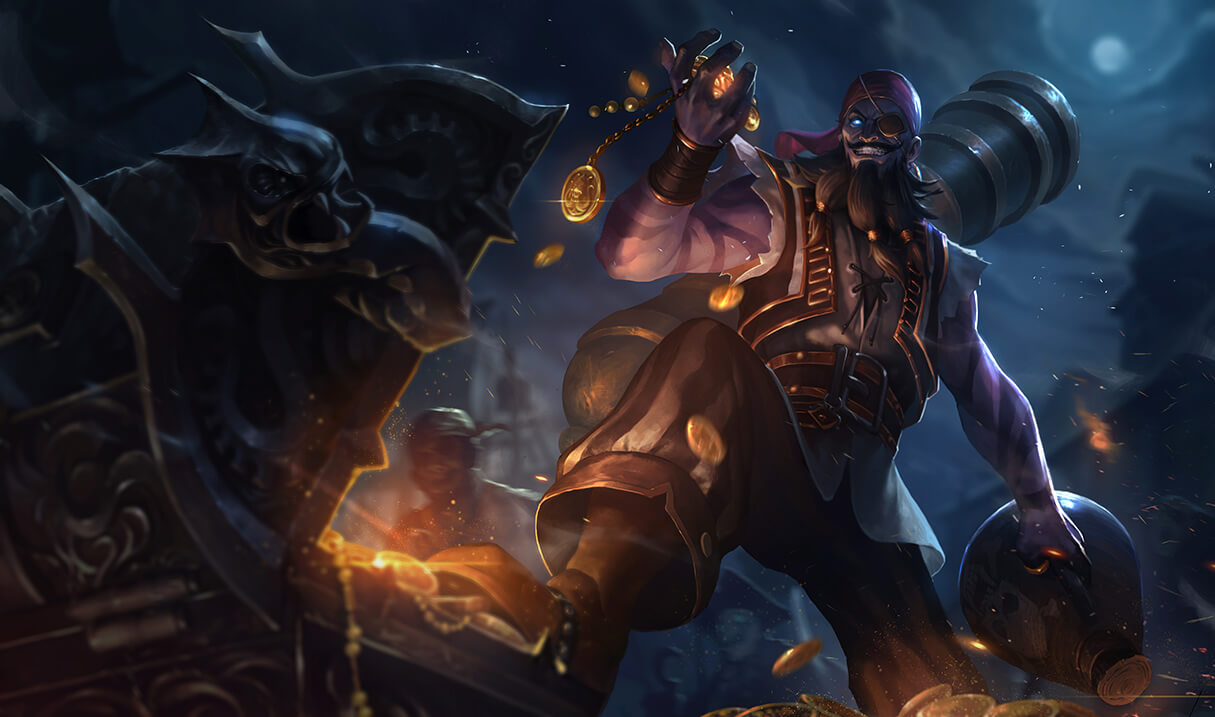 Farming: An Advanced Guide to Building and Capitalizing on a Gold Lead By its genre definition, you already know that League of Legends is a “MOBA” (Massive Online Battle Arena). If you peel away at it’s surface and really break it down, however, you’ll begin to realize that your usual round on Summoner’s Rift is actually comprised of many layers of games within the game. Here are a few examples:

At the most macro level of the totem pole, a LoL match is similar to a Real Time Strategy or Tower Defense game. You’re controlling and upgrading units in order to destroy enemy structures, while trying to protect your own.

The next level down, is similar to a 5v5 deathmatch where Teamplay is tested – are you able to coordinate your abilities better than the other team?

The Vision game can be similar to playing Battleship as hide your Wards while searching for your opponents. At other times, it can feel like King of the Hill as you fight for prime warding spots.

For tanks, utilizing your Toughness and peeling for your carries is like protecting the squishy VIP on an escort mission.

The Jungler experience is akin to a stealthy spy game as you weave behind enemy lines.When you’re looking to gank, it’s like a horror hack-and-slash as you create dread in the minds of laners, showing up where your Aggression is least expected.

Finally, at the totem’s most fundamental level, is the Farming game. This level is all about collecting the necessary resources of gold and experience in order to nurture the seed that your champion begins as. Every 30 seconds, Summoner’s Rift generates waves of minions that represent potential increases of power – it’s up to you to tap into them and other sources (such as objectives) in order for your character to feed and grow faster than your enemies.

Farming is the fundamental game because it fuels the arms race which influences the rest of the totem pole. It builds a foundation that creates a lasting impact on the overall flow of the game. The team with more farm will have better items and more experience – better items and more experience means having higher stats and stronger abilities than their counterparts.  Sure, it’s not impossible for the team with less farm to win, but their road is definitely much more difficult as they’ll be fighting an uphill battle. Welcome to our Skill Decompilation on Farming.

The numbers behind your Farming score

Between our eight GPI scores, Farming’s sub-skills are the most straightforward.

Note that there are other scores will appear based on your role:

Throughout your match, the GPI will measure your:

We separate these measurements into three different time thresholds:

These time thresholds allow us to measure your effectiveness in Farming as the dynamics of the game change.

In the Early Game, your primary source of gold comes from CS-ing minions in lane or taking camps in the Jungle. We designate Early Game as the first 15 minutes because it is usually the length of time until the First Turret goes down. If your Early Game score is low, you’re likely to be missing CS. If you’re a Jungler, perhaps your ganks haven’t been working out so you’ve been wasting time that you could have been collecting camps.

Once the First Turret is destroyed, the map begins to open up as some lanes will end their phase to begin roaming. We measure this as the Mid Game. From 15-30 minutes, gold sources expand from being mostly minions and camps, to including more kills and more objectives. Your score here will depend on your role. As a Support, you may be roaming more to help ward and clear parts of the map. As an ADC, you may still have a high Farming rate as you stay in lane pushing toward your power spikes.

Beyond 30 minutes, the map has greatly opened up. Although carries will still be collecting CS from minion waves as they push toward your base, the game has shifted greatly toward team fighting. Your score here will depend on how much you’re grouping with your team as 5, whether you’re getting kills and assists, and whether you’re securing major objectives.

We do keep track of stats post 30+ minutes but keep it in the back-end because many games will end by the 30 minute mark. The data also isn’t that useful for improving your Farming score because the dynamics of the game have changed as many champions will have most of their items and won’t need as much gold.

General Income looks at your income distribution throughout the entire game:

Farm efficiency measures your ability to secure CS when you actually have the opportunity:

To be a great Farmer in LoL, you need to be like a tightrope walker. You must walk a fine line in order to succeed – lean too much to a side and it can be fatal. If you focus too much on farming you may miss out on crucial team fights – having all your items is pointless if your team is dead. If you don’t farm enough, your team will also suffer – your effectiveness will be cut if you’re behind on experience, items, and power spikes.

By the end of this Decompilation, you’ll have more tools to achieve the perfect balance for your Farming game. We’ll only not only teach you how to mechanically improve your Farm with CS’ing techniques such as last-hitting and wave management, but we’ll also help you improve your game sense to help you still be a team player while maximizing your overall gold income.

To maximize your Farming, you’ll need to understand the value of your choices.

The item values you’ll have to memorize will differ on your champions and build, but there are certain values you should always know or have a feel for (as of Patch 7.9):

Waves are your bread-and-butter source of income. They’re dependable, predictable, and cannot be stolen by your enemy like Jungle camps. In the Early Game lane phase, your team’s ability to collect the waves will depend on your individual mechanical skills in last-hitting and wave management.

As the game goes on, and it’s easier to waveclear without having to worry about mechanics, collecting minion waves becomes more a question of making sure carries hit their item power spikes.

With enough practice, collecting minion waves will become second nature. Perhaps even some day you’ll break the record for the most CS in a professional game (current is 764 by Froggen).

Objectives are key sources of Farm around the map that will often pull you away from your waves. Although it’s possible to take objectives alone, you’ll often need multiple champions to kill or contest one. Most objectives provide team gold and global benefits, as a team you’ll have to decide whether your time is worth potentially leaving behind CS in order to contest or grab one.

Turrets are the roadblocks that control minion wave flow and your ability to navigate toward and around the enemy side of the map.

The most valuable turrets in terms of gold are the First, Outer, and Inner. Inhibitor Turrets and Nexus Turrets don’t yield as much gold but are of course crucial for victory.

Depending on the situation, it may be worth leaving your lane to help another lane race to take the First Turret or another turret in order to open up the map and end the Early Game.

Here are their values:

Dragons aren’t worth much in terms of gold (Elementals only give 25g to killer, Elder Dragon gives 250g global and 25g for killer), but they’re worth investing time to contest due to their different team-wide effects.

Here is a great explanation by Jatt about the Elemental Dragons and their benefits:

This objective (25g to slayer) has become much more powerful with the 7.9 Patch. If you have the time and resources, she is a more valuable target than Dragons due to her flexibility and snowball potential. In honor of her shiny makeover, we’ll be explaining her facets in more detail.

This is the most valuable objective (300g per person, 325g for last-hitter) in Summoner’s Rift due to its many benefits. It not only affects your whole team (that are alive when it is slain), but it also empowers minions that are nearby champions with its buff.

Baron can often be the location of a match’s climax as it usually the turning point of a close game, turning the tides of victory toward one of the teams. Throwing a game at Baron is a tale that’s old as time – if you’re ahead it may be better to bait and look for a pick instead of committing to a risky fight. If you’re behind, do your best to scare the opposing team away or prolong their fight with Baron so they take more damage – once they’re weakened, push in to try to contest or finish off the damaged enemy team.

Kills, assists, and streaks measure the values of combat interactions between champions throughout the match. They create a changing market of gold worth. Some kills are indeed worth chasing after – other times, it may be better to let the straggler survive but take the objective instead. To push your Farming game to the next level, here are some of our favorite tips – curated by our analyst Hewitt “prohibit” Benson.

How to utilize your Practice Tool

Be mindful of minion attacks

Learn the tempo of the map

Know when to give up CS

Your teammates need items too

Athletes practice their balance everyday in order to achieve their peak performance. In order to become the best player you can be, you must also achieve balance in your game. This especially holds true for Farming where you constantly have to consider your mechanics, resources, risks, and rewards.

Keep track of your stats after every game. Critique yourself and set realistic goals. If you’re finding yourself zoned out and not able to farm, watch your replays to see what you could have done better. Be mindful of the tightrope walker, and the journey of your climb will find its center.

Revisit our other Decompilations if you’d like to learn more about Aggression, Teamplay, Toughness, or Vision.