Welcome to the Mobalytics Predictive Tier List for League of Legends for Patch 12.22!

Ready for the last patch of Season 12?

Our panel of experts has you covered for every role and rank.

Below, you’ll find our two League of Legends champion tier lists, one for general ELO (low ELO up to high Plat/low Diamond) and one for high ELO (high diamond up).

For everybody else, we have prepared much more:

Methodology TLDR: This LoL list was curated in collaboration with our League Experts: Adam ‘Moriarty’ Isles, Dan ‘Aux’ Harrison and Phy, and our Role Specialists: Shikari, Only, Command Attack, and Yen. Unlike most LoL tier lists, we publish ours before, or as a patch goes live, according to the predictions of our in-house experts.

For a more in-depth explanation for our methodology, head to the bottom of the article.

To see all the explanations for our expert picks and more, head to our tier list feature! 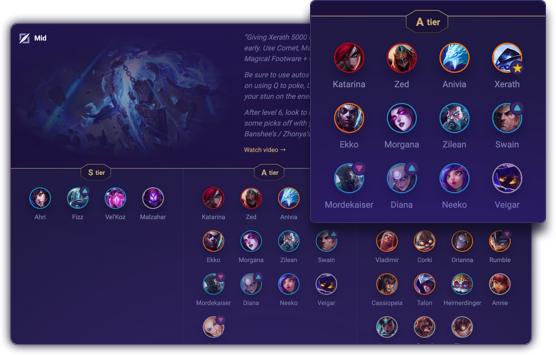 Our difficulty ratings focus on how long it would take to start seeing a champion’s power level on our list in terms of the number of games invested.

Let’s say you’re debating between learning and climbing with Jax (A-tier | Simple) or Rengar (A-tier | Severe) – you’re going to want to go with Jax. Why? This is because Jax has a lower skill floor and would require less games to play at an A-Tier level in solo queue. If you tried to pick up Rengar, you wouldn’t get the full value of A-tier until after about 15 matches of practice whereas with Jax, you would get that full 15 every time you play him.

Disclaimer #1: If a champion isn’t on our LoL Tier List, it doesn’t necessarily mean that you can’t climb with them. You’ll just have to put in more effort to get similar results as our Optimal, Great, and Good choices for climbing.

Disclaimer #2: This list is meant to evaluate the champions that we believe are best for climbing Solo Queue. Although there can certainly be some overlap, we are NOT looking to name the champions that are the best in pro-play or organized, competitive 5-on-5. This is why champs that require a ton of team coordination such as Ryze, may not be included or ranked highly.

As always, we welcome all discussion and feedback. If you have any questions about picks that we didn’t expand on or would like to let us know how you feel about Patch 12.22 and our predictions in general, join us in our Discord! If you’re wondering how we make our tier list, check out our video explanation.