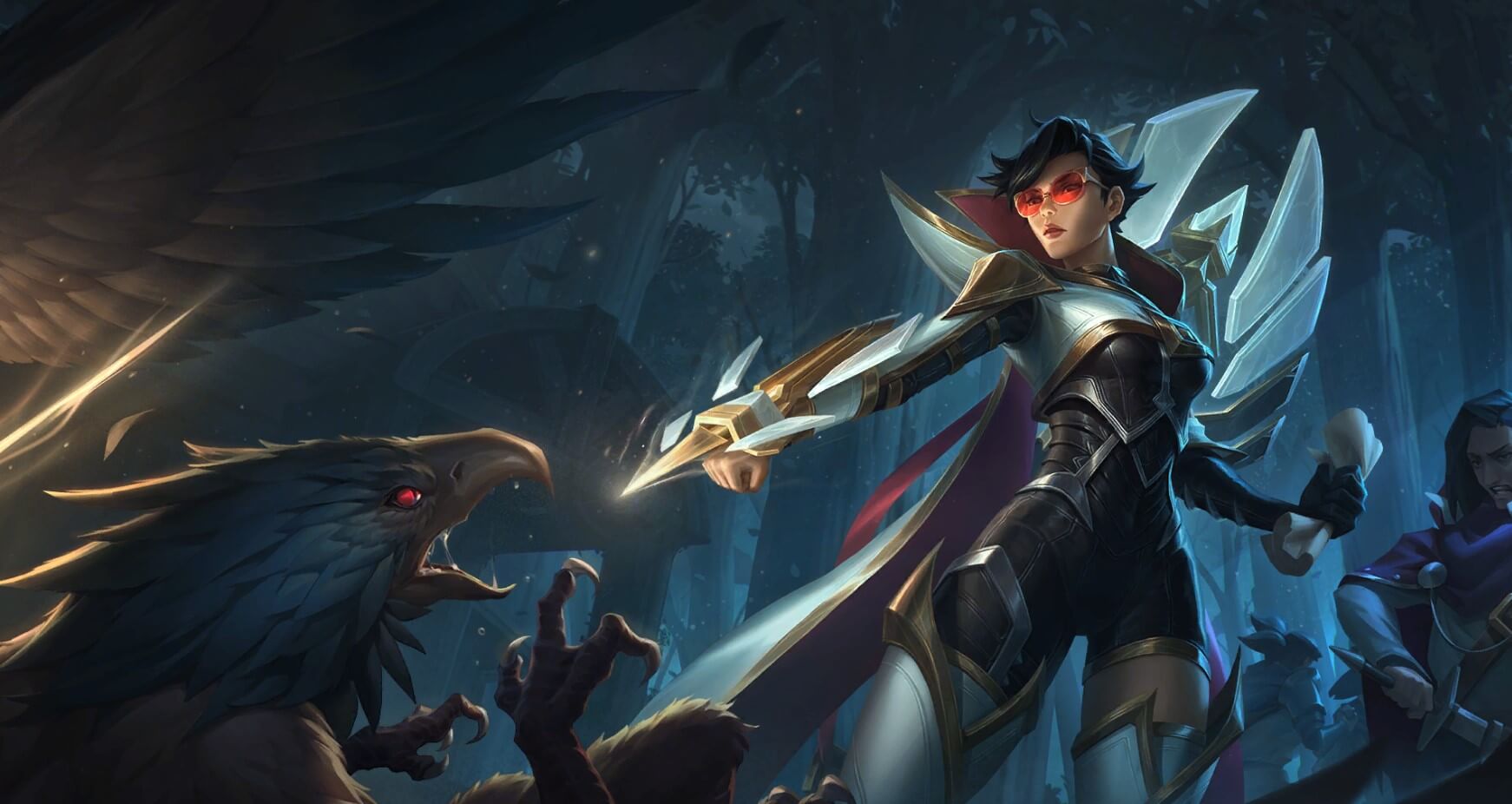 The Best Meta Decks for Legends of Runeterra (Domination)

Hey everyone! Welcome back to our Meta Decks Report for Legends of Runeterra.

As always, these deck recommendations will be provided by our experts, Kuvira, Shugo, and Scarzig!

Note that our experts update the tier list often so there may be some lag time between this blog version and the one on our site.

Whether you like to play aggro, midrange, control, or combo, we’ve got meta deck archetype for you. Enjoy! 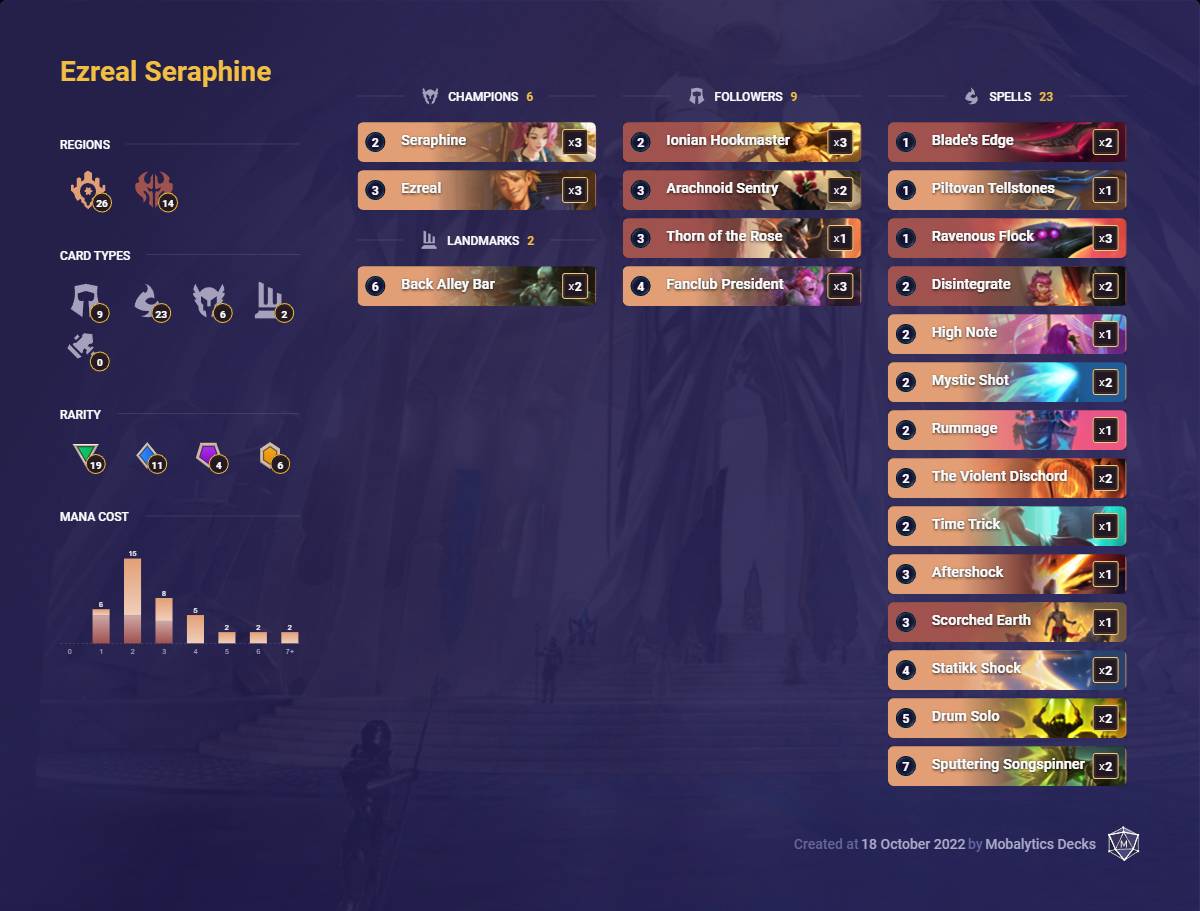 Ezreal Seraphine takes the classic Noxus PnZ shell and spices it up with some extra splashy goodness. Instead of building up Tribeams, this deck aims to cast a large variety of spells in order to build up and support Seraphine’s doubling abilities. Once online, the combo of Ezreal + Seraphine can burst down the enemy nexus out of nowhere!

Look for removal that matches up well against the opponent’s deck. Sentry + Flock is a great combo against Demacia decks. Back Alley Bar is a good keep against the mirror. 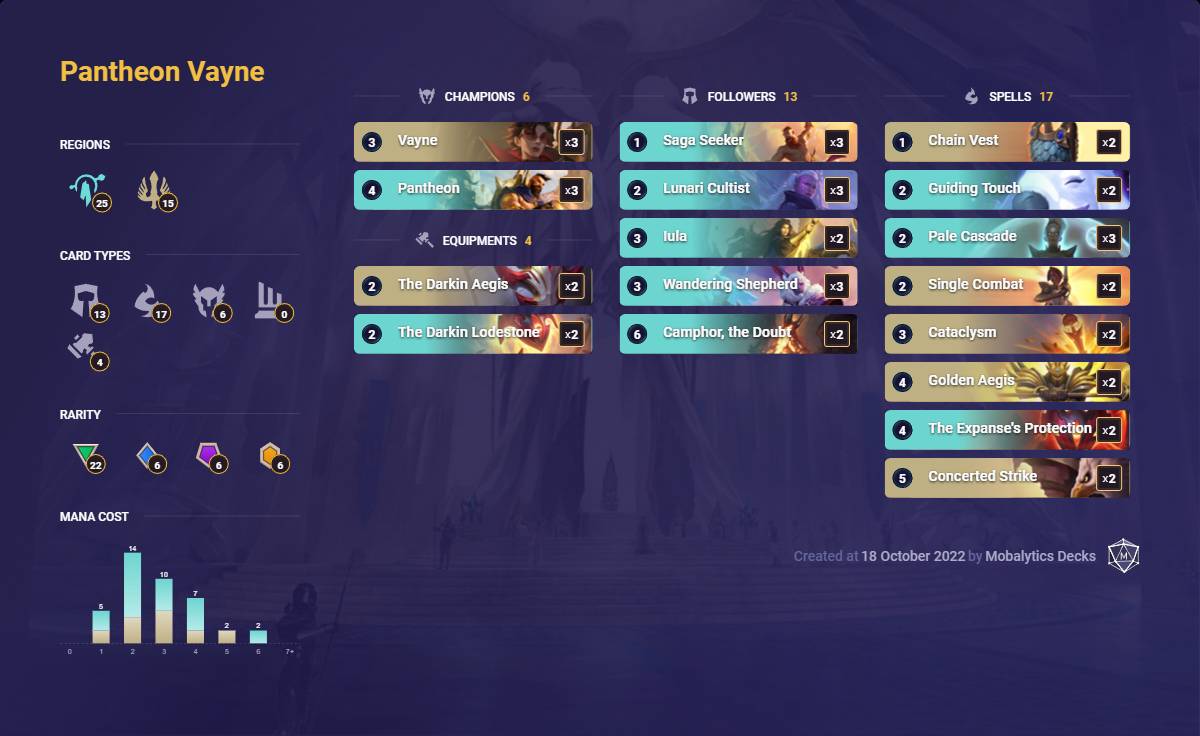 Pantheon Vayne is the latest Fated variant, with Vayne an incredible amount of support to this Demacia Targon staple. Saga Seeker carries the deck’s early game as it builds up towards leveling Pantheon. The addition of Vayne gives access to more free attacks to abuse our massive Fated threats!

Look for Saga Seeker as our priority #1, but also try to pick up an equipment card. Equipment turns on Lunari Cultist and The Expanse’s Protection, as well as provides an efficient source of triggering Fated. 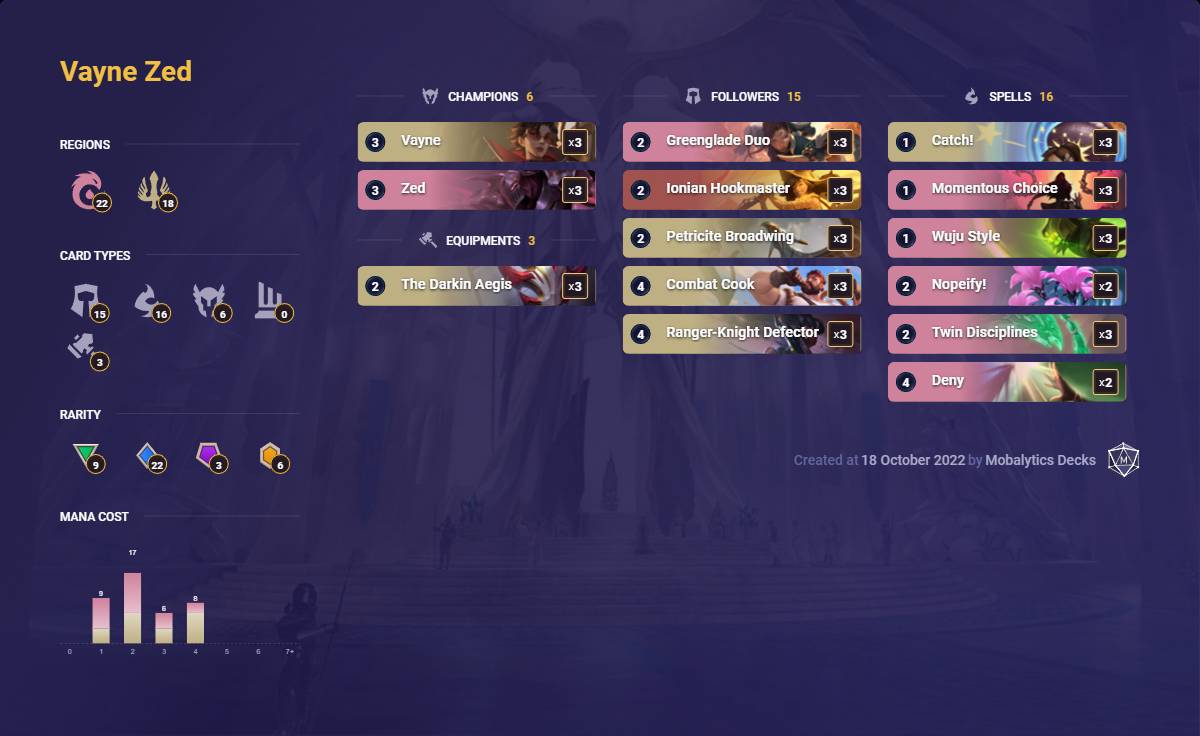 Zed is back with a new Demacia Ionia core, and now that Vayne has made an appearance, it’s more efficient than ever before! Forget Rallies, Tumble allows Zed to freely attack with ease, all while equipping him at the same time. Combined with powerful combat tricks like Momentous Choice and Wuju Style, it’s sure to put the opponent on a short clock!

This deck relies heavily on getting its champions and equipment early. Vayne and Zed should be top priority, but Ionian Hookmaster is also a solid pickup. 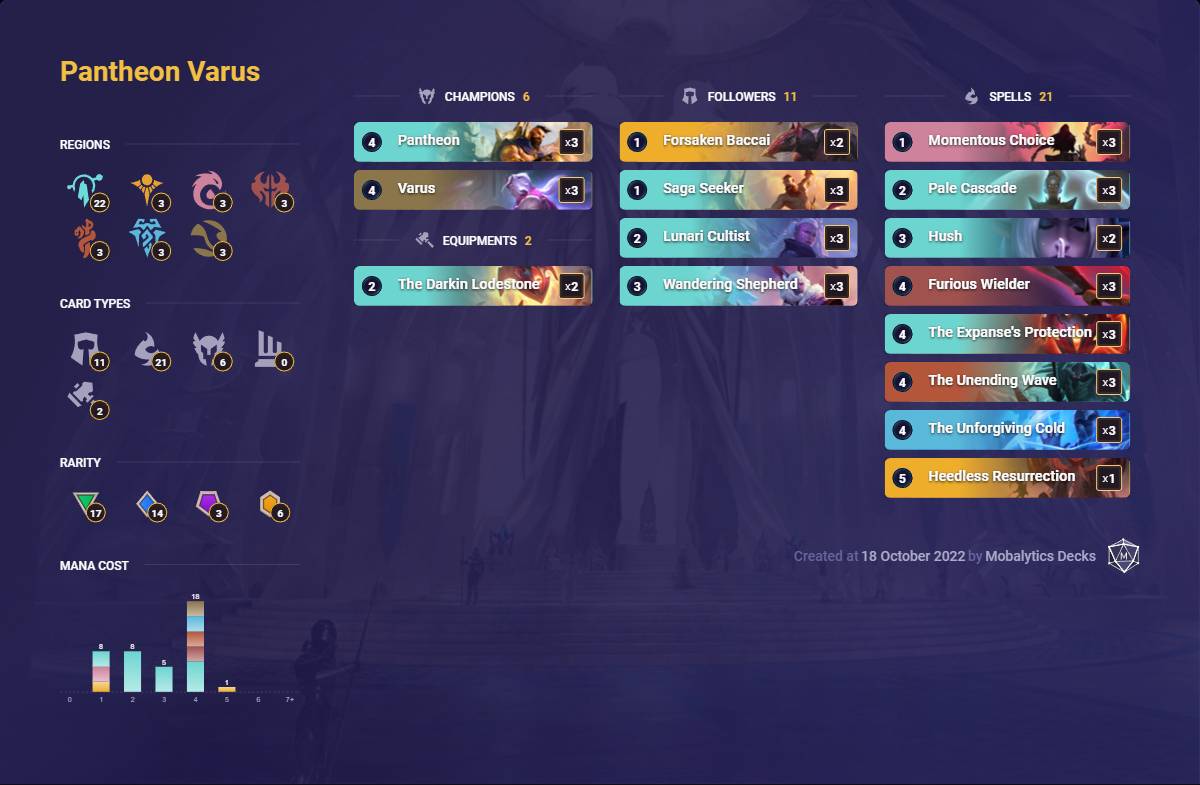 Pantheon Varus plays similar to other Pantheon lists, except it trades the free attacks and Rallies for a variety of powerful support spells via Varus’ Origin. Additionally, instead of relying on Pantheon as the main win condition, Varus is equally capable of closing out the game. Those attack buffs stack up fast!

Our actual equipment suite is quite low with only Lodestone, Shepherd, and Varus. Prioritize Lodestone and Shepherd in order to enable all of our “if you have equipped” cards. 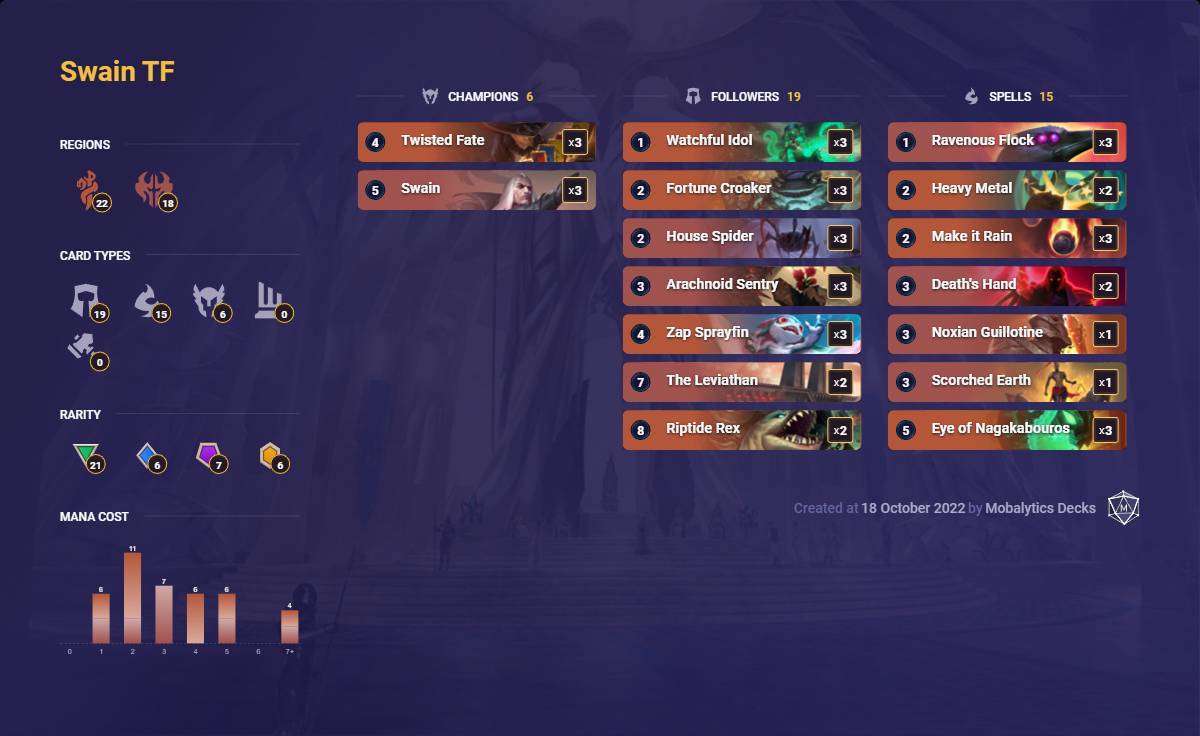 Swain TF is the more controlling side of Bilgewater Noxus. It takes advange of the Sentry + Flock package and utilizes cheap units and spells to win the board. Swain levels incredibly fast with Watchful Idol, and once flipped, becomes a massive threat that the opponent can not ignore!

Watchful Idol is the perfect start to turbo level Swain by turn five. Additionally, look for cheap units like House Spider or spells like Make it Rain to halt early aggression. 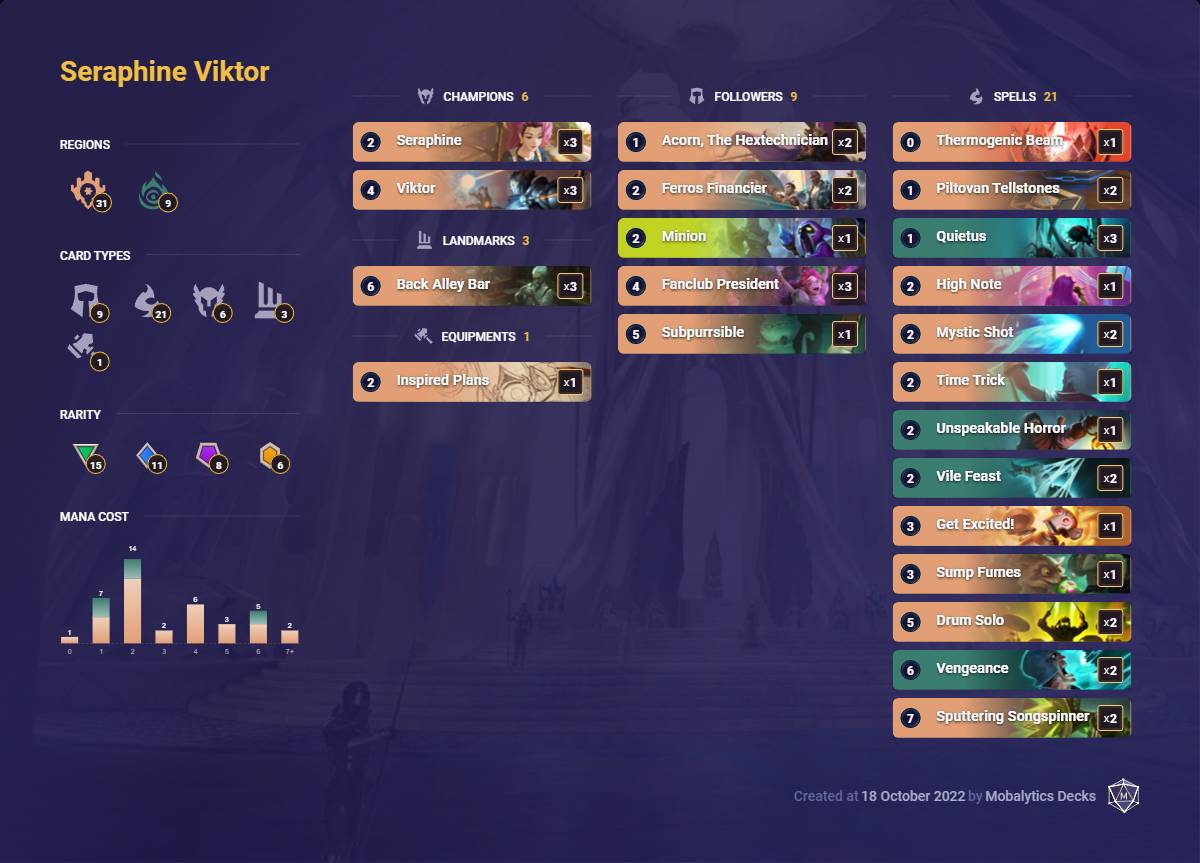 Seraphine Viktor takes the explosiveness of Seraphine and adds the control side of Shadow Isles. The PnZ SI combinations gives access to most of the best, well-rounded removal spells, aimed to punish the opponent and take over the game.

There are a lot of 1-ofs and 2-ofs in the deck in order to consistently capitalize on Seraphine. Focus on finding the right removal spells for the matchup. Seraphine and Viktor are always welcome keeps. 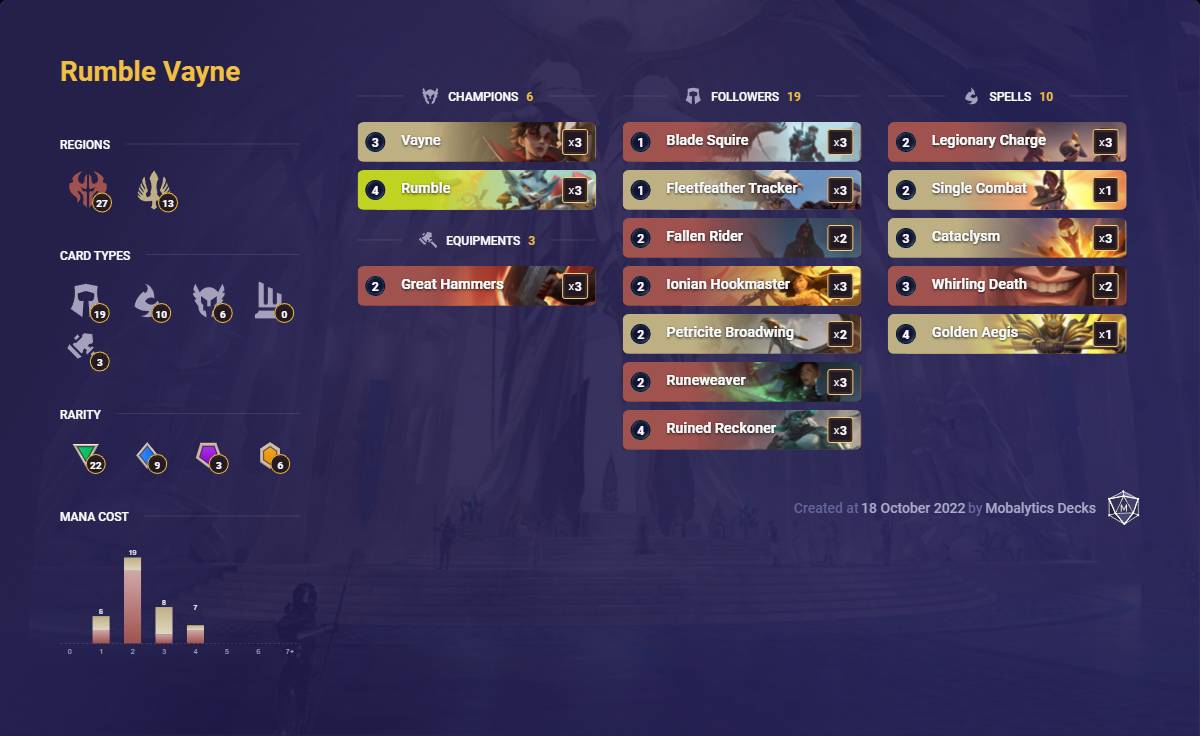 Hard mulligan to find Rumble or Legionary Charge. Most units are simply here to provide discard targets for Rumble. Vayne is a solid keep if you’ve already found Rumble. 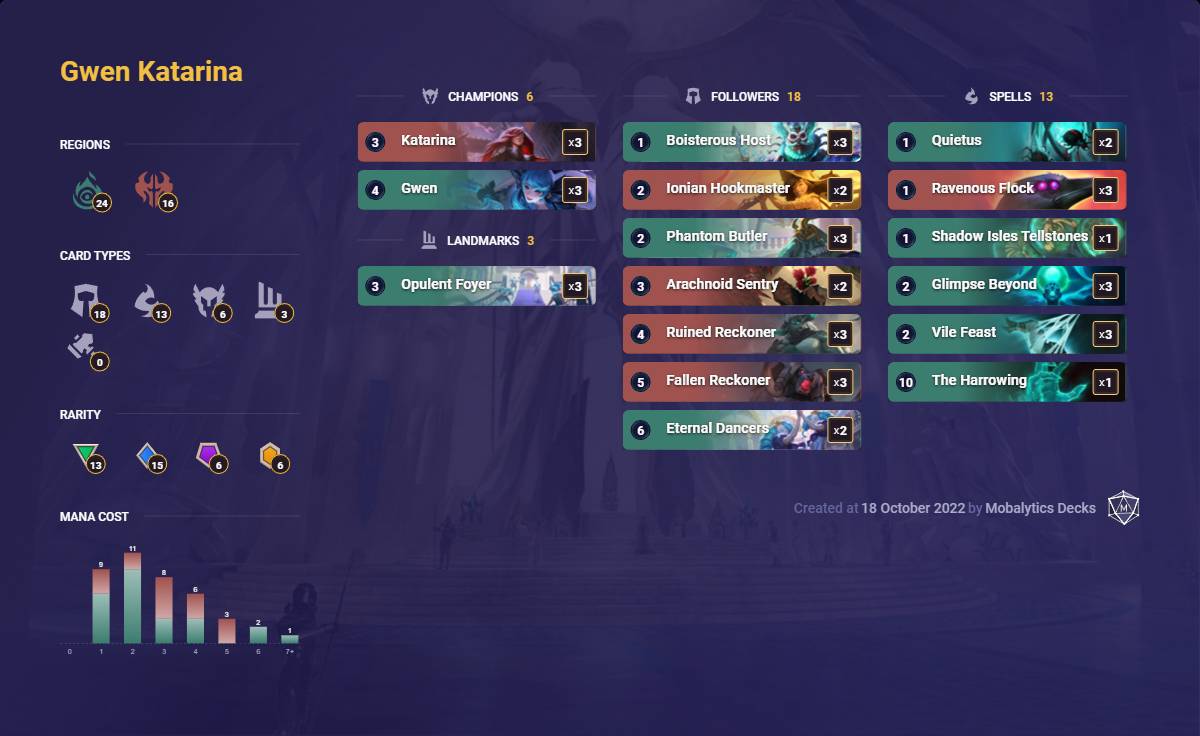 Efficiency and tempo are the name of the game. Go wide with cheap units as you pressure the enemy nexus. All three champions are difficult to block as they build up to threaten even more damage each turn. The Reckoner duo denies blockers and launches attacks even on defending turns.. And once we reach that final dance, the board floods with an endless rallying army!

Focus on early units such as Boisterous Host, Burgeoning Sentinel, House Spider, and Phantom Butler. Gwen is a great keep alongside an aggressive hand.

Equipment beatdown is the name of the game, and Jax takes it to a whole new level. With help from Vayne, Jax flips very quickly. Then all it takes is a few free attacks or Rallies to end the game.

Look for an efficient curve, as you don’t need to bank much spell mana early on. Early Improvise units should be prioritized in order to maximize Tumble efficiency. 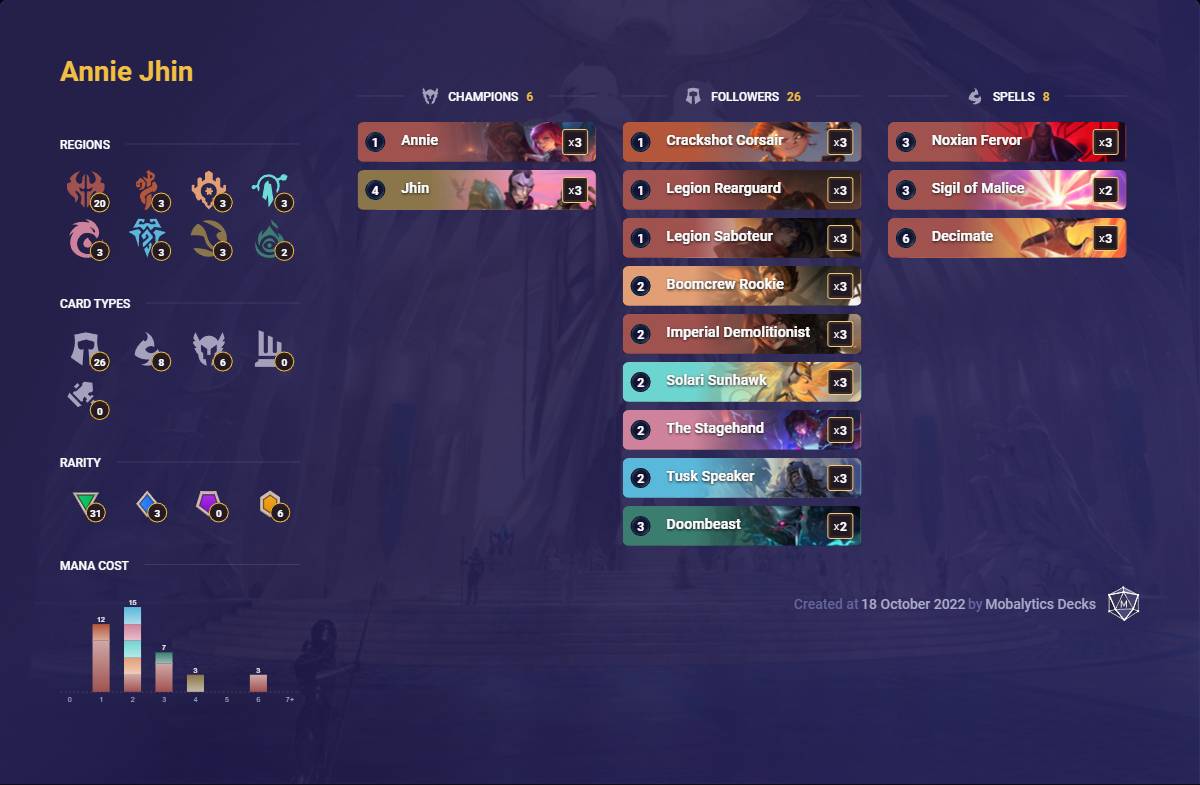 Annie Jhin is an aggressive burn deck that utilizes some of the most efficient 1-drops in the game. Flood the board wide early and stun any blockers that get in your way. Then finish the game with burn! 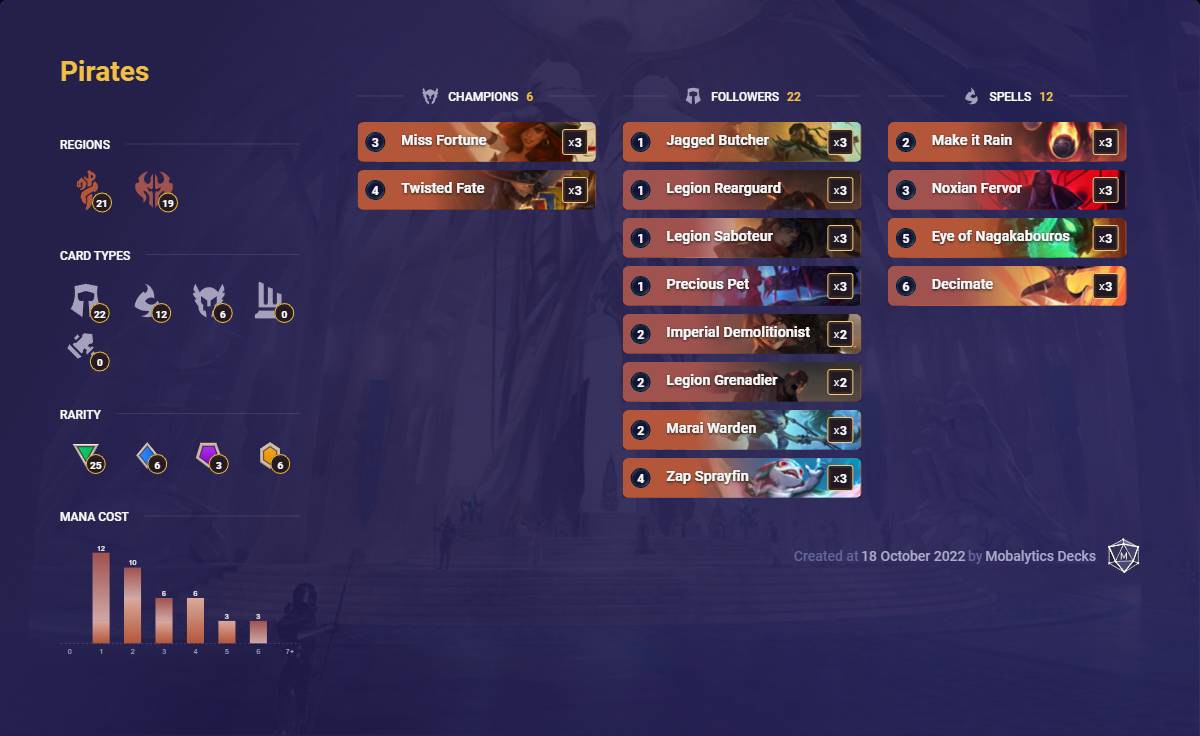 Classic Pirates is one of the most aggressive burn decks around, but with support from Eye of Nagakabouros, it can even outlast the typical aggro deck. ‎

The deck runs twelve 1-drops for a reason, so always mulligan to ensure you have one. Consider the matchup when prioritizing one over the other. Legion Rearguard is great against decks without 1-drops and can avoid 1 damage pings like Vile Feast. Precious Pet and Legion Saboteur are best against other units, as Pet can avoid blockers with Fearsome while Saboteur can trade while still pushing one damage. 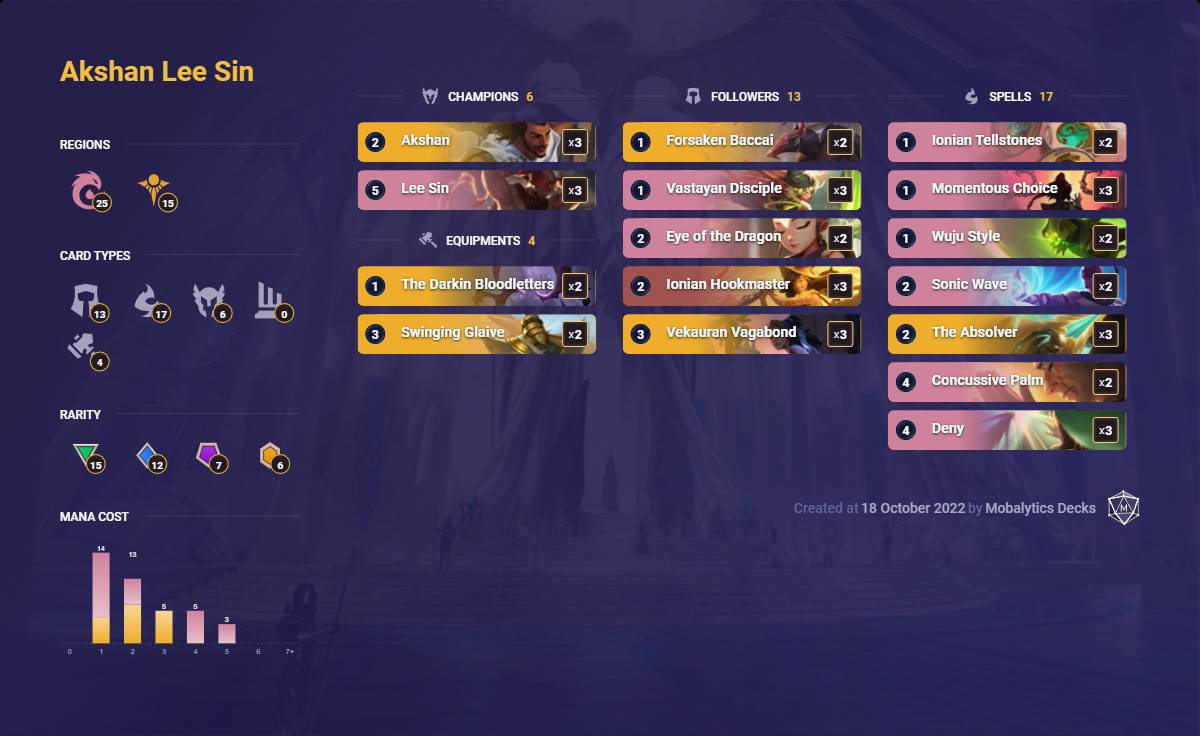 Akshan Lee Sin is a OTK deck that uses Absolver and Warlord’s Hoard to threaten a near-unstoppable combo kill. Utilize spells at the perfect time to punish and kick your opponent to victory!

Akshan is extremely important for the deck, so hard mulligan in order to find him. Vekauran Vagabond can be a reasonable Plan B if you’re unable to find him. 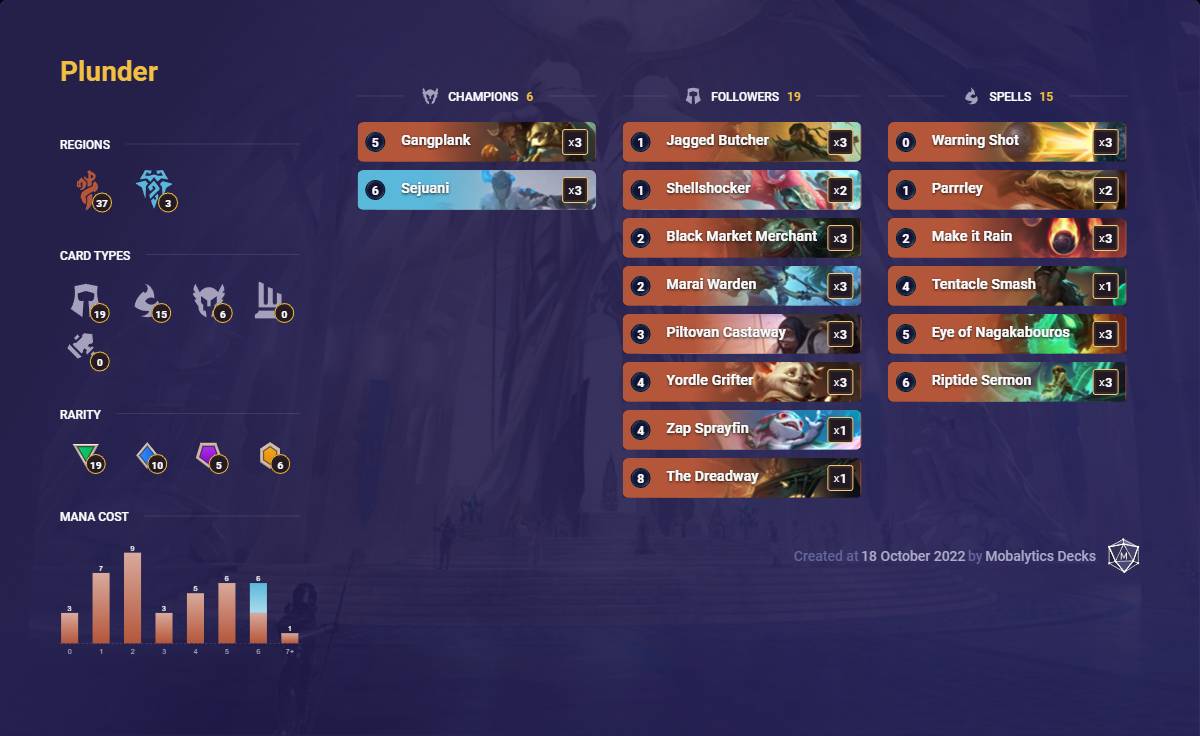 The classic Plunder archetype is a Bilgewater allegience deck that aims to deal damage to the enemy nexus each turn in order to level-up Gangplank and Sejuani. These are two of the strongest level two champions in the entire game, but they require a bit of work and planning. Nab adds an element of RNG to the deck, but adds potential for some cheeky plays like using the opponent’s own Deny against them!

Look for early plays that can kickstart the Plunder game plan. Warning Shot is a reasonable keep alongside cards like Jagged Butcher or Black Market Merchant. Shellshocker also pairs well with Parrrley to pick off one health enemies while still presenting a unit. 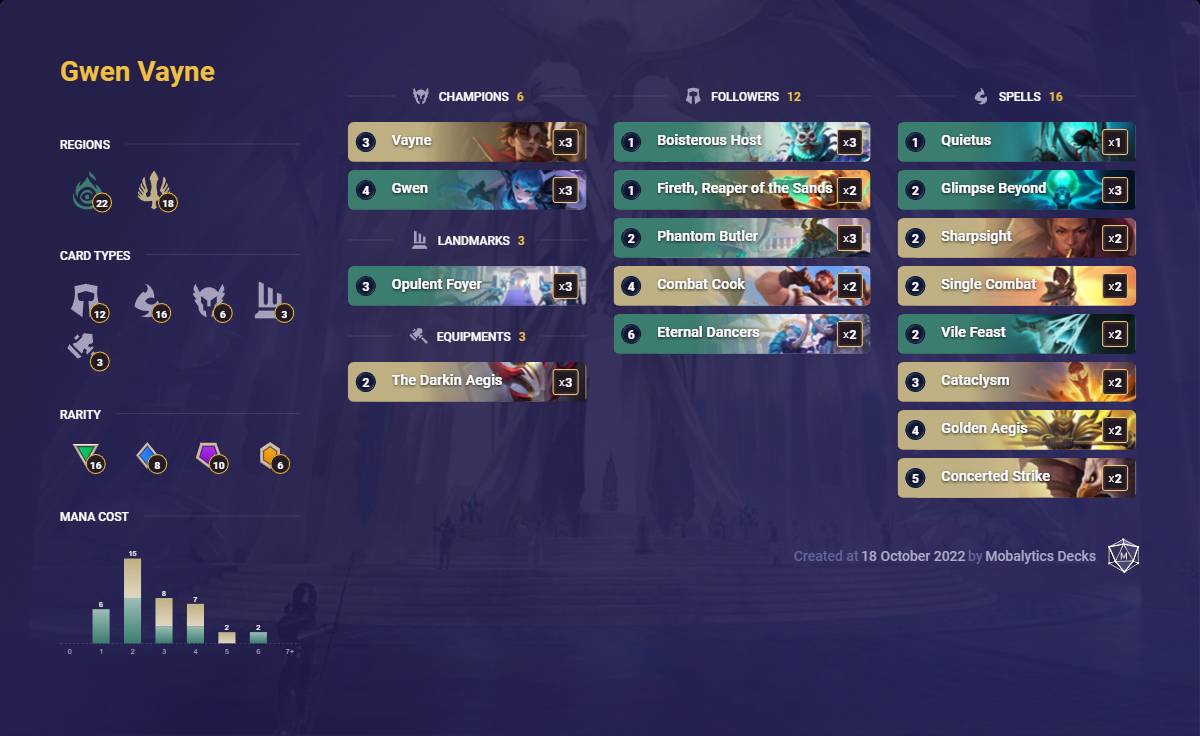 Gwen Vayne takes advantage of Rallies and free attacks to capitalize on Hallowed triggers. Gwen’s power grows incredibly fast, especially when you can stack it up multiple times per turn!

Look for early Hallowed units to start building up the buff. Both Gwen and Vayne are definite keeps to start applying major pressure to the board. 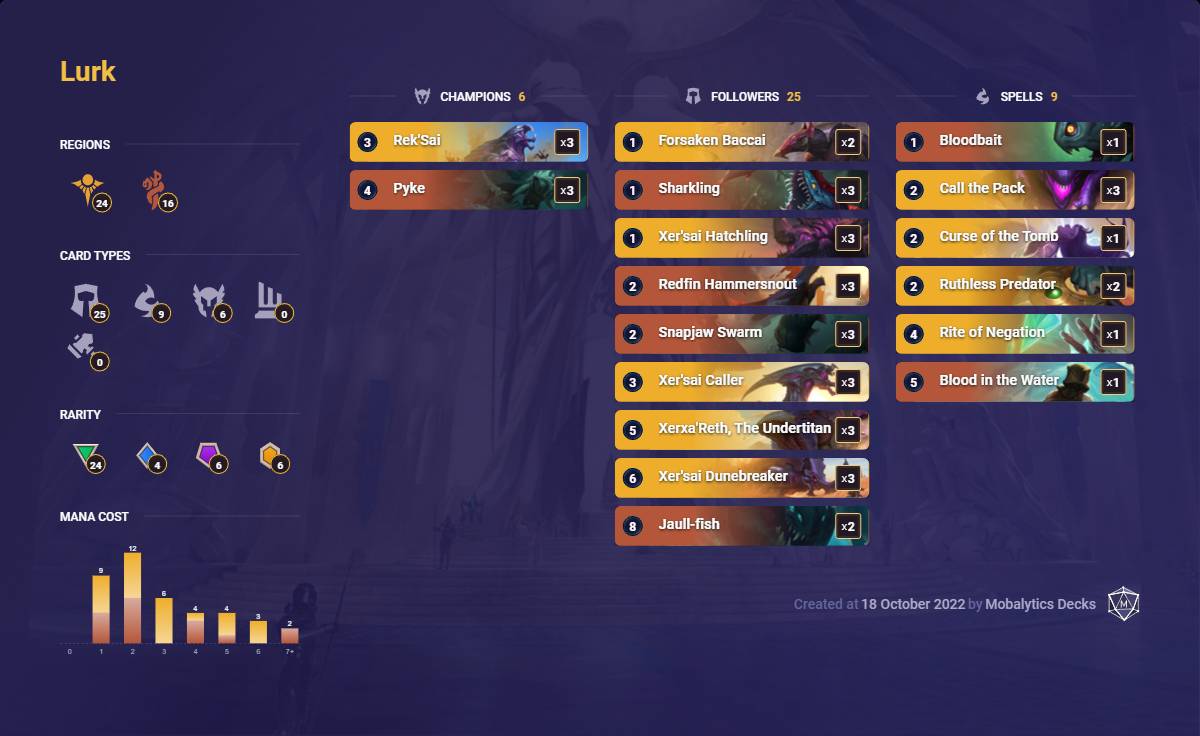 Lurk is centered around proccing the Lurk keyword as much as possible. It’s an archetype for players that like to attack and swing face with huge statted units.

We’re trying to trigger Lurk as much as possible so prioritize mulligan for a good early curve. 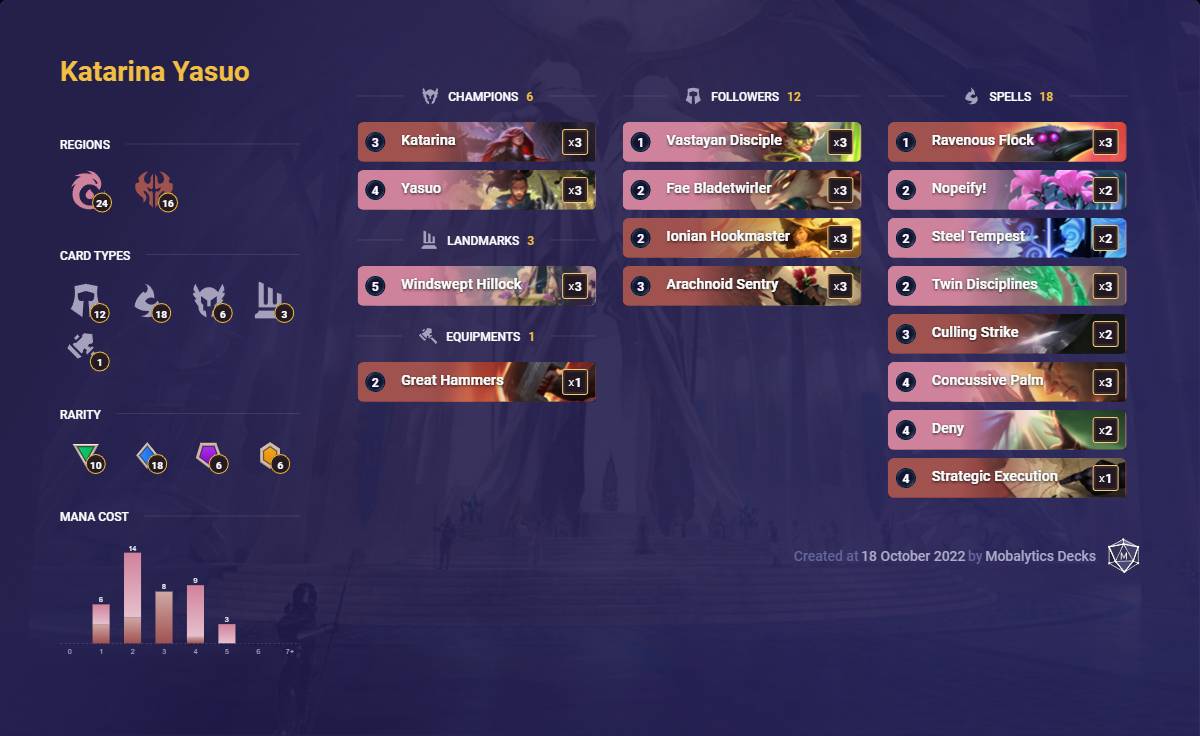 Katarina Yasuo is a deck that pops off once it has time to assemble its stun engine. Keep your enemies at bay with an arsenal of stuns, then strike right back at them!

Yasuo, Katarina, and Windswept Hillock are crucial pieces for the deck. These cards create a powerful engine, but it can take time to set up. Prioritize these cards, plus other early interaction such as the Sentry + Flock combo.

So there you have it! We’ll be updating the decks regularly so check back here. We also have our dedicated meta feature for LoR within our platform. See you next time.

Thanks for reading! To explore all the cards in LoR, check out our Card Gallery or jump straight into our Deck Builder if you already got some ideas from our article. Show us your best decks in the comments below.