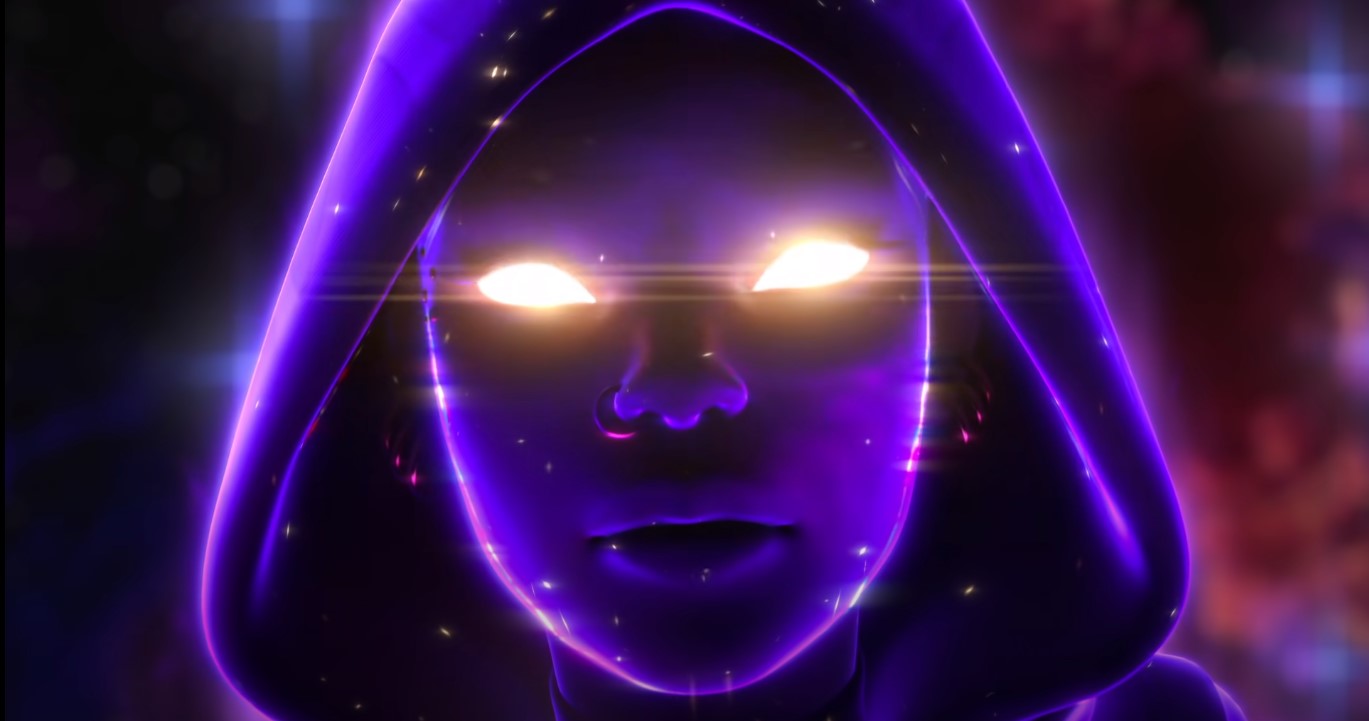 The 15th Valorant agent, Astra, is a controller who will be joining the roster during Act 2 Episode 2 on March 2nd.

She’s one of the most unique agents yet, not only thematically but also in terms of playstyle.

“Ghanian agent Astra harnesses the energies of the cosmos to reshape battlefields to her whim. With full command of her astral form and a talent for deep strategic foresight, she’s always eons ahead of her enemy’s next move.” – in-game agent description.

As soon as she’s released, we’ll update our site with her agent page and add him to our Valorant agent tier list.

But let me say that much as a preview for the coming update to the agent tier list:

S Tier seems to be the only fit for her considering her potential to basically replace all other Controllers in the current state of the game. At least in a team-oriented environment.

Whether Astra is going to be as popular in ranked matchmaking and especially solo queue is something we’ll have to observe in the coming weeks.

Because one thing is pretty safe to say: To unfold Astra’s full potential it is indispensable to have good communication and teamplay in your own ranks.

In the video below, you can see a quick look at all of Astra’s abilities.

Afterwards, we’ll cover each ability individually with more details for how they work and what potential use-cases could be for each ability.

All of Astras main abilities use a resource called Stars which she places on the map.

These Stars can be already placed while in warmup time and show to enemies only 2 seconds before the round starts.

This mechanic is meant to disable the opponents from already fully reacting to the placed Stars in the warmup time.

2 seconds before round start on the other hand are not enough to launch full rotations based on the information the placed Stars give but certainly enough to quickly make last-second calls on probable strats on the enemy’s side. 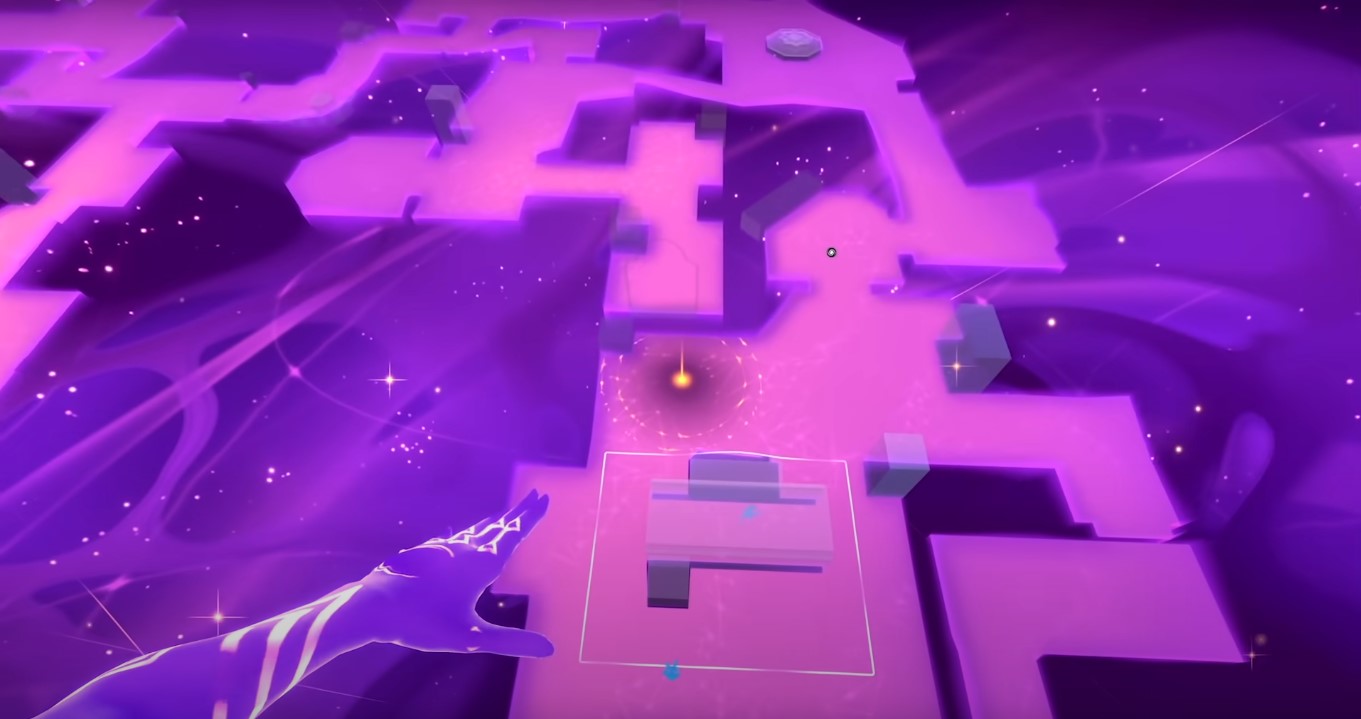 Once a Star is placed, she can choose to hover the star and then click on an ability to activate it.

In total, you have a maximum of 5 stars available to place and use them as either a smoke (Nebula), stun (Nova Pulse) or pulling (Gravity Well) ability.

In theory, you also could use every one of the 5 Stars for one ability. For example, you could smoke off an entrance 5 times over the course of the round.

Just consider the 14 seconds cooldown after you deployed two smokes.

Below, you can see the symbol that looks like an O with a tip on top, these represent the Stars.

Every round, she gets two Stars for free – the others cost 200 credits.

Stars are the only abilities that Astra has to pay for, the others are all cooldown-based (besides her ultimate which costs 7 points) and use her Stars as fuel in a sense.

After a Star is placed, Astra can choose to recall a Star (using F) and replace it in another area. Below, you can see the Stars recharging.

If you choose to recall a Star it triggers a short-lasting smoke that looks and acts exactly like Astra’s smoke ability, Nebula. However, this brief smoke fades away after approximately 2 seconds.

Stars additionally take some time to replenish after recalling and all Stars that are recalled are counted as used and will not be saved to the next round. So, handle them mindfully nonetheless.

Gravity Well creates a blackhole-like effect that pulls all players toward its center.

After a delay, it will burst, granting the Vulnerable debuff (receive 2x damage) to agents inside it. This is the same debuff you are also experiencing when getting in contact with Viper’s Snake Bite. 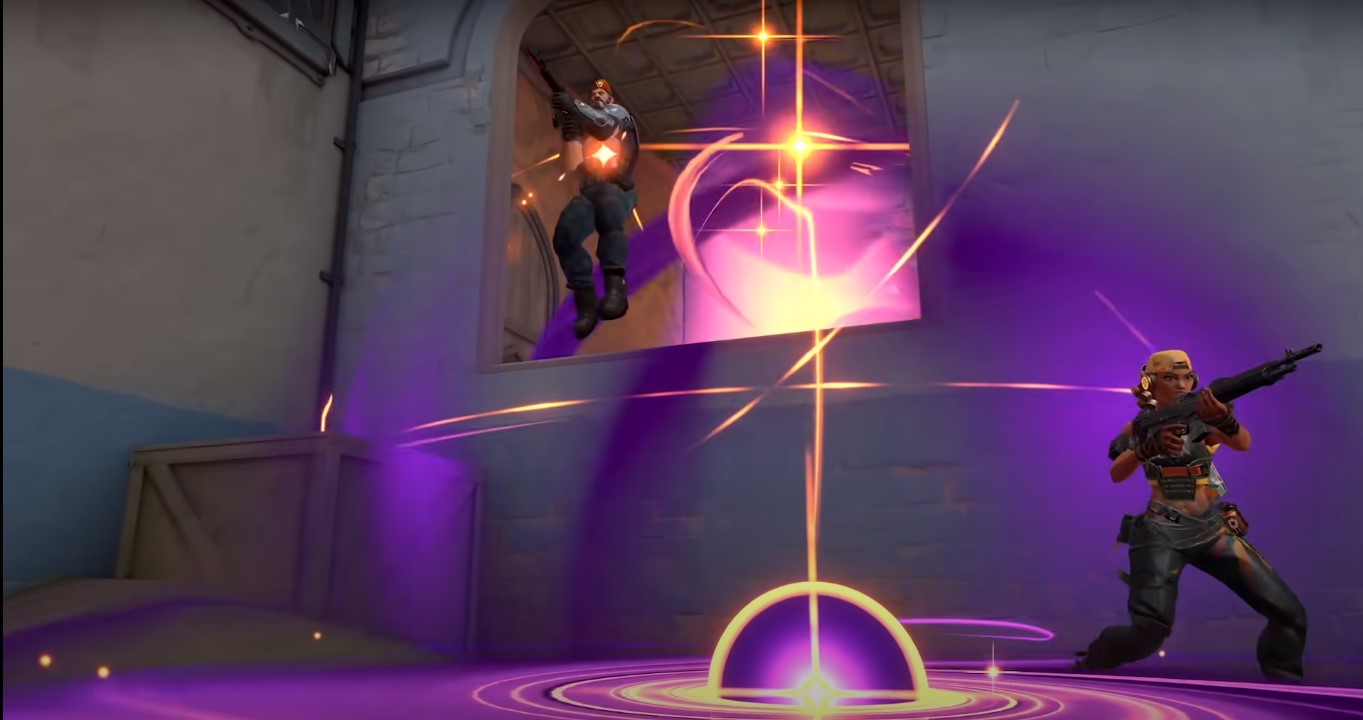 This ability will be useful for disrupting enemy movement and can be combined with other agents to create insanely effective combinations.

You can in fact escape the gravity pulling effect of this ability but it certainly creates a moderate distraction in Valorant’s already chaotic firefights and messes a lot with crosshair placement.

I’m sure the next weeks and months with this new agent will reveal many more great and unorthodox ideas to utilize Astra’s Gravity Well.

Astra’s Q, Nova Pulse, stuns all agents inside it after a brief delay. This can make it a great combination with Gravity Well as you can create your own wombo combo on your own.

Its effect looks like a large tornado effect, as you can see below. 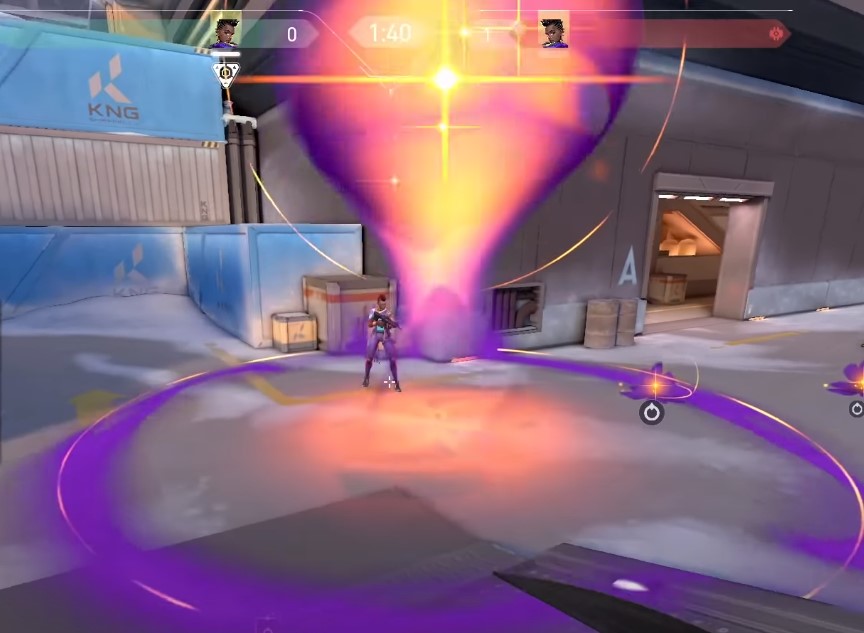 The ability has a pretty big radius and its effect is comparable to Breach’s E, Fault Line

Since all of Astra’s abilities are visible to the enemies, you can play an incredible mind game by placing your Stars the same every round but use them differently.

For example, if you turned you placed Star in a smoke the round before you can wait for enemy contact the next round and trigger her stun ability, Nova Pulse, when you know that enemies are in its range.

A lot is possible with Astra’s abilities and switching it up regarding the use and positions of the Stars will be of great importance whether you suck or succeed playing this complex agent.

As a controller, it’s natural that Astra would have smokes since the class is expected to help facilitate the battlefield from a macro perspective.

Astra is able to place up to two at once and they are sort of like bigger versions of Omen’s smokes since they are hollowed.

However, the shape of the smoke differentiates a bit: Nebula is slightly wider and more shallow in comparison to Omen’s Dark Cover, but this shouldn’t be enough of a difference to have a huge impact in game. 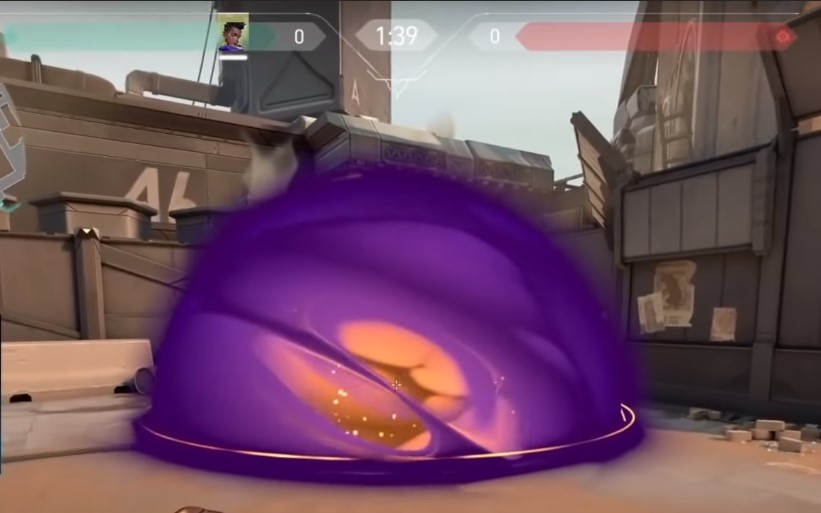 Astra is able to store up to 2 charges but she’s also able to recharge her smoking ability, Nebula, after a 14 second cooldown. You get back both charges after this cooldown.

Besides the short recharge duration and its overall stunning visuals, Astra’s smoke ability, Nebula, has no special features worth-mentioning.

As already mentioned, theoretically you are able to smoke off an entrance for basically the whole round since you can use all of your 5 available Stars for Nebulas and the recharge cooldown is only 14 seconds.

But the choice is yours and Astra’s ability set has a lot more to offer than just smokes.

Astra uses her ultimate button to see the map from her Astral Form and fly around to place her abilities.

Outside of that, she also had an ultimate, Cosmic Divide, which costs 7 orb points.

After a brief delay upon being cast, Cosmic Divide creates a huge wall across the map.

The wall blocks bullets and dampens sounds from the other side, but does allow abilities through. 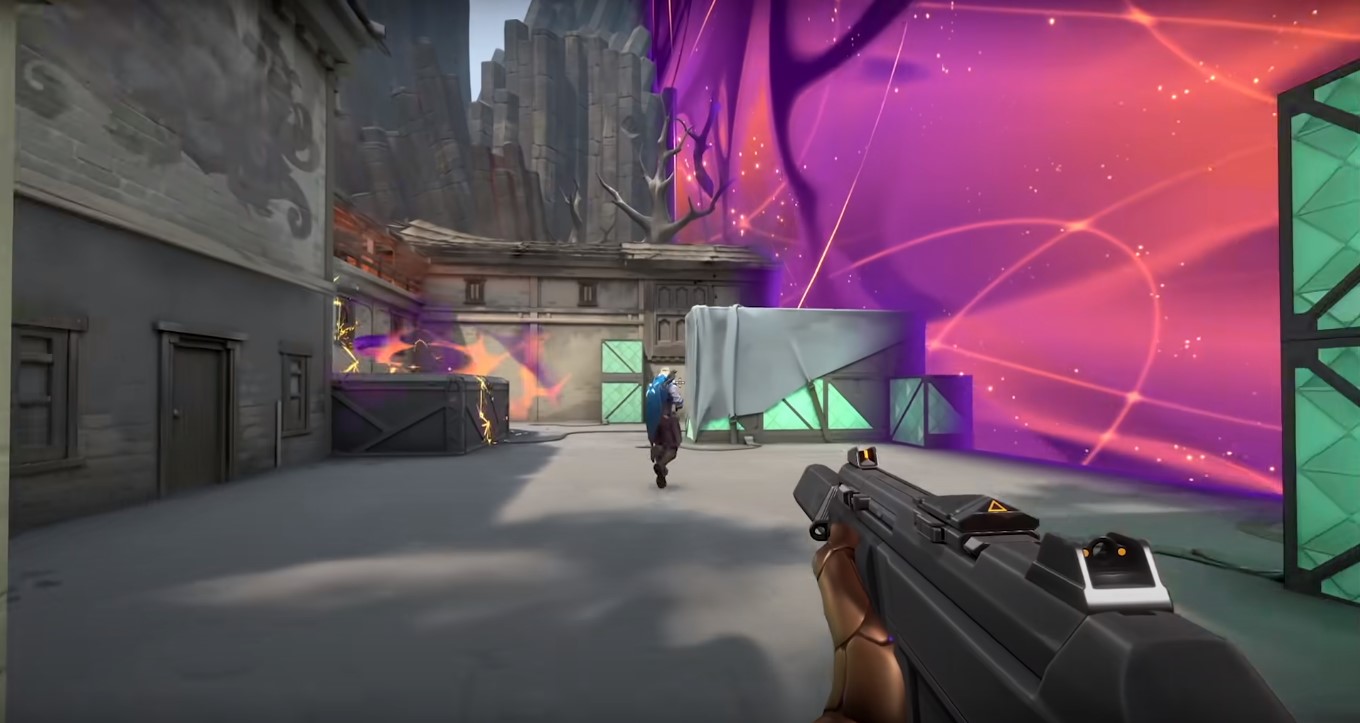 If you’ve ever played Overwatch, this is most easily compared to Symmetra’s ultimate.

It’ll be incredibly useful for situations like pushing onto a site on offense or playing retake on defense.

An interesting use-case which was already discovered is that you can use the teleporters on the map Bind without the enemies hearing you using it if you launched Astra’s ultimate prior to it.

The only thing you have to pay attention to is to completely cut off the enemies from the teleporter with your cosmic wall.

Thereby, no enemies are able to hear you using the teleporter unless they cross the barrier the ultimate creates.

The dampening and partially complete erasing of certain sound cues will be a main characteristic of Astra’s ultimate which teams are going to use for their own purposes for sure.

So, is Astra any good?

“Good” isn’t even a status Astra strives to achieve.

She low-key flexes with her abilities and style on all other Controllers currently in the game. 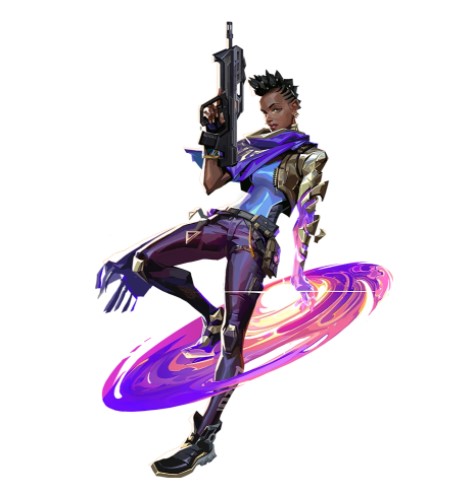 Omen and Brimstone will wish themselves back in the Beta when the world of Valorant was still comprehensible and one-dimensional. And let’s not talk about Viper.

But jokes aside, Astra is going to claim her spot in S Tier for sure. At least on a team-oriented level of Valorant and for most of the pro teams in all different regions.

We know we tend to over-hype new agents and their potential popularity within the community and pro scene. Nonetheless, the incredible range of Astra’s ability kit cannot be dismissed out of hand.

In addition to smokes without any range limitation, there is also a stunning ability and a gravitational pull in her kit which both can be really annoying for enemies when used right and also have a great combinational capability with other agents.

So, yes. Astra will probably meet the great expectations we had for the fourth Controller in Valorant.

Maybe in solo queue / ranked to a different extent as in pro play but she will find her niche in both environments.

All other Controllers besides Astra will have to prove their worth again after the new update.

The previously often seen must-picks of Omen on most maps are history for now and have to be evaluated again.

Astra will most likely not replace any other agents than those in the Controller class, though.

So, to adjust the current team comps to Astra’s liking you simply have to replace the current Controllers with her.

However, since you don’t have a flash to work with on your Controller (like with Omen), it is advised to include an agent into your lineup that has a flashing ability available (e.g. Breach or Skye).

This lineup for example would make sense for maps like Bind, Haven, and Ascent:

On the map Split on the other hand, Sova isn’t really a viable pick and therefore a slot is available for Raze to step in.

Especially afterplants could get very spicy with Astra, Killjoy and Raze all trying to hinder the defuser with their abilities:

Icebox was the only map on which Viper was a regularly seen pick as the main Controller.

If Astra indeed takes her place as well, a fitting agent comp would look like this:

A meta in which teams run a double Controller lineup (e.g. Astra + Omen) is unlikely as of now.