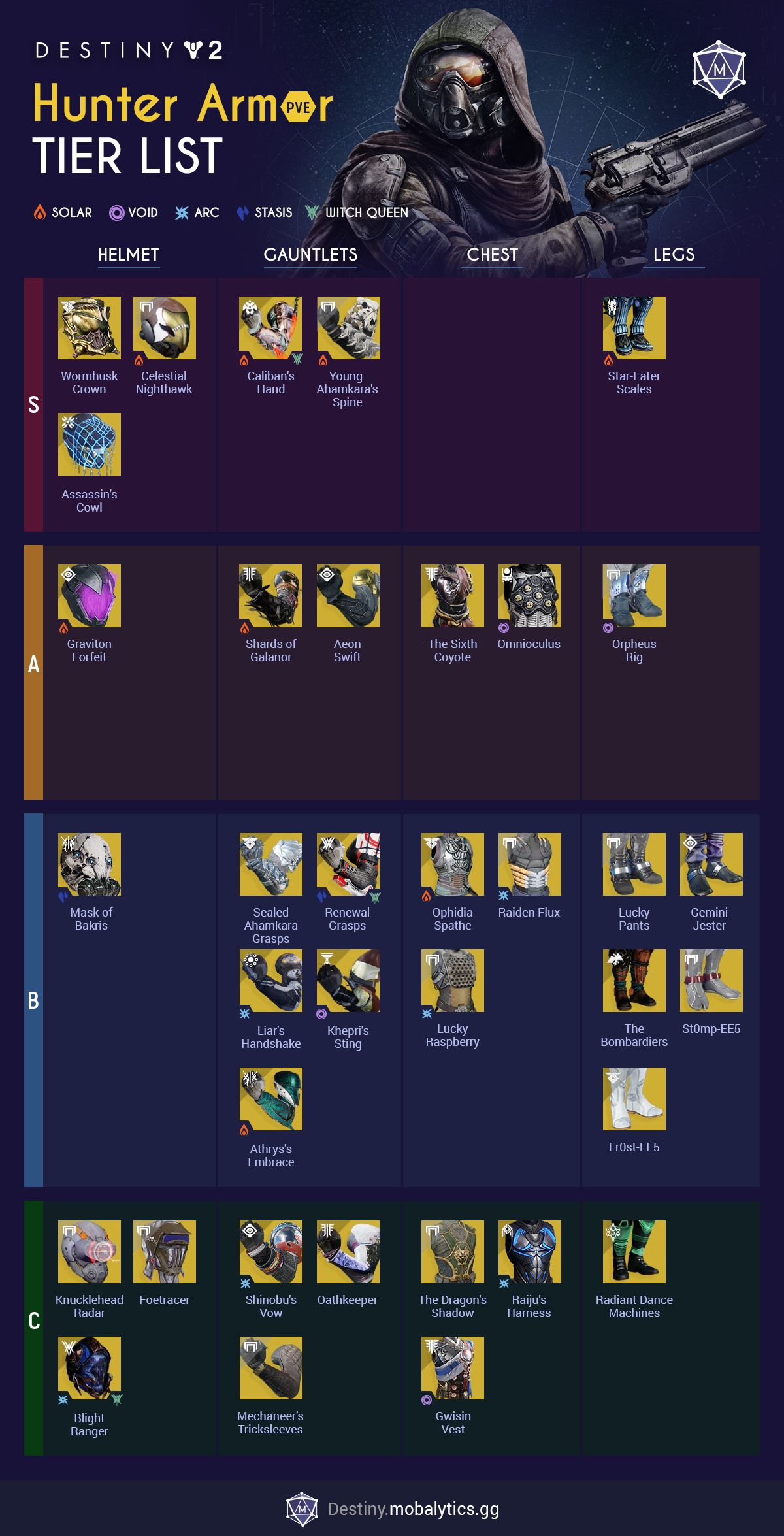 Similar to Wormhusk Crown that it gets you out of bad situations. The conditions are harder to meet, but the benefits are greater.

Great exotic to get out of a pinch by instantly giving health back.

With the solar subclass you get a knife back on kill. With this exotic and solar you get infinite knives that cause massive ignition damage if you get a kill with the knife.

A top offensive exotic that allows you to throw many tripmines with no worry of damaging yourself.

This exotic is the means to have the highest damage dealing super in the game.

Ensures you fully recover health due to the invisibility extended duration.

Not quite what Star-Eater Scales is, but is the next best option if you don’t have that exotic.

Solid option for reload and ability regeneration especially in content with champions active.

Allows you to be invisible essentially whenever you want and lessens the damage from stray shots or splash damage that may hit you when invisible.

Dodging gives a lot of benefits for hunters, this allows you to get them twice.

Increases the damage of Tether significantly and gives ability+super energy

The damage bonus is nice, but is rather limiting in that it is only applied to arc weapons or slowed/frozen targets.

Decent means to get some burst damage to higher health targets with a super charged weighted knife, but not enough to make it really worth it.

Pairs well with Quickfall as a melee will then make you invisible, but is tied to the smoke bomb charge.

At a time this was a high end damage exotic, but it has since fallen off.

Helps overall survivability, but is tied to a long grenade cooldown and there are better options for staying alive.

Throwing knives are good, but this exotic lost a lot of luster with the new Solar 3.0 rework that gives knives back on a kill, making 2 charges serve little purpose.

Stay tuned for Arc 3.0, but as of now arc staff is not a good DPS option.

The buff to damage is nice as it ranges from 60-600% increase, but it cannot be reactivated for 10 seconds after use which is a long downtime.

PvE enemies don’t have a radar, but they do get disoriented for 5 seconds which has some value. The range is limited though.

To get value out of the bomb you need to be in a position you probably shouldn’t be in the first place. The secondary effect based on subclass is a nice bonus.

These are good for jumping puzzles, and otherwise shouldn’t really be considered.

Getting ability energy back is nice, but there are many other passive means that don’t require you to perform an action that prevents you from dealing any damage which is the downside of sprinting.

There are very few opportunities to reflect projectiles. Far more consistent to use a high damaging super rather than relying on a target to shoot a projectile at you to bounce back.

Tracking a target through a wall isn’t worth an exotic slot with how immobile PvE enemies are.

Radar isn’t the most necessary thing in PvE. A Dreg sneaking up on you while you are ADS won’t be the difference between living and dying.

Check back after Arc 3.0, but as of now skip grenades are not the best option.

Limits you to use of sidearms which are fine, but the added bonus to the sidearms is not worth an exotic in PvE.

To maximize DPS, shoot as fast as possible. This exotic promotes the opposite.

The super this serves is not a good PvE option and this exotic does not boost it enough to make it a solid option.

Only buffs the defensive portion of your super, which isn’t worth an exotic.

These stats are essentially available with the new Solar 3.0 class, and aren’t too impactful in PvE play.

The extra dodges do not give effects activated on dodge, so with this exotic you are slightly more evasive, nothing more.