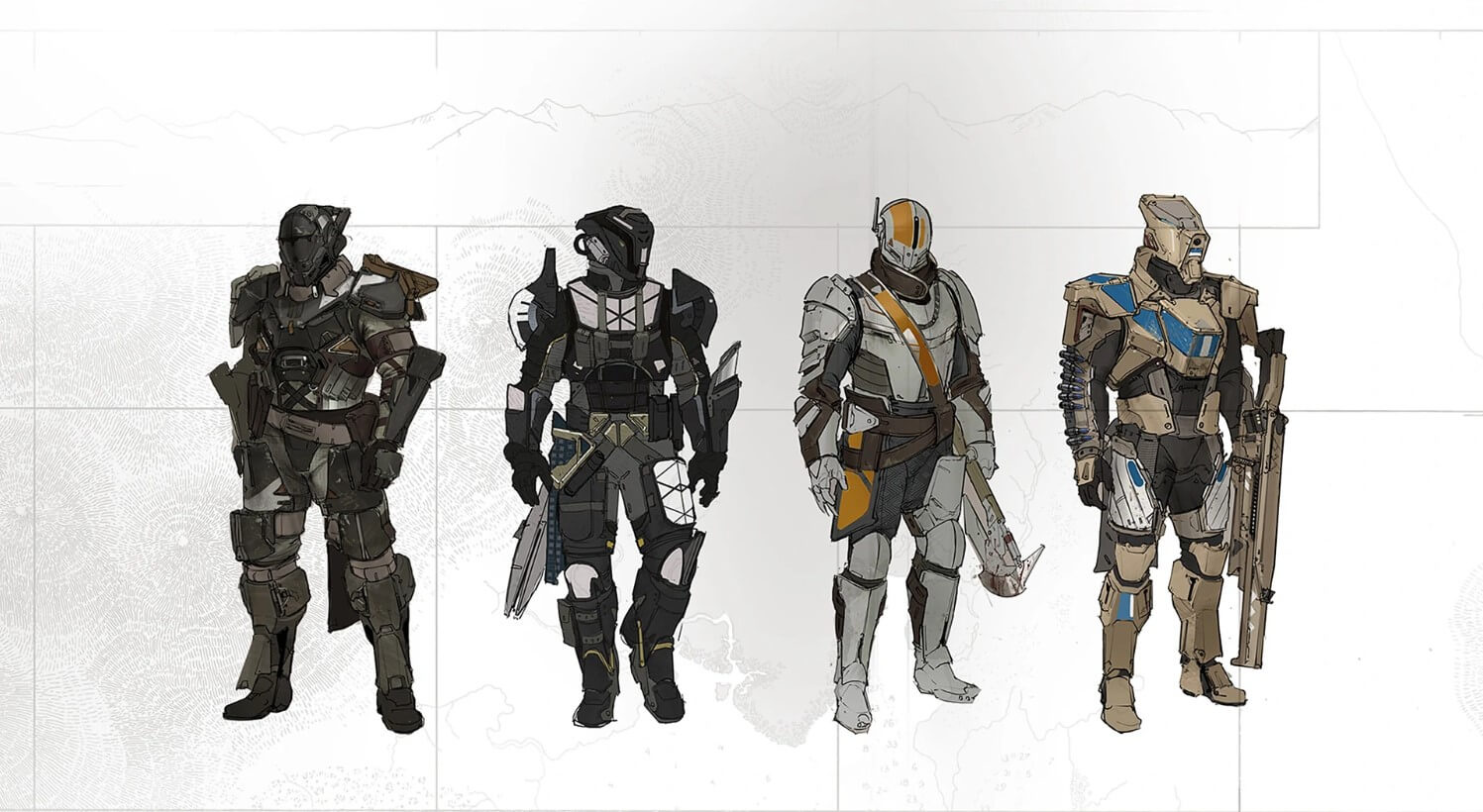 If you’re looking for a PVE Destiny 2 exotic armor tier list for Titan, you’ve come to the right place. 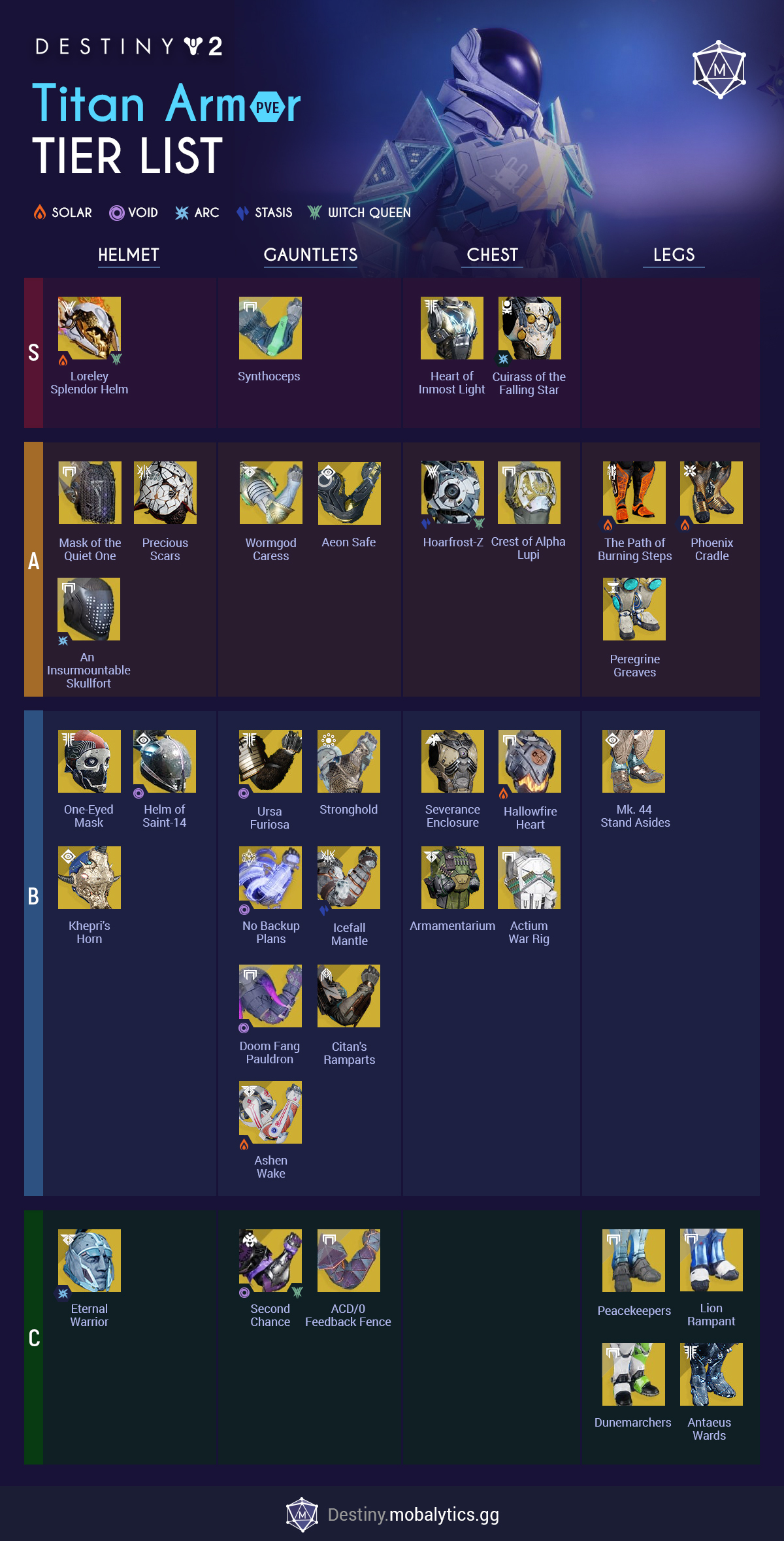 With this exotic and Solar 3.0, you actually have to try to get killed in a lot of the content across the game. It’s the best defensive exotic in the game and helps indirectly with ability regeneration via sunspots.

These synergize amazingly with Solar 3.0 Hammer Throw Titan and are a top means of DPS with Roaring Flames.

Great for getting abilities back and having them deal extra damage. High-end neutral game exotic that is usable for all classes here.

Cuirass of the Falling Star

Makes Thundercrash a top-tier damage super. This exotic can also be hot-swapped on just to use for a super if you want to be ideal with it.

There is already a lot of incentive to use weapons that match your subclass, this exotic really sweetens the deal. The revive shield is also a very nice bonus in more difficult content.

Mask of the Quiet One

This exotic doesn’t need a particular play style. It just has a decent defensive and offensive boost. Get abilities back a little sooner, and heal if you get a kill when low health, very easy.

A solid way to get health back against low-health enemies. Can very well become an S-tier exotic if Arc 3.0 has strong melee fragments.

Depending on the latest patch these may have some bug allowing you to deal 1 million damage to a target. When they are not broken they synergize quite well with some heavy melee builds and the new solar titan.

These have a lot of nice bonuses and can spawn special ammo for a team in raids for Izinagi ammo, increased damage, and spawn orbs.

Great for getting abilities back soon. With utility kickstart, you can loop these crystals on repeat for the most part.

Great support exotic here. Good for staying alive and keeping teammates alive as if you notice a teammate is getting hit you can use your barricade to heal them. The extra orb from super is a nice bonus in PvE, but by no means a big deal.

The Path of Burning Steps

You can pretty much just upkeep a 40% weapon damage buff with these. The buff stays active with a kill from any solar source. The damage isn’t on the same level as Synthoceps which is why it’s not S.

A good option for getting abilities back and keeping teammates alive with sunspots which are quite easy to make with a throwing hammer.

Can deal a lot of damage with these. Best with the enhanced version of One two Punch as it gives you enough time to get off the sprint-charged melee after a shotgun shot.

There are more consistent ways to get an overshield or health than this exotic in PvE.

The blast isn’t strong enough to warrant giving up the effects other exotics have on barricade cast. Solar energy kills giving back barricade energy is a nice bonus though.

You are already very tanky in a ward of dawn, there is very little need for extra defensive aspects to this already defensive super.

These were once a must-use in high-tier nightfalls until the amount of super you can gain back was capped to 50%. Still a solid situational exotic depending on the activity you are playing.

These are tied to melee cooldown and shotgun ammo, two things that are rather scarce. Also, shotguns are not in a great spot in PvE.

There is a conundrum with this exotic. In more difficult content the shield isn’t strong enough, and in easier content, the shield blocks a lot of damage but isn’t worth the loss in ability cooldown speed and movement speed.

These are nice to build super, especially with how long the cooldowns are in the current state of the game, but in today’s game ad clearing supers are not all to use as abilities and weapons can do it so effectively.

These have drawbacks with less barricade health and duration, but being able to shoot through it for safe damage is pretty good to have in some instances.

With Solar 3.0 these turn the game into fire baseball but don’t offer any damage boost nor enough cooldown refund on enemies that die to these in one hit to justify higher use.

Synergizes fairly well with Solar titan, but the explosions are quite underwhelming. There is a 4-second cooldown with it, and the damage and radius aren’t too great.

Very easy to play around with and gives rather quick cooldowns when your super is up. The issue are that this exotic is best when you don’t use super, applies only to solar which has a melee ability you can keep picking back up, and Heart of Inmost Light boxes it out.

Nothing crazy here, just an extra grenade. In general, you should be throwing your grenade mostly off cooldown so this exotic doesn’t get too much value.

Very easy exotic to play around with and goes great with Xenophage. The issue is that Xenophage isn’t the most optimal for DPS and auto rifles are by no means the best primary, but by no means terrible.

Gives a small shield and helps refund melee back, there are much better options for exotics built around melees.

A shield for a super with damage resist is hardly worth an exotic slot.

These need a second look. One extra shield toss is not worth an exotic.

I don’t advise letting enemies in PvE melee you as in more difficult content melees will one hit kill you.

SMGs are good in the meta, but this exotic is a glorified version of Auto-Loading Holster for SMGs.

Their only use is to put them on if you are struggling with a jumping puzzle, that’s basically it.

They can chain lightning for clearing out weak enemies, but there are much better options for doing that.

In PvE, there is a minimal utility with these. If you’re running around to slide in the middle of enemies in a GM nightfall you’re probably not doing too well.