Welcome to our Valorant patch breakdown! We’ll be discussing all the buffs, nerfs, and adjustments related to agents, guns, maps, and more for every patch.

Massive changes are hitting VALORANT this patch and much of the community are very excited about it. One of the biggest talking points is the Yoru rework going live, he is expected to finally be a viable duelist pick in both ranked and pro play.

Second to this is the Astra nerfs which are understandable and deserved since she has been far stronger than other controllers for a long time now. The controller meta was feeling a bit out of whack with Astra dominating all non Viper maps.

The buffs that Brimstone and Omen are receiving combined with the Astra and Viper nerfs should level out the playing field between controllers and make bring back Omen and Brimstone into the meta. 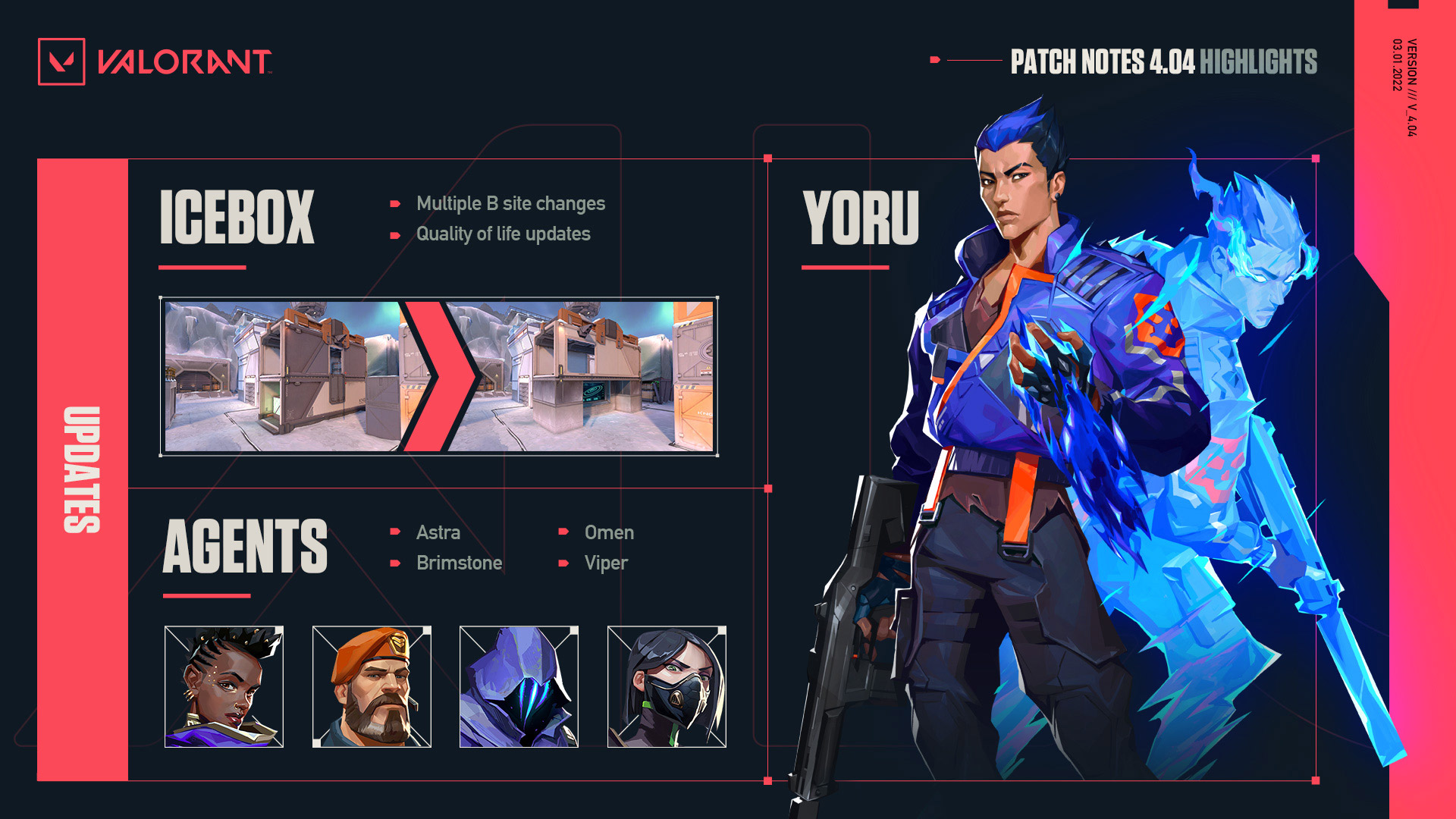 There is a lot to cover in this patch including some serious quality of life changes for the map Icebox, so let’s dive right into it all. 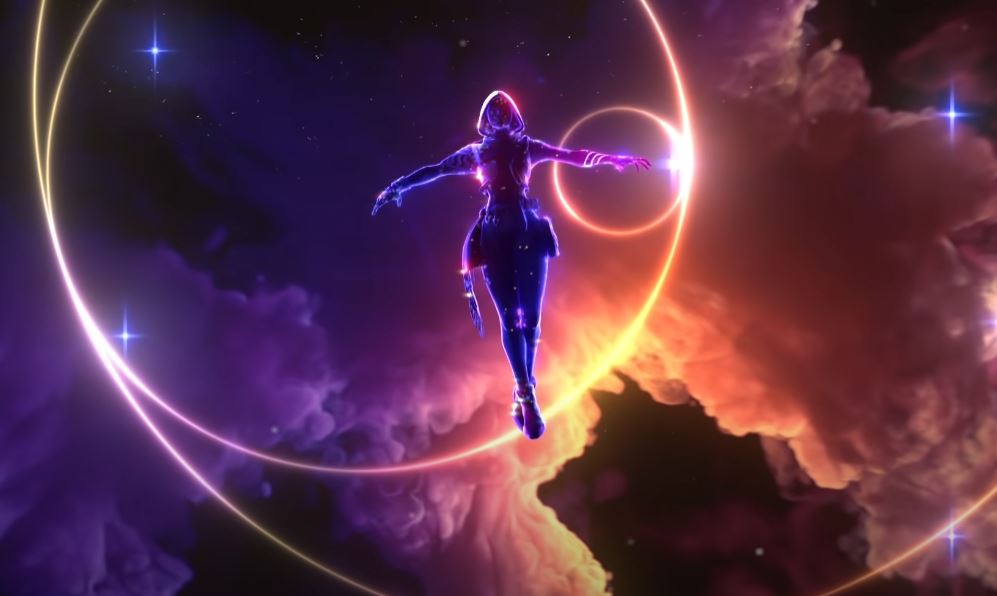 For such a long time, Astra could simply outperform Omen and Brimstone by impacting the map in ways that they couldn’t come close to replicating.

There were a few major problems regarding Astra’s power as a Controller. Firstly, her ability to smoke the map was far superior to her counterparts. She has been able to dissipate smokes and fake them, create patterns of play with her stars, smoke any region of the map with ease, and by the time a smoke vanishes her timer would be back up for her to re-smoke almost immediately.

Moreover, her ability to make coordinated plays with her team using the Gravity Well and Nova Pulse ended up being far more impactful than Stim Beacons and Shrouded Steps, especially in higher elo.

Considering this, the entirety of her kit is receiving adjustments and is being tuned down.

Astra’s impact felt pervasive round to round as she could make round-winning plays for her team with well-worked stars. Reducing her overall number of stars as well as the cooldown for dissipating her star will now force players to be much more prudent and deliberate when it comes to star placement.

A lot of the time stars on the ground were simply an intimidation technique and functioned like a deterrent to enemies, I think we will see this less since she will have to wait much longer to use them after recalling.

Her staple ability, this is Astra’s bread and butter, using a Gravity well multiple times throughout the round was kind of overpowered.

It set up plays for her teammates to capitalize and fight vulnerable opponents, and or cleared significant chokepoints and corners for her team to advance.

The fact that its cooldown timer has almost doubled means that she will maybe only have a single opportunity throughout the round to use this ability as opposed to the usual two.

Astra will have to wait a bit longer before being able to re-smoke choke points. Prior to this she could almost instantly re-smoke areas, so the fact that this opens up a small window for the enemy to work around her smokes is a fair decision.

A few other quality of life changes for Astra

Omen is back in control 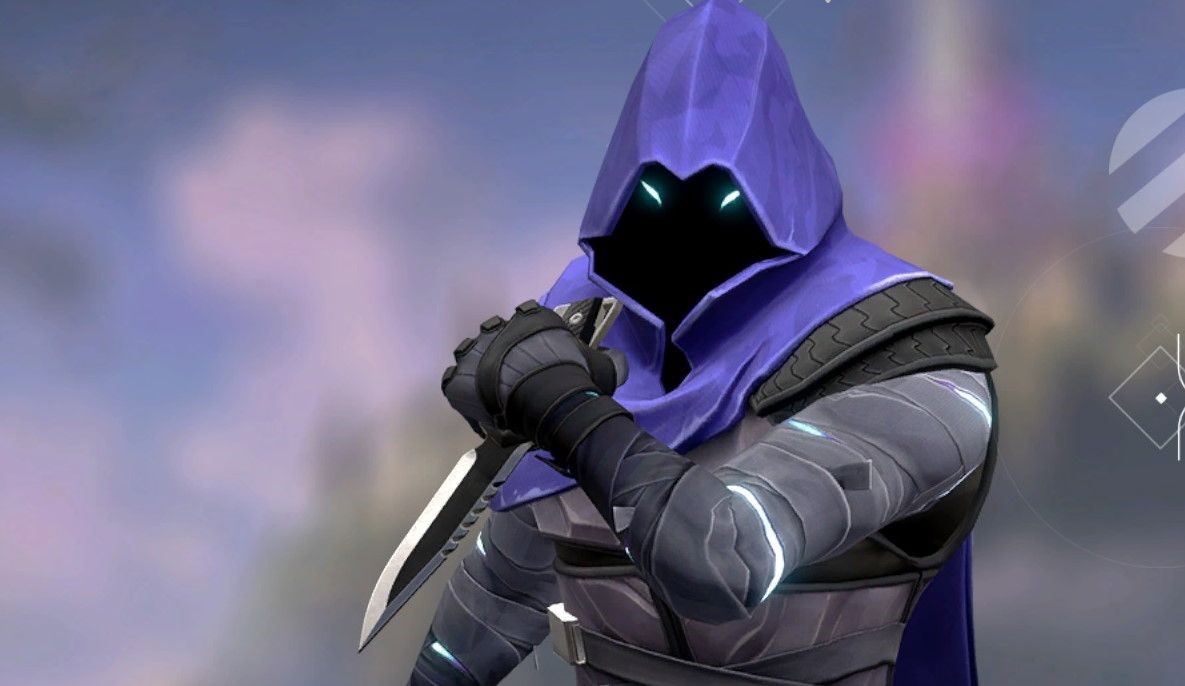 Riot have reverted the nerfs that hit his Dark Cover long ago. The cooldown decrease is going to allow him to use his smokes without stressing too much about his lack of capability to re-smoke since this is no longer as big of a problem.

This small buff towards Shrouded Step allows him to use his short-range teleport in a slightly more swift manner and may just allow him to catch opponents off guard a bit easier.

Brimstone back in action 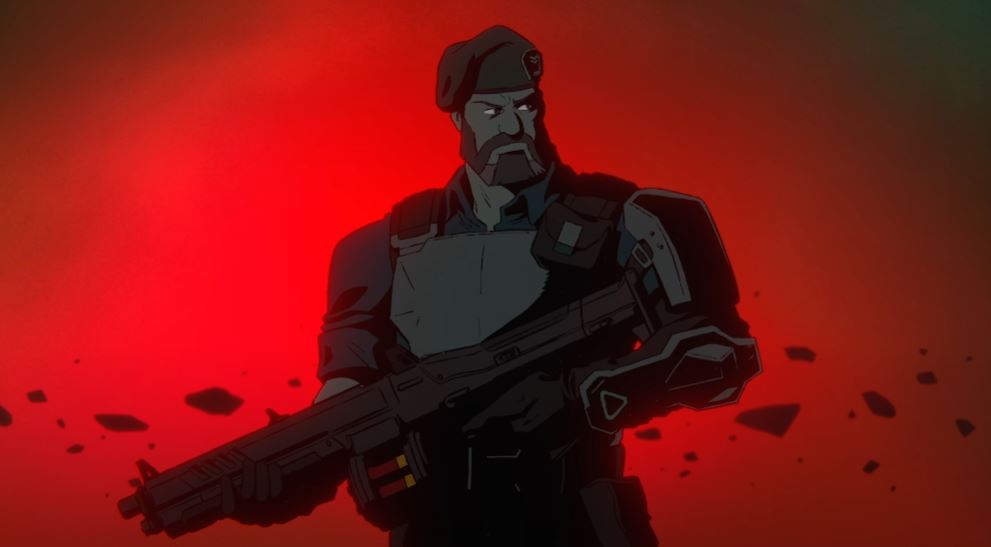 The deploy radius is going to help Brimstone a lot, especially on defensive rounds when it comes to smoking the side of the map furthest from where he is playing.

Usually, if playing Haven, Bind, Split or Ascent he would have to play close to mid to be able to smoke both sides with ease.

With this increase in deploy radius, he will be able to support anchors on-site and allow other more suitable agents to play mid and use their utility there. I.e. Initiators and or Sage for Split etc.

This is a great buff to see since his Stim Beacon was one of the worst and least impactful abilities in the game.

The speed boost might really be a valuable tool on attacker rounds and when used on duelists to help them entry, especially Neon.

It also will allow him and his teammates to rotate (and traverse the map in general) 15% faster.

Mask off Viper, there are new dilemmas to face

Viper players have to be careful when managing their fuel levels now and quite often will have to choose between their wall and their orb.

On B site Breeze, Viper could control the entirety of B Main alongside mid with the wall and orb, now they will have to be a bit more judicious when using these abilities.

There will certainly be more opportunities for enemies to work around mid and B on maps like Breeze when attacking.

Will Yoru leap-frog to the top of the tier list with this drastic rework?

Enemies within the cone of the explosion are flashed

Not only does Yoru receive a massive buff towards his Fakeout ability which was previously just a bunch of measly footsteps, but it is in another way an additional flash ability.

It forces his opponents to pay attention to it to try to discern whether it is the real Yoru or not. It is a seriously deceiving ability since the real Yoru can create patterns of play by using his Fakeout in one way over and over again until he decides to one round pretend to be the Fakeout clone himself, (after he has conditioned the opponents to believe he is just juking them out.)

One important consideration is that Yoru’s Fakeout clone will not pop up on the HUD map and this will alert enemies as to whether it is him or not.

I do think that this should be hot-fixed/altered as higher elo players who are comfortable at quickly glancing at their minimaps will be able to pick up on whether it is the real Yoru or not.

Upon activating a fake teleport, the beacon creates a small decal on the floor for 30 seconds to indicate location of the fake teleport

The fact that Yoru can now fake his teleport adds a whole new layer of deception and trickery to his gameplay. It is such a simple addition to his kit yet it feels so natural and right, it is going to allow him to make plenty of plays with false audio queues.

Yoru’s rework has been long-awaited and all of these additions are going to make him very tricky to play against, literally, he will have a much easier time tricking enemies and finding success in his role as a self-sufficient fragger with this new upgraded kit.

For more commentary around Yoru’s rework, head over to our previous article that has a comparative discussion around the old and new Yoru.

There are quite a few changes to Icebox this patch and it is going to take some time for the community to get used to these.

The most significant and noticeable differences can be seen all around B site.

Here are a few images that showcase the major talking points. 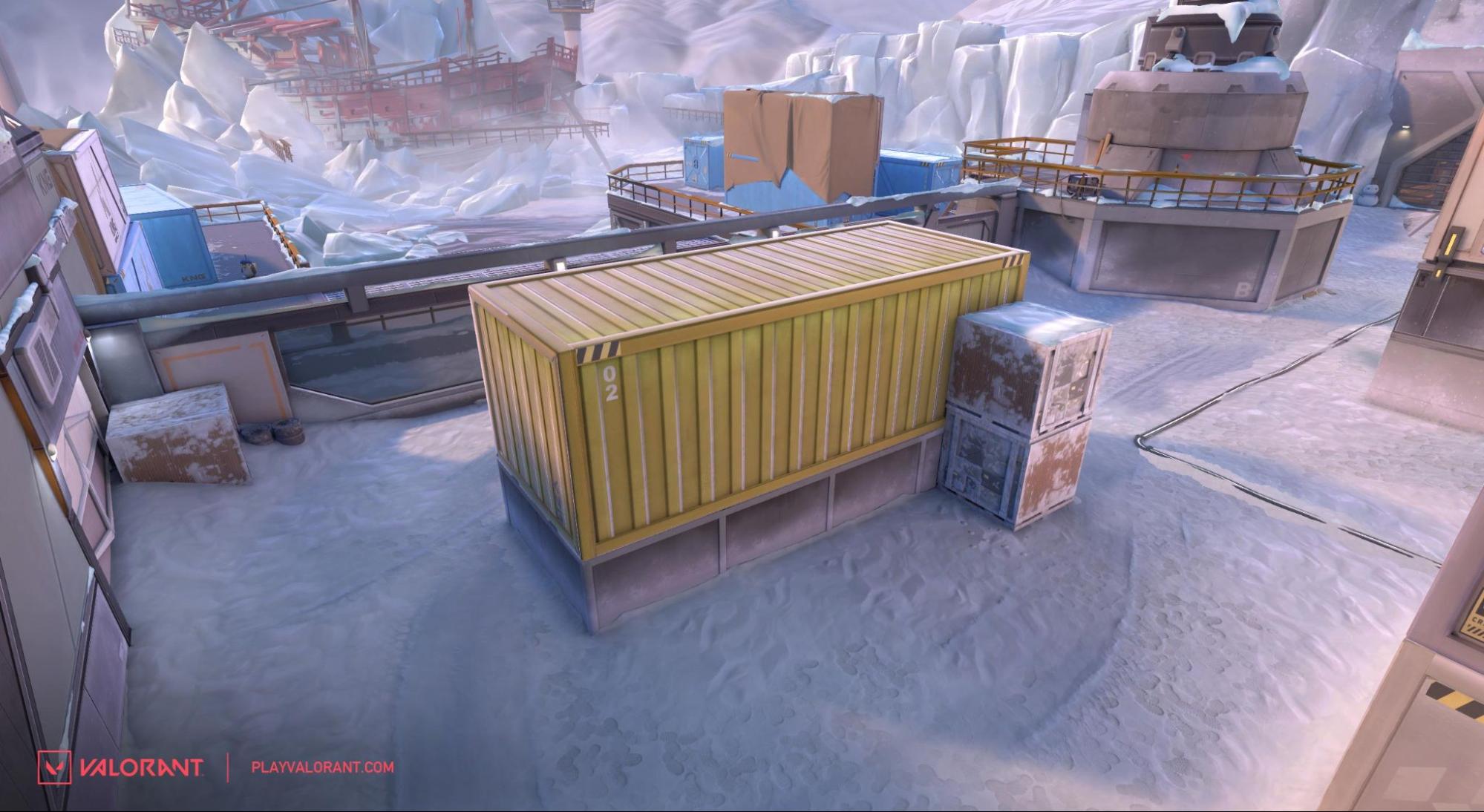 The entire B half of the map is receiving a revision in its design all the way from the area up at Snowman near defender side, up to the B Main Attacker Side Garage. 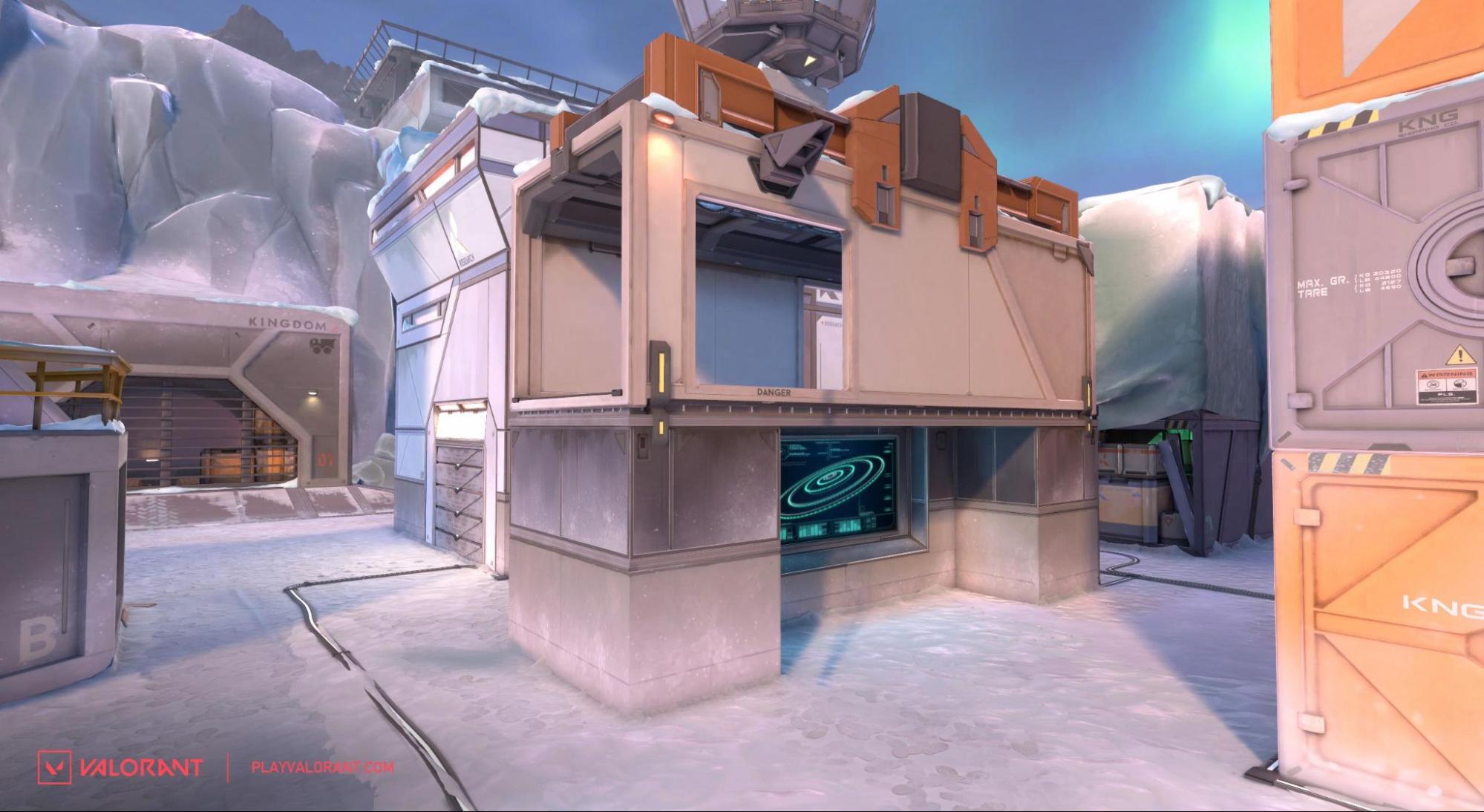 Most noticeably, there is a lot more cover around B Site both, from Snowman to Mid Orange, and throughout Yellow and also Garage. Lines of sight in these areas are not so vast and long anymore and there are a lot of new angles being introduced to this side of the map whilst also a lot of common long range angles being removed. Since the release of Icebox it has felt as though attacker favoritism has existed for A Site. 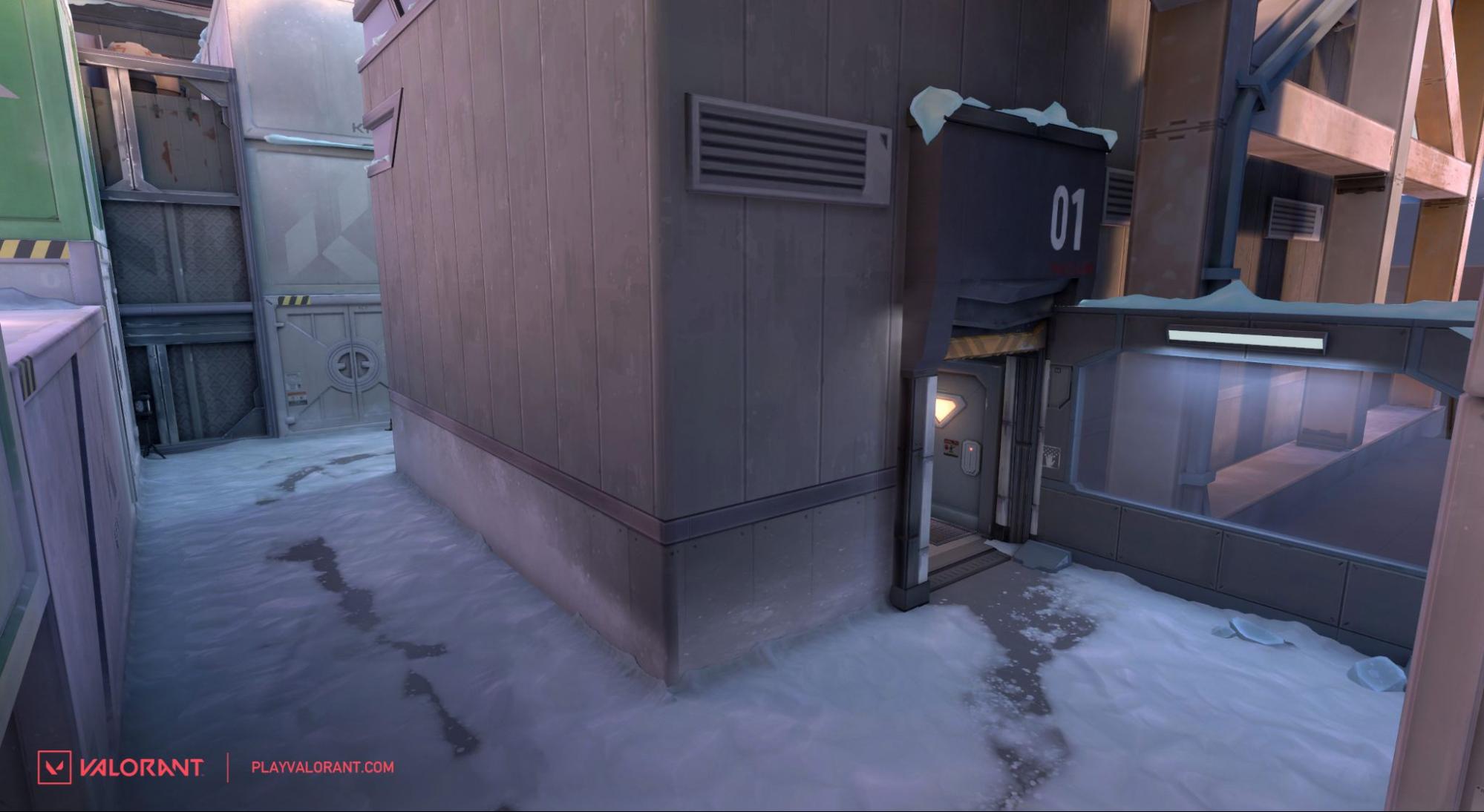 It felt like attacking B Site was almost tokenistic in nature just to mix things up and catch opponent defenders off guard. It did feel a fair bit easier and more straightforward when attacking A Site when comparing it to B Site. The old Icebox B site only really offered Yellow and Green for attackers to hold down their positions.

The mid double-decker nest area was very awkward to hold in post-plant situations as it was a hollow rectangle that was very exposed. Now it is very blocky and offers a lot of impenetrable cover so it looks like there will be a lot more opportunity for attackers to play closer towards the bomb.

There are lots of little tweaks for Icebox, even in the mid map region and A site there have been a few adjustments so head over to the official patch notes for all the details around this.

This is one of the largest patches to hit Valorant yet but so far the initial reaction from the community is very positive.

Praise is noticeable across social media sites like Twitter as much of the playerbase joke and tease Astra mains for losing their position at the top of the agent hierarchy whilst being excited to see the meta refreshed with agents that have been left in the dust for a long time.

Hopefully, the Brimstone, Omen and Yoru changes lead to their pick rates increasing. Maybe we will even start to see these agents shine in upcoming professional matches.

It is reinvigorating to see Riot devs making an effort to address imbalances in the game both from an agent and map standpoint, personally I am looking forward to testing out all these changes in Act 2.

That is all for now, as always, good luck in your ranked climb.

That concludes our Valorant patch breakdown for 4.04! Be sure to check out to see how these changes affected our Valorant agent tier list.