How to Play Rell (Abilities, Runes, and Tips)

Rell Guide: How to Play Rell

Rell is hitting Summoners Rift in Patch 10.25. She is a tanky Support who offers her allies additional tanky stats and added protection. She has lots of CC and many unique abilities.

In this Mobalytics guide, we will talk about how you can play as Rell in the bottom lane. If you want to know more tips on how to play as Rell, learn her build and who counters/gets countered by Rell, make sure you check out our Rell Champion Page.

Before we begin, let’s make it clear that although I have been testing Rell on PBE, this guide isn’t intended to be an in-depth-everything you need to know, one-stop-shop on how to play Rell. Its intention is to give you tools and tips to help you play her once she launches.

First off, we should discuss what her abilities are. Since this is based on the PBE, these won’t instantly make you an expert but we will go over the basics of each of her abilities to get you started if you want to play her for the first time.

Also, note that these numbers are of course subject to change when she officially launches.

TLDR: When she autos a champion, she will steal some of the enemies defensive stats. She can steal multiple enemies and minions armor and magic resistance at the same time. Her basic attacks will also deal bonus damage.

Rell thrusts her lance in a selective direction, destroying the enemies shield before dealing damage. The first target hit applies her passive, and the damage to enemies after the first is reduced.

If Rell is tethered to an ally with her E, she and the ally will gain a heal.

TLDR: Her Q deals damage, destroys shields and will heal her ally if she is bound to someone.

Rell’s W – Mount Up and Crash Down

When she is dismounted, she is very slow but gains armor and magic resistance. When this ability is activated, she mounts up gaining movement speed briefly which is increased if she is running towards an enemy champion. Her next attack during the duration throws her target behind her dealing damage. 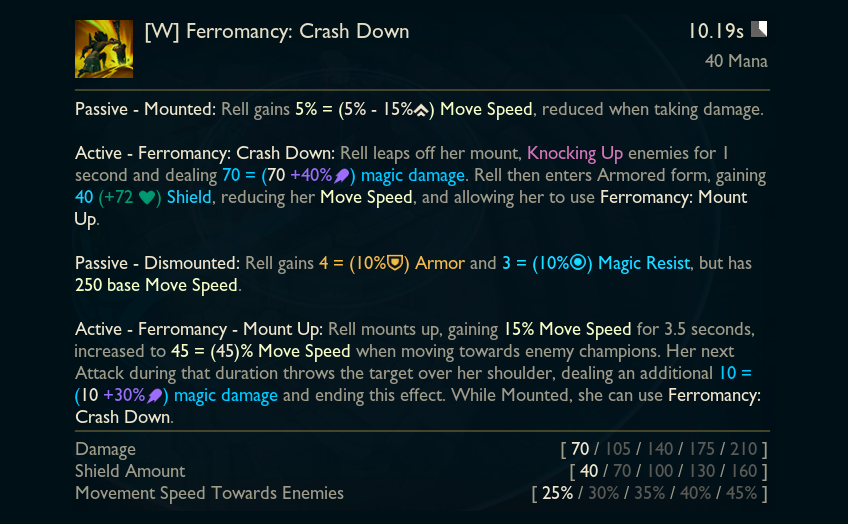 Passive: Rell can tether herself to an ally. While the tether lasts, her ally gains bonus armor and magic resistance.

Active: When she activates this ability, she binds herself to a champion. She can then recast this while the tether is still up and running.

Recast: Rell erupts the tether to deal damage to all enemies between and near her bound ally. She stuns everyone hit for 1 second.

TLDR: She can tether herself to an ally who then gains bonus defensive stats. She can recast this ability to stun any champions in between/around the ally.

TLDR: She gains a large AOE pull that brings enemies closer to her continuously for a couple of seconds.

Lots of testing and preparation was done on the PBE to provide the best runes for Rell on the 1st day of launch. Unfortunately, not every player has access to PBE so the best rune set up may not be found yet.

Take note that we will be constantly updating her rune pages in this guide, so check back every so often to see *potential* new runes for her. Check out Rell’s champion page to see the latest recommended runes and builds. Or get her rune and builds directly imported into your client within the Mobalytics app. 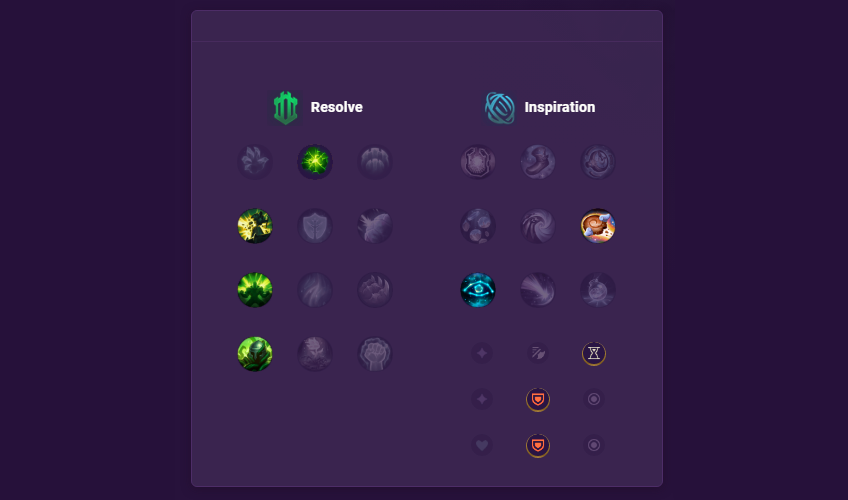 This rune page is a standard tank page. You could take alternative secondary Runes such as Sorcery with Manaflow Band and Transcendence if you wish. You could also adjust your minor runes depending on the matchup (take MR vs AP Supports etc).

DISCLAIMER: These are TEST builds and we will be updating the builds frequently once she is released. 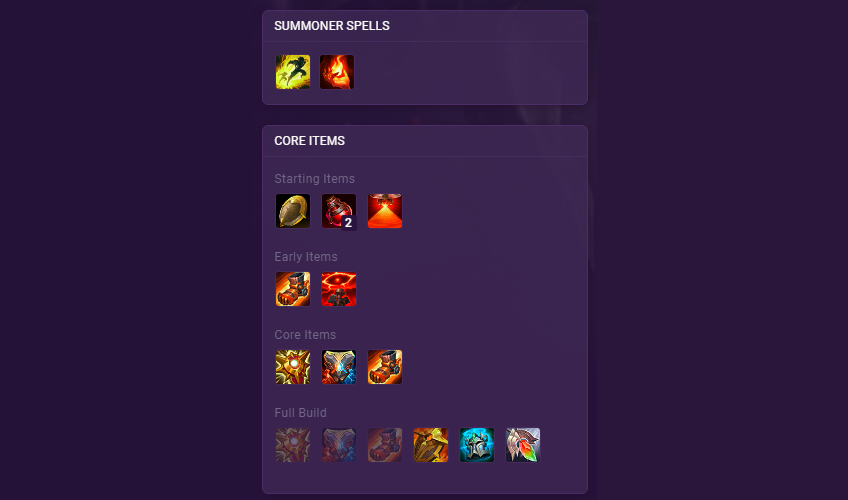 Currently, we have two different builds for Rell on our Rell champion page. As you can see, each of them builds items that offer her defensive stats and health. These are key items to make Rell tanky and allow her to be the frontline or peel machine for her team. 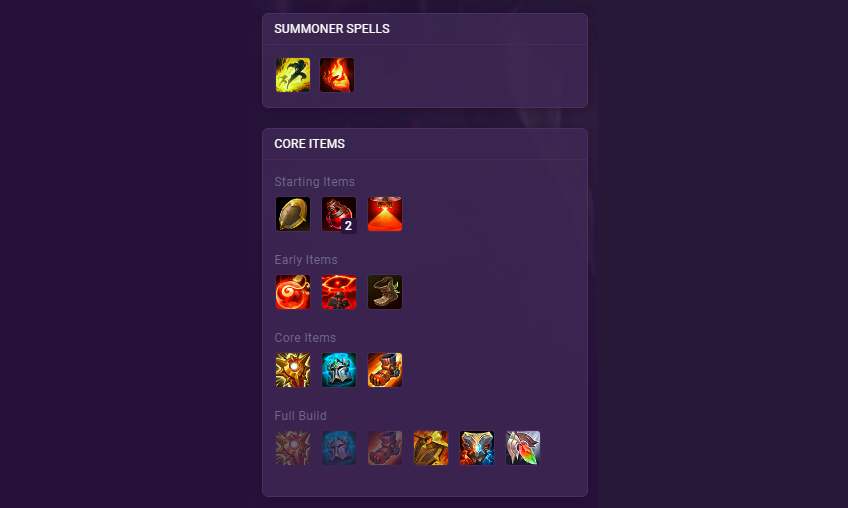 Try each of them out and see which one you prefer. Both are rather good regardless of the ADC or APC you have.

How to team fight as Rell

Team fighting for Rell is like many other tank Supports. She may wish to go in to look for an aggressive play with her E and then use her Ultimate to pull the enemies towards her team. Just like all other tank Supports, she will want to go in and then fall back and peel for her carries. It’s not advised to pull incredibly strong enemies like Darius or Renekton into her ADC if the enemy is fed.

Her Ultimate is very versatile. You can use it as an aggressive tool to pick players off, or you can use it as a utility tool to peel for your ADC and keep the enemy frontline away from them. It is a very diverse tool which can be used in a plethora of ways.

Try out different team fighting techniques when playing Rell to see which suits your and her playstyle.

It’s going to be obvious that the best build for Rell has not been found yet. While we’ve done our research, other creators have done their research and while tons of videos have been made already, let’s face it, theres no best build for her yet.

This isn’t exactly a tip on how to play Rell, but more word of advice. Do your own research and try out unique and different setups for her. We will be updating this guide frequently at launch, so you’ll probably have to adjust your rune setup if you’ve read this guide early on.

Don’t play her in ranked yet

It’s the preseason so no one cares about ranked right? Well, that’s half true. With LP gains sucking harder than TSM at Worlds in 2020, there’s no point in playing ranked right now! Even Riot said it themselves!

While LP doesn’t matter anymore and while your rank has been locked in for Season 10, players are still playing ranked, albeit with (what feels like) less effort on everyone’s part. It’s better for you to play Rell in normal games rather than in play her in ranked so you can practice her. Once you have more practice on her, you can take advantage of her and bring her into ranked.

Rell is hitting live servers in Patch 10.25 and will be dominating the bottom lane throughout the rest of the year. We hope this guide has given you some basic tips to give you a head start for when she is released.

If you have any questions or want to learn more, head to PicklePants’s stream.