How to Get Diamond Before Season 10 Ends (5 Tips)

With the season ending very soon, it’s important that you try your hardest to get as much LP as fast as possible. For you to achieve your end of season goals, you need to play smart, not hard, and in this guide, we will help you optimize your climb to ensure you hit that rank milestone.

Whether your goal is to hit Silver, Gold, Platinum, or Diamond, the information in this guide will apply to every player, rank, and role, so make sure you use everything we suggest to your advantage to get one over the enemy.

When does Season 10 end?

Season 10 ends on the 10th of November 2020. The rank you end on at the end that day will count as your end of season rank. During the offseason, you can continue to play ranked if you wish, but your previous rewards will not change.

For example, if you ended the season in Silver, you will not get Gold rewards if you’re able to get gold in the offseason.

You can, however, increase/decrease your MMR during the offseason by continuing to play ranked if you wish.

If you want to learn how to get rewards or if you need to know any more about when the season ends, check out this article by Riot Support.

The latest champions, Seraphine and Samira are really strong and can be difficult to play against. Even though they’ve both been out for a period of time, players still struggle to play against them.

In October 2020, Samira was sitting as the most banned champion on our tier list.

My recommendation would be for your team to ban both so the enemy cannot pick them. In particular, Samira can be really challenging to play against, and if she gets a small lead as she can run down her opponents over and over again.

Unless you need to ban something else like Pyke or Evelynn, I would recommend that you always ban one of these two champions to increase your chances of winning the game.

If you ban one of these champions and the other one makes it through and gets picked by the enemy, you need to learn how to play against them. Luckily, we have individual guides on how to counter Seraphine and how to counter Samira. Give them a read so you know how to handle them just in case you find one or both of them in your game.

When there are over 150+ champions in the game with tons of different play styles and gameplay, it’s easy for us to want to play lots of different champions. When it comes to winning more games, however, you need to restrict your choice of champions.

Pick your most comfortable champions and then stick to just playing them in ranked. Create a form of tier list of your best champions- your main being S tier, and then several champions being in A and B tier. Limit how many champions you add to this list. 3 to 5 champions is more than enough, but be prepared to go to 10 if you struggle to play the same champions over and over again or get bored easily.

The champions you play should generally be easier rather than mechanically difficult like Camille or Irelia. The reason for this is that those champions require more skill compared to a lot of other champions, and if you go wrong once on them, it can be difficult for you to get back into the game.

Additionally, you’ll be playing better and more consistently when your champion pool is small, which allows you to win more games overall as you will have more experience on the champions you play. Let’s say you spend 100 games on 3 champions- you’re going to be better than someone who has 100 games on 50 different champions, which will naturally give you an edge.

If you’re struggling to create a champion pool or stick to a select few champions, check out our S tier recommendations on Mobalytics Tier List and pick a few of them to play.

Remember that this tip also applies for the role you play too. Stick to one main role and have a back up as your second choice just in case you don’t get your main role. Make sure you have a solid pool in each. Don’t play if you’re autofilled- just dodge and take the minus 3 LP (trust me, it’ll be better in the long run).

3. Optimize your runes and builds

One thing we often talk about here at Mobalytics is optimal runes and builds. Fortunately, builds do not change drastically every patch, but there are occasions where a new build becomes favoured or a set of runes is no longer the best option. 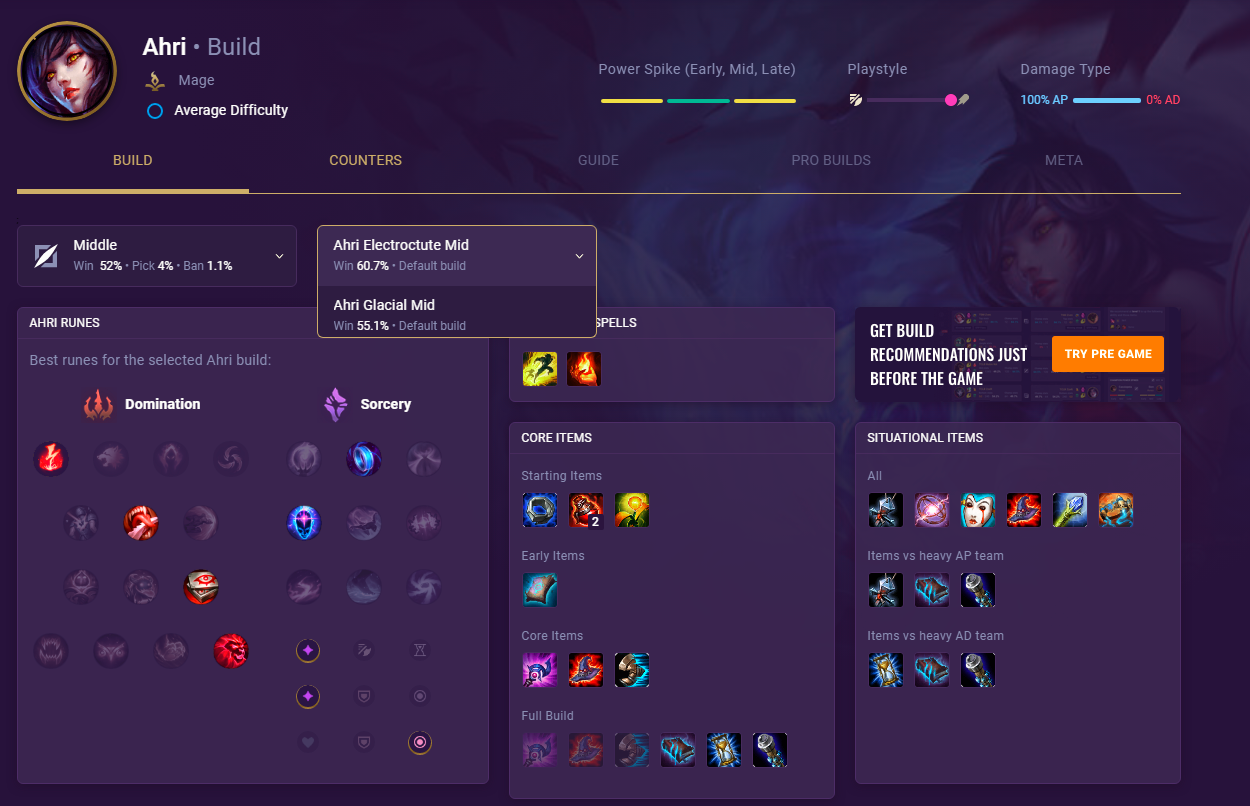 We have 2 builds for Ahri on our champion pages.

It is incredibly important that you keep your runes updated and you are playing with the latest build and rune setup in every game. If you’re a few patches behind, you might not be playing optimally compared to somebody who is up to date. Furthermore, there have been some slight rune changes in previous patches, so it’s a good idea to just double check your runes and update them if necessary.

You can find optimal and updated builds with ease by checking out our Mobalytics champion pages and seeing what we recommend you pick, and yes, they’re updated every week! You can also use our pre-game app and get the builds and runes we recommend straight into your client too so they’re always updated and ready for every game regardless of the champion you’re playing.

Building situational items is also incredibly important and knowing what items you should build in different scenarios is key to improving your build path and subsequently your ability to win the game. As champions with heals and shields are prevalent, items that reduce healing like Executioner’s Calling, Morellonomicon, Bramble Vest and some other items will all reduce the enemies ability to heal.

Whilst picking up situational items depends on the champion you’re playing, who you’re against and the scenario you’re in, a good basis to go by is if you’re against Senna, Soraka or Nami in the bottom lane as an ADC, you should go for an Executioner’s Calling to increase your chances of killing the enemy in lane.

If you want to learn what situational items there are and when to buy them, check out our item guides.

For Top laners and Junglers: Bruisers and Fighters itemization

For tanks in the Top lane and JungleTank itemization

For everyone: Situational item guide

I know how much you want to get to the next rank before the season ends and there’s only a limited period of time in which you can do it in. Usually, doing something as quickly and as often as you can make the overall job get done quicker like reading a book or doing homework.

Unfortunately, this isn’t the same for League of Legends. You should only be playing when you’re ready and you shouldn’t be grinding 10 plus games a day trying to get into Gold.

There are lots of side effects to playing 10 plus games a day which include:

You might be reading some of those and think “well that ain’t gonna happen to me”. Sorry to break it to you, but all of those things will happen if you decide to grind League of Legends non-stop to try and get a better rank.

Instead of playing tons of games, limit how many games you play a day to 3-5 and take a break after every loss. The less games you play, the more of a chance you’ll win as you’ll be less likely to autopilot and you shouldn’t be tired either.

Similarly, be prepared to play fewer games if things aren’t going your way either so you don’t lose more LP. For example, if you perform badly 2 games in a row, call it a day.

At the end of the day, if you grind 70 games a week, you’re not going to play as good as someone who is playing 30-35 games a week. Even then, it’s possible that those amount of games can be too much for some people, so you may want to go for fewer games and only play 5 days out of the 7: avoiding weekends as that’s when players are off work and school.

5. One last word of advice…

I’ve played this game for a very long time and I can always tell you that the grind is never worth it once you’ve hit your peak. While it does offer a lot of satisfaction to be a certain rank, it’s not worth putting in tons of effort in a short amount of time to attempt to get to the next level. It’s also way easier said than done.

Be prepared to call it quits if things aren’t going your way. No one will judge or care if you don’t hit your goal at the end of the season. There’s always time in the pre-season to learn and improve ready for the start of the next season 11.

We hope that you’re able to reach your end of season goals and smash them like the like button on your favorite youtube channel. Remember, if you want to get a Victorious skin, you’ll need to get at least Gold in any of the ranked queues and be honor level 2 in order to get your rewards. The rewards will start to be given out on November 11th and will be fully sent by December 10th.