How to Play Against Caitlyn Morgana

A Caitlyn Morgana lane can be one of the most oppressive lanes to play against thanks to their constant poke, long-chained CC and difficulty to kill. In this Mobalytics guide, we will give you some tips to help you lane against Caitlyn and Morgana in the bottom lane to increase your chances of winning.

Before we begin though, we need to ask ourselves… what makes Caitlyn Morgana so strong?

There are several reasons as to why this bot lane duo is so strong. First, off they each have CC tools. Morgana has her Q and Ultimate while Caitlyn has her W. If Morgana lands her Q, Caitlyn can follow it up with her W to extend the CC duration which can either result in a kill or at least a lot of missing health for the enemy.

Secondly, they both have good pushing potential thanks to Caitlyn’s Q and Morgana’s W. This allows them to push the enemy constantly into the enemies tower. If they’re constantly pushing in the early game, the duo can get multiple tower plates and create a considerable gold lead over the enemy if they’re able to gain a plate lead, CS advantage and a kill lead. There are of course lots of other things that make this lane strong such as them having tons of kill pressure and being able to kill you instantly if they land any form of CC. This is why it’s important that you learn how to play against this lane to reduce your chances of letting them get a huge lead and snowball.

If you want to know see which champions counter Caitlyn + Morgana or want to learn how to play them yourself, check out Caitlyns Champion Page or Morgana’s Champion Page.

1. Match their pushing power early on

Caitlyn is a really strong champion in the early game and will use her pushing advantage to push you into your tower and try to bully you while you’re under it. Her Q is an ability that deals AOE damage which helps her when it comes to pushing.

Similarly, Morgana also has an AOE ability with her W. This makes it easier for the Caitlyn to push you into your tower when the two work together to push the wave quickly.

Take note that Morgana will use her W on the back minions and Caitlyn will try to use her Q to go through as many minions as possible. This is one of the most effective ways that they will push you into the tower. Oh, and of course, they’ll be auto-attacking the minion wave!

Delaying her push as much as possible is very important. Caitlyn and Morgana are an oppressive duo in the bottom lane and if they can get you under your tower, it may be difficult for you to get it out from there.

This is why matching the damage they deal to the minion wave or at least slowing the push down will be beneficial. 2. Avoid walking around the tower

It’s inevitable that Caitlyn and Morgana will push you into your tower at one point or another. In bad matchups, you might even be pushed into your tower for the whole of the laning phase.

While this isn’t ideal, it’s a reality in some matchups like Twitch with Zilean.

Caitlyn will try to place Traps under your tower in attempts for you to walk into then. Keep an ear out for the audio cues for when she has placed them, and look for the indication that they’re there.

Generally, Caitlyn will place them behind the tower which makes it difficult for you to see them, and if you’re not paying attention, you’ll probably walk into it by mistake.

There are a few things you can do to reduce your chances of walking into these. First off, avoid walking around the turret full stop. Do not put yourself close to it just in case there’s a trap there.

Instead, stand towards the opposite side of the lane. Additionally, do not put yourself in the tight spot between the turret and the wall. This will make it easier for Morgana to land her Q on you. Stand towards the opposite side of the lane if you’re under your Tower so you do not walk into the Traps.

Secondly, listen out for the audio cues as you can hear when she places her Traps. Finally, look out for the tiny animations to her Traps. They should show a small outline which you can see behind the towers.

As a bonus tip, if you play unlocked camera, you can see her Traps much easier, so try to learn how to play fully unlocked if possible.

3. Make sure you’re behind a minion at all times

Morgana can be really difficult to play against thanks to her Q. If you’re hit with it, you can be locked down for a long period of time which will usually result in you losing most of your health bar and getting an AFK warning!

You should go into this matchup with the mindset that you need to be standing behind at least 1 minion at all times and try to play towards the opposite side of the lane as her.

Standing behind at least 1 minion will make it really difficult for her to land her Binding because it is unable to go through minions. Standing towards the opposite side of the lane is also a good idea because it will increase the distance needed for the Binding to land.

This makes it easier for you to dodge the ability and react in time. Standing close to her will give you less time to react to it.

As a bonus tip, if you’ve been able to keep the wave away from your tower, try and avoid putting yourself in chokepoints and close to walls. Standing closer to the wall will make it easier for her to land her Q as you have less options to dodge it.

If you’re in the open, you can dodge it in multiple ways whereas when you’re close to a wall, you’re somewhat limited to what path you can take to escape the CC. 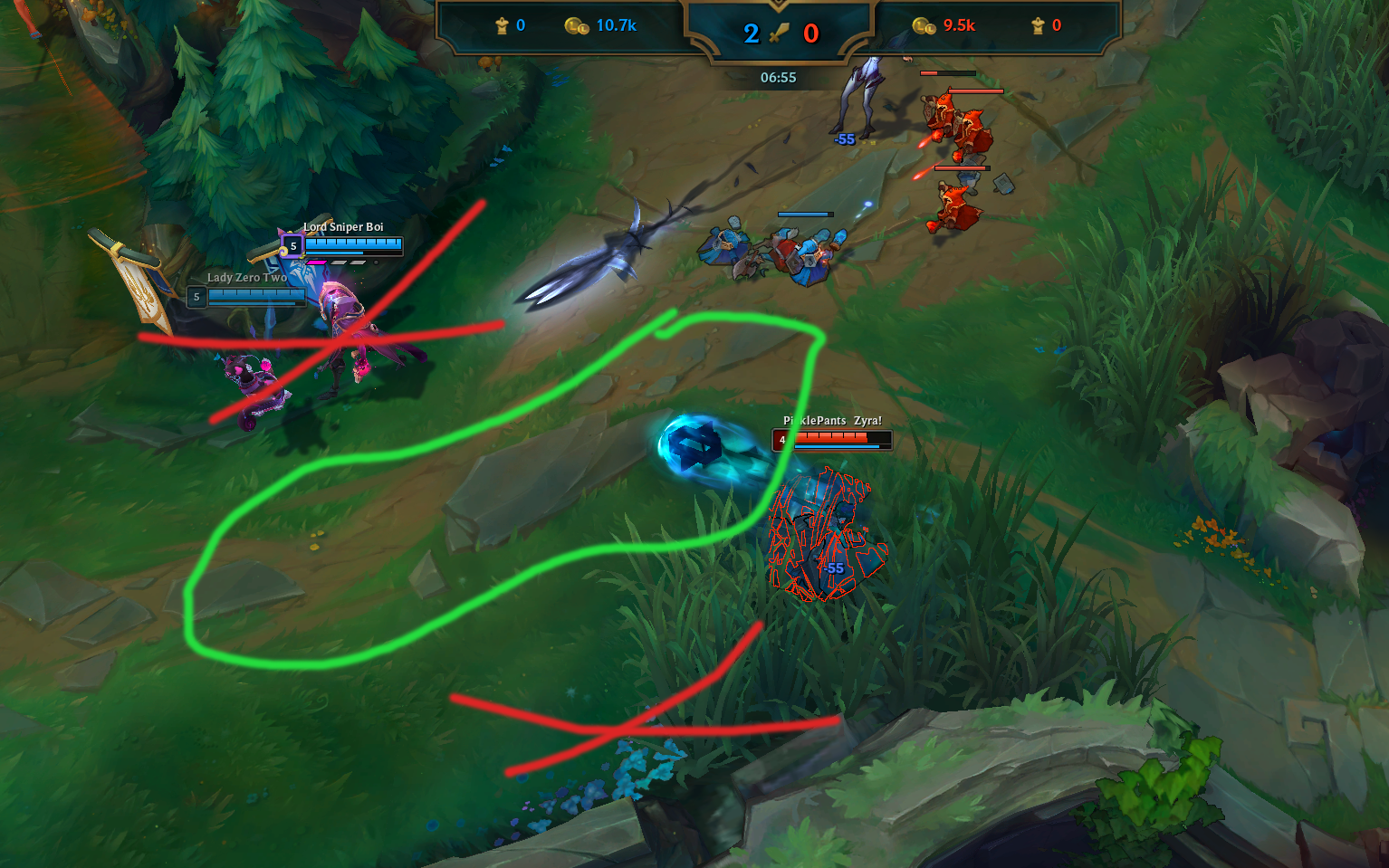 Avoid standing in the X zones when playing against Morgana and any champion with skill shots. Stand in the green zones instead.

4. Be prepared to lose lane gracefully

There are some matchups that do not win lane. They’re meant to lose gracefully or just scale.

When you’re playing as one of these matchups like Veigar Nami, Twitch Janna etc, you need to try to scale and avoid fighting. Fighting into a Caitlyn Morgana lane is only going to result in you falling behind.

This is why it’s important to take note while the game is loading to understand what your goals are in the matchup. If your goals are to scale and avoid fighting, then you need to do so otherwise you will fall behind. Giving any form of lead to Caitlyn Morgana will result in making the game very hard.

If you’re not in a position to fight, you need to chill out, avoid fighting, and avoid falling behind. You should focus on farming what you can and losing lane gracefully. To lose gracefully, just don’t fight.

You’re going to lose your tower early, but you should try to go as even as possible so you’re not too far behind after the laning phase has ended. Here’s a separate guide on how to play from behind in the bottom lane. If you try your hardest to lose gracefully and use everything we talked about in this guide, you’re going to have good odds to get back into the game.

Some players are prone to dying, so knowing how to reduce your deaths is key in every matchup but more-so in this one. Here’s a guide on how to increase your chances of surviving laning phase.

5. Know when to change your champion pick

If you see that the enemy has picked Caitlyn and Morgana, you need to pick some champions who can do well into them and avoid champions who need time to come online. Avoid playing super squishy champions like Twitch or Veigar. Stick to champions who have better early games like Lucian, Jhin, or Syndra.

Similarly, avoid picking Supports that are Hookers or engage champions like Blitzcrank, Nautilus, or Alistar as Morgana counters them. Also, melee champions will get bullied down by Morgana and Caitlyn’s poke.

It’s better to pick Supports that have poke or wave clear so you can reduce the chances of them pushing you into the tower. For example, Karma and Zyra are viable options into this matchup.

For Supports specifically, if you’ve already shown your champion pick and you’re countered, be prepared to adjust your Supporting item to increase your chances of winning the lane. Here’s a guide on how to complete your warding quest faster.

Abusing cooldowns is super important in all matchups, but more so in tough matchups. Playing around Morgana’s Q and E will make trading so much easier. When her Q is down, she will not be able to CC you.

For a referesher, check out Caitlyn’s cooldowns and Morgana’s cooldowns.

Looking for and playing around these brief cooldowns will help you do better in lane and get kills. I would recommend that under most circumstances, you should avoid looking to play aggressive or go for trades when they have their abilities up that can interrupt the trade (although this isn’t gospel).

A Caitlyn and Morgana lane can be really difficult to deal with. If you’re not able to trade with them, don’t bother. Be prepared to lose gracefully and avoid putting yourself in sticky situations where the enemy will be able to kill you.