5 Tips to Prevent Invades in League of Legends

How to Stop Dying to Invades in League of Legends

Invading in League of Legends is a strategy players use to get leads over the enemy. An invade may consist of one player or multiple team members invading the enemy’s jungle in attempts to steal camps, get kills or set up ambushes.

There are various ways a team may invade, and in this Mobalytics guide, we will discuss a few of them and what you can do to prevent the enemy from gaining a lead.

If you’re looking to up your game, or want to improve at League of Legends, sign up to Mobalytics for more tips to improve your climb!

5 Tips to Prevent Invades in League of Legends

Look at the enemy team composition

In champion select, look at what champions you’re facing. Some champions with strong level 1’s or teams with lots of CC are good at invading. For instance, Thresh, Alistar, Morgana, Rell and Lux can all invade with their team.

Usually, you’ll find strong early game champions are the ones who invade you early. If the enemy team lacks hard CC, then they may not invade- but it’s never guaranteed!

You can reduce your chances of dying from invades, or at least spot the enemy before they invade by standing somewhere that is not under your tower at level 1. In this image, there are multiple locations you can stand at level 1. 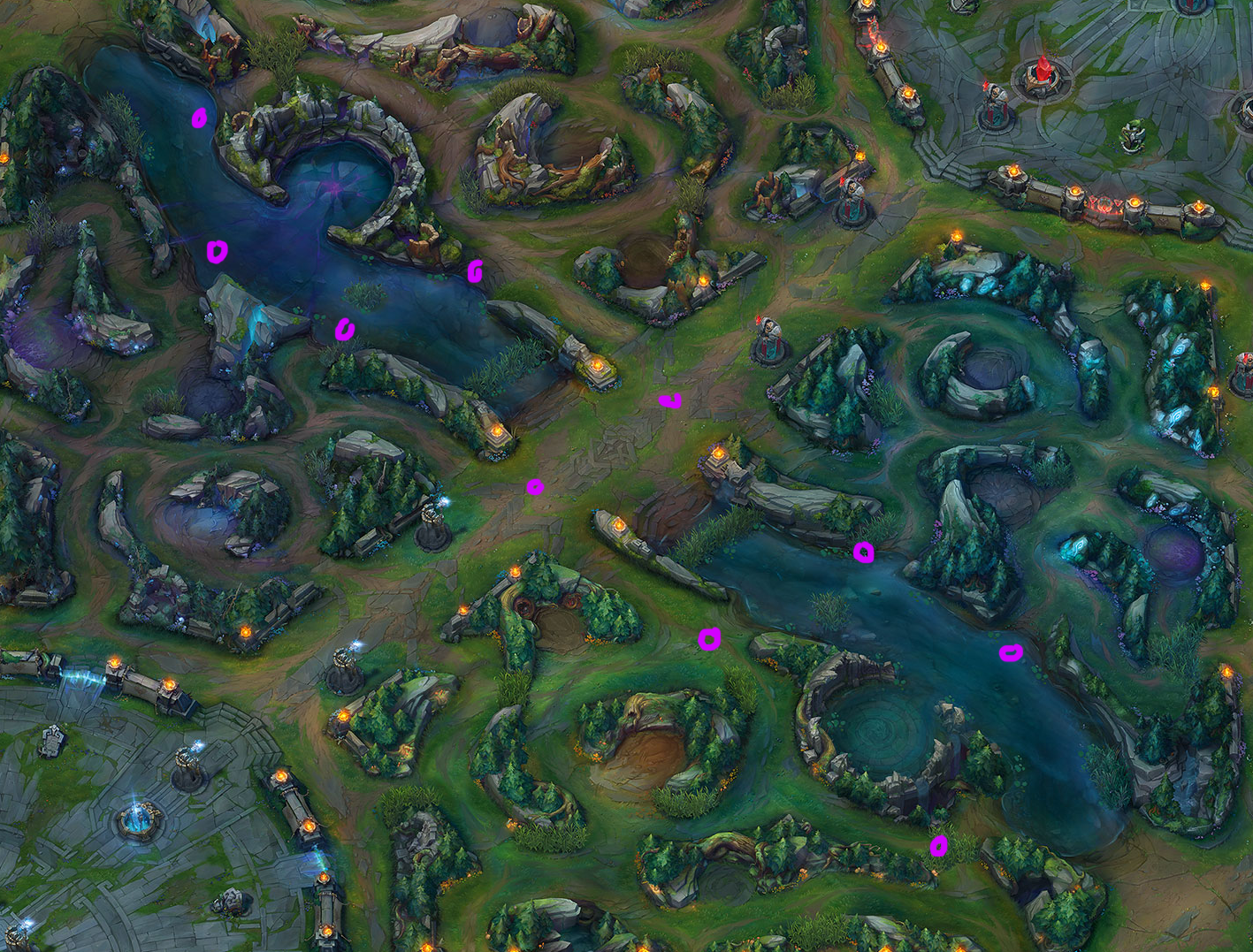 For the blue team, after leashing for your Jungler, most players will run through the tri-brush near on their way to get into the bottom lane. This is fine in most cases, but if the enemy has a powerful level 1- you need to find an alternative route to the lane.

If you face check this bush and the enemy is waiting there, you will probably die or lose a lot of health and have to blow summoner spells.

Champions to be on the lookout for are

Instead of walking the usual way, walk down towards the lane directly under the red buff, and take the long route- through the bush to lane. This way, you shouldn’t take any damage or die from their invade. 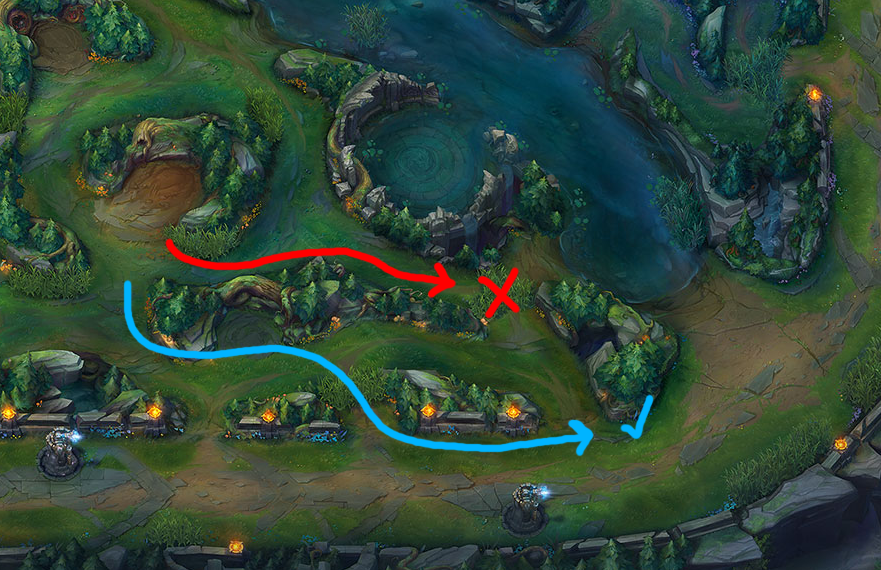 If you know that the enemy will be in this bush at level 1, you could ward it early and then help your Jungler at their buff. Alternatively, you can just avoid this bush altogether.

Tracking the enemy Jungler is an essential strategy that will help you win game. By knowing where they are at any given time, you will severely reduce the chances of them getting kills and snowballing.

There are many ways to track the enemy Jungler, one being warding that we will discuss in the next section, and another by knowing every Junglers jungle route.

You can find all the best jungle routes in League of Legends by heading over to Mobalytic’s champion pages and searching for your favourite champion.

As we can see by this image, Udyr usually starts his red buff on the blue side. With this in mind, you can coordinate and expect him to be at a specific camp at any given time. 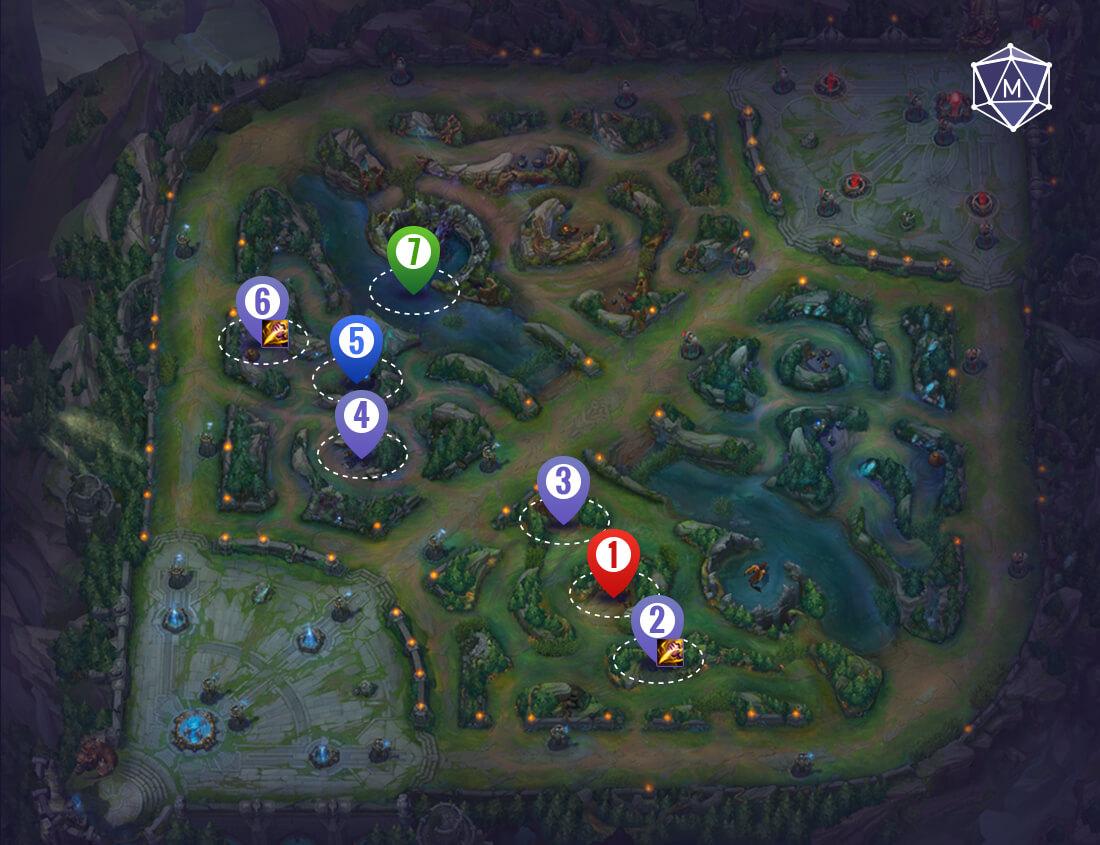 We’ve got tons of other tricks to help you track the enemy Jungler in League of Legends in this guide. Give it a read, and it will help you in a variety of ways to help you step up your game.

Warding can help an awful lot when it comes to invades. At level 1, you can place wards in high traffic areas that the enemy may use to invade you. As seen in this picture, placing wards around the 1 minute mark (or earlier if needed) can help you spot the enemy if they try to invade you early.

Outside of the first buff, you can always ward your jungle entrances if you’re scared of the enemy invading your jungle. You should also place defensive control wards to help keep you alive too.

Don’t forget to secure the Scuttle Crabs because they also provide information and can help you spot the enemy Jungler before they enter your jungle. 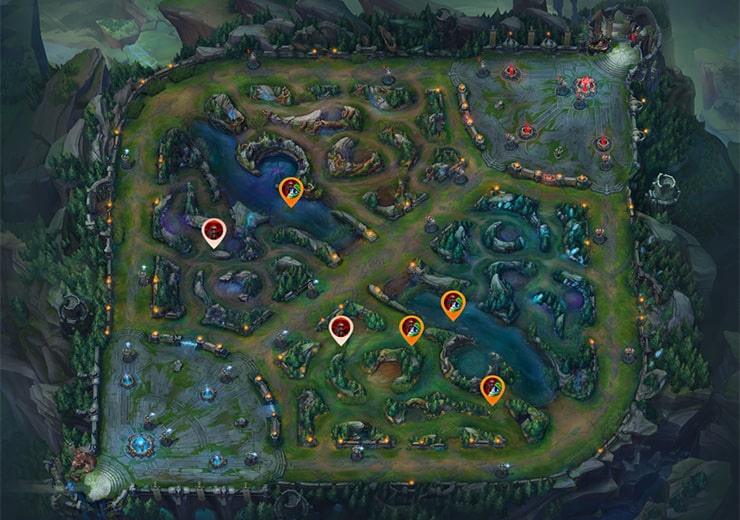 Defensive warding if you’re scared of the enemy invading you early.

If you want to learn more about warding in League of Legends, and how to ward when you’re ahead, behind or even: make sure you check out our in-depth warding guide!

Some champions in League of Legends will invade more than others. If you’re a weak early game champion or somebody who needs time to come online, you should be aware that you may be prone to early invades.

Champions who are strong in the early game will tend to invade you and try to kill you. These champions include, but are not limited to:

If these champions invade you in the early game, just back out and don’t let them kill you. If you die, they could invade you over and over again and take you out of the game.

Use everything we have discussed in this guide so far to make dealing with them a lot easier.

Other tips and tricks

Here are some miscellaneous tips and tricks to help with invades. More so these tips are things to be on the lookout for.

Stop yourself and your allies from dying by using these tips to prevent early invades. Remember, if you don’t die to an invade, or lose camps, then the enemy’s invasion was pretty much wasted.
For more tips and tricks, head to Mobalytics!