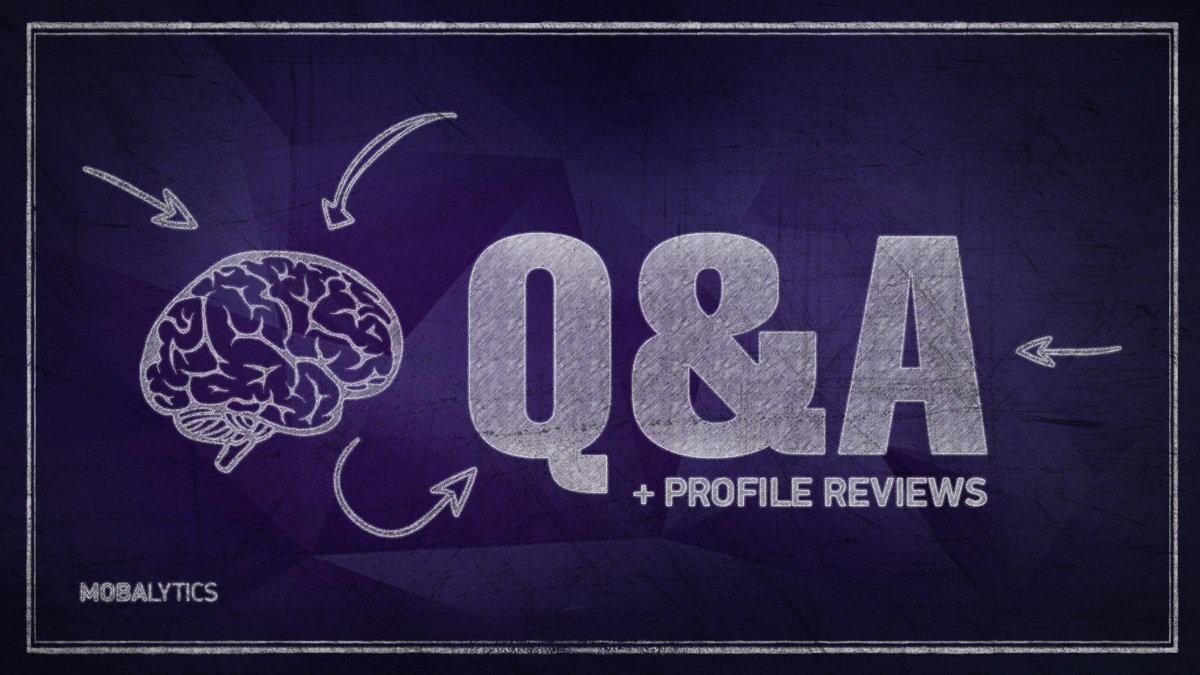 10 Things You can Learn from our Challenger Coach Profile Reviews

To be the best, it helps to learn from the best

On our Twitch stream, we host a FREE profile review and Q&A session at 1 PM PST every Thursday and Friday that lasts just over an hour. Here’s a session from earlier this year to give you an idea of what we do:

As a Mobalytics team member, it’s definitely one of my favorite parts of the week. We’ve grown a ton since then and have become a little community with familiar faces that come pretty regularly and have a good time.

To join in on the fun, all you need is 20 ranked solo queue matches and to post your profile link in our chat when we go live.

We have a first come, first serve line system – if you come late we also have an option to cut the line by donating 100 bits through Twitch. If you’re feelin’ lucky, there’s also a random lottery selection out of the remaining line for the last review.

Post your profile as soon as you see this, it means we’re live!

When Morïarty reviews your profile, here’s the usual flow:

1. Checks out your champion pool and play habits

3. Diagnoses what you can and should be doing better

That’s it! Once you get your review we recommend following through with Mori’s suggestions and then coming back next week or so based on how many games you played since the last review. By the way, if you miss out on the stream or have to step out before we get to your place in line, don’t worry because our VODs save automatically for 2 weeks.

Why you should check it out

Many people are good at looking at what their teammates are doing wrong or failing to do, but it’s hard to diagnose yourself. It’s always good to get another perspective, especially by an expert or mentor.

Doing so can really open up your eyes to some problems you didn’t see or weren’t willing to call yourself out on. This is also a great way to get deeper interpretations of your GPI scores. We try to make them as understandable as possible but if there are things you want to be clarified, this is your best opportunity because Mori helps to make our advice and scores. If you’re stuck and don’t understand why you’re losing, he can identify it immediately.

League is also a game that constantly changes – it can be hard to keep up with all the buffs, nerfs, reworks, and so on. Moriarty can also help you understand what’s good to play during a patch based on our tier list with recommendations for your builds and champion pool.

10 Useful tips from our profile reviews

Now that you understand how our review streams work, here are some of the “best of” tips that come up often:

1. Stick to what works

If you’re doing well on a champ, stick to it! We often get community members who have champions in their pool that they have positive win rates on but they tend to experiment or jump around to other champions without rhyme or reason. It seems obvious, but playing your best champs will help you climb faster – if you get antsy or bored, scratch the itch to play another champ in a different game mode.

2. Move on if something doesn’t work

5-10 games is a good measure for if a champ is a good fit for you. If you’re struggling with a negative win rate on a champion, it’s probably best to invest time into another one. Don’t feel too bad, even pro-players have their own personal strengths and weaknesses that cause them to gravitate toward excelling on certain champ play styles.

3. One death can make a big difference

A lot of players don’t understand the impact that one death can have, perhaps because they’re used to dying so often that it doesn’t seem to make a difference. However, simply staying alive can snowball the game in ways you may not realize until the game plays out. Always remember that you’re missing out on farm, experience, and more opportunities in general while you’re dead.

Our Survivability scores are designed to help you understand the where and why of your deaths. Keep a close eye on them to help isolate places you may be reckless or unaware.

4. Aim to be solid in your off-role

When you get auto-filled or have to play your off-role, stay humble! You don’t need to always carry, aim to be serviceable instead of looking to carry.

We often get players who pick flashy or high-intensity champions in their off-role, even when they aren’t proficient in them. If you’re not a Jungler, don’t play Lee Sin. If you aren’t a Top laner, you probably shouldn’t play Riven.

Check out our tier list for good simple picks or add a champion that can flex across multiple roles!

5. Have a ranked mindset

Before and after a ranked match, you should evaluate yourself mentally to see if your head is in the right place. If something is distracting you IRL, it probably isn’t a good idea to continue queueing up solo queue because it can negatively affect your play.

If you aren’t feeling serious about competing and trying your best, perhaps you’re in a mood for just messing around, do so in normals or flex queue. Keep a mental separation of when you want to play at your best and when you want to relax.

At lower elos, players often don’t recognize when they can take a tower after winning a fight. If the advantage is there in terms of being stronger or having more numbers, look to take the turret to open up map and create more opportunities. For example, if you’re a Jungler who succeeds in ganking for your bot lane, prioritize the tower over the Dragon, taking enemy camps, or anything else. If you’re a bot lane duo, take the turret and then look to lane swap top to apply pressure on another turret.

Be sure to play to the strengths of your champion or your team comp. A common issue we see in profiles is that players may not understand how to play to the best potential of what they’re working with.

For example, if you’re playing strong early game gankers, you should probably have good scores in your Initiative and Ganking – early game Farming isn’t as important.

If you’re playing a split pusher, you should have good Duels and Farming – it’s okay if you don’t have a high participation in Teamfights.

If you don’t know how to evaluate your performance based on your champ and team comp, definitely come to a session!

If you have a low Aggression score, it may mean that you consistently have a bad early game due to getting bullied and not putting any pressure. Alternatively, you may be playing so safe that you aren’t actively looking to press any potential advantages or create opportunities.

The player who looks to make a mark early on will ultimately be able to make a bigger impact on the game by helping their allies, so don’t concede the early game so easily.

9. Lead the way with pings

You can take more control of the game by learning how to effectively use pings. Doing so can help coordinate your team around objectives, save their lives, and point out key enemy targets. The first person to ping will be the one that others will likely follow.

10. Watch replays with a purpose

One thing to note about watching replays is to be efficient with your time. Don’t just randomly watch through your games, do so with a clear intention in mind.

Are you checking out a particular duel that you barely lost? Reviewing your team fight deaths? Go straight to the timestamp you need, make note of what went right, what went wrong, and move on.

Don’t be a stranger!

We really do hope to see you in our next stream! Remember that it’s free and we’ve had plenty of people who have climbed more efficiently since they started attending. Here’s a little Twitch chat testimonial from one of our regulars 🙂

As a reminder, our streams are at 1pm PST, Thursdays and Fridays! If you have any questions about or stream or Twitch,  join us in our Discord!