4 Coordinated Pro VALORANT Rounds You Should Learn From

4 Coordinated Pro VALORANT Rounds You Should Learn From

A lot of impressive, well planned and meticulous plays have been made by pro teams around the world recently. Here we will try to showcase a bunch of memorable rounds from various regions.

Pro teams have obviously spent time organising and practising how they will execute some rounds whilst on attack and defence and it is very interesting to see it come together successfully.

This blog post will aim to do two things, demonstrate how and why the attackers were able to force their way onto sites and secure the round. Secondly, what exactly it was that gave defenders the edge over the opponents trying to take sites.

The article deliberately leaves out the rounds that were heavily focused on aim-duels, the crazy flicks and the nutty one-taps.

Instead, it aims to focus solely on ability collaboration between teammates so that maybe us ordinary gamers can steal a few ideas and tactics!

1. The Next Level (TNL) execute onto A Ascent against DAMWON (KOREA)

TNL started off the first map of their quarterfinals on Ascent with a round straight from the training grounds.

What was most fascinating about their execution on A was how well-timed TNL exy (Phoenix) managed to molly off the entrance of A short (tree room).

Exy has a  Hot Hands lineup from A main meaning he can utilise this molly with maximum safety whilst also utilising the element of surprise against DAMWON (since it fell in a smoke).

I tried to investigate what the lineup would be like… Here is one I managed to find. This can be swiftly lined up by positioning Phoenix’s left pointing finger with the middle wooden block on the wall as shown below. 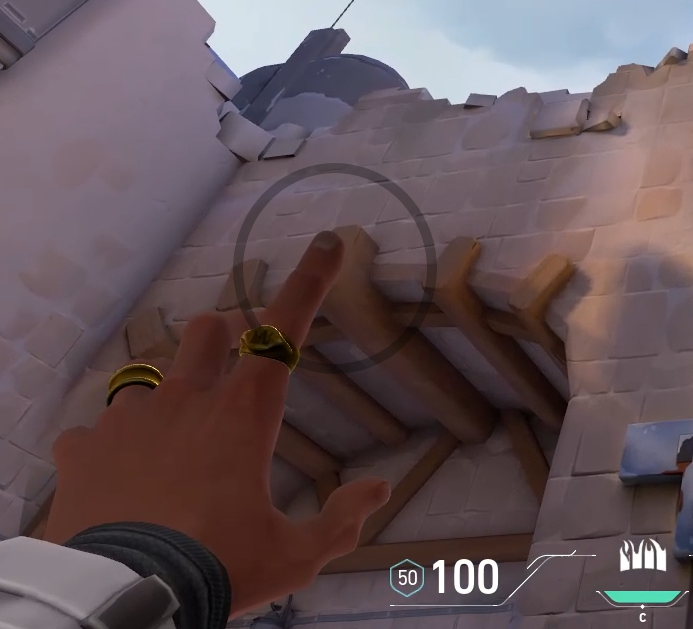 To contextualize how TNL set up for this execution, Astra is top mid meditating setting up a star on the A short door ready for smoking. The rest of the team push up A main, protecting Sova to gain information with his drone.

The drone is a great way to gather information and push opponents back and secure space.

DAMWON’s Phoenix, ‘iNTRO’ has his location revealed by the drone and is forced out into tree room to seek cover.

As this happens Astra smokes short so that Exy’s molly is hidden. As iNTRO enters tree room he loses the entirety of his health to exy’s HotHands; opening up the site for TNL. 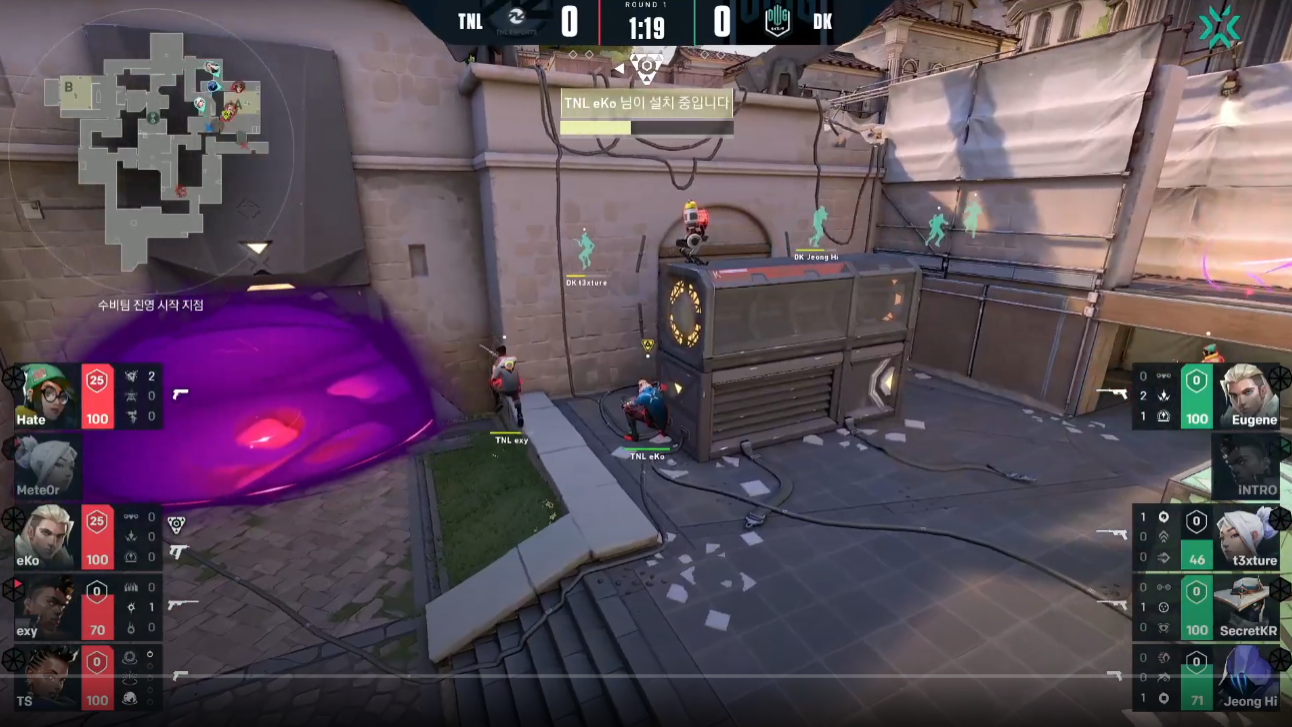 [0:027] TNL’s Killjoy doesn’t waste a single second and immediately sets up her utility across the site for postplant. Her turret watches heaven for the team so they don’t have to peek and can gain some delay.

Further, she goes under heaven to place Nanoswarm in a way that can’t be destroyed by the traffic coming from above.

Activating this swarm forces the opponents to wait beside it or push tree. Knowing this, TNL Sova aims his shock darts to damage enemies who decided to wait. 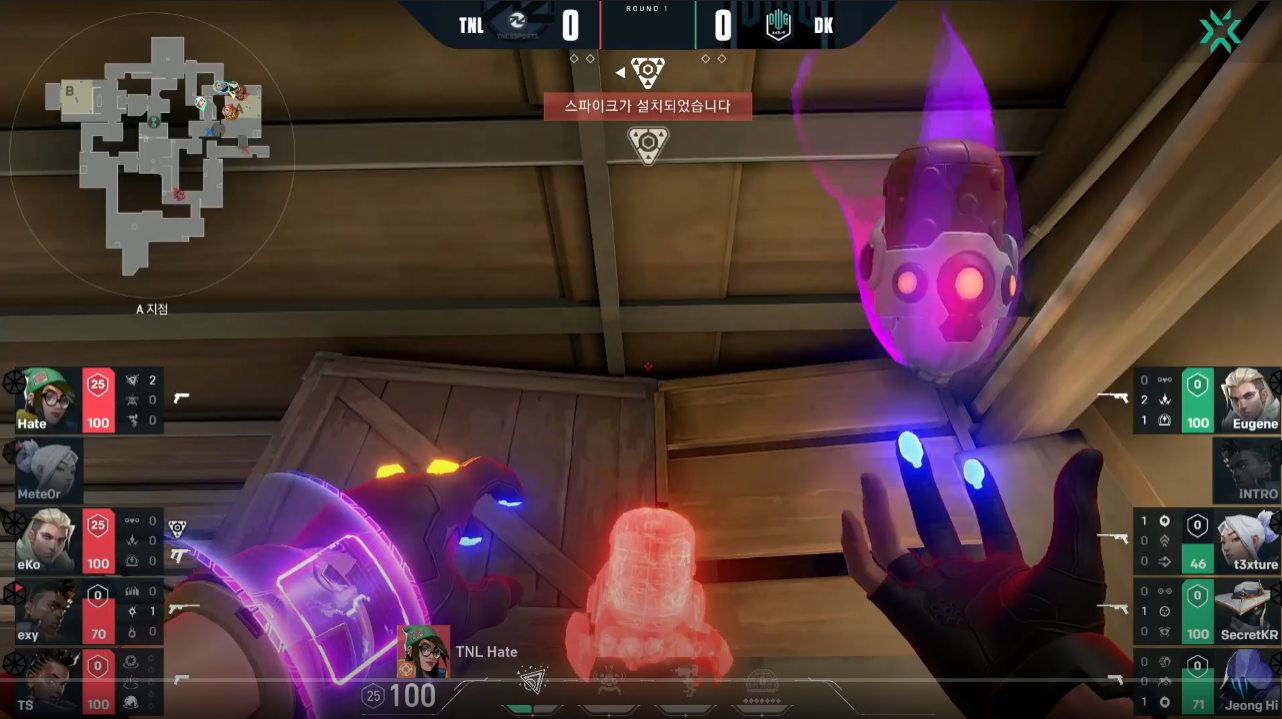 Astra places a star down on heaven to smoke it only after the bomb has been planted and the site is secured. (Placing stars down early in the round or in the buy phase can give away which site you are executing).

Only now, Astra has finished meditating at top-mid. She begins a late rotate up cat-walk into the tree room to provide control there.

Her positionality here ultimately gets a pick on Jett and secures the round. 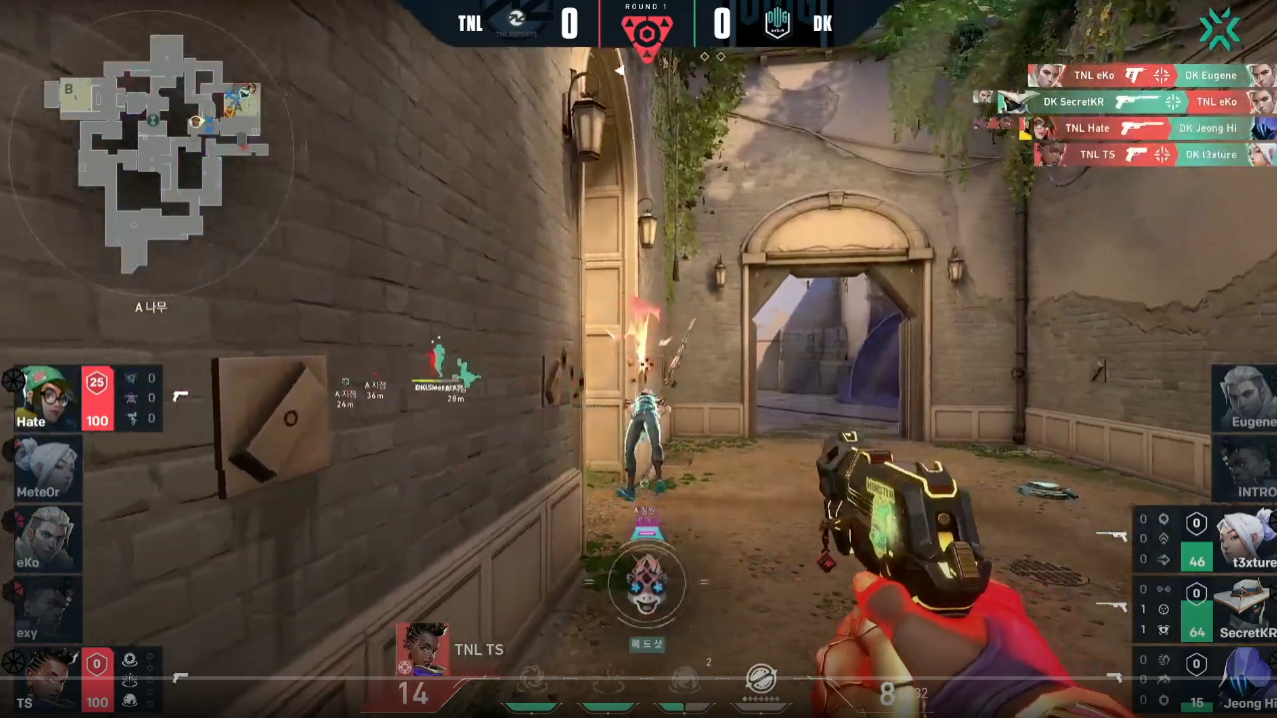 2. SENTINELS hold on A site Ascent against XSET (North America)

SicK and TenZ linked up on A site defence and ended up emphasising just how strong coordinated ultimate abilities can be.

SicK (Phoenix) and TenZ (Jett) start the round off by gaining A main control immediately.

SicK uses Hot Hands to zone out enemies from pushing into A main, forcing them to wait in A lobby.

Simultaneously, SEN zombs uses his paranoia towards the entrance of the lobby further securing control of A Main.

SicK then uses ‘Run it Back’ to flash and push into Lobby hoping to grab a kill. The audio queue of the Phoenix ultimate has XSET heavily anticipating his push. 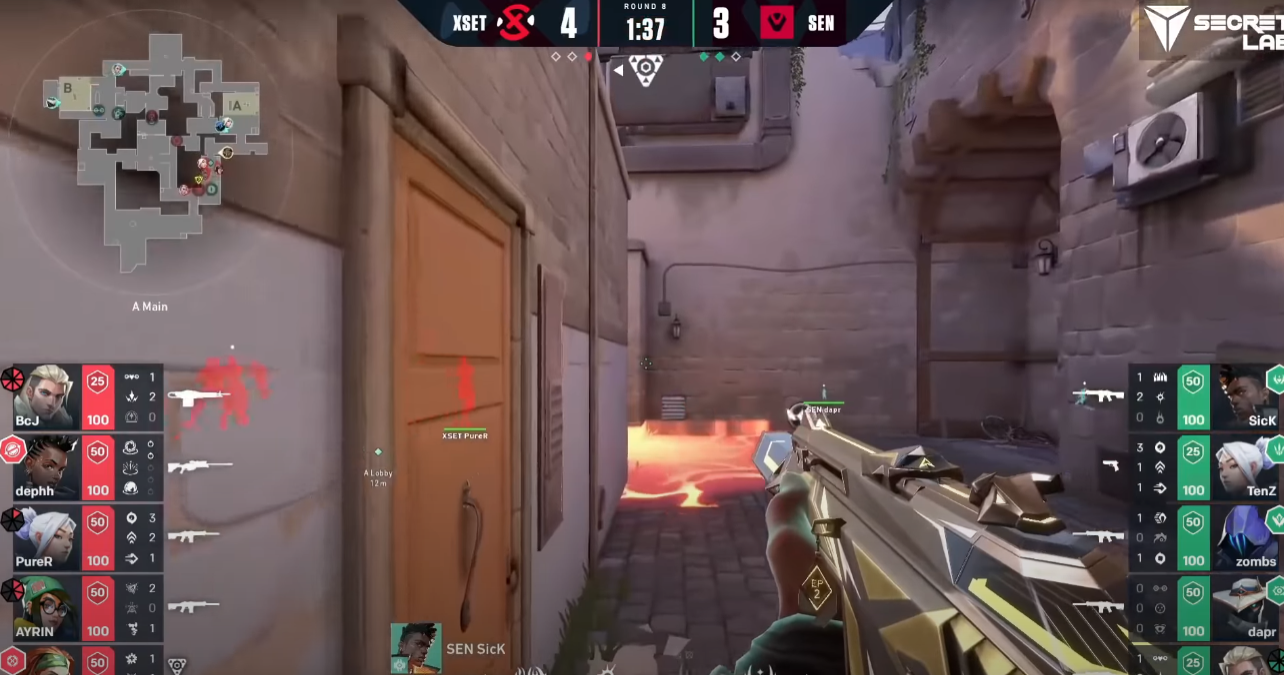 This opens up the opportunity for TenZ to updraft from the top of generator with knives and pick off unsuspecting XSET members in A lobby who have prepared their crosshairs for SicK’s push. 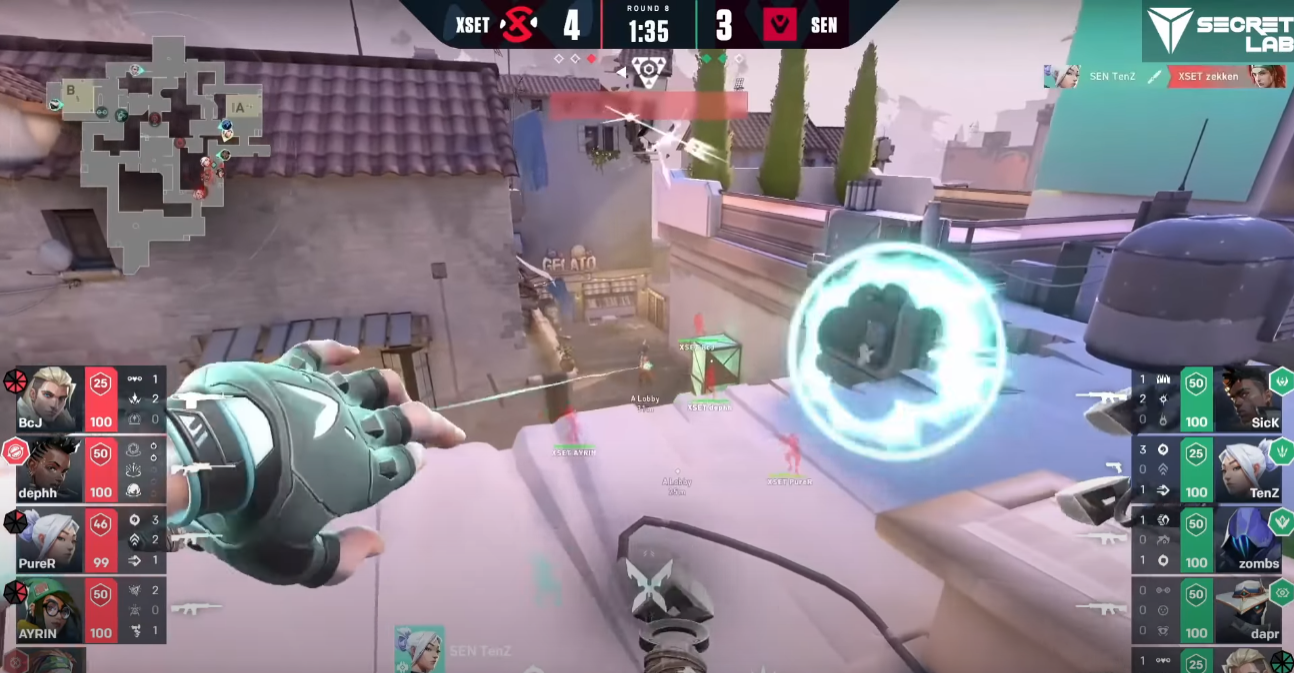 This play by Sentinels is quite well thought out as the focus of the opponents in the lobby becomes split and confused between TenZ and SicK.

TenZ gets the opening kill on Skye, at the same time SicK flashes out to try and grab another pick.

Unfortunately, he fails and is forced to respawn on his ultimate marker.

This entices XSET PureR (Jett) to push and grab the pick on a vulnerable SicK.[2:16:24]

Like a chess game Sentinels have this well thought out and TenZ is able to cover for him and trade out the kill for free. 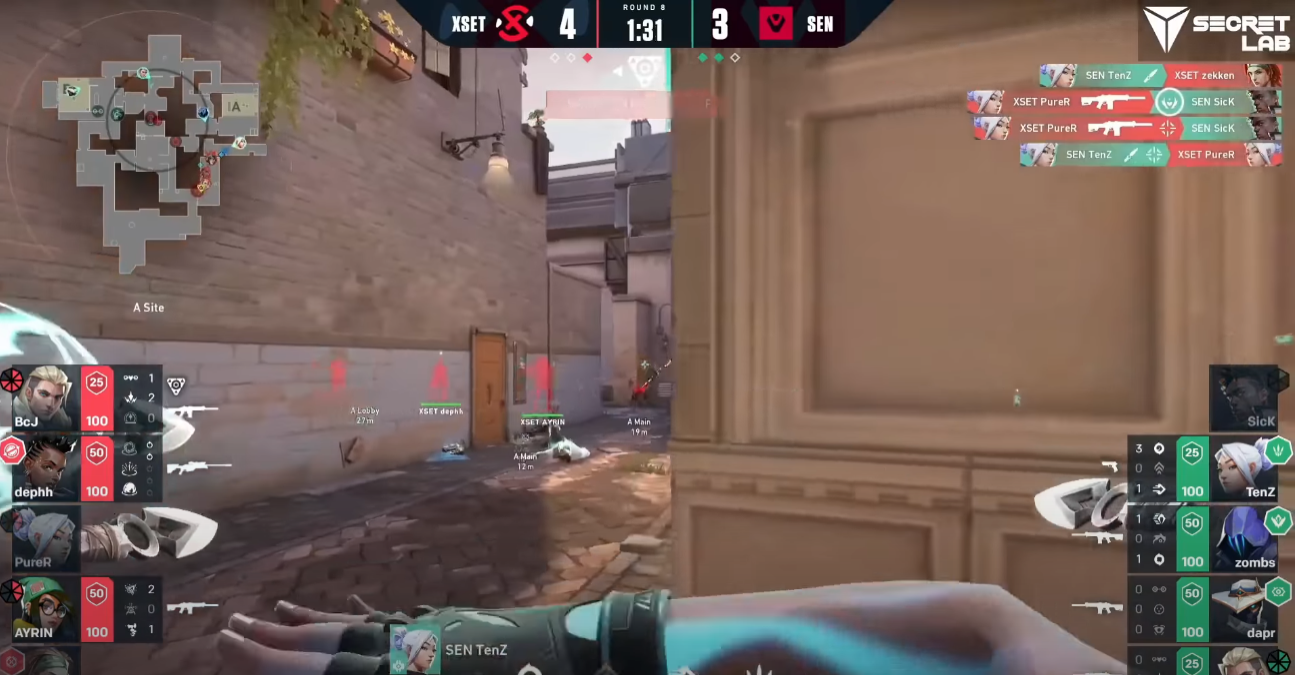 Despite the Phoenix ultimate failing to gain a single kill, Sentinels still end up 4v3 now with information on XSET’s whereabouts and full site control.

A very favourable position to be in, highlighting the strength of this play despite SicK’s mistakes.

[2:17:21] XSET decided to continue pushing A site however the rest of Sentinels are well prepared now to hold down the site.

TenZ displays some of his precision by jumping the double box to grab another pick.

He makes a point of just how important it is to stay mobile, jump around and make it difficult for your opponent to track you when you are using knives on Jett. 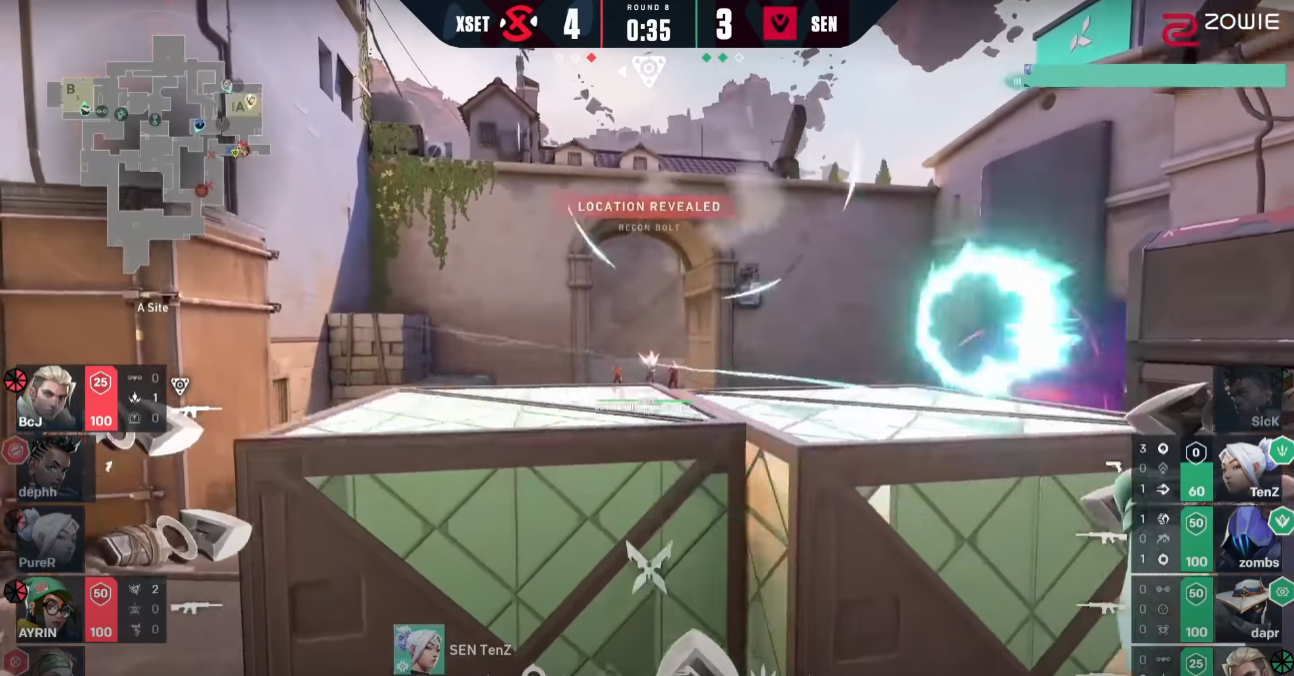 Ultimately, the 4v2 in favour of Sentinels becomes too much as XSET BcJ and AYRIN continue pushing a stacked site eventually leading to an impressive TenZ ace!

WGS execute a fast B attack with the link up play of KAY/O and Breach. Initially, the WGS team are stuck behind NUTURN’s Astra smoke on B main.

This ends up playing in the favour of WGS as it allows them to set up their utility for a quick take. 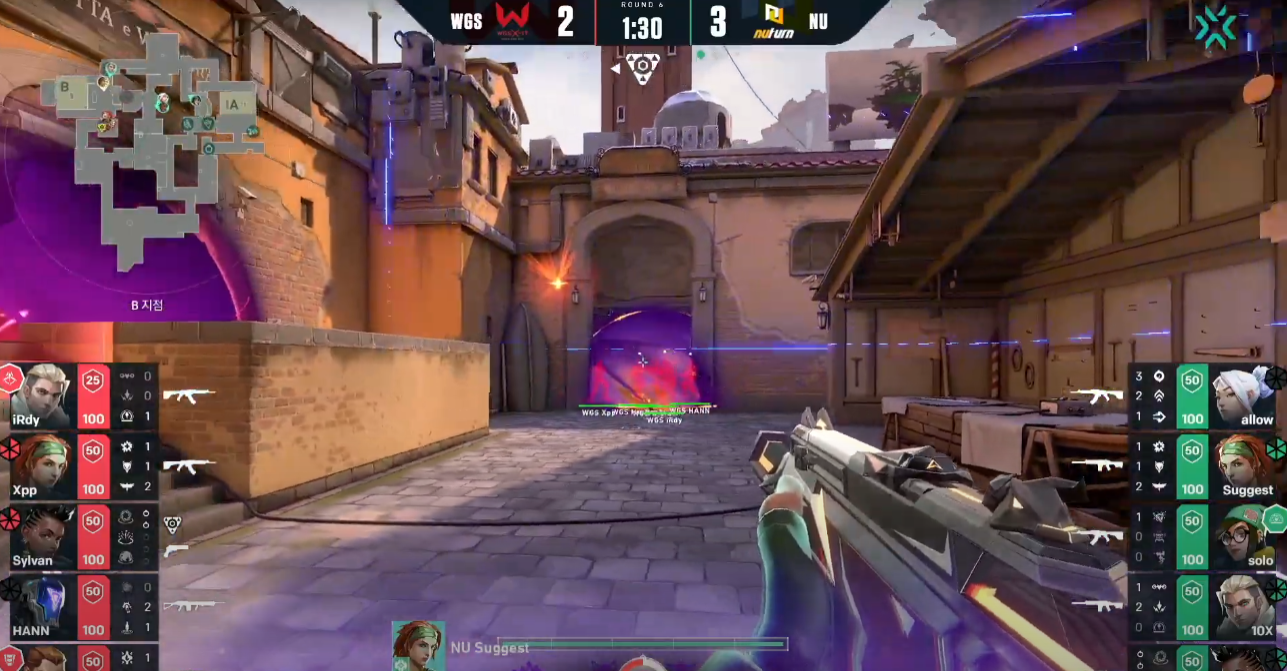 Three particular ability usages are what allow WGS to take B site successfully:

The three pieces of utility are used in harmony with each other to force the opponents on B site into awkward positions and or have them fall off and play retake.

NUTURN Suggest (Skye) begins the round inside the market. Once WGS Sylvan (Astra) smokes off-market he makes the decision to peek just outside the smoke.

[11:15] WGS account for this possibility and KAY/O straight away before they have even pushed outside of B main throws his FRAG/MENT grenade towards the outside of market forcing Suggest down off the stairs into an awkward and vulnerable position.

At the same time WGS Has1ra14 (Breach) flashes out of B main to begin flooding the site with his teammates.

[11:18] NUTURN Suggest is flashed successfully by Breach and resorts to falling behind the box in the middle of B site, he is rattled and uncomfortable holding this line of sight and ends up dying, opening the site for WGS.

[11:25] At this point 2 members of WGS have gotten onto site to play post-plant whilst KAY/O holds B main for greater map control and WGS Skye pushes right up to the CT Astra smoke to look for another pick which he does end up finding.

Playing this position definitely caught NUTURN’s Sova off guard and ended up bringing it down to a 3v3 with site and B main control. 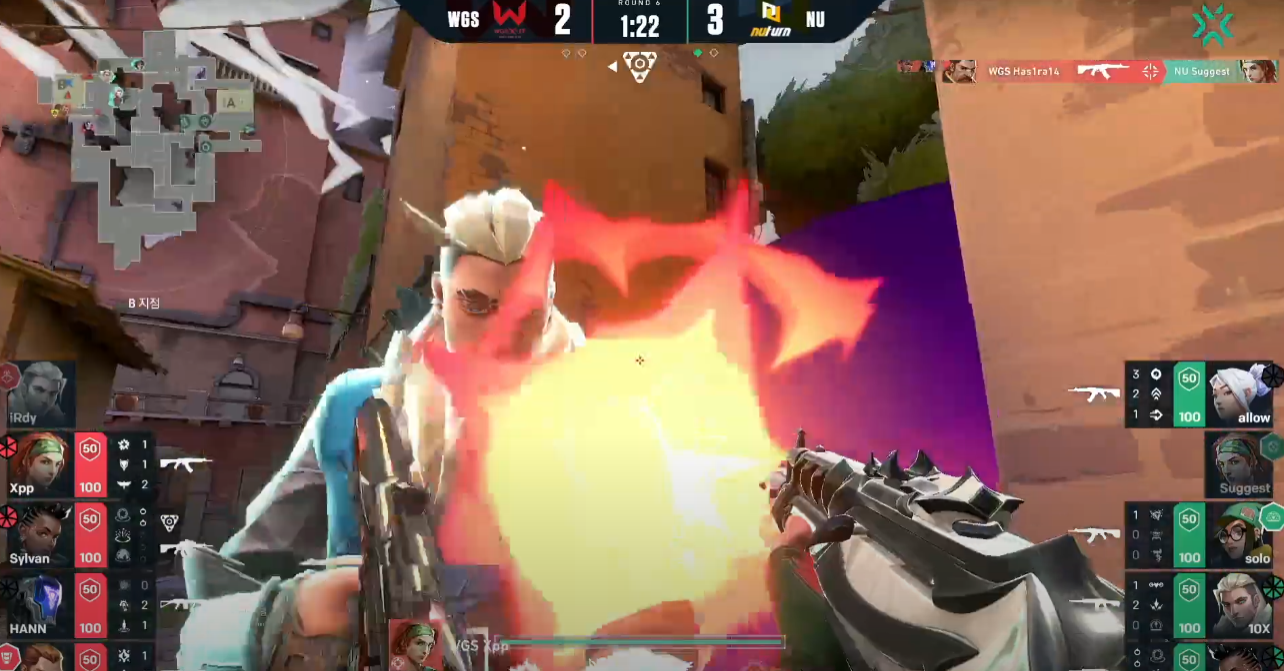 The round begins with the majority of ACEND clustered outside A garden.

The key to this round was the diligence they had in slowly using their utility to gain control over A sewers rather than just smoking cross and W keying from garden. 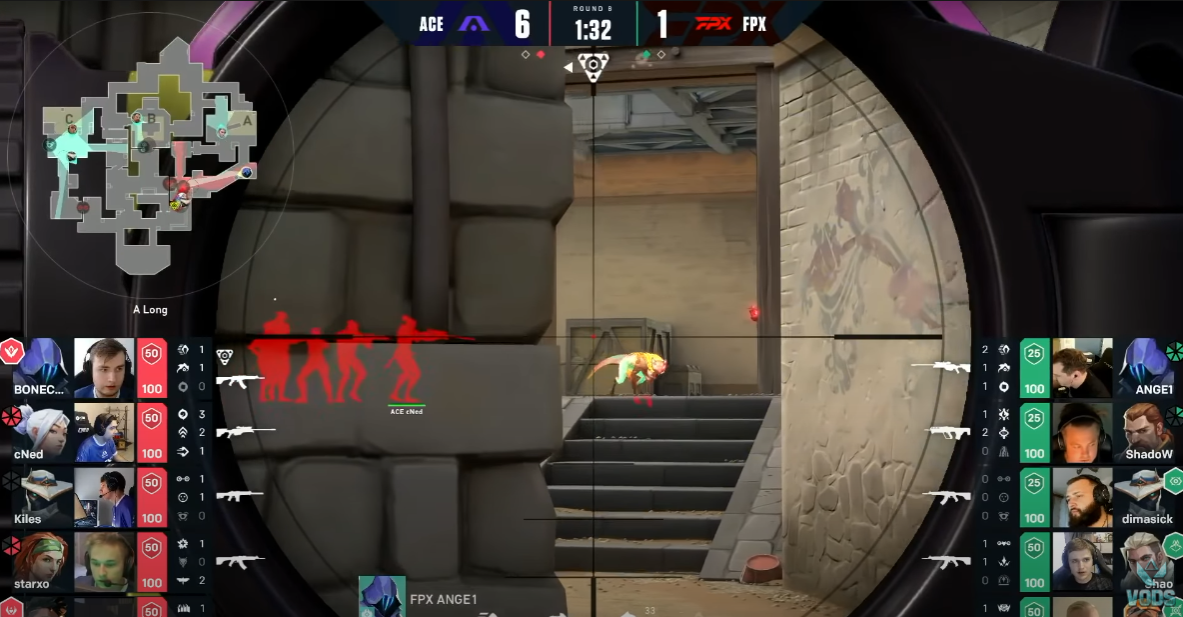 In this image you can see ACEND Kiles and ACEND starxo using the Skye wolf and Cypher camera to gain information both over sewers and long.

[1:28:14]By this stage the cypher cam can confirm that FPX Omen has fallen off and there is probably no one holding A long. However ACEND are very careful to only let cNed first peek long with his Operator whilst the rest of the team take cover behind the wall. If they were to W key they would have run the risk of falling victim to FPX ANGE1’s Operator.

They also make sure to stay quiet and hide from FPX Shao’s owl drone coming up short which only ends up finding information on one ACEND member (that shoots the drone). Hence, with the lack of information FPX have they keep 2 members anchoring C site.

Slowly cNed begins clearing sewers by crab walking down with his Operator. His teammates stick right behind him to be able to trade him out. Eventually the awkward verticality between the bottom and top of sewers means cNed is able to find a pick on FPX ANGE1.

[1:28:45] Instantly after cNed finds the pick, a very systematic take of A site by ACEND begins. ACEND zeek pops Phoenix ultimate and begins running up sewers. He uses Hot Hands to prevent the FPX player behind main box in the middle of site from peeking A long. 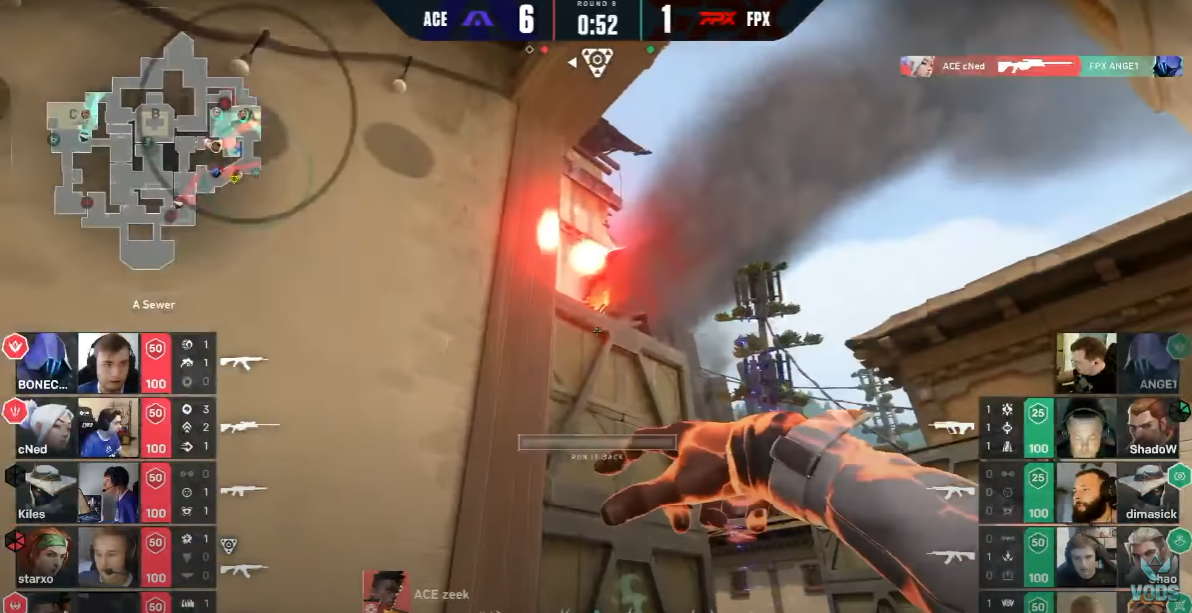 By doing this he coerces FPX ShadoW (the player mollied off) into taking a duel with himself which is very favourable since he is using ‘Run it Back’.

At the same time – [1:28:48] ACEND starxo uses his Skye bird to flash over on top of the site all the way from A Main. This catches FPX Shao off guard and ends up giving zeek a very free kill. 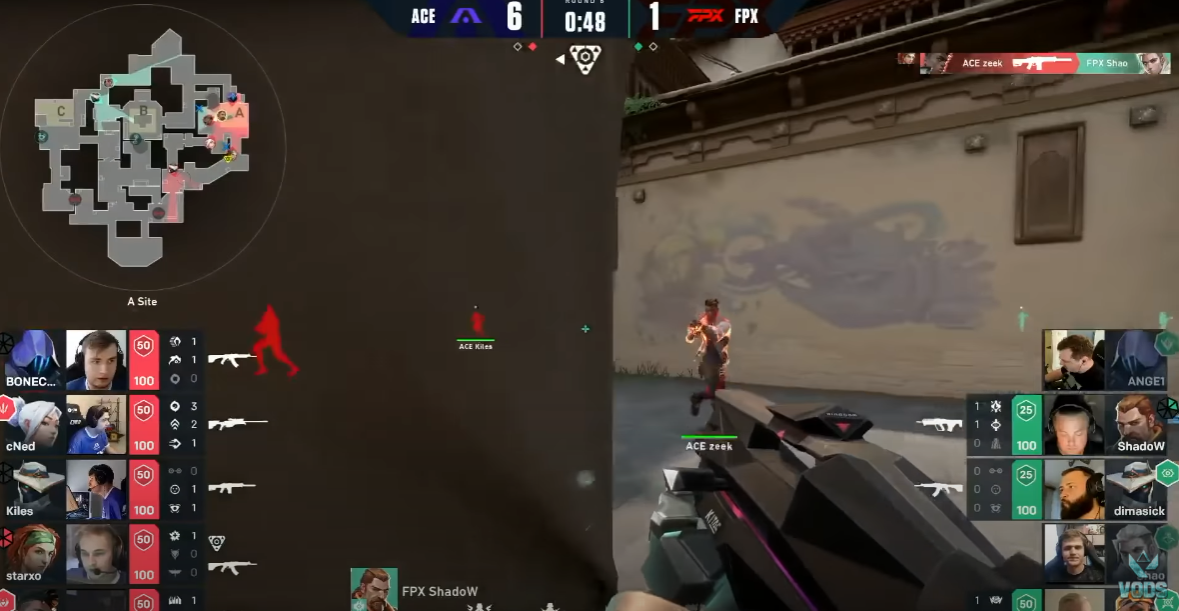 All the while ACEND BONECOLD (Omen) has managed to use his ultimate to teleport to Heaven and gain further control over A.

ACEND Kiles (Cypher) has set up trap wires down on A garden to watch over for the flank and the round becomes a certainty as it is a 5v2.

I do recommend watching some Pro play if you want to learn a bit more and improve your own VALORANT knowledge.

Hopefully, some rounds were a learning experience, maybe you now have a few new ideas when trying to collaborate with teammates.

Exy’s Phoenix Hot Hands over A main Ascent to block off tree room was a clever play that stood out to me and I might make note of it for my future games.

Best of luck with your climb!

To improve your coordination check out our article on How to Climb with a 5 Stack and be sure to consult our VALORANT Agent Tier List.