In this tier list, we rank the best weapons in Apex Legends across four tiers.

Remember that player comfort and playstyle should always come first, but there are always weapons that will rise to the top due to meta conditions and balance changes.

We’ll start off with our rankings and below, you’ll find commentary on each weapon as well as our methodology.

If you found this tier list useful, don’t forget to also check out our list of the best Apex Legends characters.

Check out our visual infographic version of the tier list below as well: 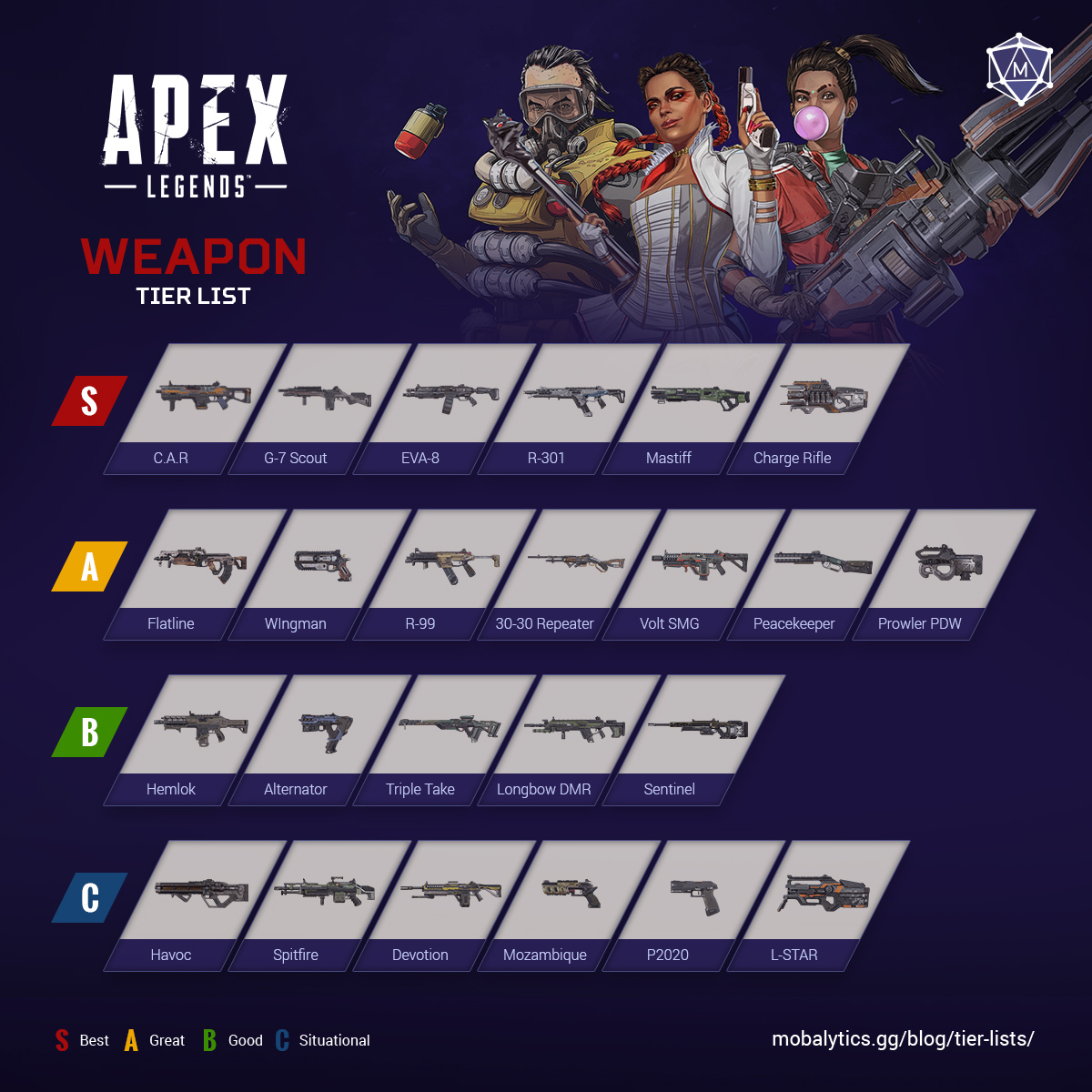 The C.A.R deals excellent damage in short and medium range encounters. If you’re able to learn the recoil pattern, you can take down enemies in no time. The versatility of being able to switch between heavy and light ammo cannot be understated. A great choice for SMG users.

The G7-Scout is a great marksman weapon, especially when equipped with the Double Tap Trigger attachment, it deals great damage at all ranges. The recoil improvements for this attachment have also made it easier to hit targets.

The EVA-8, much like the G7, receiving the Double Tap Trigger has turned a good weapon into a great one. You can take down enemies in no time in close to mid-range encounters. The recoil is easy to handle at close range.

The R-301 is always a great choice for assault rifles. The handling of the recoil is not very difficult, while providing great damage at all ranges. Even with iron sights, the R-301 shines from the first ring through to the final ring. Paired with an Anvil Receiver, this gives even more versatility to an already great weapon.

The Mastiff can deal huge damage at close ranges. The recoil may take some getting used to, but once you’re familiar with it, this weapon can quickly take down enemies. There are few guns which deal as much rapid damage as the Mastiff.

The Charge Rifle is great for primarily medium-long range engagements. The beam of this weapon is unlike any other in the game, you can put down enemies with a few accurate hits. The Charge Rifle can put huge pressure on enemies trying to push or rotate.

The Flatline is a great assault rifle that deals good damage at most ranges. With the Anvil Receiver, you can put a lot of pressure on the enemy team, preventing them from pushing. We would recommend you get some good optics on this gun, as the iron sights can be frustrating to use.

The Wingman is the best pistol to choose for most encounters. The gun is satisfying to use, and most importantly, it can deal huge damage with the Skullpiercer attachment. It is effective in short and mid-range encounters but falls off a little at longer ranges.

The R-99 is a solid choice for SMGs and can put out great damage in close and mid-range fights. The recoil is fairly easy to get used to and is improved with the laser sight attachments. In long-range situations it does decent damage but would be outperformed by an assault rifle.

The 30-30 Repeater is an amazing marksman rifle which shines in medium to long range battles. This weapon will punish enemies who aren’t in cover and give your team opportunities to push. Equipped with a Skullpiercer, this weapon deals serious damage.

The Volt is a good SMG that has little recoil for the damage it does. While it’s not as great as the R-99 or the C.A.R, it holds its own in short range encounters when you need it. The Volt is best used in short to mid-range as the damage tends to drop off at longer distances.

The Peacekeeper is a brilliant shotgun that can put out big damage in close quarters fights. While it is slower than the EVA-8, it still can be used effectively to peek a corner and down an enemy. With accuracy, this weapon is difficult to go up against.

The PDW is also a good burst weapon, though it performs poorly at long range. At closer range is where the PDW really packs a punch. When using this fully automatic, it does deal impressive damage, but also becomes difficult to handle due to the recoil.

The Hemlok is a decent burst fire assault rifle, with the option for single fire. This weapon is good at medium ranges, but its effectiveness drops off at close and long range. Single fire can deal reasonable damage at a distance, however, there are better choices for assault rifles.

The Triple Take is a nice marksman weapon that can shoot in a spread or choke pattern. The spread can be useful at medium range engagements, but you’ll struggle doing great damage due to the time it takes to focus your shots. The spread damage is also quite poor when compared to other rifles.

The Alternator is a reasonably good SMG, at close ranges is where it’s most effective. This gun feels poor due to the low rate of fire and small magazines. For SMGs there are better picks, but it can still perform well if at medium-close range.

The Longbow DMR can be a great weapon at medium-long range but is poor at close ranges. As a sniper, this weapon deals good damage and offers a higher rate of fire than other snipers. At range this can be a good choice for picking off enemies out in the open.

The Sentinel is a great sniper when engaging in long range fights. The iron sights are okay, and you can do good damage at mid-range too, but the reload times mean you must hit your shots. For long range fights, this is a great weapon, outside of this the usefulness drops off.

The Spitfire is generally a poor choice for most situations. The long magazines do compensate for the lack of range on this gun. You can give good support for your team, but outside of close quarters, the weapon performs poorly and lacks an impact.

The Devotion follows a similar story to the Havoc, where the delay to begin firing can cause you to lose a fight. Again, with a Turbocharger, this gun is great and does some of the highest burst damage in the game. But this requires an attachment you’re not guaranteed to loot, so generally it won’t perform to its full potential.

The Mozambique is an okay shotgun, dealing less than average damage. Without the Hammerpoint Rounds, this weapon is a poor choice. At close range it can be okay to escape some situations but there are better guns out there.

The L-Star is all round a poor weapon. The lack of range, poor recoil and damage all cause it to be a bad choose of weapon. The L-Star is outshined by most weapons in the game and you shouldn’t really use one unless you have no other choice.

The P2020 deals little damage and has poor range, even with attachments the gun does not significantly improve. This weapon is generally unremarkable and is overshadowed by many weapons in the game.

These weapons are easy to control and provide great damage against enemies in nearly all situations. You’ll want to grab these guns if you see them.

A-tier weapons are fairly easy to control, while giving good damage in most situations. They are a great choice of weapon and should be taken when you spot them.

B-tier weapons are okay to control and give reasonable damage in a few areas. There are better guns out there, but these weapons can perform well.

C-tier weapons can be poor to control and provide reasonable damage in niche circumstances. Outside of this, they aren’t a good choice – only pick these guns up if you have no other choices.

Thanks for checking out our list of the best characters in Apex Legends. Be sure to also check out all our other Mobalytics tier lists.

I began playing Apex Legends at launch, with the hype around battle royale games. It was the only game that captured a true BR to me. I enjoy finding tips and tricks for advanced players and noobs alike and helping players improve their skills.