All New Champions and Traits in TFT Set 5.5: Dawn of Heroes

Everything New in TFT Set 5.5: Dawn of Heroes

Set 5.5 of TFT was released on the PBE server during Patch 11.14! In this article, we will cover all of the new champions and traits.

We’ll also be going over all of the traits and champions that aren’t returning, so get your last few games of Set 5 in before your favorites are gone.

Keep in mind that the information for new champions are constantly being updated on the PBE. Our website will continually be updated, so make sure to check out the Champions Page to stay updated on any changes.

When does Set 5.5 Dawn of Heroes go live?

Here’s a quick rundown of everything leaving Set 5. 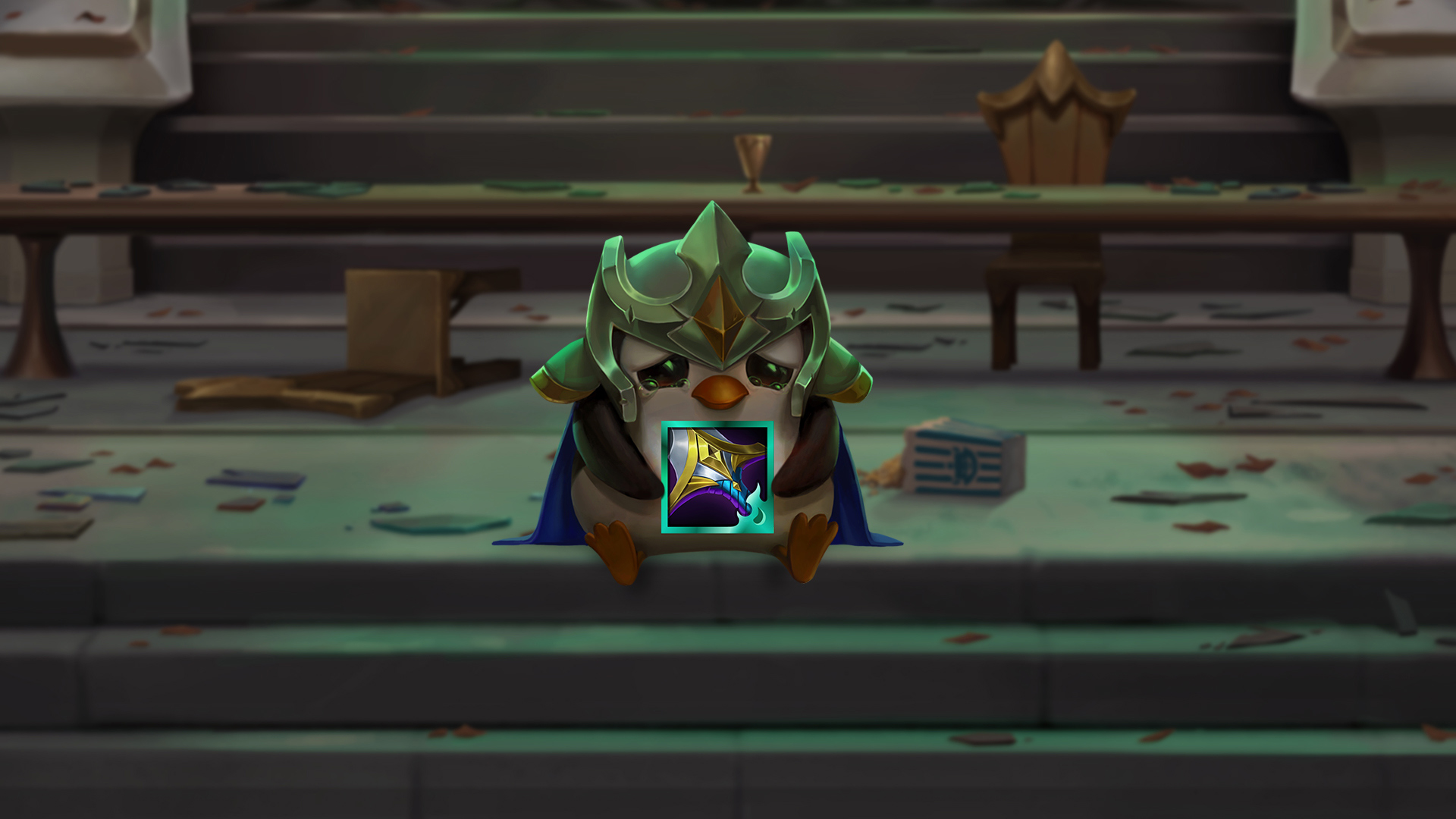 Shadow items are leaving TFT and are being replaced with Radiant items. Radiant items are extremely powerful versions of regular items with no drawbacks. Because of this, you will only get one Radiant component per game. 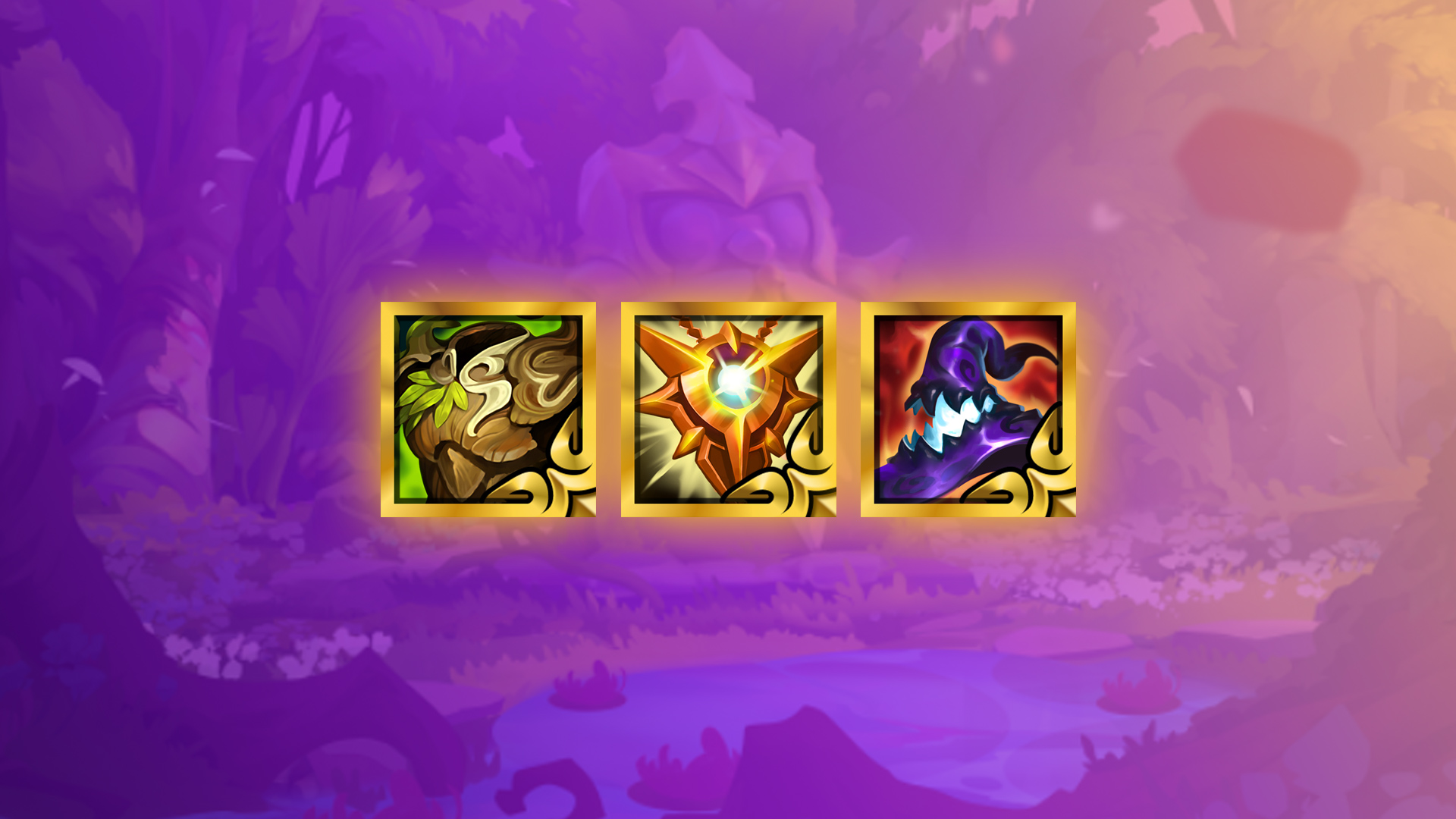 For a rundown of all the new Radiant items, check out our Radiant Items page to get familiar with the new items.

God-King is no longer a trait, so Garen will now have a new trait to replace it. Darius unfortunately is not coming back, but Garen will still be staying for this set.

Bonus: At start of combat, the Sentinel with the highest Health gains a shield that grants Attack Speed each time it is applied. When the shield is destroyed or expires it will pass to the ally with the lowest percent Health.

First Impressions: Sentinels are the new origin with a large vertical trait. This gives another option for a vertical team comp similar to how traits like Forgotten, Dawnbringer, or Nightbringer are used. We see lots of carry potential with units like Lucian, Akshan, and possibly even Irelia.

Bonus: When Victorious champions score a kill, their next attack is empowered to deal 40% of the target’s missing Health as bonus magic damage.

First Impressions: Victorious is the new origin trait for Garen that is replacing God-King. This trait looks to make him more of a threat rather than simply a tank utility unit.

Bonus: At the start of combat, Inanimate champions summon Harrowing Mist in the 1 hex surrounding them for 8 seconds, granting all allies within 50% damage reduction while they remain within the mist.

First Impressions: Gwen is already a menace in regular League of Legends, and her trait in TFT also makes her a very powerful unit. Gwen will likely be a very strong 5-cost unit that can fit into many team comps due to her utility.

Bonus: Every fifth Cannoneer attack is replaced with a cannon shot that deals a percent of that attack’s damage in an explosion around the target as physical damage.

First Impressions: Cannoneers are a new class that function similar to Rangers. They provide a smaller trait that you can focus around to build up your main carry. Most of the Cannoneers provide utility except Lucian and Tristana. These two look to have carry potential in their own comps. 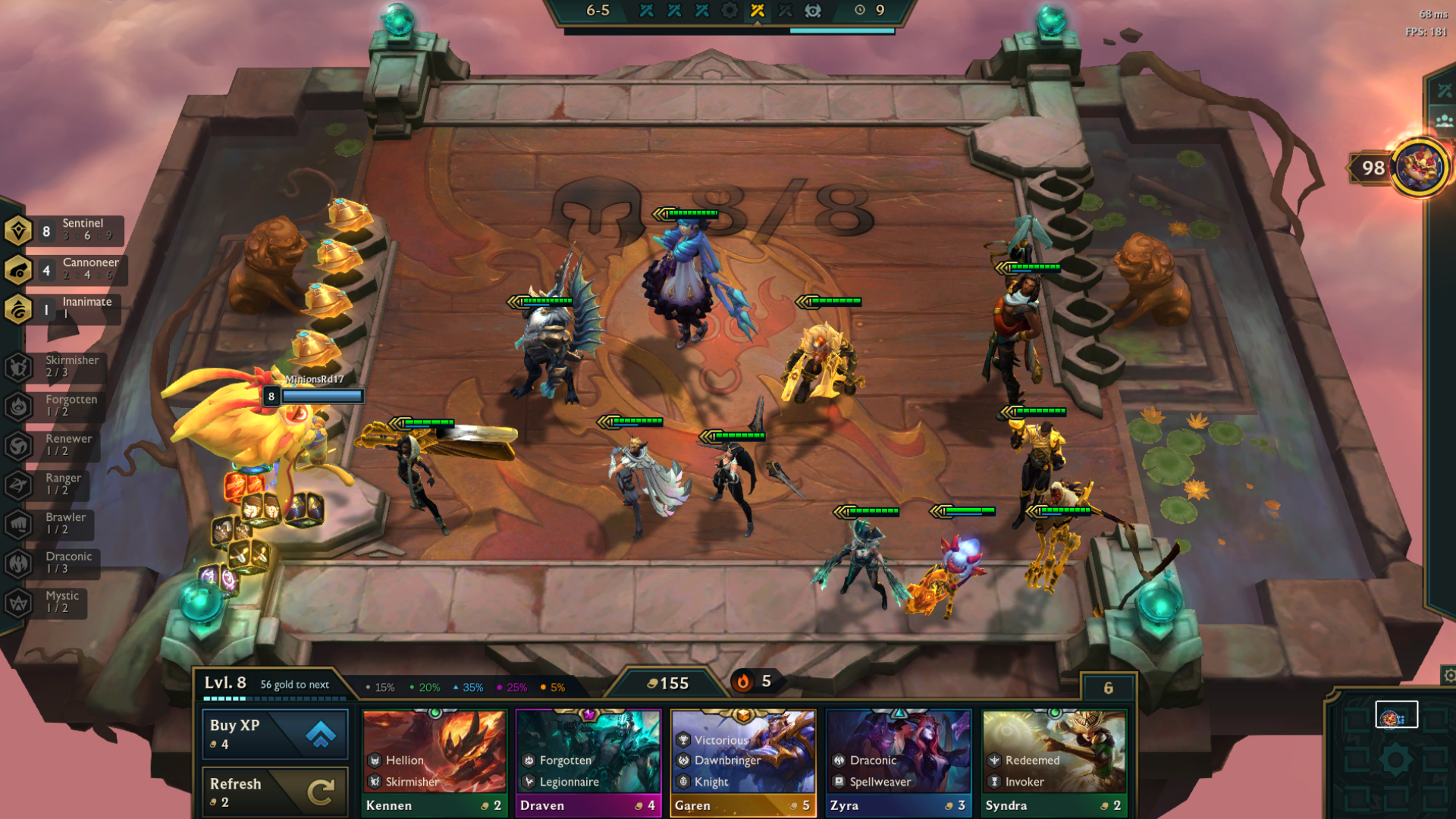 Let’s go through a quick rundown of all the champions in Set 5.5 There are a total of 12 new champions this update. We don’t currently have the stats for the new champions, but we’ll update our Champion Page as soon as they’re out on PBE.

We’ll be giving basic positioning suggestions for every champion to get the ball rolling for you, but remember that positioning is incredibly contextual in TFT and to always adapt to the situation at hand.

The terminology we’ll be using in this article will be frontline, midline, and backline. 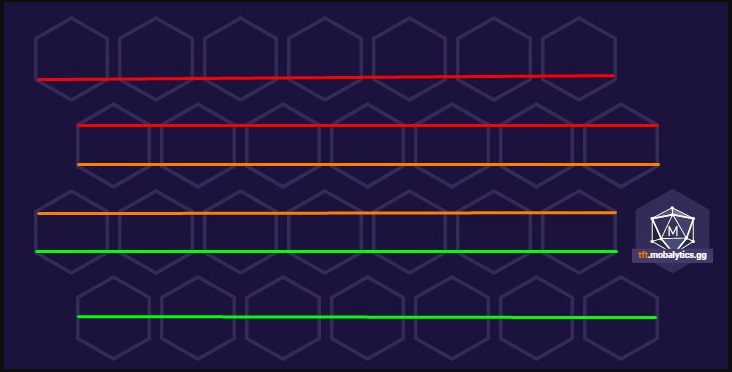 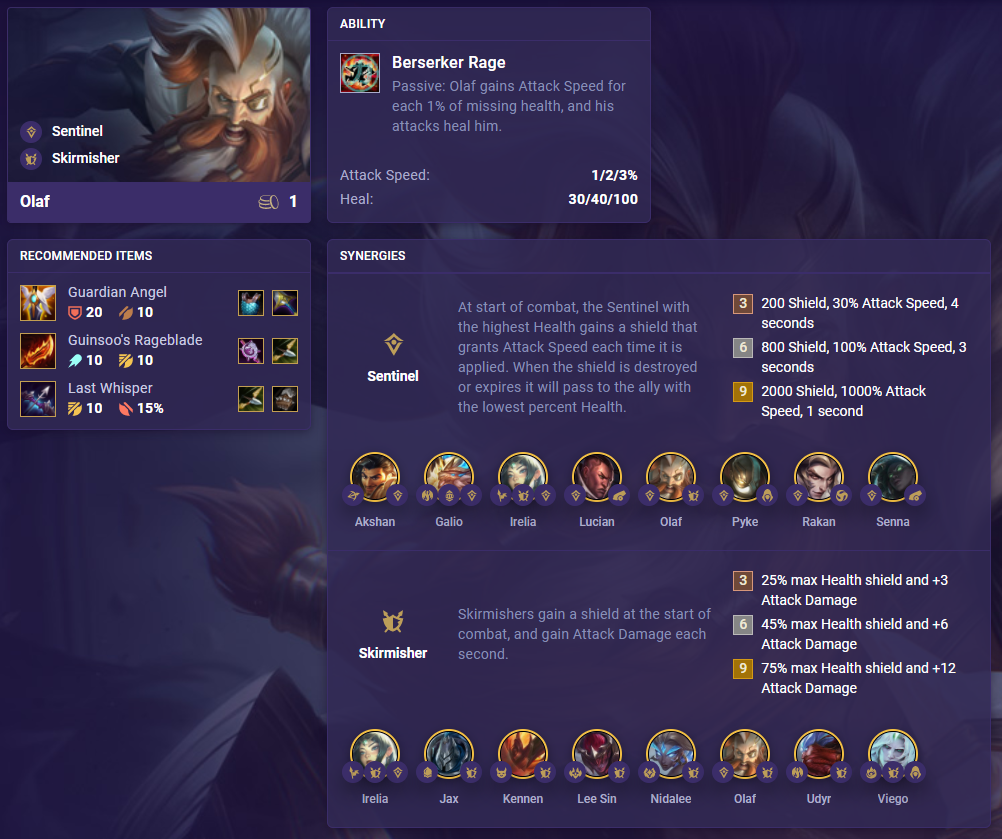 First Impressions: Olaf is coming back, but he’s only a 1-cost unit meaning his base stats are much lower than in previous sets. He will likely still be a great item holder, but his carry potential will need to be tested.

Tips: Having Guardian Angel is great on Olaf as you want him to get low health. The lower his health, the stronger he becomes. Guardian Angel allows him to safely get down to low health, and when he revives, he will have bonus strength from his ability. 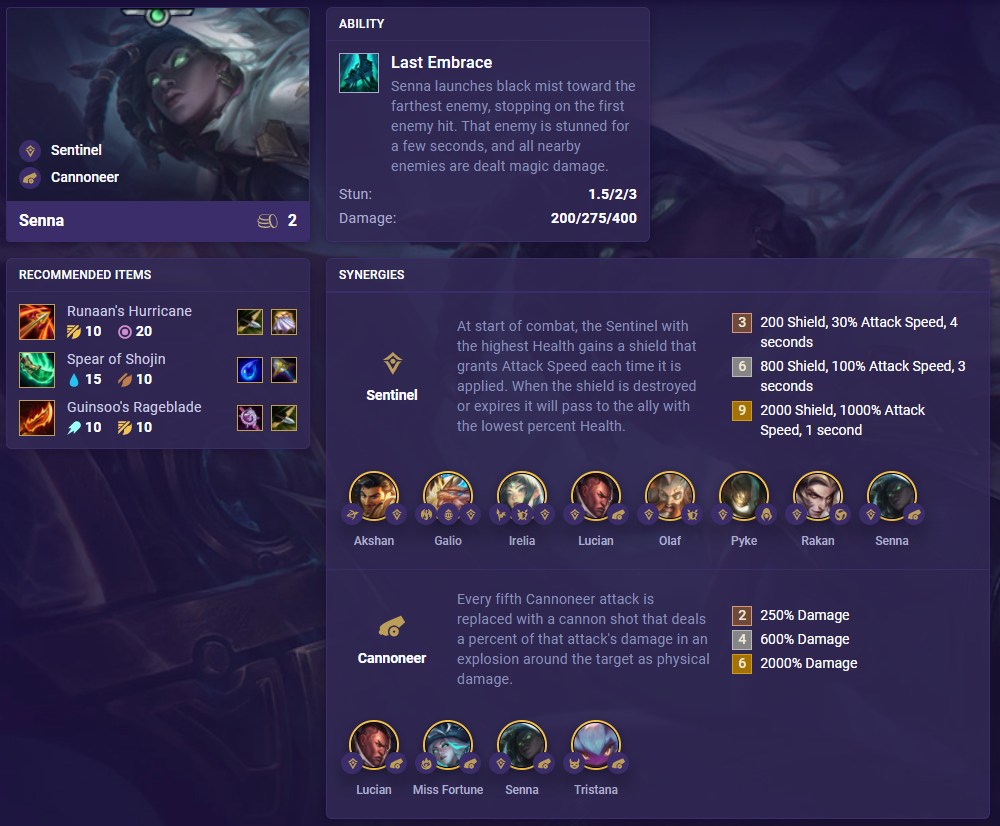 First Impressions: Senna has two new traits, and from the looks of it, she doesn’t seem to be a particularly strong carry unit. While we don’t know her stats yet, her ability makes it seem like she’s mostly there to provide CC rather than damage.

Tips: Senna will target the furthest enemy, but her ability will proc when it comes into contact with any enemy. Use this to your advantage and position her in a way that allows you to try and hit the enemy backline. 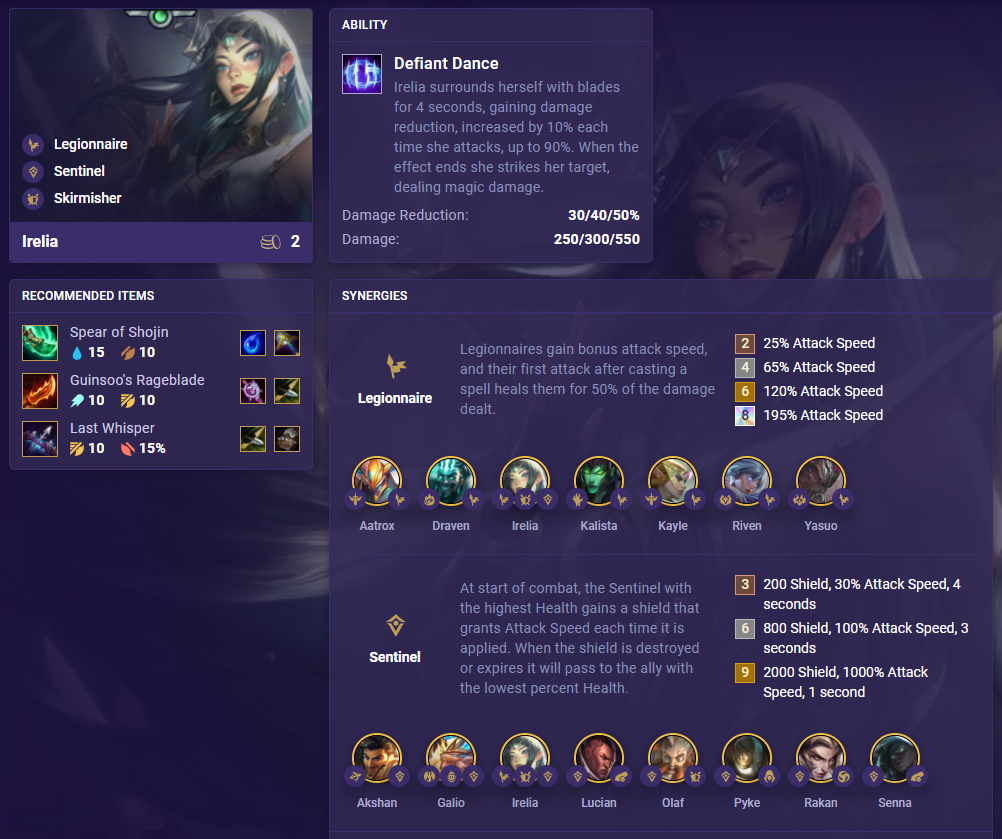 First Impressions: Irelia looks to be a 2-cost carry champion by the fact that she has 3 traits. She also has quite the strong ability as well.

Tips: Olaf and Irelia pair very well as they are both Skirmishers and Sentinels. By adding one more Sentinel and one more Skirmisher, you can have a strong early board with 4 units. 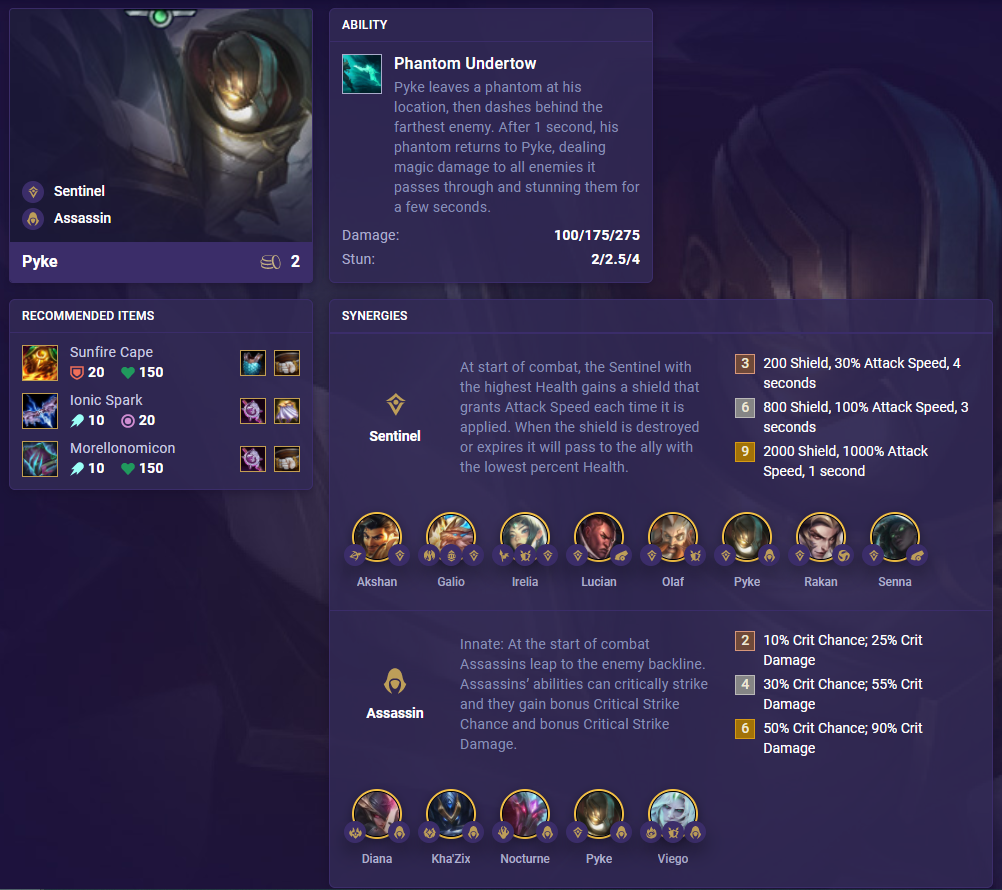 First Impressions: We’ve seen Pyke plenty of times now, and he has a great ability. His role in the game is to provide some solid CC for the traits he has.

Tips: Using items like Sunfire or Frozen Heart are great on Pyke as you can have him jump toward enemy carries. This will proc the item effects on important enemy units. 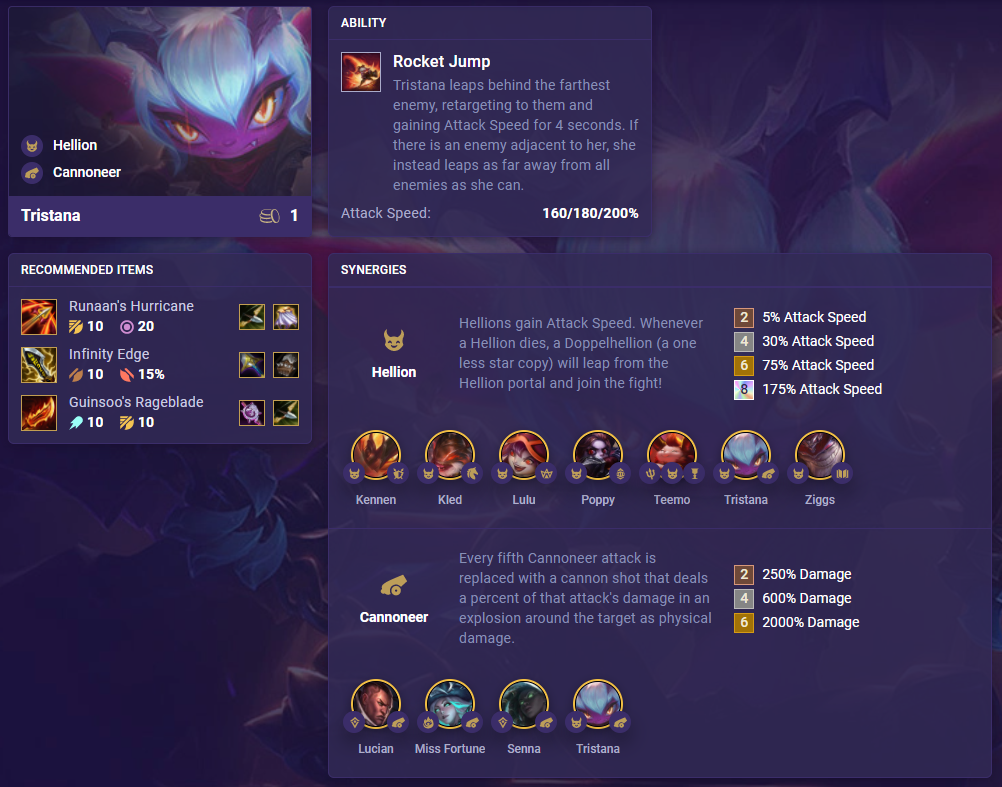 First Impressions: Tristana has a very interesting ability. She jumps to the furthest enemy with her ability, and will instead jump away from enemies when they are close. This is helpful for avoiding things like Assassins, but her regular jump can be tricky to utilize.

Tips: Enemy teams usually put a weak champion as bait in one of the corners of the board. You can use this to your advantage by having Tristana jump toward that enemy champion. This will keep Tristana safe from enemies for a little while longer. 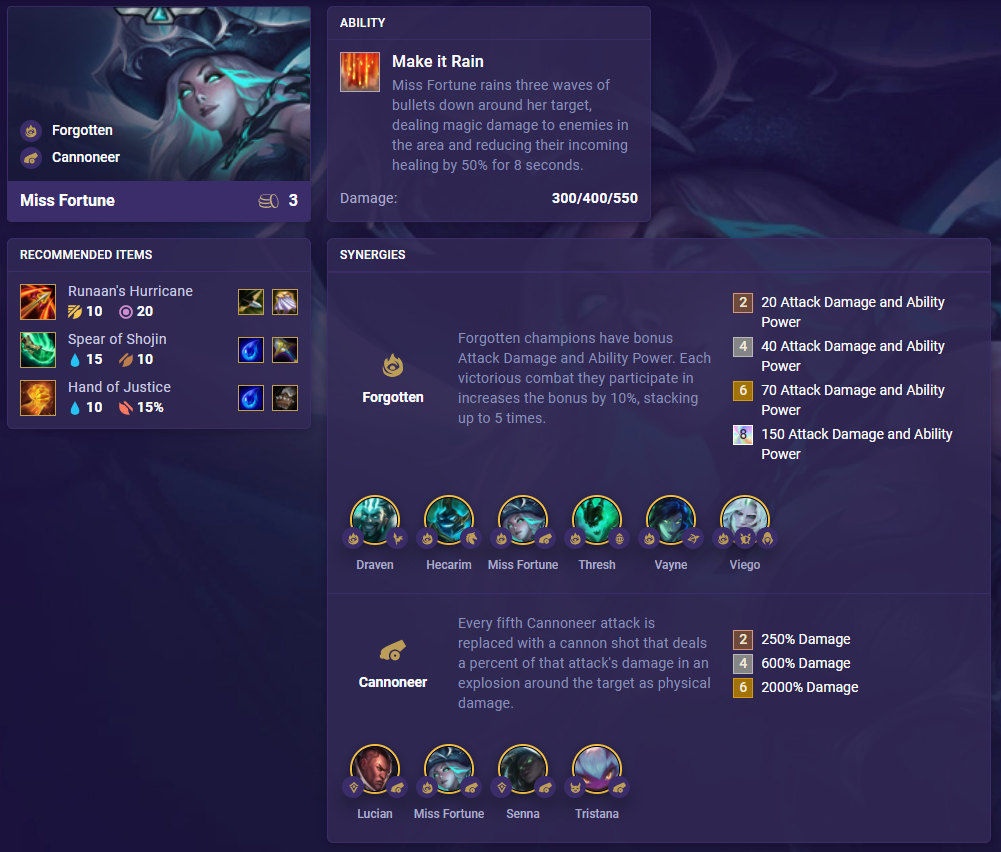 First Impressions: Miss Fortune is another Cannoneer that looks to be more of a utility unit rather than a damage carry. She is also a Forgotten unit, so she can help reach 6 Forgotten this way as well.

Tips: Miss Fortune already has an anti heal built into her ability, so items like Morellonomicon won’t be as powerful since you won’t need half of the item’s effect. 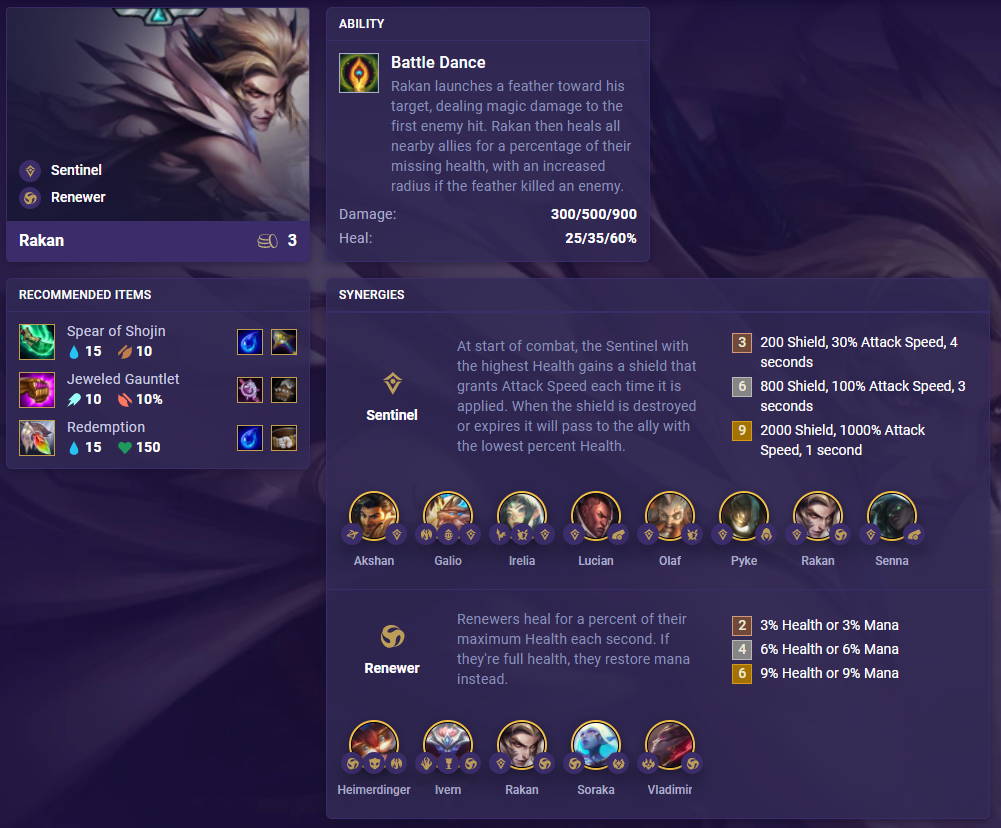 First Impressions: Rakan is back, but his ability has changed from previous sets. His ability is a simple single target damage ability with a bit of healing for your team. As such, Rakan will likely be a unit used mainly for traits. The heal is quite powerful, but has a short radius, so it can be difficult to maintain.

Tips: Since Rakan’s heal affects the units adjacent to him, you will  want to place him in the middle of all of your units. This way, the heal can ideally affect as many units as possible. 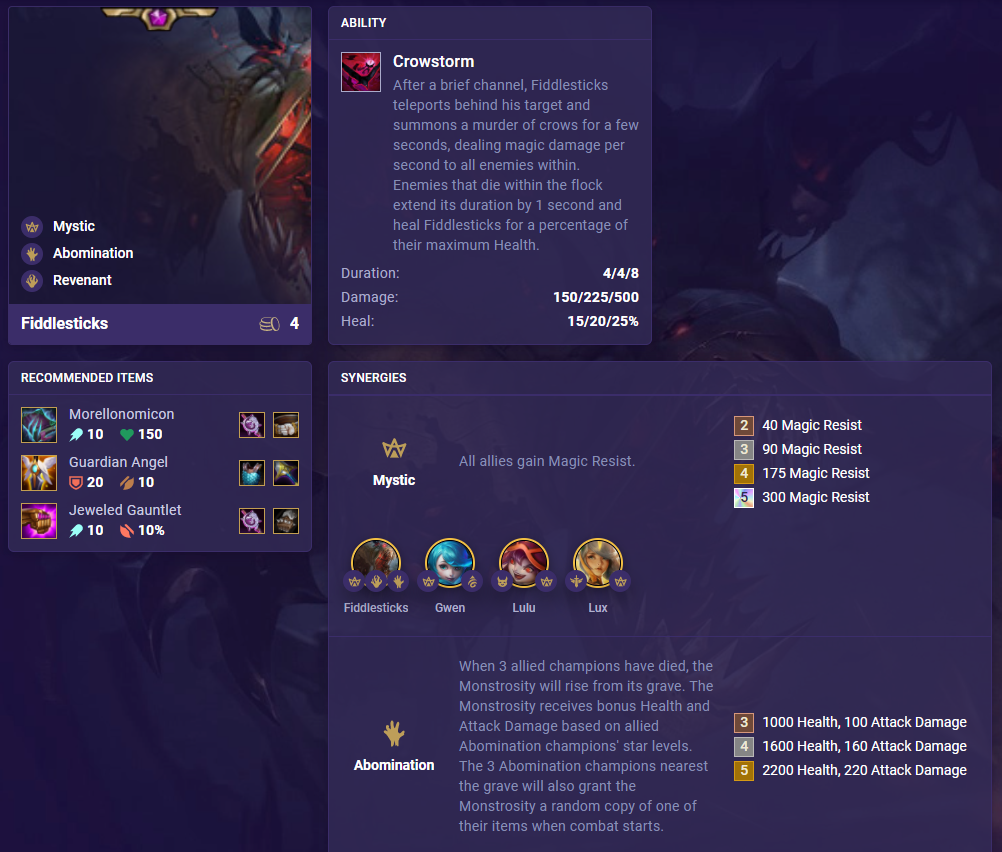 First Impressions: Fiddlesticks is a new 4-cost with his ultimate ability from League. The ability looks to deal quite a bit of damage, and it will be very powerful when placed well.

Tips: Since Fiddlesticks is a Revenant, you won’t need to have Guardian Angel on him unless you’re missing Revenant. With this, you can safely frontline him so that he can cast his ability quickly. 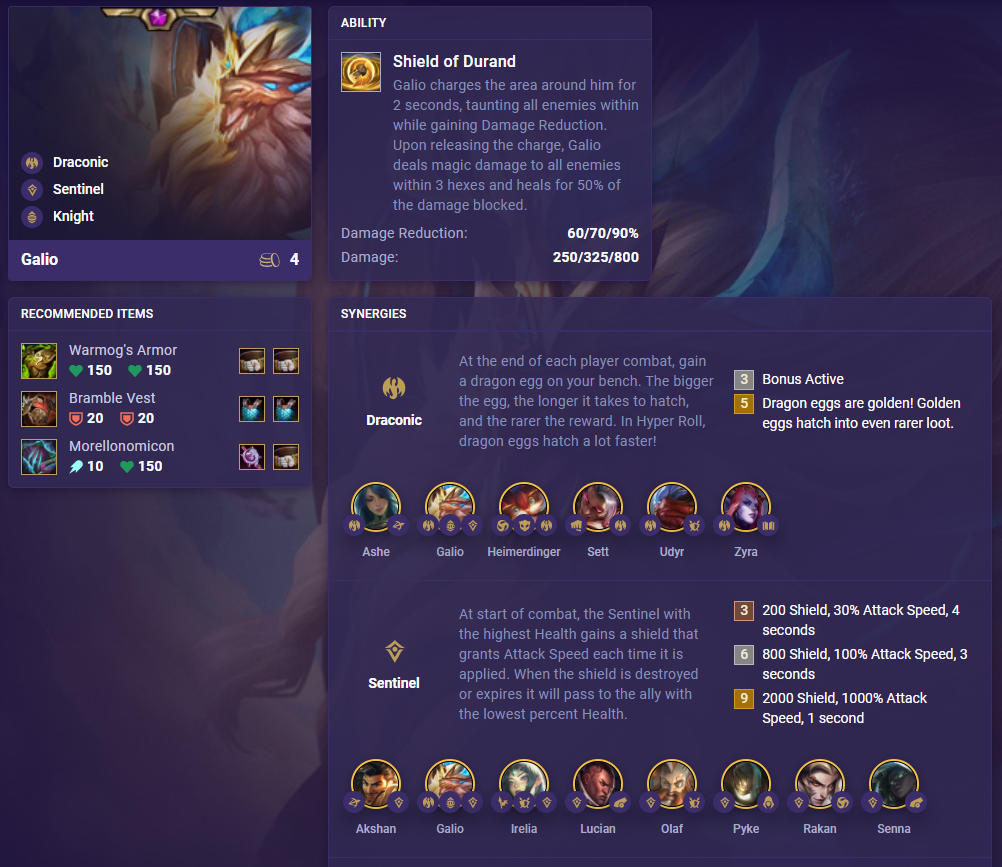 First Impressions: Galio looks to be an amazing frontline unit that will taunt enemies and has a lot of built in damage reduction with his ability. He is also a Draconic unit, meaning you can reach 5 Draconic without needing to find Heimerdinger.

Tips: If you’re playing against Assassins, you can also use Galio in the backline to taunt enemy Assassins away from your carries. 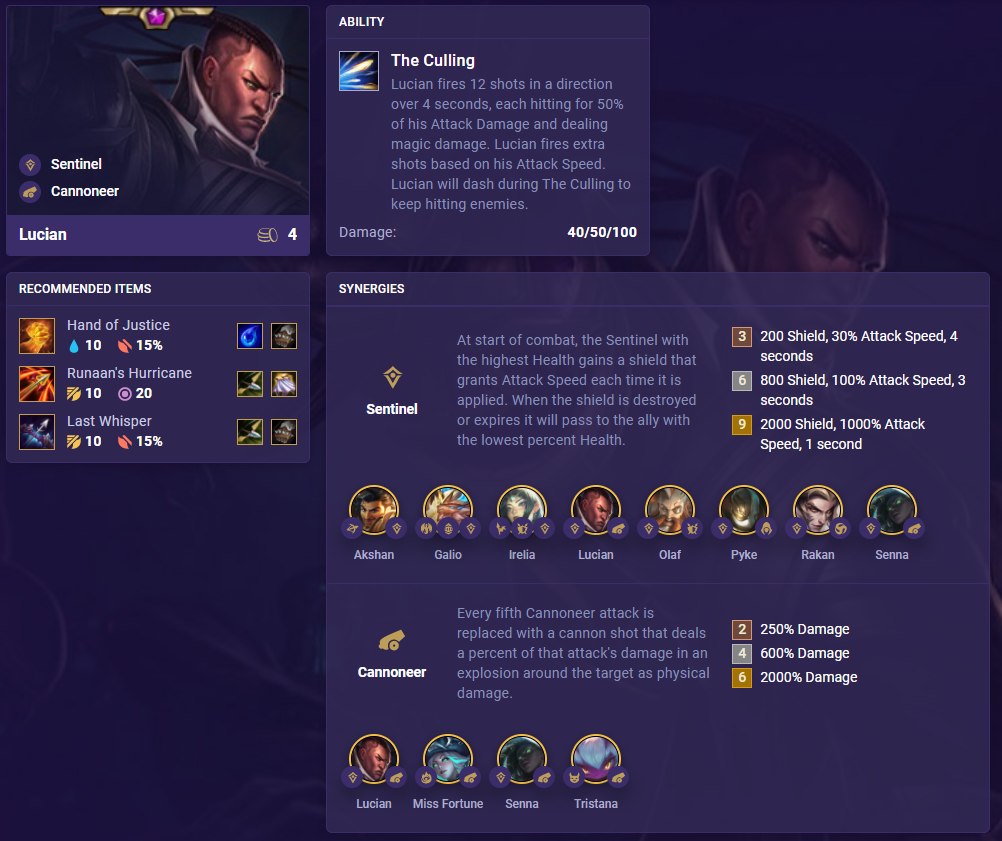 First Impressions: Lucian is back as a 4-cost carry, and he has the same culling ability as in previous sets. He has a lot of offense packed into his kit, so expect him to be a competent carry once Riot balance his stats and numbers.

Tips: Lucian scales very well with all sorts of damage. Attack Damage, Attack Speed, and Ability Power are all very strong on him. As such, he will likely have lots of good items, but players will eventually figure out his optimal items. 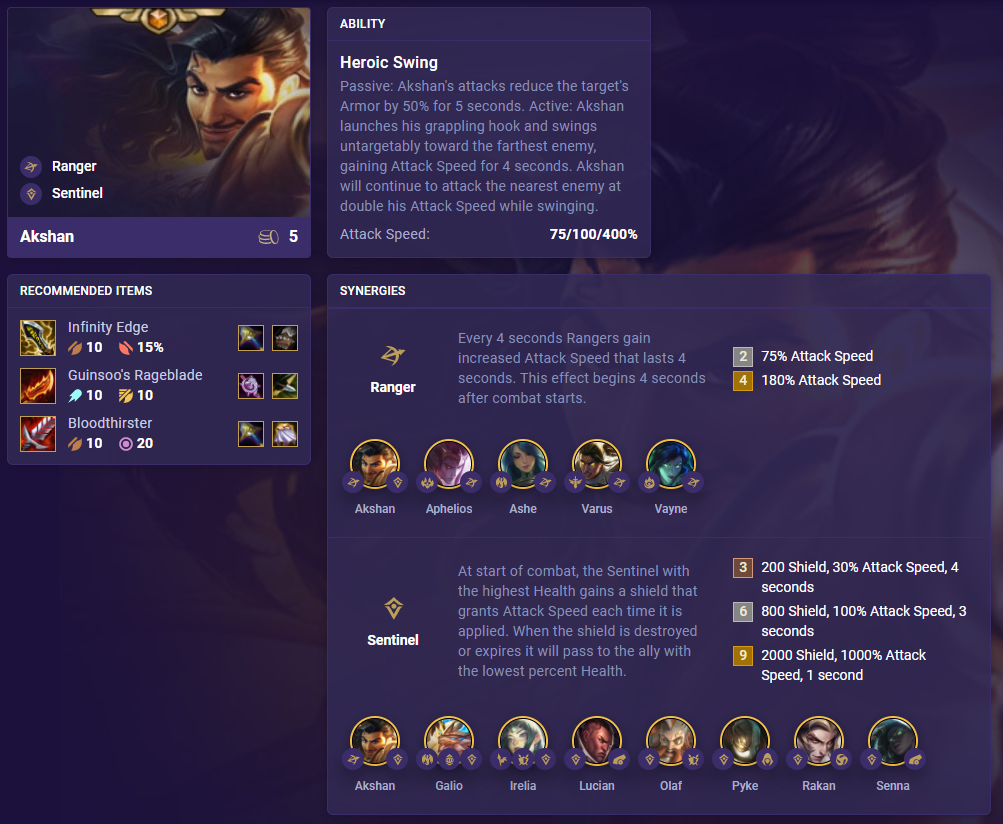 First Impressions: Akshan looks to be an amazing carry as he has a built in Armor Shred with his attacks. This means he can doesn’t need items like Last Whisper and can build other offensive items. Being untargetable while swinging also makes him a very tricky unit to take down.

Tips: Like many champions, Akshan will grapple the furthest enemy. Use this to your advantage when placing him to try and target enemy carries. 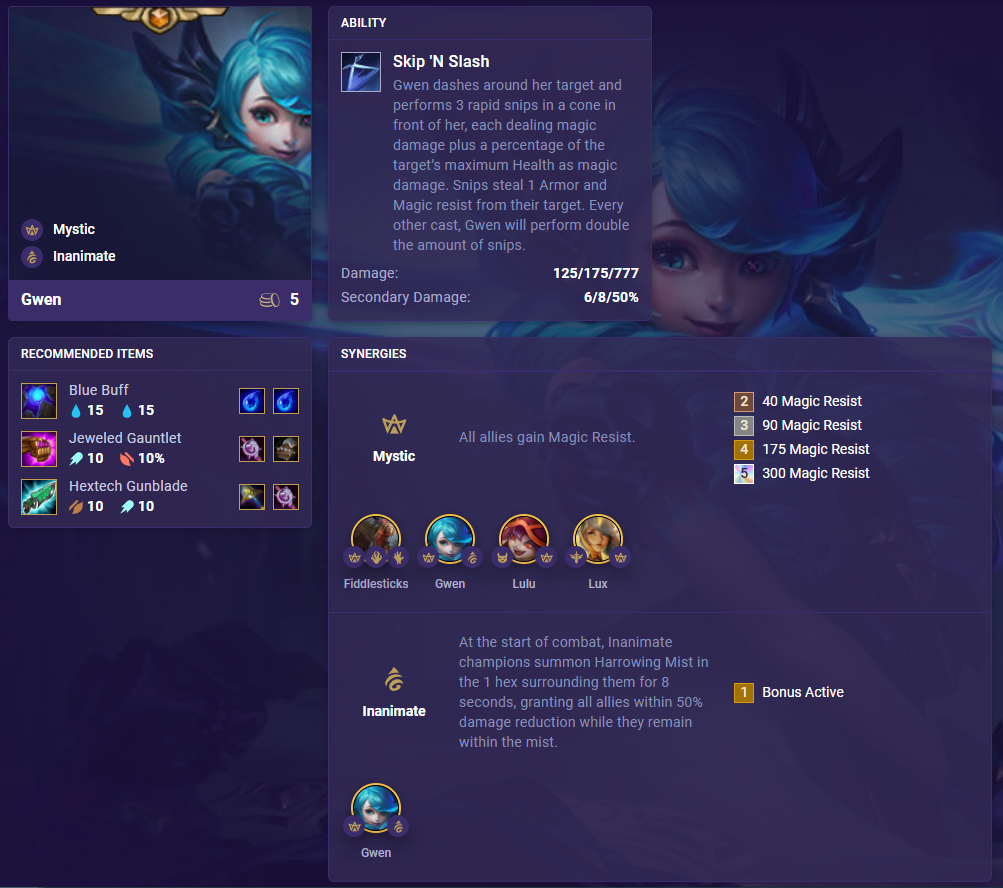 First Impressions: Gwen doesn’t have offensive traits, but her defensive traits make her an extremely flexible unit in many team comps. Being a Mystic is very flexible, but her Inanimate trait allows her to provide a lot of utility for any team.

Thanks for reading! Head to our Team Builder to start theorycrafting and be sure to check our best meta comps to find another answer to climb with once TFT Set 5.5 hits live!