The Sorceress is the quintessential mage archetype in Lost Ark. If you have ever played a Sorc in Diablo 2 or 3 or even a Combustion Fire Mage in WoW, you will feel right at home.

They are known for being able to do a ton of damage safely from afar, as well as control areas of the battlefield with their spells and status effects. Of course, given that they have so much that they can do safely at a distance, they are squishy.

Every single Sorc spell has an AOE component and many of them can wipe out hordes in a single cast.

Some of the harder-hitting ones are used as primary single-target damage spells. Major damage spells have cast times, although you can often spec to remove the cast time for a slightly weaker output.

The Sorceress’s fire spells have destruction (weak point) attached to them and the class has a respectable amount of stagger, although definitely not top tier compared to a class like Scrapper or Gunlancer. Many of their spells have status effects attached to them, such as Burn, Ignite, Freeze, or Elecroctute which help you control the battlefield.

If you are looking for a class that can do lots of damage through huge burst or consistent damage spam, while being safe and far, look no further. Sorcs are easy to pick up and play because of their lack of attack positional requirements, but they are difficult to master so you can find a lot of nuances that may appeal to you. If you’re interested, you can also check on our Sorceress leveling guide.

To learn how to play the newest mage sub-class, check out our Lost Ark Arcanist guide.

Currently, there is only one other mage class, the Bard. Bard is a support class that does some damage, while the Sorc is the pure damage mage.

Compared to the other ranged damage classes in the game, you have a lot less mobility but more impactful spells that can control the battlefield as well as do pure damage. The one exception is the Artillerist which plays like a Tanky less mobile caster.

In order to see how well Sorceress performs in the current meta, check out our tier list.

Sorceresses build up their Mysterious Magick Meter by doing damage with their spells. You have a few options on how to use it:

You will spend most of your time as a Sorc alternating between your instacasts and waiting for windows to cast your bigger spells, depending on which playstyle and spells you choose.

You will also pay attention to your positioning to set yourself up for succeeding by using your movement ability thoughtfully to dodge boss attacks. Don’t lose sight of the main reason you are in the group – to do tons of damage!

In PvP, Sorcs would be wise to stay away from long cast time spells and focus on spells that can do small amounts of consistent damage safely. By combining consistent damage with the ability to control the battlefield through AOE status effects, a good Sorc can set the tempo for the match.

The bane of any Sorc is good melee, sticking to you and chasing you, especially Deathblades. By using your mobility wisely and coordinating with your team, you can play keep away and continue to be effective with your instacasts.

Summoning thunder from the sky is what being a Mage is all about. This is one of your hardest-hitting spells and has a cast time, but can be talented to be instant cast. It’s great for single target or AoE, and has high stagger.

This is a staple spell all Sorcs will use. It’s not very exciting but it reliable shooting a line of fire that is safe and easy to land on enemies, applying a burn over time effect. It can be recast quickly and can amplify the damage of all your spells.

Summon a pillar of flame that knocks up and incinerates enemies in the target area. This spell does respectable single target damage and can stagger and do weak point damage.

Summon a wave of elemental damage to push back the enemies in front of you. Depending on how you talent this spell, you can burn or chill foes. Has a short cooldown and can be cast often to do area damage and keep enemies away.

Nobody wants to be a mage that can’t drop a giant flaming rock on people, right? This is your hardest-hitting spell and has plenty of stagger to boot. Be careful though, it has a long cast time and a delay on impact, so you need to really understand the boss’s attack patterns to reliably land the spell.

As with all classes, the Sorceress has access to two awakening abilities.

Gather power to do massive lightning damage to all enemies around you. This pulls opponents in and hits them repeatedly while staggering them to a giant supernova finish. Very powerful ability that makes you immune to all CC while casting.

True to its name, cast this to reign infinite destruction in the area around you. Meteors will fall from the sky for 8 seconds and do massive damage to anyone they hit. Unfortunately, you have no control over where they land so there’s a lot of RNG in how effective this will be.

Most people use Enviska’s Might exclusively since the RNG nature of Apocalypse Call makes it unreliable.

Every Lost Ark class has access to engravings that will focus your playstyle in one particular direction. For Sorcerers, you will choose between Reflux and Igniter. They are two completely different playstyles. 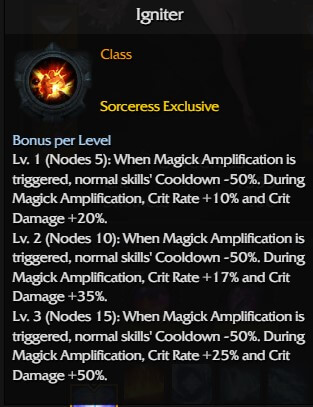 If you want to have some of the highest burst in the game (BIG NUMBERS!), this is for you. This engraving will heavily amplify the effect of your Arcane Rupture Identity skill, giving you massive crit and crit damage.

The downside is that if you miss your burst window upon activation, you will lose most of your damage. Since all of your hardest hitting skills have a cast time, unless you know the boss’s patterns really well- you will probably miss… a lot!

Any of the three damage stats will work for this build. You want specialization to build your meter faster and do more damage with your spells. You get innate crit from Arcane Rupture and you can always add more to make sure you see the big numbers. Swiftness is also good to fit more spells into your burst window. 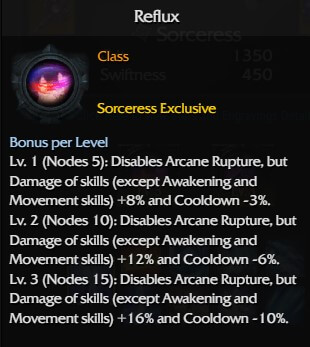 This engraving completely removes your ability to use Arcane Rupture, but it gives you increased damage and decreased cooldowns at all times.
What that means is you can use all of your identity bar on blinks.

This makes the build one of the most consistent and safe damage builds in the game. With low cooldowns, you can spam instant casts all day or use bigger cast spells if that’s your style. It just depends on what you are comfortable with.

Unlike the igniter build, you need to be careful with your secondary stats. Specialization is not very useful for you since you don’t need to build meter, and you should focus on crit with some swiftness.

There are two main builds show below: Igniter and Reflux builds. 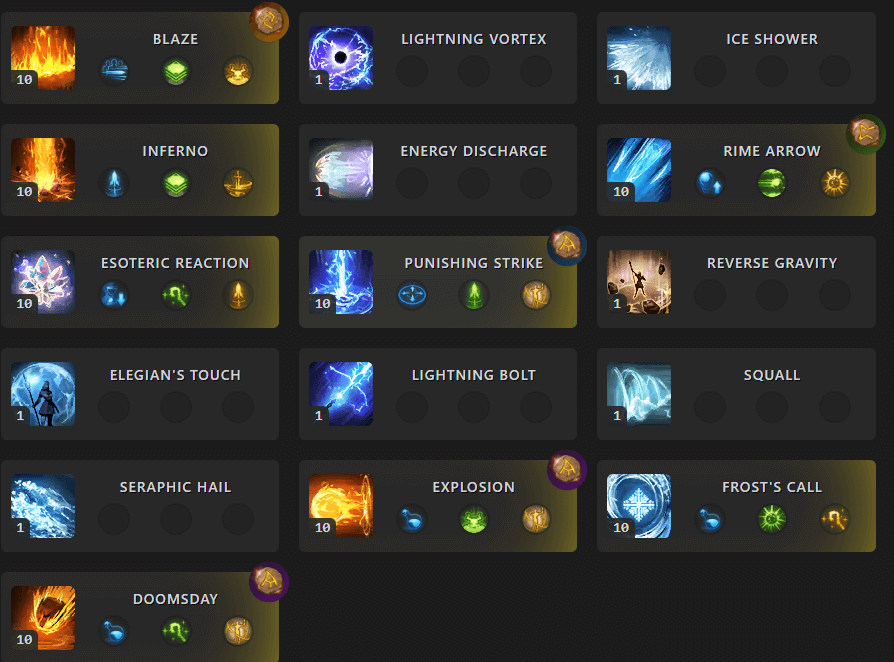 This build encourages you to take all the hard-hitting long cast time spells like Doomsday, Explosion, and Punishing Strike. Your focus is to build meter and cast all your spells in quick succession after activating your identity skill. Ideally, this is done during a boss’s vulnerability phase. 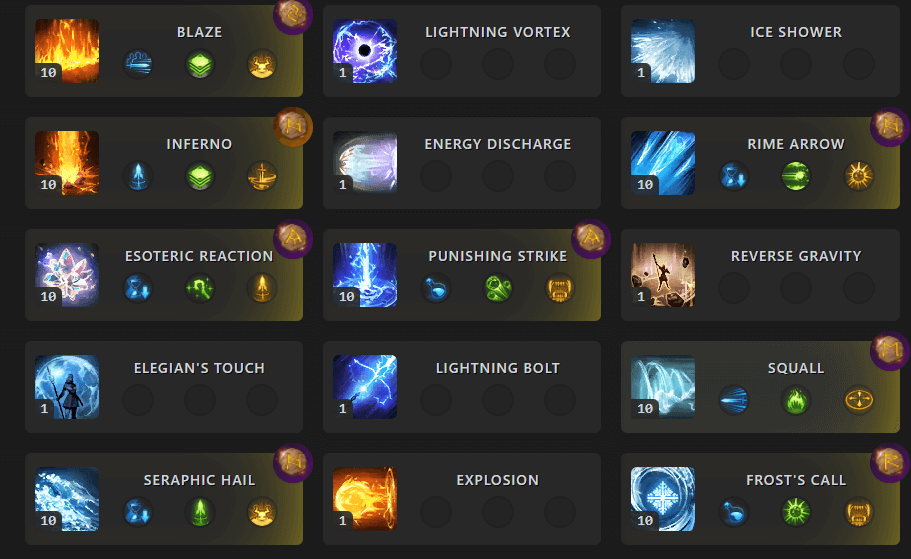 This build can be played two ways: you can zip around the battlefield with instant cast spells or you can be more methodical and use the same hard casts from the igniter build. We recommend the instant cast build and will go over it here since the primary strength of this build is safety and consistent damage.

Here are some of the skill explanations and tripods you will take (Make sure you have 4 points in every spell and then max them out in the following order):