Artillerist is a sub-class of the gunner class in LostArk. It breaks the stereotype of ranged class who are usually fast and squishy. Artillerist is heavy and slow and known for being able to do a ton of damage safely from afar, and with the help of the decent defenses,of an artillerist they can facetank some high damage mechanics easily.

Every single Artillerist skill has an AoE component and many of them can wipe out hordes in a single go. Some of the harder hitting ones are used as primary single target damage skills. Major damage skills are delayed damage where it takes 4 seconds to land and there is nothing that can be done to reduce this time.

Artillerist also has his shield skill that can be immune to knock backs & paralyze state if maxed, just like the Gunlancer identity shield. In addition to the extra 20% defense from their class engraving regardless the level of the engraving, this makes Artillerist so far one of the tankiest classes in game along with destroyer.

Artillerist identity is one of a kind. It turns the Artillerist into a big turret. This locks the player in one spot but it deals massive amounts of damage with the help of turret mode skills that can easily melt your opponent.

Turret mode also makes Artillerists immune to knockbacks & paralyze states and it has a shield skill that lasts for 8 seconds and absorbs 30% of the Artillerist’s HP in damage.

If you are looking for a class that can do lots of damage through huge burst or consistent damage spam, while being safe, look no further. Artillerists are easy to pick up and play because of their lack of attack positional requirements, but they are difficult to master so you can find a lot of nuance that may appeal to you. If you’re planning to level up this class, please, read our guide on how to level up Artillerist.

Comparing it to other shooter sub-classes, artillerist is the tankiest and has the highest stagger but lacks any of the mobility.

The ranged DPS Artillerist might feel closer to is an Ignition Sorceress with lots of delayed spells that function as high damage nukes.

If you want to know how well Artillerist performs in the current meta, visit our article on best classes in Lost Ark.

Artillerists buildup their identity gauge to get his “Firepower Buff” which allows him to deal extra damage, with the help of “Firepower Enhancement” engraving, the “firepower buff” will have extra crit chance depending on the gauge stage.

You will spend most of your time as an Artillerist tanking mobs and waiting for your main damage to land, and when it comes to bosses/guardians, Artillerist should be holding the delayed damage skills until the opponent boss start performing a certain mechanics that lock the boss into place allowing you to safely cast your skills.

This makes Artillerist a class that requires a good knowledge of bosses mechanics to land all your skills.

In PvP, Artillerist is an easy choice to win against new/average-knowledge players, it’s a perfect backline class in arena and GvG fights. In solo 1v1 fights artillerist should wait for the perfect moment to stun their opponent and perform the “deadly combo” that will drain half the opponent’s HP in a few seconds.

The bane of any artillerist is a good CC class, sticking to you and chasing you, especially Sorcs. By using your shield wisely and coordinating with your team, you can play keep away and continue to be effective with your instacasts.

For those of you who are curious, the Artillerist “deadly combo” is the following : Gatling gun > space > swing > Homing Barrage > Air Raid > Howitzer > Napalm Shot

Starting from swing skill this combo takes 5 seconds to land everything. Swing stun lasts only for 3 seconds, howitzer & napalm help to keep the target knocked up for extra 2 seconds to land homing barrage and air raid.

Artillerist installs a mortar that launches a shell into the air, then drops in a specified location dealing damage and knocks enemies up into the air.

This skill has some tripods to change the core damage into element (fire, water or lightning) for extra effects and needs 3 seconds to land.

Artillerist sets a mine at a close range point then a nuclear missile drops onto that mine dealing heavy damage and destruction (weak point) after 4 seconds.

Artillerist holds his cannon and starts flaming his opponent for 3.5 seconds, you can’t change the skill direction once it starts. The damage of this skill can be changed to elemental damage with tripods.

Artillerist releases five missiles dealing damage to random targets, which finishes in 3 seconds. The amount of missiles can go up to (14 missiles) with tripods. The damage of this skill can be changed to elemental damage with tripods.

Artillerist installs a turret that helps him for 10 seconds shooting nearby enemies with physical damage.

Artillerist drops a great turret that auto target the nearby enemies and start lasering them, you can change the target of it manually by pressing (shift) on your keyboard while holding your right click on a target.
The great turret has 1 extra massive laser attack to trigger after installing by pressing V once again.

This launches a barrage of 20 missiles onto enemies at your cursor position inflicting physical damage. This can be handy in a chaos dungeon or used as a (burst) damage awakening.

Every Lost Ark class has access to engravings that will focus your playstyle in one particular direction. For Artillerists you will choose your engraving depending on the playstyle you like, between highSwiftness build or high Specialization build. They are two completely different playstyles.

This class engraving must be used regardless what playstyle you’re on, since it enhances your Crit chance and gives you extra defense.

Firepower Enhancement (as the name of it already explains) increases artillerist defense by 20% and adding extra Crit chance buff along with the normal firepower extra damage buff, which is really important at the every stage of the game (early -mid -end) game.

This also helps a lot in equalized content since your Crit points drops with equalized instances restrictions.

If you enjoy the Artillerist identity skill (Turret mode) this engraving is for you, it will enhance the damage of the 3 extra skills by (20/30/40%). Also if the Artillerist isn’t affected by firepower effect, it increases the amount of accumulated energy by (10/20/30%) and it removes the cooldown effect of the firepower buff.

With this engraving, Artillerist needs to change his playstyle to high specialization points to enhance turret mode damage to get the most of the extra damage from the barrage enhancement engraving. 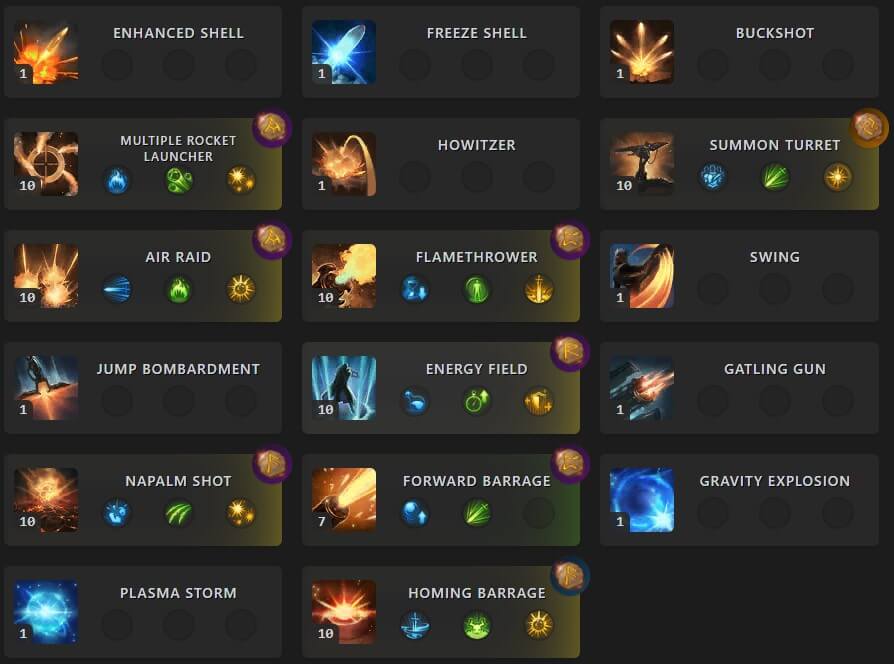 This build relies on cooldowns – Artillerist usually goes for max agility with some Crit to balance it out, because you need (Air Raid & Homing Barrage) to Crit all the time.

This build helps Artillerists to survive the most due to low CDs that allows them to use shields often, but the overall damage will be average.

In this build, the Artillerist uses turret mode to skip some mechanics by pressing Z then casting the shield if the normal shield is on CD. 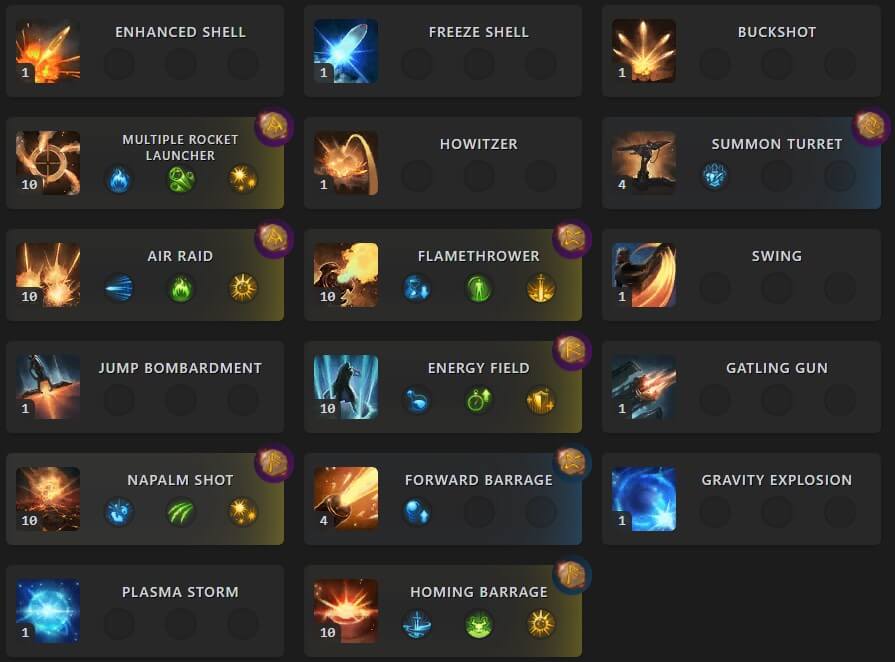 For this build you have to be a little bit careful when performing the harder content like Velganos or Argos, because you don’t want to be stuck on Turret Mode while the boss is performing a wipe mechanic.

It’s slow build with very high damage but lower survivability, so your knowledge with every mechanic is a must.

Unlike the Swiftness build, artillerist uses Turret Mode to deal damage not to skip mechanics.

When jumping in Turret Mode try to land the Howitzer skill 1st since it debuffs the opponent with -12% defense reduction for 12 sec.

Here is some info about Z mode skills that’s not mentioned anywhere:

Note: in spec build Artillerists can switch between “Napalm Shot” and “Swing” depending on the situation of the raid. If some bosses need higher stagger, use Napalm Shot, if not, keep using Swing.