Season 11 finished a few weeks ago, and the final ranks have been locked in. Were you able to achieve the goals you set out for yourself earlier in the season? Don’t worry if you didn’t. Theres always next year to hit your goals. Take a step back, reset and prepare for Season 12.

If you didn’t hit the goal that you set yourself out for, it’s probably due to various reasons that we will be listing in this article. Ask yourself if any of these apply to you (they probably did), and try to work on them next year.

If you’re looking to up your game or want to improve at League of Legends, sign up to Mobalytics for more tips to improve your climb!

Sticking to the same champions and the same role is critical in the longevity of your climb, especially if you want to get to the high ranks and play with High ELO players.

When you play multiple roles, or play fill in LoL, you’re reducing your chances of winning games because you may not have the experience to dominate the lane and carry the game. For example, an auto-fill mid laner will lose against a mid lane one trick as they’ve spent a lot of time playing the role.

I would suggest that you try and play the same champions and roles and avoid switching too often. The fill role is a nice idea for normals, but I wouldn’t recommend filling in ranked.

Did you fall into the fill roll at times? Or did you switch it up from your main role frequently? If you think this is something you did, look at how many games you played on alternative roles to your main or secondary role. Think of all those potential wins you could’ve had or the LP you could have earned by playing on your main.

2. The Amount You Played

You do have to grind League if you want to achieve the ranks you desire. You probably won’t get where you want to if you only play 50 games or so across the season. This is why you must play a lot of League of Legends if you’re going to climb and realise that you have to play a ton of games if you want to make any considerable growth in League.

There is a fine line between playing to climb and playing for the sake of it. It’s important that you notice that you’re playing on auto-pilot and not focusing. Stick to ranked when you’re ready to play climb, and stick to normals when you want to mess around, when you’re sleepy or when you’re tilted.

Check out how many games you played by looking at your Profile on the Mobalytics site. In season 11, I played over 400 games in ranked and more in normal games. 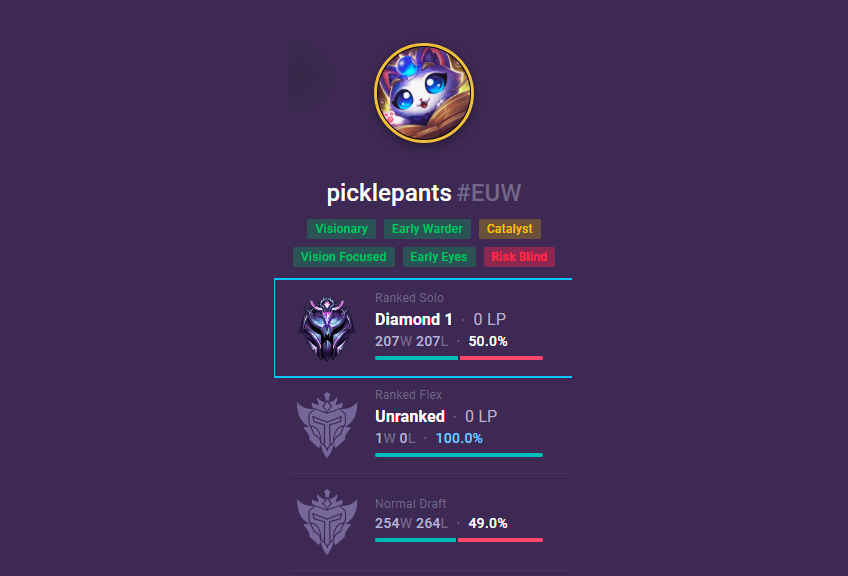 Builds are critical, and if you’re not building the best items for your champion, you’re doing yourself a disservice.

When it comes to buying items for your champion, you need to have the best and most updated build and buy items that work great for your champion. I can’t tell you how many time’s we at Mobalytics have looked at players profiles, and they’re purchasing random items for the champion they’re playing.

If you want an easy answer, download the Mobalytic’s App. Use the auto-import feature and take the best builds and Rune choices in the game for the champion you’re playing. Our App alone will solve this issue if you struggle with builds. Auto-importing not your thing? Check out the Mobalytic’s Champion Pages to see more builds for your favourite champions.

4. You Died Far Too Much

Dying in League of Legends is something that happens to everyone. Sometimes, it might be your fault, and at other times it is your teammates’ fault. Realistically speaking, the overwhelming majority of your deaths are caused by you making a mistake.

If you find yourself dying a lot, then you need to work on dying less. If you’re not sure how to die less, here are some fundamental things to consider.

Check out a separate guide we wrote this year on how to reduce your death risk in LoL!

Warding in League of Legends is incredibly important. I can’t really put into words how important it is to buy Control Wards. Control Wards offer you so many things that can protect your life and let you get kills.

For instance, placing a Control Ward in your lane will allow you to deny enemy vision, spot the enemy Jungler before they gank you, let your Jungler gank you, and much more.

Similarly, they can also save your life and your allies as they can spot enemy roams, the enemy Jungler and provide you with information that can keep you alive.

There isn’t a special number of wards you should aim to get each game, but you should buy an early Control Ward, place it somewhere it will last, then buy more Control Wards as the game develops.

6. You Sucked at Farming

Farming in League of Legends is the most effective way of earning a lot of gold and XP. If you have terrible farming, then you’re missing out on gold that could help you get your next item and can help you snowball.

Even if you think you’re good at farming and picking up CS, there are always things you can do to improve how effective you are at farming- for instance, going into a custom game or practice tool and focusing on just farming.

Mastering farming under towers will also help. In the very early game, you need to let the tower auto-attack the front minions twice before finishing them off with an auto. You need to auto once for the back minions, let the tower hit it, and then auto again to secure the gold.

Another problem a lot of players struggle with is farming during the mid and late game. One reason for this is that players like to “ARAM” and stay mid and let the minions in the side lanes die. Try and keep an eye on minion waves and rotate when necessary.

Not sure how you fare up against others in the same rank as you? Head over to your GPI and check out your farming score. There’s plenty of tips there to help you improve too.

That about sums up our guide on why we think you didn’t hit your end of season goals for 2021. Work on these things for next year and you will see yourself climbing and hitting those season goals early on.