Why NA Sucks at Worlds and International Events

Why Is NA So Bad at Worlds?

We’re over halfway through Worlds 2022, and NA is doing as we all expected. Do you think they will win Worlds? Probably not, but watching them play against some of the top teams from EU, KR, and the rest of the world has been pretty exciting.

Unfortunately for North America, they tend not to turn up for international events such as Worlds and never really do well when it comes to getting out of groups. Historically, NA hasn’t performed very well on the Worlds stage for a long time.

In this Mobalytics article, we’re going to give some insight and compare NA to the rest of the world and break down a few things that will help us build a picture of why NA doesn’t do too well on the big stage.

Before we begin, it is important to note that we will not be biased towards any server and will be as neutral as possible. If you like this article, head to the Mobalytics site for more Esports and educational articles.

Every server has a different play style and favours different types of champions. The NA play style is slightly different to the rest of the world, which could be one reason why they do not do too well.

It is known that NA doesn’t really adapt to well to meta sifts and meta changes. Some regions adapt really quickly or are ahead of the curve, while it takes NA teams slightly longer to adapt. This is not always a bad thing, but on an international stage, having any advantage is key.

Something else that could be mentioned is their lack of knowledge/skill in the drafting phase. Often you will see teams draft extremely poorly, or not play to the team comps strengths which ultimately costs them games.

Now we could go all over the place with this one, but I want to keep it to the point. NA doesn’t play as much ranked compared to other servers. This is mostly down to pros not wanting to play as often, but it is not always their fault.

If you watch any big pro streamer, you can see how much they don’t want to play ranked due to how bad the ranked experience is. There are a few reasons why it is worse in NA compared to some other regions:

Long queue times and multiple remakes a day coupled together make for a less-than-stellar experience. There are many reasons for a game to be remade, but unfortunately, it feels like most remakes are due to deliberate AFKS.

As of late, many people are deliberately throwing games and running it down in high ELO. This is heavily influenced by betting and max fixing.

There are a lot of players who are in high ELO that will run it down and int certain players when they have them on their team.

While NA isn’t the only server that has these issues, they all contribute to why NA doesn’t play as much. I don’t blame them for not wanting to play when these things affect their Solo Queue experience, but they need to release that they need to play if they want to improve.

For my next point, I need to be pretty vague to not call out any pros or make it obvious who we’re talking about, but in 2022, there were some pretty good game releases. Instead of doing their job and grinding League, some pros were playing other games instead. I’m not saying they can’t play other games, but if it’s getting in the way of doing your job, then it’s an issue.

When a new game was released, we saw many pros clock in ridiculous hours within the first week of release. This mindset is different from NA to KR, for example.

Here’s a video by Markz which breaks down more information on why NA sucks!

This somewhat ties into our last point. However, when we compare NA to the rest of the world, they tend to, on average, play less ranked games and spend less time on Summoners Rift. Korea is an amazing example of hard work and dedication. You will see pros on this server grinding day and night to improve while NA is nowhere to be seen.

If we look at some high ELO players like Tyler 1 on NA, he grinds League day and night, but where are the pros? What are they doing? They’re not playing ranked nearly as much as him or pros on other servers. With this poor work ethic and less time spent playing the game, it’s clear that they’re never going to win Worlds.

There are some outliers, but for the most part, NA just doesn’t practice enough and their poor work ethic is one of the main contributing factors when it comes to this.

Take a look at Fakers 24 hour schedule. It’s slightly outdated, but just look at how much time he plays or does things surrounding the game.

The North American pro scene is full of old players who have been playing for years. This is a good thing because the old blood can teach the newbies a thing or two. Their experience is valuable when it comes to building characters and faces of the LCS.

But, theres a slight issue with so many players being in the League for a long time: they become washed up. It’s a very common meme that NA is a retirement home for pros, and it is somewhat true. Imports from other countries who have been playing for some time will get brought by NA teams to fill their roster. When they come to NA, they don’t perform as they had been before, and they soon get dumped or stay in the league doing the bare minimum to survive.

In recent times, players who have retired have made their way back into the scene. This isn’t exactly healthy for the strength of North America because they don’t always perform too well when they’re back. However, franchisees in the NA pro scene don’t care about this because it’s good to have big names in their organisation.

North America is huge in size, but the server population isn’t. There is a large difference in numbers between NA, EU and KR with NA having similar members playing ranked compared to much smaller servers around the world (such as EUNE). 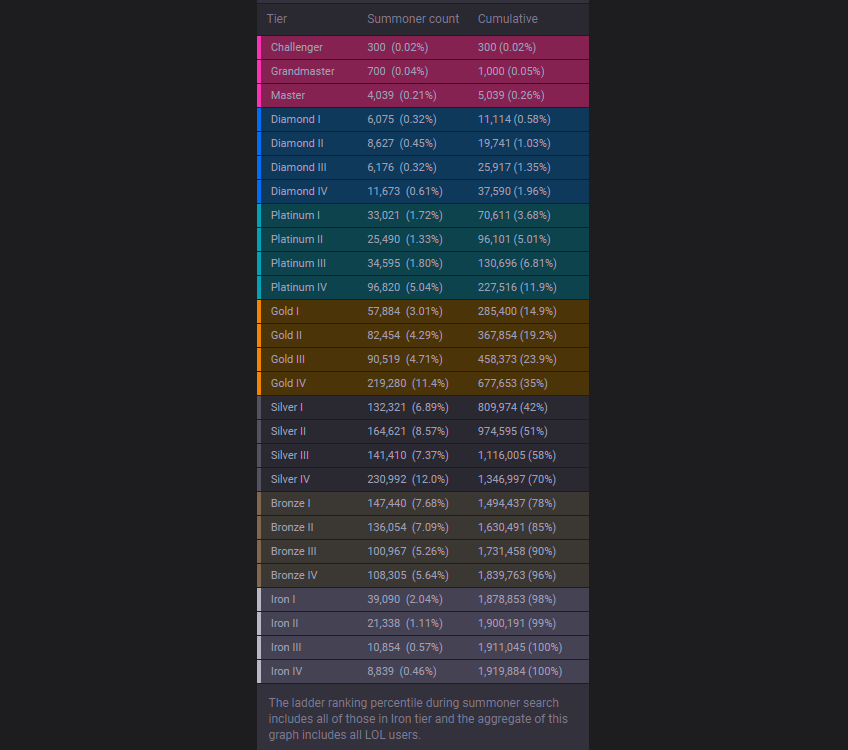 These stats were taken from the OP.GG site. Huge props to them for having this data. You can check the data and compare their server to others worldwide.

With so few players playing ranked, it can be hard to create talent because there are less people playing the game. There can be a few different reasons why less people play in NA.

People just don’t like League. NA may not favour MOBA games and prefer games such as Shooters or RPG games instead. MOBA’s are one of the dominant games in KR for instance.

Nobody likes lagging, and if you’re in NA, you will have a high ping. This is one of the pitfalls of being in NA; unless you live near the servers, you’re in for a rough time.

There are some deep-rooted errors in NA that are costing them the Worlds title. Until NA, LCS, and the player base works on these issues; there isn’t much hope for them ever winning the biggest title of the year.