After what seems like an eternity, Riot has will be reworking Tahm Kench on Patch 11.13. Tahm Kench is an interesting catfish.

He mainly was played a Support but never saw much action because of his lacklustre playstyle.

While he wasn’t quite fit for solo queue, Tahm Kench was very good in pro play, thanks to his W and his Ultimate.

However, because of his strength in pro play, he was constantly nerfed, which made him even worse for solo queue.

In this guide, we will go over essential tips to play the reworked Tahm Kench in the Top lane. This guide will not be aimed at the Support role because his kit has changed quite a lot, and I think he’s more of a Top laner now.

He does have tools to protect his allies, but his playstyle will now be more bruiser orientated. His W and R can be used on his allies, but he doesn’t give anyone a “get out of jail free card” anymore. This makes him not as effective in the Support role.

To get more tips and tricks to improve your climb, sign up for your free Mobalytics account.

Tahm Kench’s abilities are slightly changed, but for the most part, he is incredibly similar to his previous self.

Attacks deal bonus damage and apply a stack of his Passive. At 3 stacks, using your Q or R on an enemy champion will empower the ability. 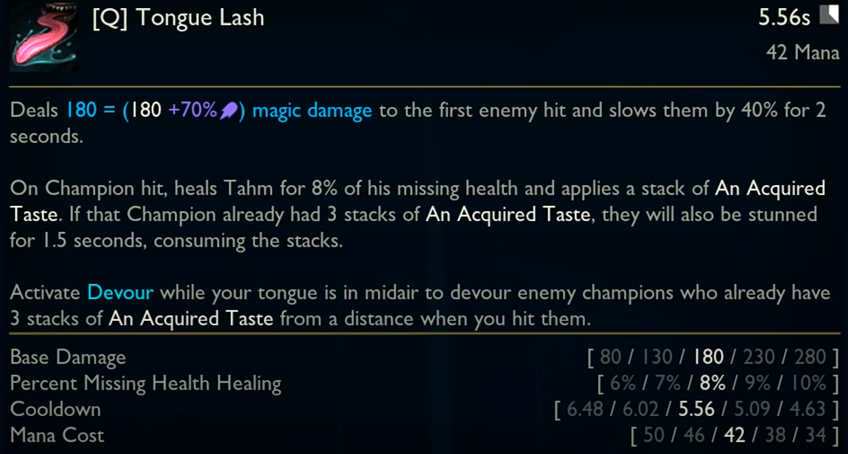 This ability deals damage and slows the first target it hits. If it hits a champion, it heals him for some health and applies a stack. If he has 3 stacks on the target, he will stun them briefly.

Dive into the deep and re-appear at a target location, dealing damage and knocking enemies in that area up briefly. If you hit at least 1 champion, you will get a cooldown and mana refund. Devoured allies can go with you on your trip but can get out early.

Tahm Kench stores incoming damage and restores some missing health after some time. If Tahm activates his E mid-fight, or while he has grey health, he will convert the grey health into a shield. 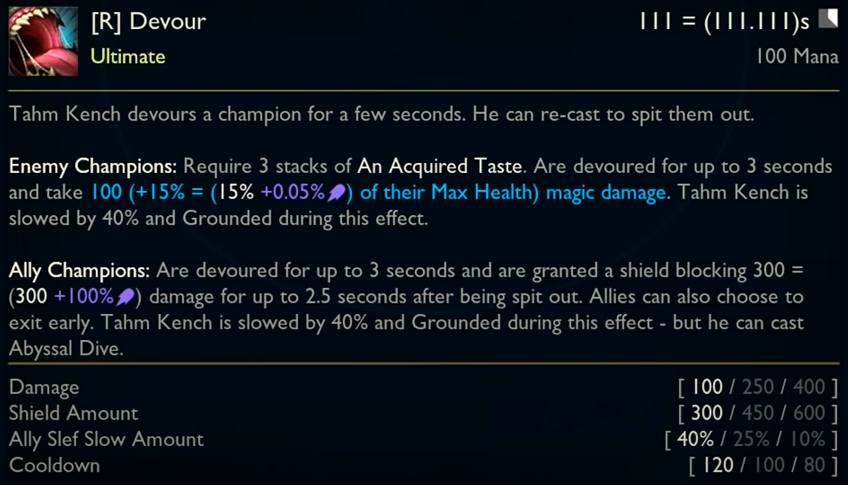 Tahm Kench devours a champion for a few seconds. If he recasts this ability, he can spit them out. For an enemy champion to be devoured, he needs to apply 3 stacks of his Passive on them. If he Devours an ally, he grants them a shield.

As you can see, he is very similar to the previous Tahm Kench. You can find more information regarding Tahm Kench’s abilities by checking out Tahm Kench’s champion page.

We’ve done some testing on the PBE to find which Runes are good on Tahm Kench, and here is the setup we have made. Unfortunately, the best build and Rune page may not have been found for Tahm Kench yet because not everyone has access to the PBE and has time to test new builds for Tahm.

His new build is going to be similar or the same as his pre-rework phase.

Here are some fundamental beginners tips for playing Tahm Kench in the Top lane. We will add more tips in the future! However, if you want more tips and tricks for Tahm Kench, why not check out Tahm Kench’s champion page? It has lots of extra tips and tricks!

Final Thoughts on the Rework

I think this is a good move for Tahm Kench. I never liked him as a Support, and I very much disagreed with how impactful he was in pro play and how that impact made its way to solo queue. I disagreed with Riot heavily nerfing him because of pro-play. He was never great in solo queue, but they made him a lot worse and basically unplayable for solo play.

I think his W and R changes are great, but I think his Ultimate is on an incredibly long cooldown. I expect it will be reduced in the future.

Tahm Kench’s rework hits the live servers on Patch 11.13. What do you think of his rework? Will you miss Support Tahm Kench and the old Tahm Kench in general?