How to Play Reworked Dr. Mundo

How to Play Reworked Dr. Mundo

After a long time, Riot has finally reworked Dr Mundo on Patch 11.12. They’ve been talking about changing Dr Mundo for a very long time and as an avid fan of Dr Mundo, it’s sad to see him get changed, especially after his recent success in Season 11 being a top tier Jungler for an extended period of time.

In this Mobalytics guide, we will discuss some things to help you get started to learn the new and “improved” Dr Mundo.

We will break down his new abilities, Runes and build, jungle path, and much more. Please note this is not going to be an in-depth guide. It is a basic guide to give you some tips to play him once he launches on the live servers.

Dr. Mundo’s abilities have changed slightly. Some of them are still the same, but with different animations.

Overall, his kit is very similar, but there are some notable changes. Let’s break down each of Dr. Mundo’s new abilities and his new Passive.

Dr. Mundo’s Passive is Goes Where He Pleases

Periodically, Mundo gains immunity to an immobilizing effect. Upon resisting one, he loses 7% of his current health and drops a canister. If he picks up this canister, he heals himself for 8% of his maximum health and reduces his Passive’s cooldown. If an enemy walks over it- it is destroyed.

He also regenerates 2% of his maximum health every 5 seconds.

Dr. Mundo throws his Bonesaw in a target direction, dealing damage and slowing the target. If the target is a champion, he heals himself for 100% of the cost. If it hits something that isn’t a champion like a minion or monster, it refunds 50% of the cost.

Mundo deals damage to nearby enemies while charging a defibrillator. When he reactivates this ability, he detonates the defibrillator and heals himself for 100% of the damage stored if he hits an enemy with it. If he doesn’t hit an enemy, he heals for 50%. 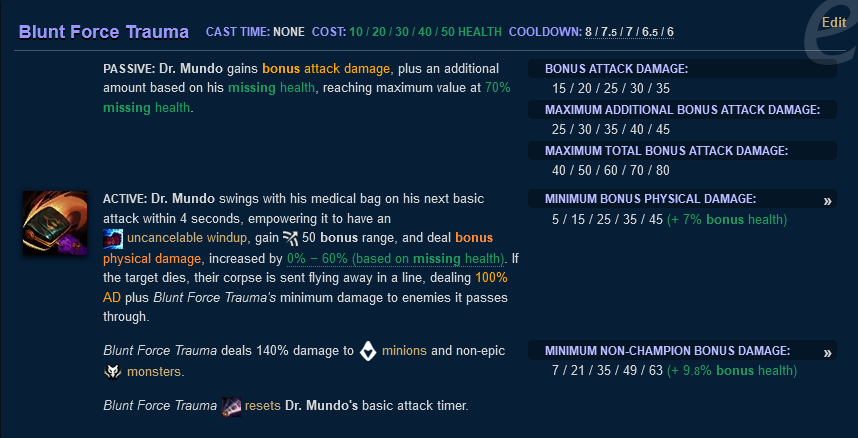 Passive: Mundo gains bonus AD, plus additional AD depending on his missing health.

When he activates this ability, he empowers his next ability, gaining range and dealing additional damage. If he kills the target, the corpse is flung in a line, dealing damage to all enemies it passes through. This ability remains an auto-attack reset.

Mundo heals himself for a percentage of his missing health while gaining additional damage and movement speed.

As you can see, all his abilities are somewhat similar to traditional Dr. Mundo. However, there are added things to his kit to make him less- basic.

You can find more information regarding Dr. Mundo’s abilities by checking our Dr. Mundo’s champion page.

We’ve done some testing on the PBE to find which Runes are good for Dr. Mundo, and this is the setup we have come up with. The best build and Rune page may not have been found yet because not everybody has access to the PBE to test new builds for him.

This is a test build for Dr. Mundo. Like we talked about previously, there is no “best setup” for him yet. However, his new build is going to be similar or the same as his pre-rework phase. Check back frequently to see if this build has changed for Dr. Mundo.

This will be the recommended jungle route for Dr. Mundo. As you can see, it’s the standard route that most Junglers are currently taking. I recommend sticking to this route to begin with and then slowly moving on to alternative routes once you become more confident with Dr. Mundo.

Please note that this is not the only route that Dr. Mundo can take. This is just one of the good routes that he can potentially take.

“Anyone Seen Mundo’s Brain Scissors?” No? Maybe you could find them over at Dr. Mundo’s guide page, along with additional jungle routes. 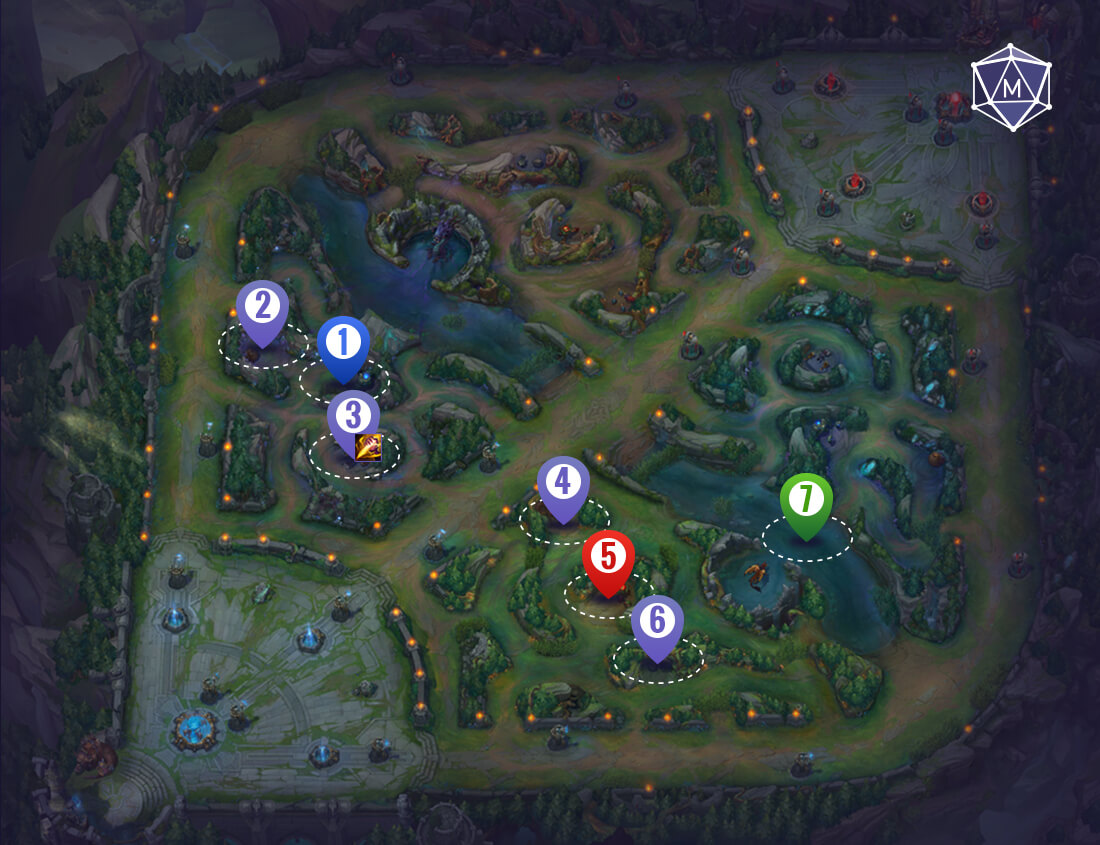 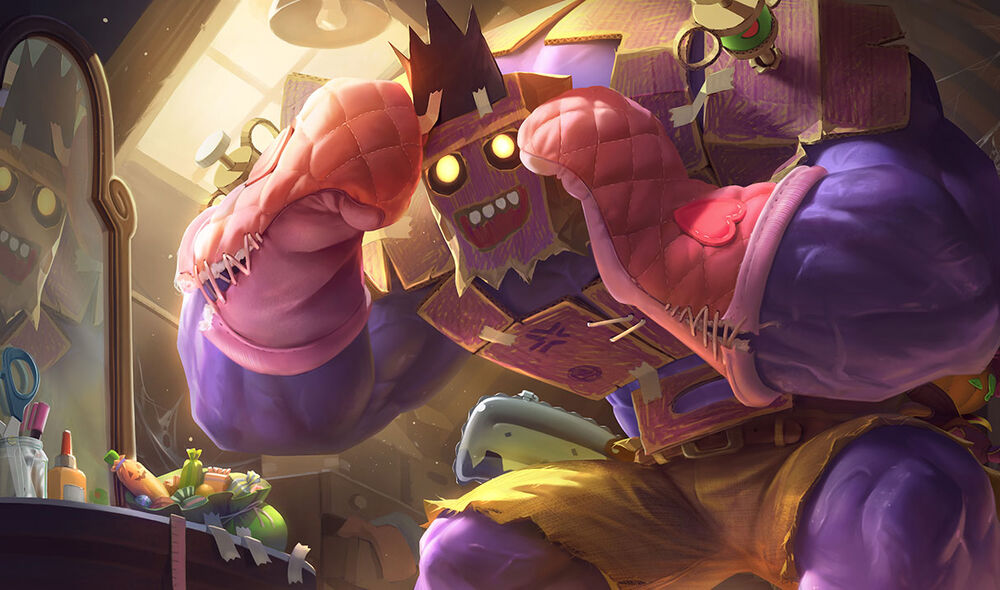 Final Thoughts on the Rework

I think Dr. Mundo has now been brought up to scratch with a lot of the other champions on Summoner Rift. His kit feels way more modern and reminds me heavily of other skirmish heavy champions like Zac, Sion, and Tahm Kench. I think that Riot made an excellent job of his rework. Will he be better after the rework? Probably. The changes will benefit him more in the Jungle role than Top though.

While I think the rework is good, I don’t think the model is great: he doesn’t feel like a monster at all. Regarding his base skin, I think it’s terrible- so you’ll need to play him with a skin for sure. The skins look good, as so do the splash art.

Like I’ve talked about previously, it’s sad to see Mundo getting changes, but I think it’s somewhat justified. I wish that they didn’t change him because I loved the old Dr Mundo and he was doing good in the Jungle in season 11.

Dr. Mundo hits live servers on Patch 11.12. What do you think of the reworked Mundo? Is he better now, or do you pref the clunky doctor that we have been used to seeing?