How to Play Renata (Abilities, Builds, and Tips)

Renata Glasc is a Support and the second champion to hit Summoners Rift in Season 12. She is the 159th champion, and is coming out very very soon!

She has interesting tools in her kit that can play a huge part in dictating the tempo of the lane and the game. For instance, Renata can be good at getting picks, while also being able to empower her allies.

Let’s break down a basic guide to playing the Renata Glasc, the newest champion to bless Summoners Rift.

In this Mobalytics guide, we will discuss some basic tips on playing Renata Glasc in League of Legends. Before we begin, this is intended to give you a fundamental overview of her and is not meant to be an in-depth guide. Sign up to Mobalytics for more tips to improve your climb!

If you want to know more tips on playing as Renata Glasc, learn up-to-date builds and see who she counters or gets countered by, check out Renata Glasc’s champion page.

Her basic attacks mark the enemy. If allies damage them, they consume the mark and deal extra damage. She can only mark one champion at a time.

Pretty basic Passive, just what we like to see on a champion!

She fires a hook that roots the first enemy it hits. While they are rooted, she has her movement speed reduced as she cannot auto-attack the enemy. Upon recast, she knocks the target in a target direction dealing damage to enemies and stunning them briefly.

This Q reminds me of an octopus: how you can throw people or stuff around. It will be pretty versatile and can be used to set up plays, set up ganks or be used as a disengage tool to protect your allies.

Renata empowers her ally, granting them tons of additional stats. If they were to die while empowered, they would return briefly to full health before rapidly decaying and dying. If they get a takedown while decaying, they will be set to 35% healthy and stop decaying.

She sends out a chemtech rocket that deals damage to enemies it hits. When used, she gains a shield, and so does any allies who come into contact with it on its path.

It’s another cool spell, and it kind of reminds me of Vel’Koz Q the way it travels. It’s a pretty good disengage or pick tool.

Renata launches a tidal path that causes all enemies to become berserk. While affected with berserk, they gain bonus attack speed and start auto-attacking their nearest unit, regardless of if it’s an ally or enemy champion. It is noted that they can attack champs, minions, monsters and wards but cannot attack structures or plants in the jungle.

The Ultimate is pretty cool, to be honest. I think it could be a real game-changer as the range is massive. Just imagine getting a five-person ult of when the enemy is around a major objective or in their jungle…

Here is an example builds for Renata we’ve been trailing on the PBE. 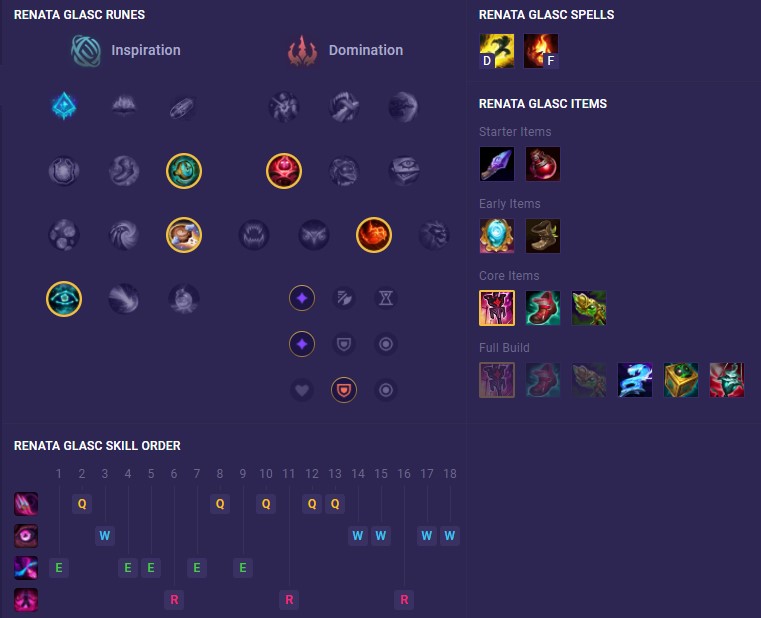 Realistically speaking, the best build and rune page may not have been found yet, as not everyone has access to the PBE to test her out. We will update this build frequently as she is released onto the live servers.

Stay up to date with Renata’s latest champion rune/item builds and import them directly into your client hassle-free with the Mobalytics App.

During the laning phase, she is really good at getting picks and starting skirmishes thanks to her Q. When you land your Q on the enemy, you can look for all-in opportunities and potential fights and skirmishes. Especially if you use it towards the other champion in the lane.

When you’re in the mid-lane dancing with the enemy, your Q can also be pretty useful as it can allow you to pick the enemy off and then potentially siege the mid-lane tower, or rotate to another objective like the Dragon or Rift Herald.

In team fights, you’ll want to peel for your allies and empower your hyper carry or the strongest champion on your team. It’s best to do this as they can make good use of the additional stats your W offers them.

Fighting around objectives or in close quarters is going to be good for the newest champion as her Ultimate has a very large area of effect. As teams will be quite close together around these objectives and in the jungle, she will be able to hit the whole enemy team.

Furthermore, as they will be close to one another, they will focus each other during the timer which will help your team win the fight.

Let’s discuss some very basic beginner tips to help you get started with the latest champ to hit Summoners Rift.

Don’t play the new champion in ranked when she’s out. You’ll not only ruin your own LP gains and MMR, but you’ll annoy your teammates as well. Ban her so your team can’t pick her, and so the enemy cannot pick her either. For more articles, head to Mobalytics!