How to Play Nilah (Abilities, Builds, and Tips)

How to Play Nilah

Bel’Veth has only been out for a few weeks, and Riot has already teased us with the next champion to be released. Nilah is the fourth champion to hit Summoners Rift, and she will be released on Patch 12.13. She will primarily be played in the ADC role.

She is a champion who has a lot of play making potential, but a very basic and simple kit. Nilah relies heavily on auto-attacks and her Ultimate while using her E to create distance or close the gap between her and enemy champions.  If you’re not into champions with basic kits, then she might not be for you.

Without wasting any more time, let’s break down Nilah’s abilities, basic tips and tricks, Nilah’s best build and her rune page. To find out more tips for her and other champions in League of Legends, head over to the Mobalytics site.

Here are the things we will cover in this article:

This Passive alone makes her an ADC. She probably won’t see play in other lanes because it limits her Passive. The extra healing and shielding will make her very good with utility and healing Supports. 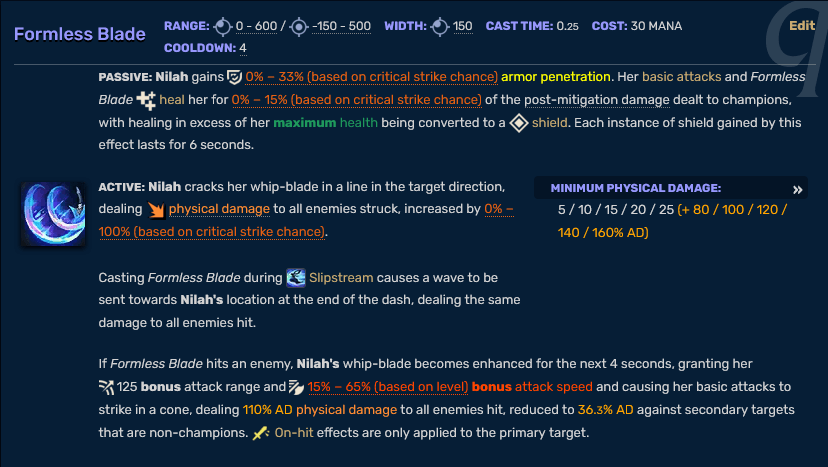 Her Q is pretty interesting and makes a cool noise. I think this is one of her best abilities, and it is going to be crucial for trading with the enemy laners.

This is the only real unique thing about her kit. She can stop taking damage from auto-attacks while also reducing incoming magic damage. It is pretty good on paper, and I can’t wait to see it in action. It does have a longish cooldown, so she needs to reserve using it.

Her E is going to be the primary way she engages or disengages. I think it’s a crucial ability for her kit and can provide her with a lot of distance. I advise looking for trades when you have two stacks so you can E forward and use the E again on a minion to escape.

Her Ultimate is great and reminds me of Diana’s Ultimate: in all honestly, it’s kind of a copy-paste, but it is what it is. Her Ultimate offers Nilah a lot of play-making potential, and it is good in close combat situations.

Here’s an example build for Nilah that we’ve been testing out on the PBE. 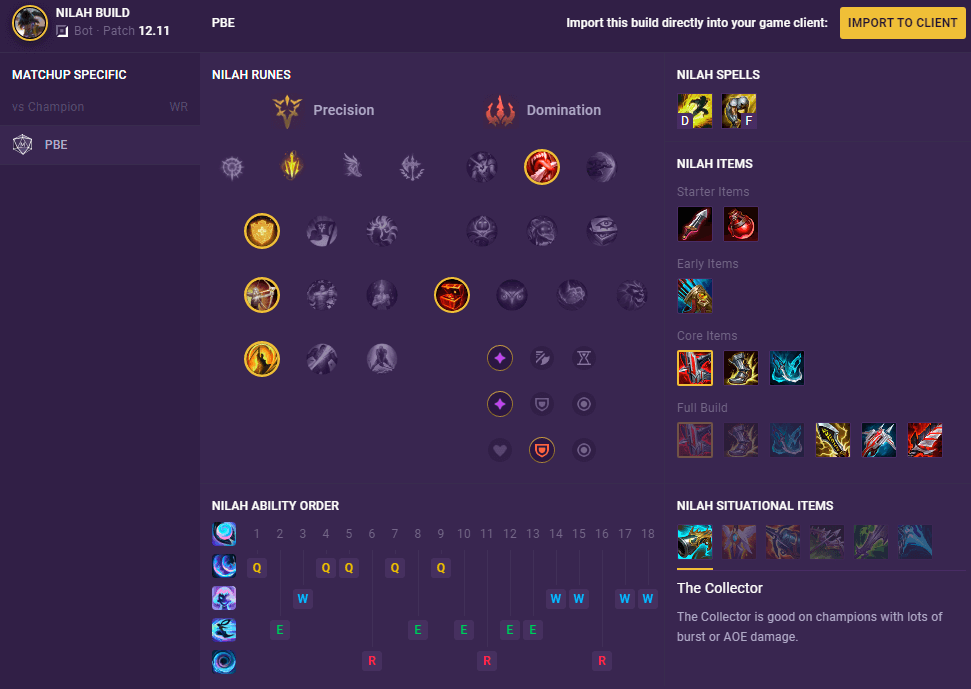 Keep in mind that the best build and rune page for Nilah may not have been found yet as not everyone has access to the PBE to test her out. Check back later as we may have changed the recommended build for her.

Stay up to date with Nilah’s latest champion runes/items and import them hassle-free into your client with the Mobalytics App.

Team fighting for Nilah is very similar to every other ADC in the game. When team fighting, you need to watch your positioning, so you do not get killed instantly in a team fight. Staying alive for as long as possible will increase your team’s chances of winning the team fight.

Team fighting in the jungle can be good for Nilah because of her Ultimate. As her Ultimate has a large area of effect, you can target multiple champions at once, as enemies will generally be grouped closely together in the jungle. This is true for fighting in and around objectives like the Dragon or Baron pit.

If the enemy frontline can get on to you, try to use your E in a manner where you can create a gap between you and them without putting yourself into other enemy champions. For instance, you may want to walk forward and then E onto the enemy champion when they’re behind you to escape.

Nothing really stands out to me about Nilah and her kit. The only interesting thing is her Passive and the fact that she can share XP. The rest of her abilities are things we’ve seen before, and I think Riot kinda dropped the ball on this one.

Yeah, her Passive is cool and all, but theres nothing special about her kit. However, her playstyle could offer a lot of snowball potential with the XP lead, but we will truly see how strong this XP trade-off is if it is strong at all.

It will be highly likely that she will be played in the ADC role due to her kit and her Passive.

Nilah is going to be released on patch 12.13. She is the fourth champion to hit Summoners Rift in 2022 and will be the 161st to bless our screens. What do you think about Nilah? Is she a letdown, or do you think she will be super OP?

Stay up to date with her build, and find more tips to play as and against her with the Mobalytics App!