How to Play Bel’Veth (Abilities, Builds, and Tips)

Bel’Veth is a void champion that is hitting Summoners Rift on Patch 12.11. They will be played mainly in the jungle or mid lane, and this guide will try to cover tips for both of the roles we expect them to be played.

Bel’Veth is a fighter from the void. She relies heavily on auto-attacking the enemy and weaving in auto-attacks inbetween each ability use. If you like skirmish heavy, all-in champions, then Bel’Veth could be for you!

Without further ado, let’s break down Bel’Veth’s abilities, basic tips and tricks, Bel’Veth build and rune page, and much more. For tips and tricks for other champions in League of Legends, head over to the Mobalytics site.

Bel’Veth’s Passive is Death in Lavender

After using an ability, she gains two stacks for 5 seconds which can stack up to 6 times. While she has stacks, she gains extra attack speed, and she is ghosted. Basic attacks consume one stack.

With takedowns on champions/monsters, she gains permanent stacks. Each permanent stack grants her additional attack speed. Her attack speed cap is 10, but her attacks deal 25% reduced damage while applying a reduced amount of effectiveness with on-hits.

Pretty basic Passive. Depending on how much speed she gets, she could be a pain to chase down.

She dashes dealing damage to champs she passes through. She can only cast this ability in specific ways, and it is an auto-attack reset.

She cannot use this ability to get over walls, which is nice, but I think it’s another pretty basic movement ability.

Bel’Veth’s W is Above and Below

Deals damage to enemies struck while briefly knocking them up and slowing them. If she hits a champion with this ability, the dash cooldown on her Q is reduced.

Pretty standard reset ability. Excellent for her Q, but because the reduction is somewhat temperamental, I’m not sure how effective it will be, but time will tell. 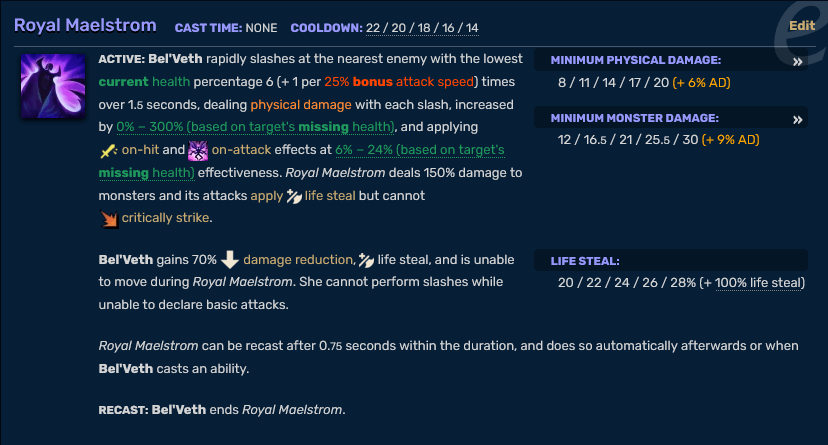 She damages the lowest health enemy while taking less damage from enemies. The more missing health the enemy has, the more damage she does. The amount of slashes she throws out depends on her attack speed.

While her E is active, she is unable to move. But because of the damage reduction, she should have some survivability.

I think her E is cool. It’s the best ability so far. It reminds me of Samira and Swain’s Ultimates. 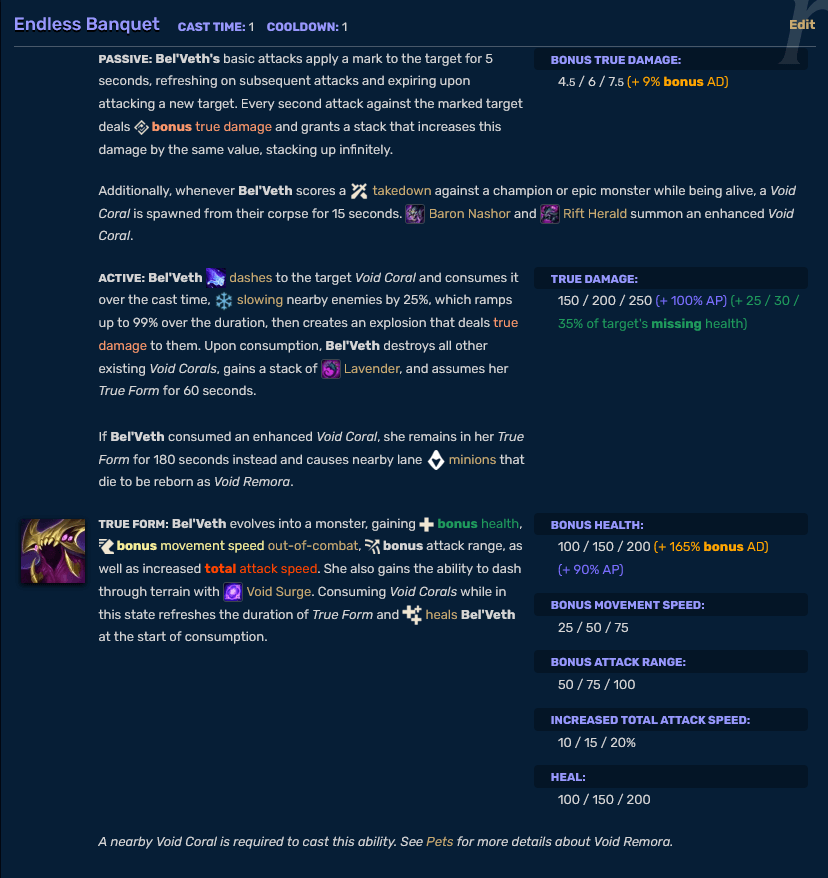 Every auto-attack applies a stack on a target. Dealing secondary damage to the target will deal extra damage. When she gets a takedown, she spawns a corpse for 15 seconds. Monsters like Baron and Rift Herald summon enhanced Void Coral.

She dashes to the target and consumes it when she activates this ability. She slows the enemy and deals damage to them. Upon consumption, she becomes her true form for 60 seconds. If she consumes the Baron or Rift Herald, she will be her true form for 180 seconds. While in the 180second form, lane minions nearby become reborn and push the lane.

While in true form, she gains bonus health and movement speed, extra attack range and attack speed. She can then use her Q to go through terrain too.

Her Ultimate is the most exciting part of her kit. It offers her extra playmaking potential and is an interesting concept. I think her Ultimate saves her kit, honestly. None of the other abilities were anything that made me go, “wow!”

Here is an example build for Bel’Veth we’ve been trailing on the PBE. 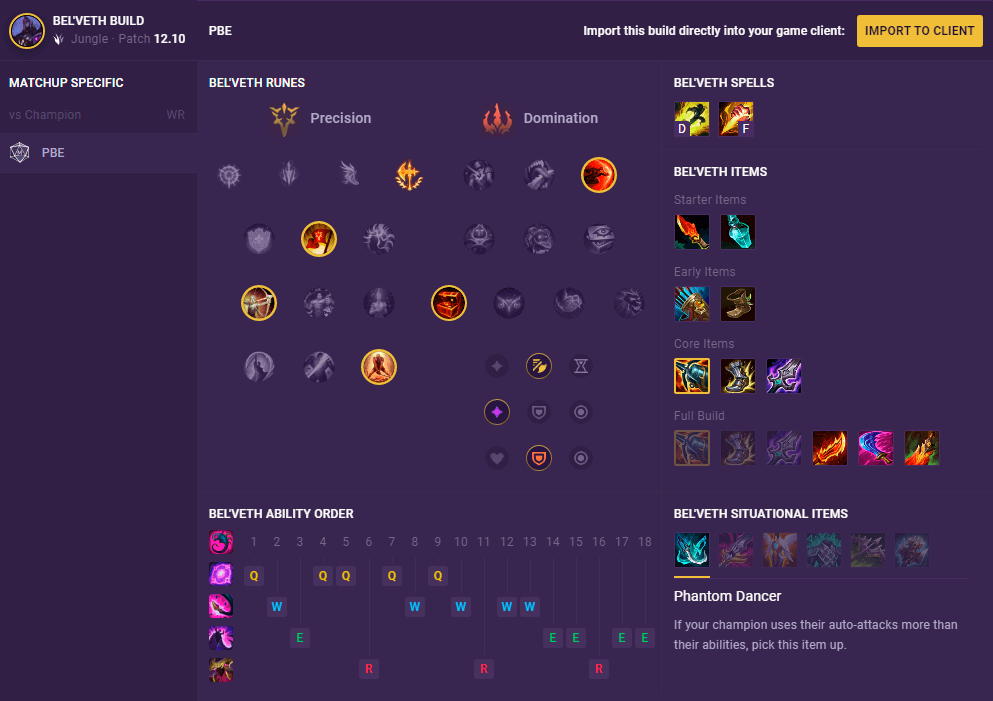 Realistically speaking, the best build and rune page may not have been found yet, as not everyone has access to the PBE to test her out. We will update this build frequently as she is released onto the live servers.

Stay up to date with Bel’Veth’s latest champion rune/item builds and import them hassle-free into your client with the Mobalytics App.

Here are some tips and tricks to get you started with Bel’Veth. We will keep adding more and more between now and her official launch on the live servers.

Team fighting on Bel’Veth is pretty much like any AD fighter. You want to go in and focus on a key target first. Most commonly, you’ll try to take down a squishy carry like the enemy Mid laner or ADC. However, taking out the Support would also be beneficial.

You must auto-attack as much as possible in team fights to fully use your Passive. You can just auto the nearest champion if you have to. Don’t be afraid to use your E if things are getting heated. The extra protection it offers will help you stay alive for longer.

Make sure you get your Ultimate off whenever possible. It can help keep you alive as it increases your health.

It’s nice to see a champion with a somewhat basic kit come back to League of Legends. It feels like we’ve recently had OP machines dominate and run around Summoners Rift. Apart from her Ultimate, her kit seems very basic.

Like I said earlier, I felt that her Ultimate honestly saved her kit and made her a little bit more interesting. Don’t get me wrong, we love basic abilities, but theres a reason some champions don’t get played anymore. Her Ultimate honestly livens up her kit a bit more.

I think she will be more dominant in the Jungle, but she is definitely a flex pick that can be played in the Mid lane. I expect with some potential buffs/nerfs, and she will probably end up in the top lane too.

Bel’Veth is hitting Summoners Rift on patch 12.11. She will be the third champion released in 2022, and the 160th champion to hit Summoners Rift. What do you think of her kit? Is she going to be OP? Time will tell, but let us know what you think.

Stay up to date with her build, and find more tips to play as and against her with the Mobalytics App!