How to Lane Without Priority in League of Legends (6 Tips)

6 Tips to Help You Lane Without Prio

A classic example of this is when you have no lane priority – basically meaning that you don’t have the ability to consistently push your wave to put pressure on your enemy and their turret.

These games can feel helpless and frustrating but there are ways to make the most of a bad situation to increase your team’s odds of winning in other places around the map!

In this guide, we’ll cover the different ways to improve your laning in these unfavorable situations.

6 Tips to Help You Lane With No Priority in LoL

You can increase your survivability and reduce your chances of dying by adjusting your rune choice, particularly the minor runes and opting for more defensive armor or magic resistance stats rather than adaptive damage. If you’re laning versus an AP heavy champion, or if you’re playing versus double poke champions in the bottom lane, then you may wish to go for those runes.

Furthermore, you can also adjust your secondary tree line and potentially opt for runes that offer more protection, such as the resolve tree. When combined, changing these two things will increase your survivability and slow the burn of a matchup where you will have no priority.

Naturally, not every champion can do this. For instance, fighters such as Fiora may not be able to do this, or champions like Teemo will benefit more from the adaptive damage.

2. Invest in a Refillable Potion

Some matchups will be extremely difficult to survive in, and it can be hard to keep your health above 70%. This is especially true against double poke lanes, such as a Caitlyn Zyra lane or a Syndra Xerath bot. Surviving in these matchups is pretty tricky, but you can make it a little easier by purchasing a Refillable Potion.

Instead of spending tons of gold on Health Potions after every back, buy a Refillable Potion or a Courrpting Potion (preferably a Refillable). This is a very cost-effective item and will save you a lot of gold in the long run, and it will help you stay healthy in the lane even into the pokiest of matchups.

Buy this as soon as you have to. Avoid wasting 500 gold on 10 health potions- don’t lie, we’ve all done it.

Something to keep in mind is Boots. Boots are good in League of Legends as they’re a cheap item that offers movement speed. Every champion bar 1 will buy them. When you’re laning with no priority, having early Boots can be very beneficial in various ways.

Firstly, if you’re against a strong all-in AD champion like Fiora or Riven, getting Plated Steelcaps will not only help you escape their all-in, but they will also help keep you alive thanks to the items passive and the additional armor.

Secondly, Boots offer movement speed which is good against champions with lots of poke. In theory, having extra movement speed increases your chances of dodging skill shots, thus increasing your survivability.

Finally, Boots also allows you to reposition and escape bad situations quickly. In particular, if you’re getting ganked frequently or being zoned away from the farm, the extra Boots will help you get away.

It might not sound so helpful on paper but try it. Buy an early pair of Yeezyzs and see yourself having a slightly easier time in these hard matchups.

4. Ping When the Enemy Goes Missing

Having priority in the lane is usually due to the wave state, although other factors influence priority in the lane. When you’re being pushed in, the enemy can move to help their allies quicker than you can as they will generally have the head start over you.

For instance, if your Jungler invades the enemy’s jungle, the enemy can rotate and help their Jungler before you can as they’re closer. You will have to clear the minion wave first which adds a delay to the time it takes to get there.

If you’re not in a position to follow a rotating enemy, you need to firstly ping as much as humanly possible, so your team knows that the enemy is missing. You then need to assess the situation… Can you rotate and help your allies? Or will moving cost you more in the long run?

You may wish to avoid roaming if you miss out on lots of gold and CS (especially if you’re behind). It might not be worth rotating either if you’re going to be late to the party as the fight will be over before you get there.

When you’re being pushed into your tower, you should place defensive wards rather than go for aggressive or deep wards. Especially when it comes to placing Control Wards, try to place Control Wards away from your lane if you can as you will not be able to defend them from your enemy laner.

When you invest in a Control Ward, you’re spending 75 gold which is a lot of money for most roles. Because of this big investment, it is essential that the ward lasts for a long time to ensure value from it.

If you really want to emphasize Control Wards in your play, remember that you consider purchasing a Wardstone!

Regardless, when you have no priority in the lane, the enemy may be looking to dive you with their Jungler. You can reduce your chances of dying to ganks by placing defensive wards near your lane so you can spot the Jungler before they show up and gank you.

As a bonus, the wards will help your team spot the enemy laner as they leave and move from lane to lane. Then if they walk over wards, you can ensure that they are leaving the lane and not baiting you into pushing the wave.

If you want to find warding locations, check out our in-depth warding guide that breaks down tons of different warding situations to help you improve at LoL.

When you have no priority in the lane, you can’t exactly fight or do anything aggressive as the enemy can quickly turn it around and exploit you.

It might be worth sacrificing some CS when you have no pressure, so you don’t lose health and are forced to recall or experience the grey screen simulator. This is, in particular, a good thing to do when you’re squishy and low on health. 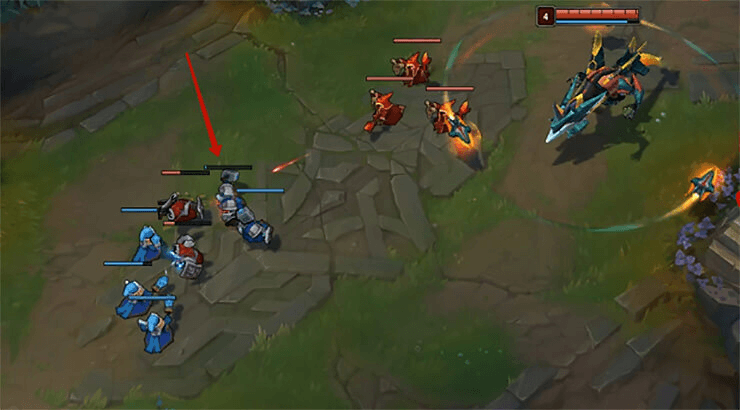 Instead of walking up trying to last hit minions and potentially getting all-in by the enemy, stand in the range of them, so you pick up the XP. If you have ranged abilities, you can use them to last hit the minions and brownie points if they’re AOE, and you can hit the enemy laner simultaneously.

Remember that when you go even in a lane that should’ve been an unfavorable loss for your team, that should count as a win in your book!

Although we all wish we could carry every game, sometimes you have to recognize how to position yourself for your team to carry you.

These tips may not work in every game and every situation, but we believe that they should help you in many of them in the long run.