4 Tips to Reduce your Teamfight Deaths in League of Legends

How to Reduce your Teamfight Deaths in League of Legends

Dying in League of Legends is something that everyone does. It’s not every day that somebody has a perfect game. One of the leading causes of this is poor team fighting or lack of coordination.

There are plenty of reasons why one may die in a team fight, and some champions die more often than others. For instance, champions like Brand (who has the most deaths of any Support) and Lulu are both very squishy. This means they are easier to kill in a team fight.

In this Mobalytics guide, we will break down some tips and tricks to help reduce your death risk in team fights.

What are the reasons you die in team fights?

There are loads of different reasons you may die in a team fight, but here are some of the main reasons we see players dying in every battle:

Played into the enemy team hands

A good team fighting champion is someone who generally has large AOE abilities, poke or someone who can empower their allies.

Amumu’s Ultimate is a great team fighting tool for multiple reasons. Firstly, it has a huge radius which allows him to use it on multiple champions at once. Secondly, it is a CC tool. These combined make it a powerful tool in team fights.

When playing against an Aumumu, avoid grouping too closely together so he cannot CC the whole team with his Ultimate.

“Come play with me”, and check out Amumu’s champion page to learn how to play as and against the little mummy.

When you’re against a Qiyana, do not, under any circumstances, fight inside the jungle.

Check out Qiyana’s champion page for tips on tricks on how to play as and against her.

Malphite is a good team fighting champion thanks to his Ultimate, which is a knock up tool that can hit multiple enemy champions at once. If he is ahead and building AP items, he may even be able to one-shot the enemy backline!

Against the rock, avoid sticking too close together so he cannot land a 5 person Ultimate. It is better for your team if he knocks one champion up rather than 5.

Learn the latest and greatest builds for Malphite with Malphite’s champion page.

How to reduce your team fight deaths

To better reduce your chances of dying in a team fight, it is important to understand the stats related to your performance.

With these stats, you can quickly see how frequently you die or survive in a team fight.

1. Ask yourself how the enemy wants to fight

In League of Legends, it’s essential to ask yourself how the enemy may want to fight. For instance, champions with a lot of AOE and CC will want the enemy team to group closer together. This will allow them to lock everyone down with CC, or deal damage to many enemies at once.

Here are some general pointers regarding a few champions and how you may wish to fight against them:

I would recommend that every time you load into a new game, you take a quick look at the enemies team composition and ask yourself, “what do they want to do in a fight?” It would be best if you then tried to play accordingly and avoid playing into their hands when it comes to team fighting.

If you’re unsure what a champion may want to do in a team fight, or if you don’t know what team composition the enemy may have, check out our in-depth team fighting and team composition guide. It breaks down every major team comp in the game and gives tons of different examples to help you learn how to team fight effectively.

2. Watch your positioning in team fights

I would assume that a good percentage of team fight deaths are because somebody mispositioned in the fight. If you misposition in one fight, not only do you die, but the enemy may be able to take the Dragon or Rift Herald afterwards. Fighting after one of these objectives have been secured can be extremely difficult.

Each champion has a different position where they should stand in a fight, and miss positioning will leave you vulnerable and easy to kill. For instance, a mispositioned Kog’Maw is an easy target for any would-be frontline champion.

Here’s a general guide for positioning for some roles and some champion classes. Please note that specific champions or team comps may require different positioning. If you want to learn more about positioning for the champion you’re playing, why don’t you check out the Mobalytics champion page for your champion to see where they should be positioned. 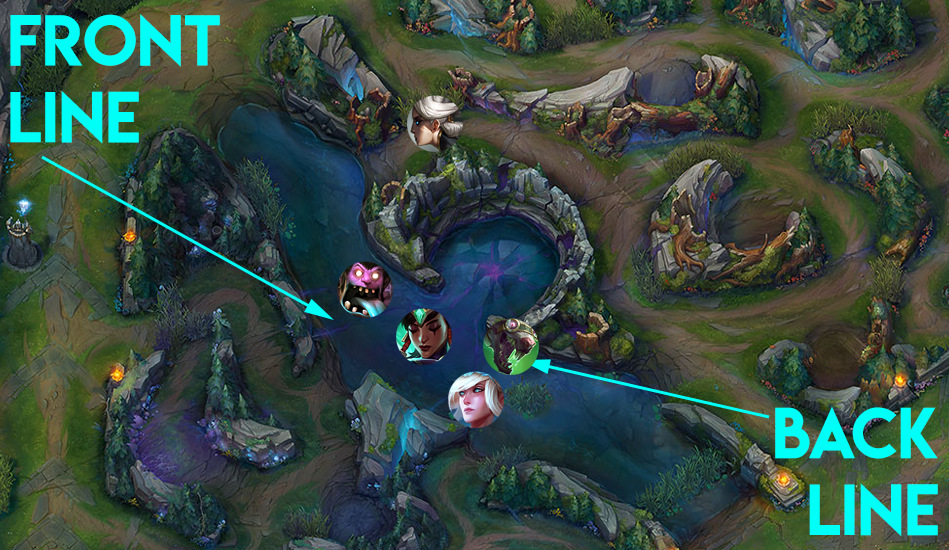 All of these images are taken from our Everything you need to know about team comps guide. 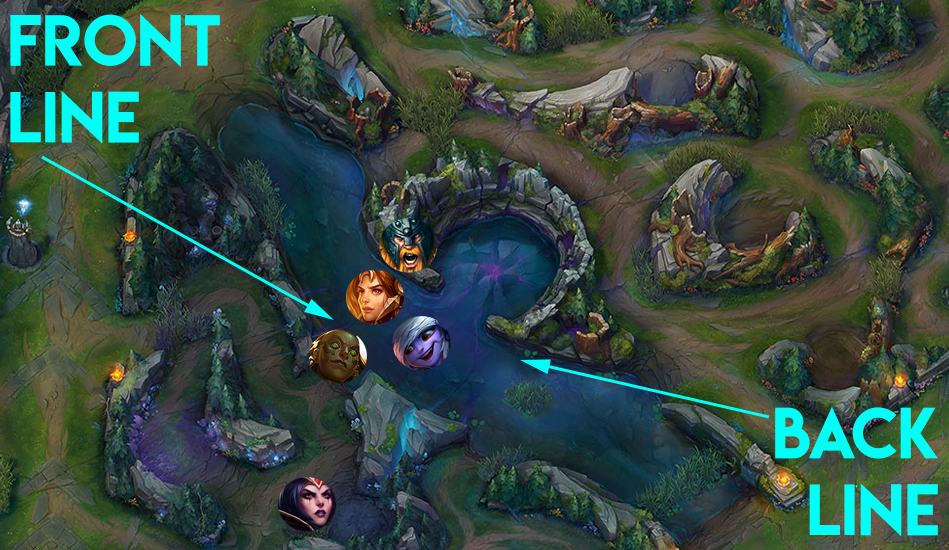 Utility Supports such as Janna 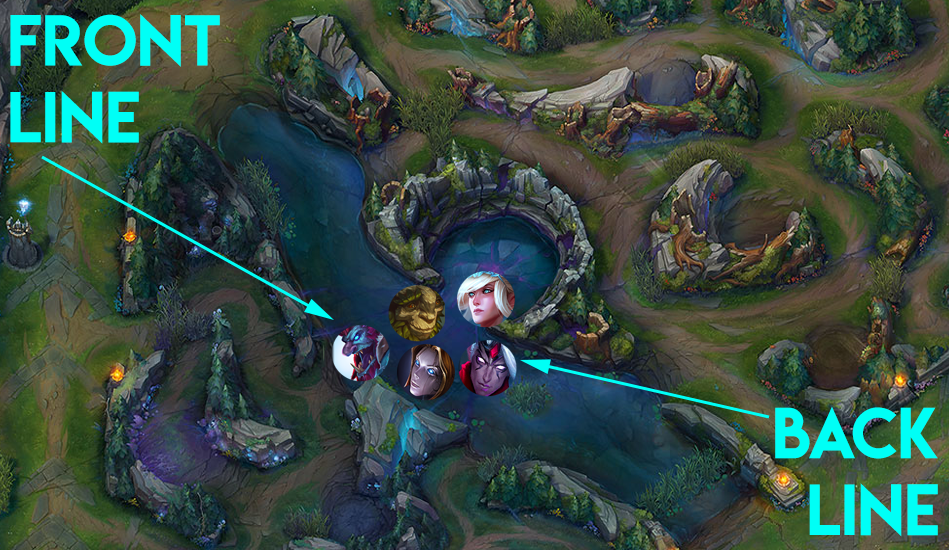 It is imperative that you are not too far away from your team at any given time and that you do not position too far forward when playing a carry champion. If you die at the start of the fight, you will most likely cost your team the team fight.

3. Play around your team’s Ultimates

I can’t tell you how many times my team has won a team fight, then decided to fight again straight afterwards while not having their Ultimates up. In many cases, it is better to hold off from team fighting unless your teams Ultimates are up: especially if they’re very impactful and needed to win a fight.

For instance, an Amumu will only want to commit to team fights if his Ultimate is up. Fighting without his Ultimate is him asking for trouble. It is the same for champions like Sona. Her Ultimate is a great team fighting tool- so why would you fight without it? 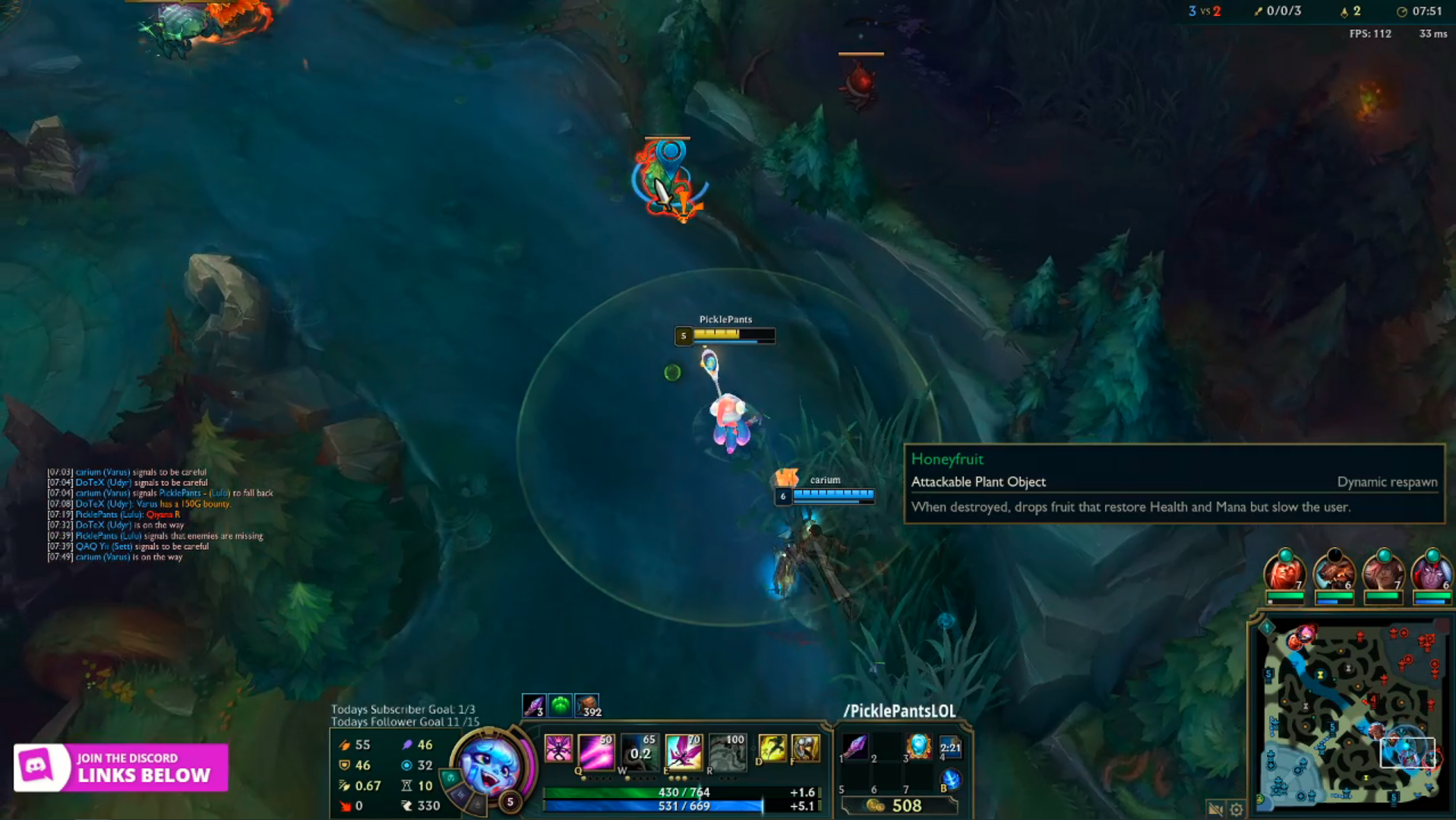 Look in the bottom left (or wherever your champion portraits are) and check who has their Ultimates up before initiating a skirmish or fight.

Before initiating a fight, look at your allies icons and check for the status of their Ultimates. Wait for the most impactful Ultimates to be up before committing for a fight. This includes looking for picks too.

On the other hand, it is also smart to play around the enemies Ultimates. For instance, looking to fight once the enemy Amumu has no Ultimate, so you know he cannot CC your whole team. Or fighting when Shen is split pushing without his Ultimate and forcing a 4v5 knowing he cannot save one of his teammates.

4. Play around item actives and Passives

Similarly to our previous point, playing around your champions active abilities such as Zhonya’s Hourglass or playing around item Passives like Guardian Angel or Banshee’s Veil will be very beneficial.

If you commit to late game team fights, try and play around these items as much as possible. If you fight while they’re on cooldown, you reduce your chances of winning the fight and increasing your chances of dying.

Keep an eye on your active items as much as possible, and be prepared to delay fights until they’re up. Ping them too so your team knows not to fight until the item is back up!

Find out what situational or defensive items your champion might want to invest in by checking out the Mobalytics champion page for your favourite champion!

Decreasing how often you die in team fights is actually quite easy if you’re dying on your own. Of course, there will be occasions that you will die regardless, but even reducing a few deaths a game will be highly beneficial.