It takes 2 to tango in the bottom lane, and if either one of you is not on the same page, it’s going to make the lane much much harder. I play both the ADC and Support role, I play the Support role at a Diamond 1 level, and I’m used to playing with my fair share of bad ADC’s, and bad Supports too!

In this part 1 of a 2 part series, we’ll discuss some tips and tricks: a wishlist of some kind to help you play better in the bottom lane. We will give you an insight into what the other player wants you to do during the laning phase to make the game easier too.

Looking for more tips to help you climb? Check out Mobalytics.

Hitting level 2 first in the bottom lane offers up a lot of extra playmaking potential. It can also increase your survivability as you can often level up a dash at level 2 (for example, Ezreal or Lucian).

If you don’t hit level 2 first, then the enemy can do whatever they want to us in the bottom lane and we will pay for it!

To hit level 2 first, you need to kill the first minion wave followed by 3 melee minions on the second wave. If we auto-attack the minions together, we can hit level 2 before the enemy and potentially get an early health advantage.

If we cannot hit level 2 first, back off slightly and play respectfully so the enemy doesn’t all-in you or bully you down with their level 2 advantage.

We all agree one of the main roles of the Support is to buy and place Control Wards throughout the laning phase. However, if you both buy Control Wards, we can have more security in the bottom lane and keep ourselves alive for longer.

Having 2 Control Wards in and around the bottom lane will offer both of you a lot of extra protection, allow you to deny vision and also make plays knowing that the enemy Jungler is not nearby.

If the Support has placed a ward in the river, you could place one in the lane, a defensive ward in your jungle or hold on to it just in case the enemy laners destroy their ward so you can replace it.

For instance, if you’re the blue team and the Support has a Control Ward in the tri-brush and the enemy is pushing, you can replace your Control Ward in this bush if the enemy destroys it. Alternatively, if you’re constantly pushing as the blue team and your Support wards the river, you could ward the closest bush to your tower, or the tri-brush instead. 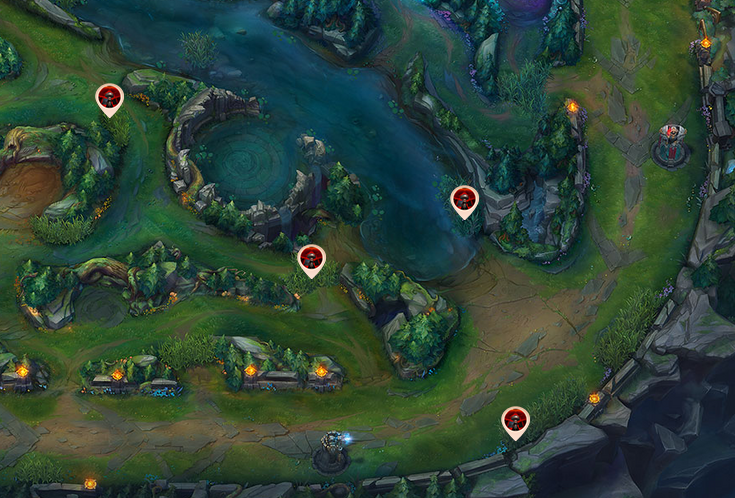 Please note, we’ve placed the lane Control Ward far back, as there aren’t three bushes in this image. But you would place the Control Ward in this bush.

Pushing in League of Legends is a great way of applying pressure and getting gold. However, pre-6 when I am playing an engage Support like Leona, Alistar or Nautilus, there is no way I can play aggressive if the enemy is playing really close to their tower.

When an enemy is close to their tower, it is very difficult to go in as the tower will target me if I get into range. So, if you want the engage Support to engage, you need to keep the minion wave even or closer to our side of the map so there is more room for me to go in and chase them down.

Post 6, depending on the champion, engage Supports can dive (like Leona or Nautilus) but until then, it is really difficult to dive a tower in the early game.

Let’s keep this one short. When you’re playing against a champion with healing in lane like a Soraka, Sona, Nami or anyone who has potent heals throughout the laning phase, get an Executioner’s Calling as soon as you can.

If you don’t get an Executioner’s Calling, it will be tough to kill the enemy as they will outheal any damage you do in the lane. Not all Supports can rush an Oblivan Orb or another item that offers healing reduction- you should get one instead.

Executioner’s is great against lanes that have Nami, Soraka, Senna, Sona and champions like Vladimir and Dr Mundo.

When laning against champions with CC skill shots like Morgana, Thresh or Bltizcrank, please watch your positioning and stand towards the opposite side of the lane while ensuring there is 1 minion between you and them at all times.

If you stand in line or in the open against a champion who has a major CC tool like those, you’re putting yourself at a disadvantage and providing the enemy with an opening where they can kill you. By watching your positioning, you will heavily reduce the enemies kill pressure and increase your survivability.

It’s not going to always be possible, but try and stand at maximum auto-attack range so it makes it hard for the enemy to harass you with basic attacks and get you low in lane too. Pressing “A” on your keyboard will bring up your auto-attack range (if that’s your keybind), so you can see your champions range.

6. Don’t Randomly Use Your Dashes

This somewhat ties in with our last comment. Do not use your dashes aggressively unless it’s really safe to do so. When playing against a champion with good counter engage like Alistar or Leona, they will turn around your aggressive play and lock you down.

It is better to save and hold on to your dashes just in case you need them, as it will increase your survivability and reduce your chances of needing to blow your Flash.

That about sums up our guide on what us Supports want from the ADC through the early game. Stay tuned as we will be creating a separate guide for what the ADC wants from the Support. In the meantime, you can find more tips to improve as an ADC by heading to Mobalytics.

As a final note, this isn’t meant to flame or call out ADC’s; I know how bad some Supports can be and unhelpful some players are in the lane.