4 Tips to Help with Vision Denial in League of Legends

How to Deny More Vision in League of Legends

Vision is a crucial aspect to League of Legends. Everybody knows that they should ward, but not everybody does it. While placing wards is one thing, denying vision is an entirely different ballpark that requires you to pay a lot of attention to the game at hand.

If you are someone who plays on autopilot or doesn’t pay much attention to the game in general, you’ll find it harder to find and destroy wards.

In this Mobalytics guide, we will break down some tips and tricks to help you find and destroy more wards in League of Legends.

What is vision in League of Legends?

There are two main sources that provide vision during the laning phase of League of Legends. One is via Control Wards which grant and deny vision, and the other is through Stealth or Trinket Wards. You can also place Farsight Wards, the third major vision source, in the mid and late game.

Players will periodically get Trinket Wards to place, but they will have to invest their own gold into buying Control Wards. Both are vital and will help you secure picks and prevent yourself from getting picked off by the enemy.

Examples of champions who can clear vision easily

Any champion and role can technically clear vision with ease. Champions with auto-attack resets can clear wards before they expire and Supports or Junglers will be the roles that destroy more wards too as they usually take the Red Trinket.

Leona can easily clear wards for multiple reasons. Firstly, as a Support, she will upgrade her Trinket to the Red Trinket after she has completed her warding quest. She will be able to find wards easily once she has the Sweeper.

Leona’s Q is also an auto-attack reset. If an enemy places a ward that she is close to, she can AA>Q>AA the ward to destroy it instantly. This is very effective at level 1.

Learn more tips and tricks for Leona by checking out Leona’s champion page.

Jax’s W is another ability that is an auto-attack reset. He can easily destroy wards if the enemy places them when he is nearby.

“Here’s to you kid”. Check out Jax’s champion page to find the latest builds for Jax in the Top and Jungle role.

Sejuani is a Jungler, and as Junglers will swap their Trinket for a Sweeper, she should have good vision control and be able to easily destroy wards. She can also get in and out of clearing wards from risky parts of the map (such as inside the Baron pit) with her Q.

Master the Poro rider by checking our Sejuani’s champion page.

How to find and destroy more wards in League of Legends

To make it easier for you to find and destroy wards in League of Legends, it is important that you understand the stats related to your performance.

With these stats in mind, you can see how good you are at finding wards, placing wards and of course, destroying enemy wards.

1. Change your Trinket at level 1 (for Junglers)

Currently, one of the best starting strats for Junglers is to change their Trinket at level 1. Usually, they will start with a yellow ward and then go and place it on the opposite side of the map to the side they’re starting on and then recall. They then change to a Red Trinket and walk back into their jungle.

This early swap allows them to scout for vision and clear wards in the very early game. This is good and will increase the likelihood of an early gank working. It also has the added benefit of spotting any Jungler or champion who may try to invade you at your second buff.

Here’s a great video by the LEC team that breaks down why Junglers in pro play change their Trinket at level 1.

2. How to sweep the river

This is a little tip I’ve learnt over the years of playing Support. When trying to sweep the river, don’t stand too close to either side of the wall while walking from one side to the other. Instead, try and walk within the middle.

However, the problem with doing this is that you may not see wards over the smaller walls. What you should do is pivot and adjust how you walk in the river. For example, walk through the middle but move closer to the edges when you’re past the dead zones. 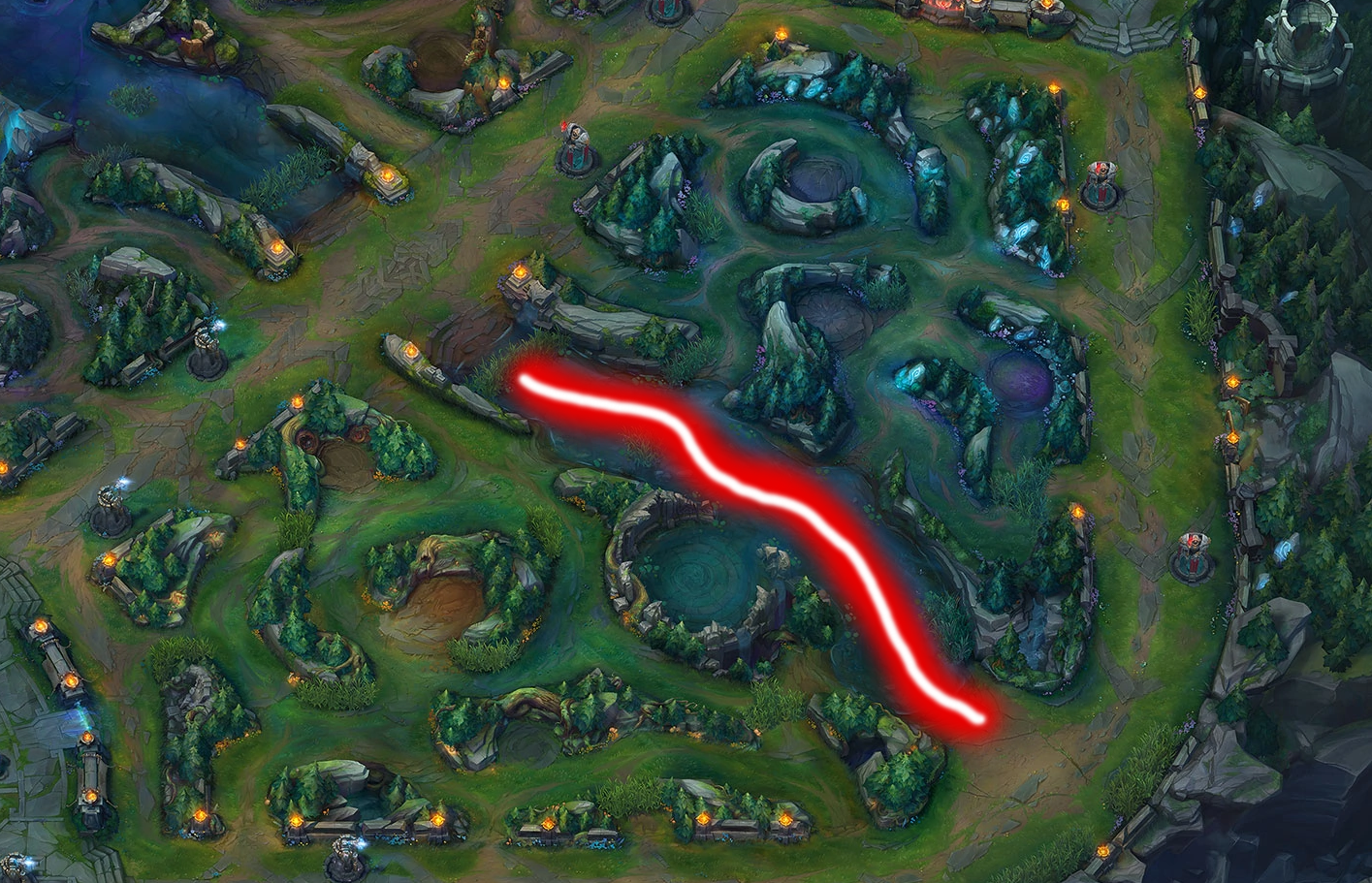 The white line should be the path you take to ensure you cover as much of the river as possible.

3. Complete your warding quest as quickly as possible

For Supports, you need to complete your warding quest as quickly as you can so you can start to place vision and deny vision. To make completing your quest quicker, follow this routine to securing minions. This works for both Relic Shield and Steel Shoulderguards.

Secure 1 melee minion on the first wave, secure another on the second wave. Your third stack will be up on the third minion wave. On this wave there is a Cannon minion. You should secure that minion, and then you would be a good chunk completed for your quest already.

For your fourth stack, use it on another Melee minion, the fifth on a Cannon, etc. Repeat the Melee Cannon part as this will allow you to complete your quest quickly. Avoid last hitting any ranged minions as it will only slow down your warding quest, and you’ll end up completing your quest later.

For Spellthiefs and Sickle, try to harass as often as possible, and make sure you auto-attack the enemies tower as often as you can. This way you will get more gold and complete your quest quickly. Limit trading unless you have stacks so you make the best use of your mana, health and gold income.

4. Ask yourself where the enemy Support has been

If you’re using your Sweeping Lens in the later parts of the game, don’t use it unless you’ve asked yourself where the enemy Support has recently been first!

There’s no question about it. The Support is the person who wards the most throughout any stage of the game. In the late game, they will place vision around major objectives and around high traffic areas.

If you know that the enemy Support has recently been in the local vicinity, the likelihood of there being wards placed by them is pretty high. If they have not been around that part of the map for a long time, then the likelihood is quite low. While you may be able to spot and destroy individual wards, it is important to get as much value out of a Sweeper as possible.

Do not bother sweeping an area of the map where the enemy Support hasn’t been for a long time. For example, if you know they’ve been in the top side of the map, don’t sweep inside your jungle as you will not find any wards there. 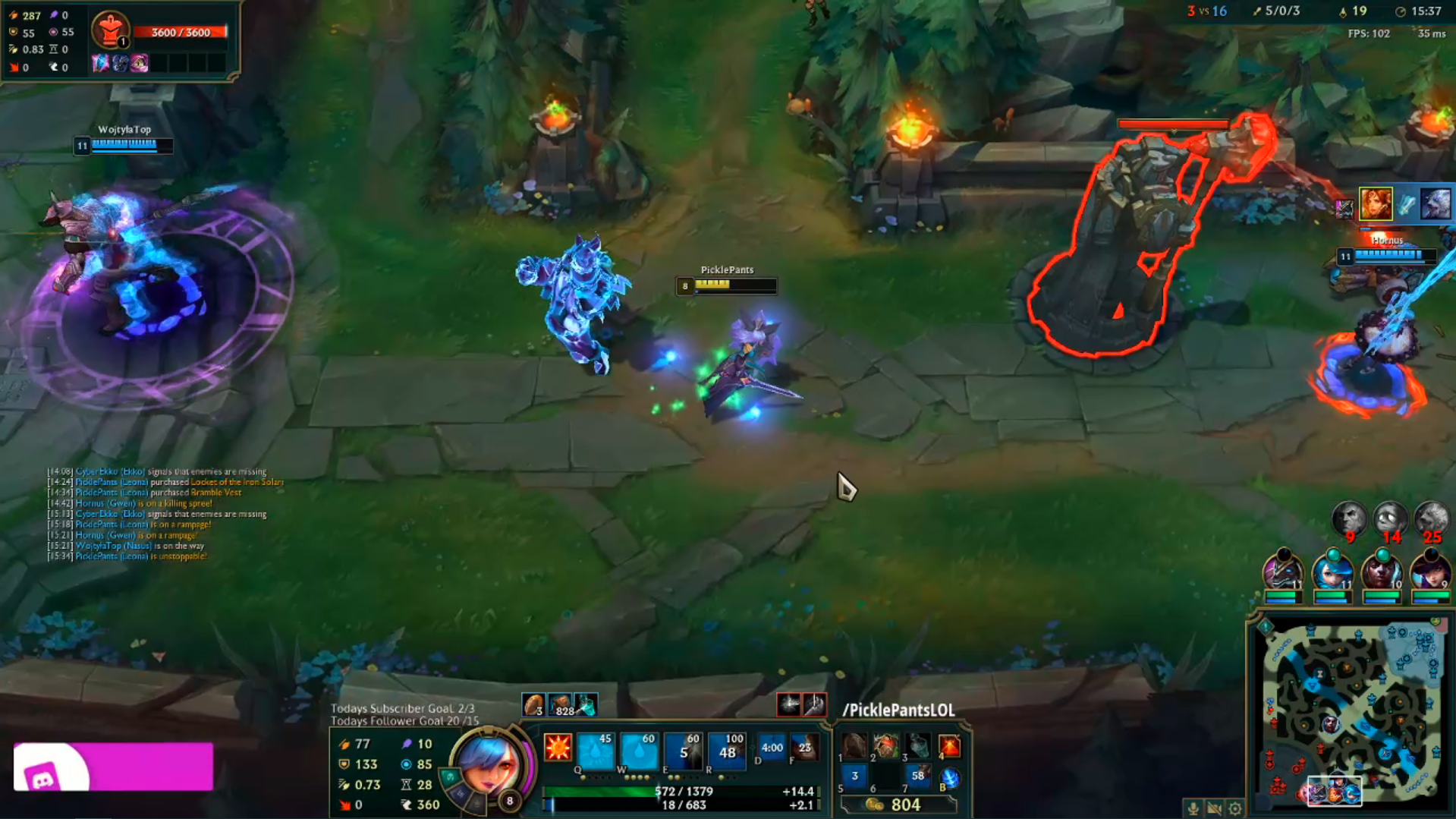 In this situation, I wouldn’t need to sweep because we’ve been pushing so much. We also have Control Wards in the jungle, so there are only a few places to sweep. Personally, I would hold off from sweeping until a later date.

Other telltale signs of potential wards being placed are:

Check who used to have Control Wards in their inventory.

Look at how many wards the enemy Support has on their warding item.

Look where the enemy team recently has been.

I think a lot of Supports are not focused when using their Sweeping Lens. This results in them wasting it and finding zero wards.

Finding more wards is actually easier than most players think. You just need to watch the map, and understand where most players ward. Always keep an eye on the map at all times to make it easier for you to find wards.