How To Maximize Your Chances Of Winning Eco Rounds in VALORANT

Don’t lose hope on the rounds that you are forced to ‘save’ your economy, these rounds are always winnable.

This article will aim to provide you with the knowledge and understanding of how you can increase your chances of winning eco rounds.

These are not easy rounds to win and require communication and planning with your team.

Before we delve into the potential plays that could help you steal these rounds, let’s get familiar with how to best manage your economy.

How to assessing whether there is potential for a half-buy

Not all save rounds have to be played with classics or shorties in corners. It is important to understand how much money you will have as a minimum next round.

This is shown beside your scoreline if you press ‘Tab’. Let’s run through an example. My team and I just lost the round, we are now in the buy phase and our economy is in an awkward spot.

Obviously, full-buying rifles is an impossibility here, hence, we are forced to save. 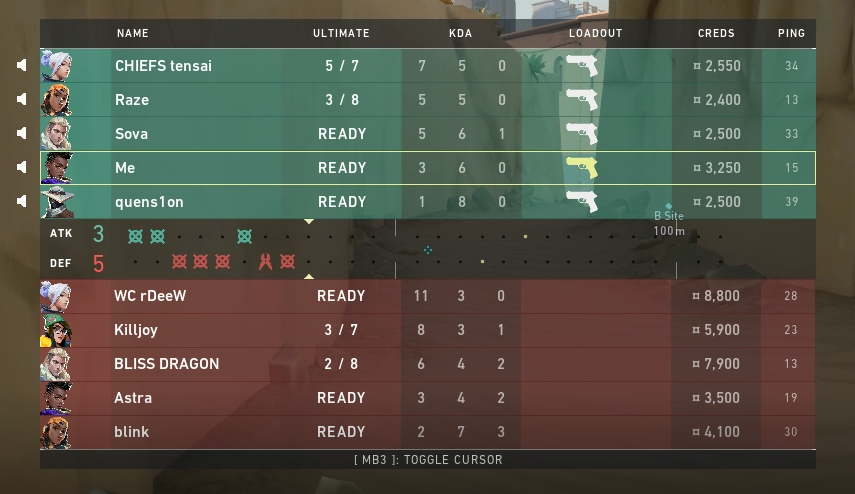 Nevertheless, as a team, we can pull off a pretty solid ‘half-buy’ to help us attempt stealing this round. In case you didn’t know, whilst you are purchasing guns and utility you can see how many credits you will have as a minimum for the following round.

You can see here that even though I have purchased a Marshal, Light Shield, and some Astral Form stars I will still have 4650 credits next round as a minimum.

My team and I planned out that we will attempt to play for picks this round. This is not exactly a well-thought-out strategy but with our relatively strong half-buy we opted to take it to our opponents and were confident with our aim.

Additionally, It is important to understand your own strengths and your own playstyle. This can be very specific, as you might even feel more comfortable holding certain areas of the map as opposed to others.

My teammates felt comfortable with Sheriffs and closer-medium range angles for this round. Personally, I feel very confident taking long-range duels with the Marshal. So I ran the risk this round of contesting B Long. Fortunately, I managed to pick off two players using Operators.

At this point, my Sova decided it was worthwhile burning his Hunter’s Fury to secure the round. He managed to tag the enemy Raze 80, whilst Reyna and I ran up B Long to upgrade our guns and take the Operators.

There was a lot of commotion on the B side of the map so we decided it was best to rotate with a numbers advantage and ended up securing the round.

Other considerations when managing economy

Does your Jett have her Bladestorm? Take into consideration your team’s abilities

Forcing after pistol round

This is best when your team opts to completely save and play mainly with Classics. When you can’t afford to half buy and your team doesn’t have weapons like Sheriffs to try contest common lines of sight it might be safest to simply hold for defenders to push.

Defenders may get restless and impatient if you drag the round out. After 20 or 30 seconds they may try pushing out beyond their site. For example, if you were holding for defenders to push on Haven you may want to set up something like this. (Be sure to deny enemy information by staying silent).

There are only 4 positions marked out in the image below. The 5th player can double up somewhere or attempt to lurk further beyond these points after the 20-30 second mark 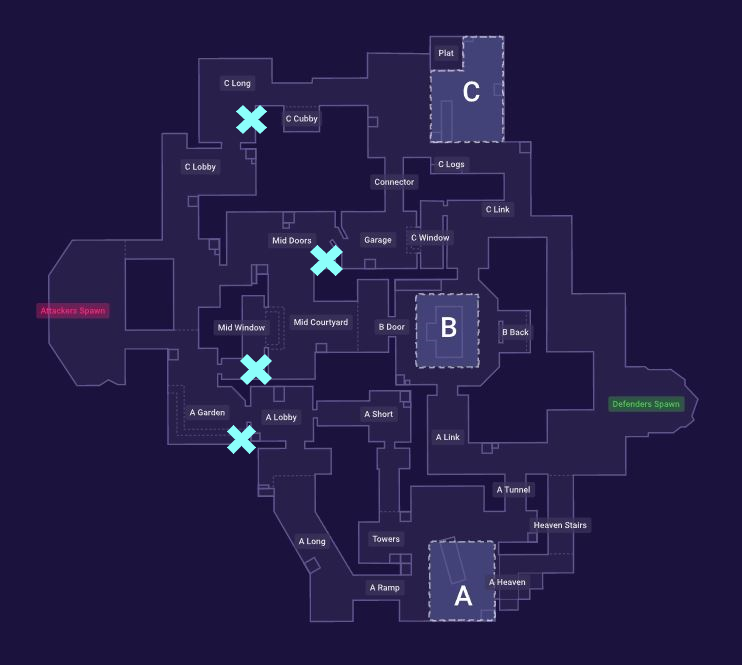 Working together bundled up as a group can overwhelm enemies who are holding areas by themself. This is very much a W key sort of tactic where you want to trample over the lone enemy and force them into being traded out. 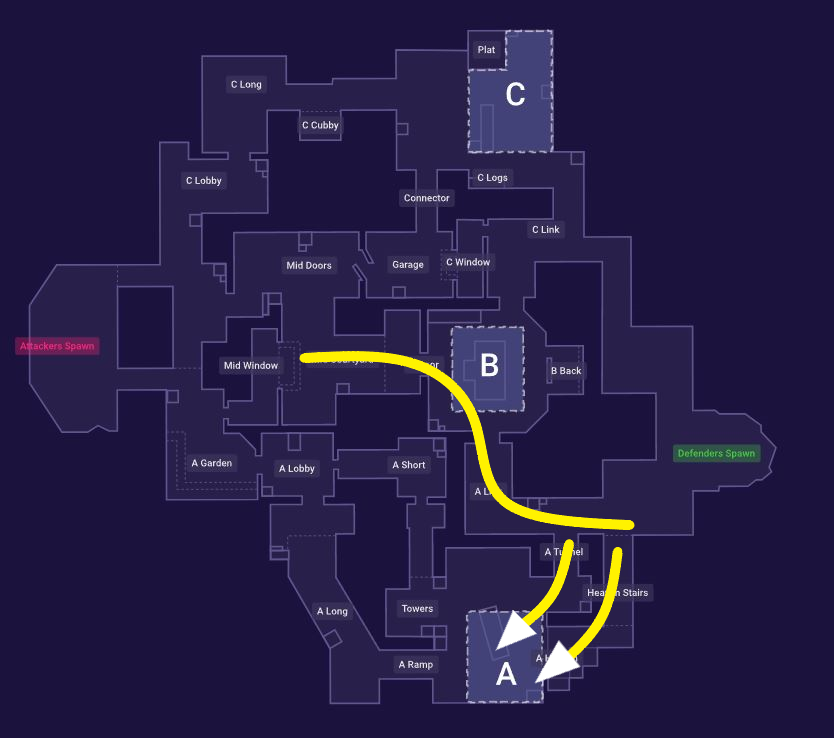 For example, if you are aware that there is generally only one enemy holding B site on Haven, try rushing the site via window as fast as possible. (A flash of any sort out of Window can help save your team from losing a life when jumping out). If your team managed to eliminate the opponent on B make sure to have a healthy teammate using the newly acquired rifle.

Deciding to hold B site with your inferior weapons may lead to a very easy retake by the enemy. This is why it is recommended to continue pushing deeper past the bombsite to pressure the enemy into taking unfavorable gunfights where they are outnumbered.

For example: Push out of B into A Link to hit A Site. Sticking closely beside your teammate with the rifle will increase your chances of being able to recycle it if they die but are traded out.

By choosing this path of attack you will again force the defender who was on A site to take a duel where they are outnumbered, allowing you to potentially secure an efficient trade.

If done successfully, you could find yourself in a 3v3 with 2 rifles stolen. Furthermore, you have secured A Heaven control and most likely avoided enemy utility which was set up for the A Long/ A Sewers side of the map as opposed to Defender Spawn side.

Continuing through to A Link catches the enemy off guard as you already have secured B Site yet have surprisingly decided to push further as a team to seize control of A and try to isolate opponents and whilst avoiding utility. There are too many dangers by simply opting to plant and secure B.

You are clustered together (most likely with pistols) and probably won’t be able to resist the barrage of enemy utility as well as their superior guns. With the example above you end up with 2 rifles in a likely 3v3 scenario.

Having 5 agents holding down one bombsite will allow you to set up crossfire angles and hopefully trade off fallen comrades in the hope of upgrading to the enemy’s rifles.

Unfortunately, if the opponents got lucky by hitting the other site it can be very difficult to retake that since you will have much weaker guns. However, that is the nature of eco rounds it is a risk-reward process and you are hoping to get lucky when 5 stacking a site.

This can catch opponents off guard and if they don’t have anyone holding mid it can open up the opportunity for fast flanks. Similar to previously mentioned strategies, it is ideal to stay together as a group in the hope of contacting a singular enemy whilst being in a pack of teammates.

Winning eco rounds is definitely not as easy as it sounds and there are innate flaws within each strategy. Pulling off these plays and winning the round is not something that happens every game.

Inevitably you will lose most of the rounds you decide to save or half-buy on since you are at a significant disadvantage from the start of the round. More often than not you will have less health as the round starts, weaker guns and less utility.

Often this is exactly what will lead to your downfall but what this article aims to do is instill a sense of confidence into your gameplay and your understanding of eco rounds. It can be a real tilter for the enemy if they see ‘thrifty’ pop up on their screen after losing the round.

So give it your all when trying to win these rounds, sometimes all it takes is one pick and one stolen rifle to swing the round back in your favor. Hopefully the next time you are forced to save you are able to communicate a strategy for your team to execute, who knows, you might just be able to steal the round.

Let us know in the comments below some of your go-to eco round strategies. To understand which different guns are meta, check out our VALORANT gun tier list.