What are the Valorant maps?

Valorant is a 5v5 tactical shooter created by Riot Games. So far there are five maps with one objective: planting or defending against a bomb (called a “spike”).

The six playable maps are called Bind, Haven, Split, Ascent, Icebox, and Breeze. There is also a shooting range where you can sharpen your aim or practice simulated situations like defending a spike you planted.

Each map also has two ultimate orbs in neutral locations that teams can try to grab. The orb grants one point the ultimate of the agent who picked it up.

Another general thing to note is that some walls and terrain can be fired through. As a rule of thumb, anything that leaves a bullet hole can be penetrated.

In this article, we’ll give you quick overviews for each map and their points of interest.

If you want to learn even more about the game, check out our companion that will help you master all Valorant characters, Valorant maps, and Valorant guns. Bind is a two site map (A and B) that has attackers infiltrating from a beach coast.

Site A is accessible through an alleyway in the middle of the map called “short A” or through a building’s hallway called, “showers”.

Site B is accessible by a path along the beach called “long B” or through a marketplace and window called “hookah”.

These allow both attackers and defenders alike to quickly rotate or flank the opposing team.

The teleporter is incredibly noisy so it is somewhat risky to do so if your enemies are expecting it. You can also throw projectiles, drones, and guns through teleporters.

One ultimate orb can be found inside the showers while the other is at long B right in front of the teleporter.

For an in-depth look, check out our advanced Bind guide! Haven is a three site map (A, B, C), which is also its unique aspect as most bomb/defusal maps in FPS games tend to be two sites.

Site A is accessible through an L-shaped’ alleyway called “long A” or through an underground passage called “sewers” (A-short).

As expected, long A is more suited for long-ranged engagements while the sewers will bring close quarter combat.

Site B is accessible through a window which leads into an outdoor courtyard. The courtyard also leads to a set of doors called “garage” which allows attackers to wrap around to Site B.

The garage also acts as a connector to Site C, so attackers that make it through can threaten both B and C.

The other entry point to Site C is through a straight alleyway called “long C”. Long C has a cubby partway through so attackers can use smokes to advance safely.

For an in-depth look, check out our advanced Haven guide by Activ! Split was added as of the first day of closed beta. Its two sites are on the far left and right sides of the map with a middle area that provides high ground dominance.

The unique mechanic here is that there are ropes that allow players to quickly ascend or descend quietly – you can find them at A Sewer, B Rafters, and Mid Vent.

The ultimate orbs can be found at at A main and within B main, also known as the garage. Ascent was the first new map to be added since Valorant’s official release.

It’s a two site map that is located in Venice, Italy.

Compared to the other maps, Ascent has the most open area with a large courtyard at the center of the map.

The courtyard offers a quick short cut to the sides of the map but is risky to cross since it doesn’t contain that much cover.

Another signature feature that is unique to Ascent is its closeable doors.

At each defensive site, there is a door that can be open or closed using a switch.

The door is armored but can be broken. 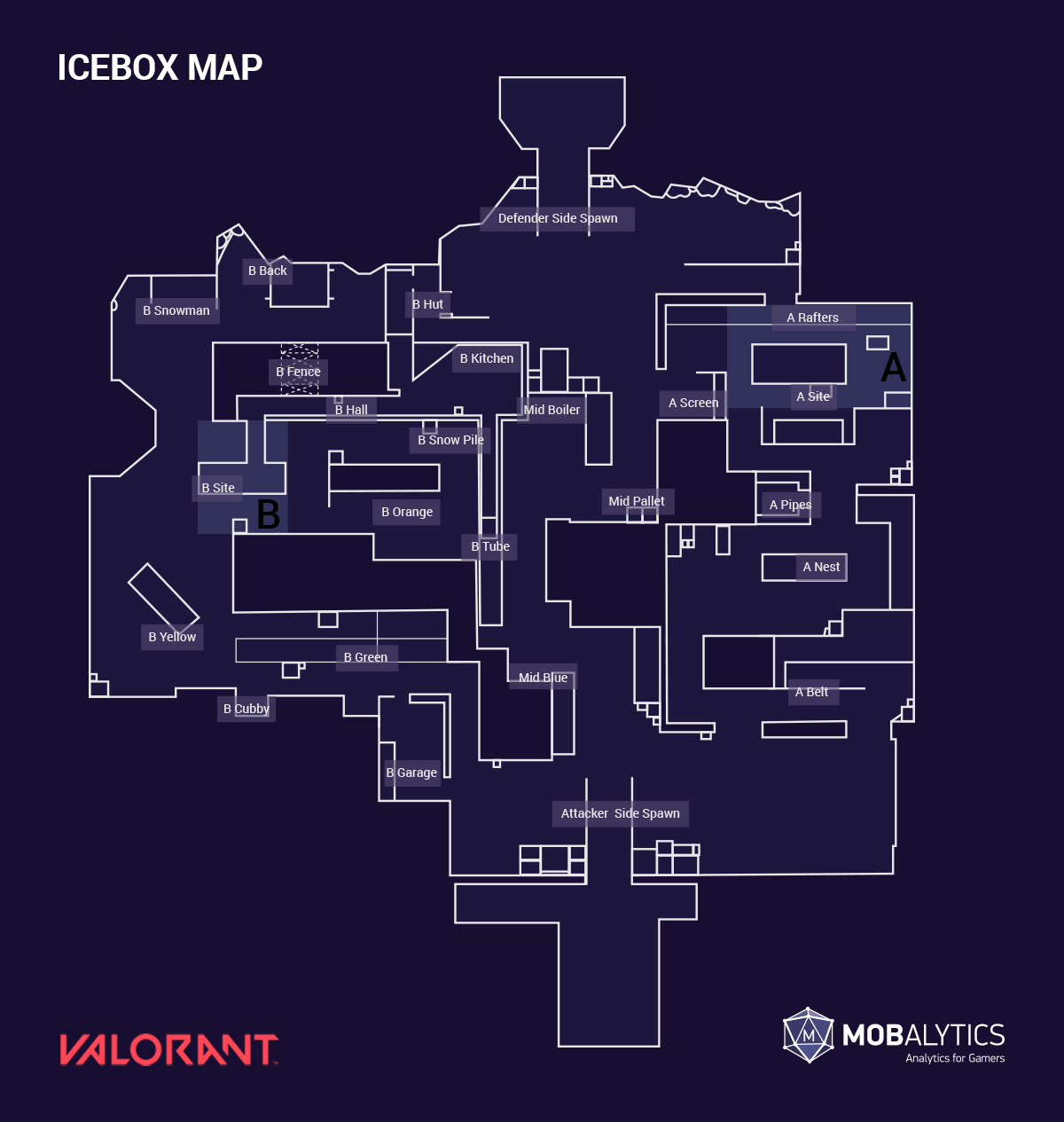 Icebox was released at the beginning of Act III and takes place in a tundra climate. The map has a ton of verticality and angles to cover so it’s the most complex map released yet.

There are unique features such as horizontal ropes (that work identically to Split’s vertical ropes) and two-tiered planting sites, meaning that you have a low ground option to plant on and a high ground one.

It’s a great map for agents like Raze, Jett, and Omen that are able to make good use of all the boxes while agents like Sova and Cypher may struggle. Sova because it will be easy to hide from his sonar arrow and Cypher because there are many access points so his Trapwires may not get as much value as usual.

For a deep dive, check out our Icebox guide!

Breeze was released during Episode 2 Act 3 at a tropical island location. It’s one of the largest maps in size and features some of the biggest sites in Valorant yet. 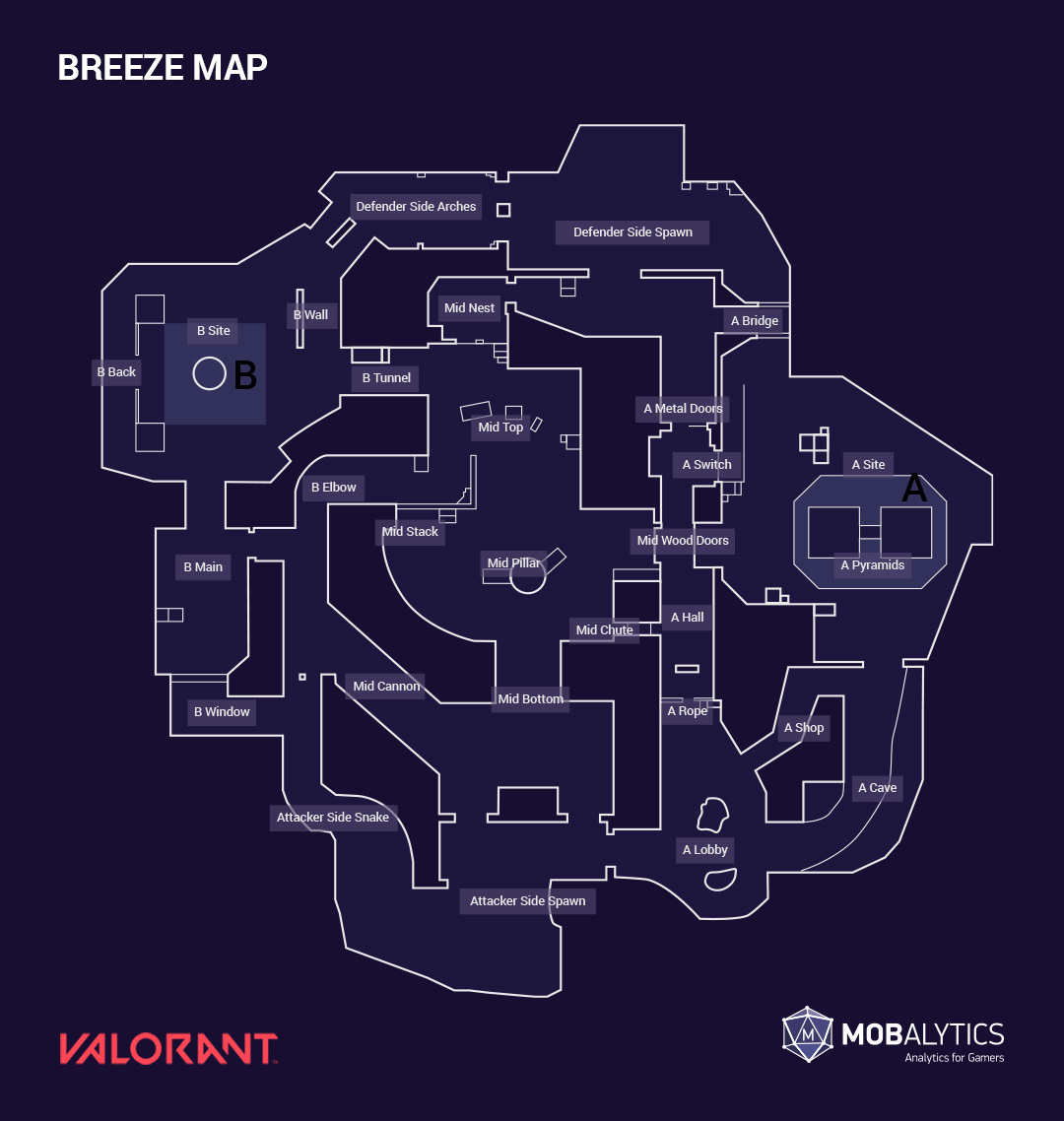 It features verticality with ropes and second floors and there is the unique map feature of one-way drop doors.

Due to its size there is a lot of potential for lurkers to make game changing plays on this map. Hence, Agents that are well equipped at watching and managing flanks do well here, I.E. Cypher and Chamber.

Agents like Viper, Skye, Sova, Jett, Cypher and Chamber excel at controlling round-to-round gameplay on this larger than usual map.

For an in-depth look from our experts, check out our Breeze map guide. 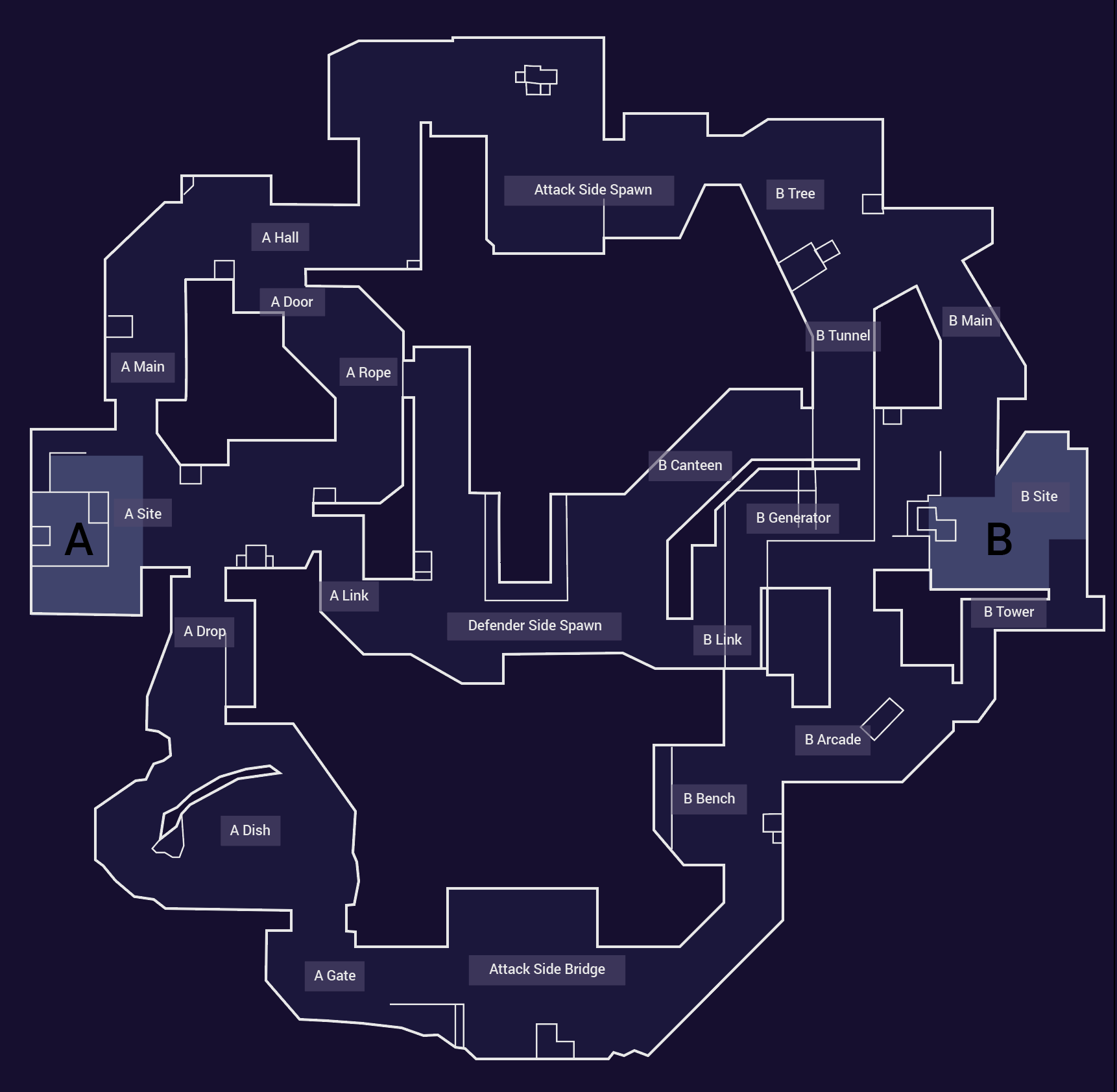 This map is by far the most unique and unconventional tactical shooter maps that Riot have released. The map is suffering a ‘fracture’ at its center which leaves it mimicking the shape of the letter H.

Weirdly enough, defenders are spawned in at the very middle of the map whilst attackers can choose to begin their round on either side of the center (by navigating a massive zipline). This weird setup at the start of rounds makes things tough for defenders and balances out the traditional ‘CT’ sided favoritism.

There is a wide variety of potential strategies for both defenders and attackers since there are simply more entry points, chokepoints and pathways to bombsites than other maps.

Agents like Viper, Killjoy, Breach, Jett, and Chamber are staple picks for this map since their utility and ability to control sections of the map are superior to other agents.

For more information about Fracture check out this in-depth guide from our expert VALORANT gamers.

The last existing map is dedicated to practicing and honing your skills. Here, you can change your agent and guns at any time (you can even test characters that you do not own yet). At the shooting range, you can shoot at dummies that spawn at different speeds and settings such as strafing.

There is also an area dedicated to shooting long-distance targets to test the effective range of guns.

Lastly, you can also practice scenarios such as planting a spike and then defending against bots to improve your composure and ability in clutch situations.