Paladins are an advanced class available to warriors that mix damage and support to protect and buff your allies. This makes them extremely valuable in end game content but also more difficult as they try to time their skills properly to prevent damage.

Most of the playstyle revolves around giving damage reduction buffs to nearby allies while also increasing their damage output at the same time. Later with your class engraving you’ll be able to grant damage buffs and a heal over time from your Holy Aura. Their abilities also have high stagger and countering bosses is a key part of their kit.

Paladins are the tankier of the supports and will keep these buffs up for most of the time but they do require better positioning than other classes and can’t keep up with the Bard’s healing.

While they are a support, paladins can still use their skills to deal some good AoE damage so clearing content yourself won’t be a problem.

If you’re interested in leveling this class, check out our Paladin leveling guide.

When it comes to your other advanced warrior classes – the berserker is focused on dealing damage and gunlancer is more of your traditional tank. The Gunlancer does have access to some support skills but focuses more on disruption while being extremely tanky.

Compared to the other support class the Bard – Paladins will be much tankier and focus a bit more on damage while maintaining damage buffs and damage reduction buffs to the team. The bard tries to be more defensive, keeping allies alive longer with shields and heals.

To see how well Paladin performs in both PvP and PvE, please, read our article on the best Lost Ark classes in the current meta.

Like most classes Paladins will build up their Piety meter during combat but have two choices when it’s filled.

Holy Aura is used for group play and will boost your team’s damage but also reduce damage and heal them once you have your class engraving.

Sacred Executioner is your damage version – attacks and punish skills now deal more damage and have a higher range.

During normal gameplay, you will be providing shields and damage reduction to your allies around you while rotating between different skills that give damage buffs. While position is key for most of your skills – you will also be applying debuffs and trying to counter boss attacks too.

In PvP, Paladins are still a tanky support class but they can output pretty big damage as well, especially if they use their piety for sacred executioner instead of buffing their allies.

Paladins excel at using their skills to engage and set up their team, which combined with the shields and damage reduction make it great to pair with other dive classes.

Sacred Executioner is even better for this as it extends the range – you’ll often be able to catch enemies off guard with crowd control and set up kills.

Your job is to protect allies, which you can do with good timing of skills, while also looking for an opportunity to crowd control enemies and dive in.

Your main mobility spell that deals some damage but also grants a shield with a common tripod. Using Excellent mobility, shining protection and ambush attack are common starting points.

A combo skill that knocks targets up and deals damage in front of you. Taking stigmata, challenger’s will and broad slash will make this more of an AoE damage skill.

Deals burst damage in front of you and is one of the higher damage abilities you have access to. The most common tripods are stigmata, weak point detection and condensed energy to boost that damage all the way up.

Another common skill you’ll use a lot that spins and deals damage. Rune prison pulls enemies in and with acuteness plus express fury you’ll deal much more damage playing alone.

One of your main defense skills that gives a shield to all allies around you. Quick pace, Robust Protection and Vow of Light gives movespeed and improves the shield but also heals at the end, even if now has a higher cooldown.

Summons a circle of light and deals damage but with the right tripods it becomes much more supportive. Shield.. well.. Gives a shield, wide-angle attack improves the radius and finally Grace reduces incoming damage by 70% for 1 second. Grace is extremely strong but requires good timing to make proper use of it.

As with all classes, the Paladin has access to two Awakening abilities.

Judgment is the preferred skill for almost all builds.

Every Lost Ark class has access to engravings that will focus your playstyle in one particular direction. For Paladins, you will choose between Blessed Aura and Judgment.

When used with a coordinated group or when you know the fight and have a window to burst the boss this can be even more powerful.

The easiest stats for this build is to prioritize specialization and swiftness afterwards. This will allow you to build your meter faster and make the aura more effective.

Your DPS choice, increasing your punish skills damage, the piety meter gained from those skills and increasing the duration of your sacred executioner. This offers a huge boost to your damage but pales in comparison to Blessed Aura for supports.

During solo play, this will help you take down bosses much quicker with your Holy Sword however in group play it cannot make up for the damage boost.

Focus on Swiftness and Crit if you want lower cooldowns, better attack speed and bigger burst to clear content faster. 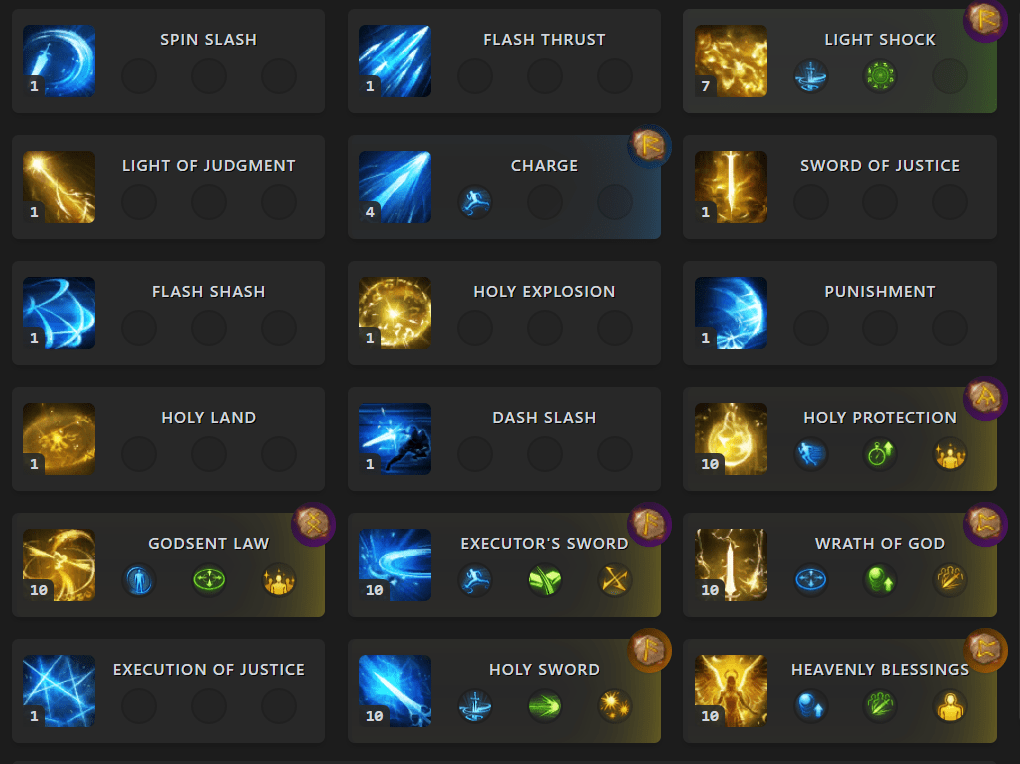 This build used Blessed Aura class engraving as the main engraving. This build prioritizes the use of the Holy skills to give buffs to your party members while charging your Piety meter and once the gauge is full use Holy Aura to heal and buff your party.

Here are some of the skill explanations and tripods you will take (Make sure to max your Holy skills first which include Heavenly blessing, Wrath of God, Holy Protection and Godsent Law (level 10) and at least 4 points in every Punish skill and if you have enough skill points, level them in the following order:

This build used Judgment class engraving as the main engraving. This build prioritizes the use of the Punish skills to do damage and fill your Piety meter and once full, use it to enter Sacred Executioner mode which increases the damage and range of your Punish skills greatly.

Here are some of the skill explanations and tripods you will take (Make sure to max your two holy skills (Heavenly Blessing, Wrath of God) and your main damage Punish skills which include Holy Sword, Executor’s Sword, Flash Thrust and Flash Slash (level 10) and at least 4 points in every other skill and if you have enough skill points, level them in the following order: 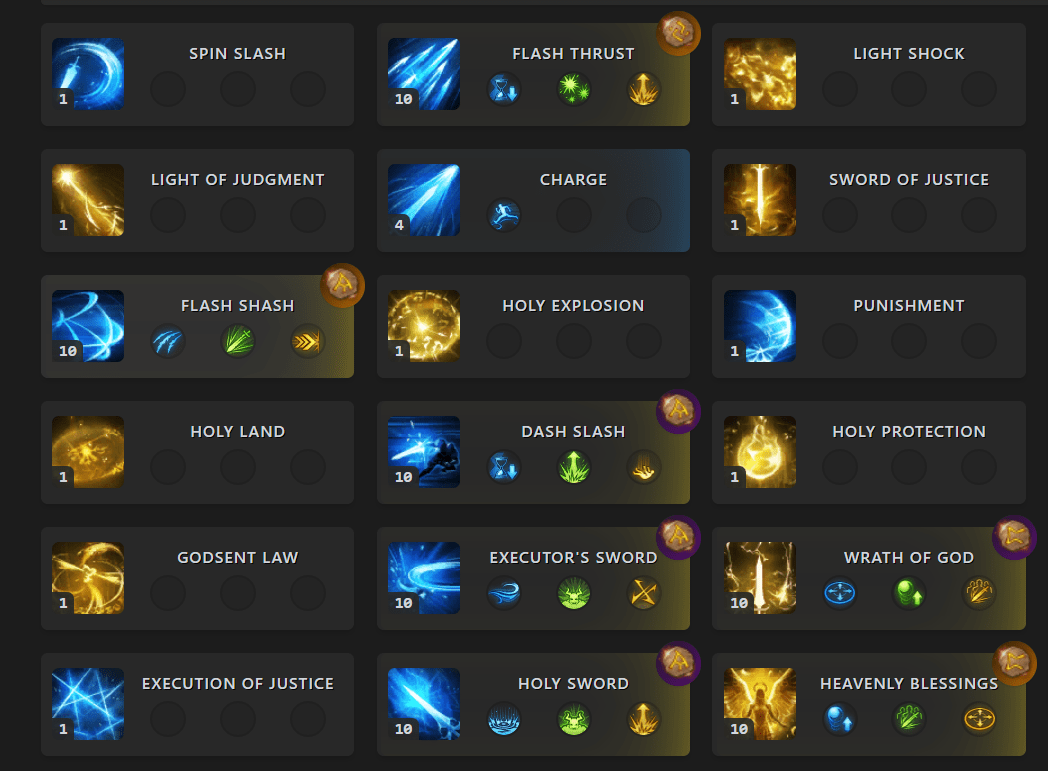