The Gunlancer is the only Lost Ark class that can be considered a “tank” by traditional MMO standards. He has a taunt, a huge shield, and can absorb a ton of punishment. If you are looking to stay in melee and obliterate your foes while ignoring mechanics, look no further.

Remember that Lost Ark is not a traditional MMO and players don’t manage enemy aggro. That means that the Gunlancer has to do damage like other classes, and they do plenty of it. Their main function is being a tanky damage dealer with some support skills.

The class has a good balance of AOE and single target skills, allowing them to wipe out hordes of mobs quickly without flinching or to focus the boss with their massive stagger abilities, stunning them.

Their skills have a lot of utility- stuns, pulls, taunts, and electrocutes that allow them to control the battlefield and shields plus buffs to keep their allies healthy. Combine this with their ability to plant themselves anywhere and not be moved, and a great Gunlancer can dramatically change any fight, PvP or PvE.

Gunlancers may feel slow at first, but once you get used to their mobility skill jumping you backward, you can use that in combination with their leap and charge to move across the battlefield. You won’t feel as agile as other classes, but you won’t be as mechanically complex either and can focus on using your impactful abilities at key times. If you’re interested in leveling Gunlancer, check out our Gunlancer leveling guide.

Currently, the other two warrior classes are the Paladin and the Berserker. The paladin focuses primarily on supporting their allies on the front lines, and won’t do as much damage or be as tanky as a Gunlancer. The Berserker is going to do more damage than you more easily but this comes at the cost of defense and support skills.

Other melee classes like martial artists and assassins will be more mobile and have more combo-oriented moves, so you will have to rely on your hard-hitting abilities and your tankiness to make the most out of the Gunlancer.

You can check the performance of Gunlancer in the current meta in our list of best Lost Ark classes.

Gunlancers build up their Shield Gauge by doing damage with their skills. You have two options on how to use it:

Gunlancer’s are a highly valued class whose job is to control the fight by interrupting the boss’s key abilities with Taunt while doing your damage rotation. To stay in melee range and do this effectively, Shield Gauge needs to be built and used efficiently.

On top of that, a Gunlancer’s abilities debuff the boss, and knowing when to use group buffs can dramatically impact the fight. If you want to focus on battle strategy, and don’t like mechanically demanding classes, you will feel right at home here.

In PvP, Gunlancers focus on disruption and burst damage. You have several abilities which stun and displace foes. Your allies will rely on you for peels, and you can support them with buffs as well.

Offensively, you have some great burst that enemies usually don’t expect. Using your Defensive Stance for CC immunity wisely will allow you to get your damage off no matter what. If pulling your enemies off your allies and into your calculated burst sounds like a great time, this is the class for you.

This is your taunt. You are the only class in the game with a taunt. You are the only class capable of standing there and shrugging off whatever the boss might throw at you. It’s also amazing for canceling deadly boss attacks and making the vulnerable, meaning it gets more value the smarter you become as a player. This skill is also great for clearing low-level mobs.

Having a big shield not only allows you to tank damage other classes can’t, but also lets you hit things really hard with it. Bash is valuable in all gun lancer builds primarily because it makes the boss vulnerable to damage AND it gives you a self-buff to do more damage. It can also counter bosses from the front!

This allows your otherwise slow self to cross great distances in one (or two if talented) bounds. It also does good damage on impact and leaves a crater that continues to damage foes.

This is your hardest-hitting ability, turning your lance into a cannon that can be charged up. Does a ton of damage and heavily staggers foes along with destroying weak points. It can be talented for AOE and instant cooldown reduction, and can even catch players off guard in PvP with how much damage it does.

Another great mobility skill. The Gunlancer lowers his shield and turns into a missile hurtling towards foes. Not only can it protect you from damage, but it does good damage and staggers as well.

The Gunlancer raises his lance in the air and summons a thunderstorm that radiates outwards and does massive AOE damage, and respectable single target damage. It will also electrify foes apply hard CC and stagger.

As with all classes, the Gunlancer has access to two awakening abilities.

Summon a massive lance to impale foes in the target area and subsequently buff all party members crit rate by 10%. This is your damage awakening and can be used to help your party speedrun content or push damage checks. It also has significant weak point destruction properties.

Guardian’s Protection is the more versatile of the two and is usually taken to ensure full shield uptime for your Gunlancer. Lance of Judgment has its uses and can be valuable when you need destruction and damage for key boss phases.

Every Lost Ark class has access to engravings that will focus your playstyle in one particular direction. For Gunlancers, you will choose between Combat Readiness and Lone Knight.

They are two completely different playstyles and were nicknamed Blue and Red build because of the color of skills that you would use in each. 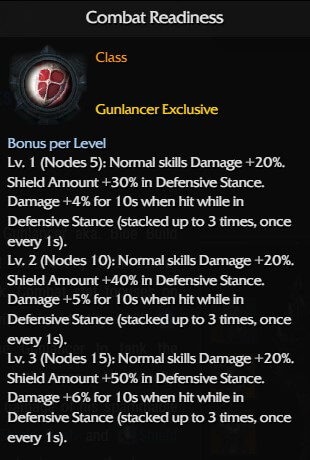 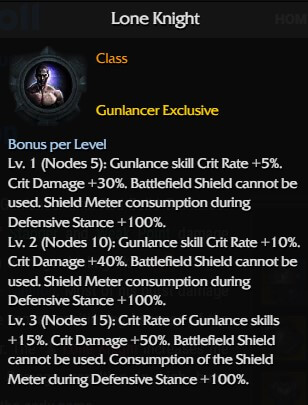 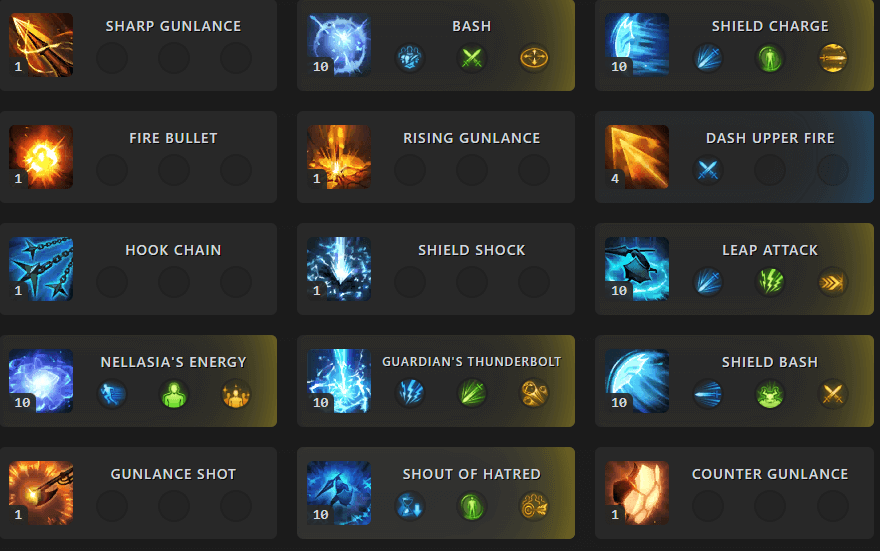 This build encourages you to take all your blue skills that scale with specialization. Your focus is to keep a healthy shield gauge so you can stay in Defensive Stance, and hit the boss with your full rotation following Bash. Of course, you will taunt and support your allies while doing this!

Feel free to replace Nellasia’s with Surge Cannon or Shield Shock when soloing, or when you don’t care about your teammates 🙂 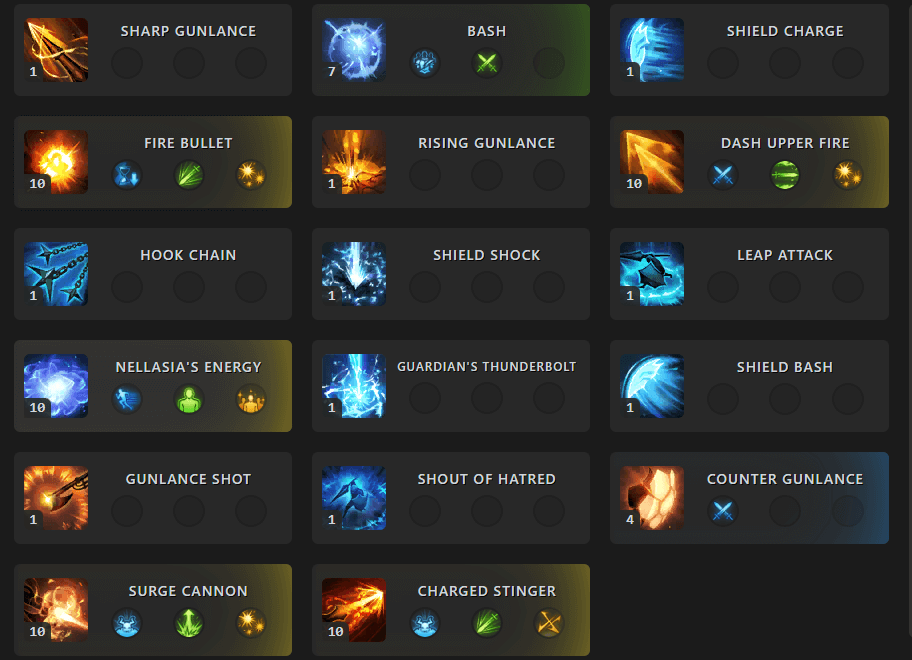 To play this build effectively, you need to really nail your burst rotation, and do it when the boss is not immune to taunt or about to move.

You always open with Bash and make sure your shield is up so you can not get interrupted while Surge Cannon is charging. If you can pull this off effectively, taunt the boss, and shield your allies, it feels great!

Here are some of the skill explanations and tripods you will take (Make sure you have 4 points in every spell and then max them out in the following order):