More of a Rogue than an assassin, Deathblade is a highly mobile, melee, damage dealing class that can do both consistent and burst damage.

They are unique as they are one the few classes that utilize many charge-based skills.

Their identity allows them to enter a powered-up state where they gain extra speed, damage, and reduced cooldowns before delivering a powerful strike with your Blade Surge. Depending on the build you choose, you can maintain those buffs indefinitely or sacrifice that to go all-in on your Blade Surge.

So if you’re looking for – a class that looks badass while cutting through the battlefield then Deathblade is for you.

Note that this article focuses on PvE. To learn about PVP, check out our Deathblade PVP guide by the #1 Deathblade from RU.

If you’re looking to level this class, we recommedn you to read our Deathblade leveling guide.

Compared to the other assassin classes, Deathblade is the only one that utilizes many charge skills. This creates a completely different feel to playing the class than something like Shadow Hunter who uses instantaneous normal skills.

Compared to Shadow Hunter, Deathblade has much more mobility to get around and dodge attacks but their skills have longer animations than Shadow Hunters.

When looking at Deathblade next to Reaper. Reaper has more mobility but Deathblade is much more forgiving due to having superior health and defense stats than Reaper.

In order to check how well Deathblade performs in current meta, please check out our PvP and PvE tier list for Lost Ark.

Deathblades identity is her Death Orb Meter. You generate Death Orb Meter by landing your abilities on enemies. There are three Death Orbs and once all of your Death Orbs are filled, you can enter Arts mode which gives many buffs like attack speed, movement speed, damage, and cooldown reduction until Arts mode runs out.

While in Arts mode, you can activate your identity again in order to use Blade Surge. Blade Surge is a single hit that does a massive amount of damage but immediately ends your Arts mode and its buffs.

Deathblades are a class that revolves around landing their skills so they can generate their Death Orbs as quickly as possible and enter Death Trance.

They are a high mobility class that utilizes charge skills to deal massive amounts of damage over time with their Remaining Energy build or massive burst with their Surge build.

Deathblade is an aggressive melee class that uses its super armor, high damage, crowd control, and mobility to overwhelm its opponents.

It’s important to be decisive with your engages when your cooldowns are up as a Deathblade because of how hard it is to contest their abilities as well as continue her combos through multiple enemies because of her push immunity.

Once you engage as a Deathblade, you can continue your combo or easily disengage with one of your many mobility skills.

It’s important to keep an eye on your cooldowns before engaging because overcommitting without the proper defensive skills to back yourself up will get you caught.

Knock up and mobility skill all in one. The knock up effect is left behind after the dash and is delayed so its most useful for baiting opponents or punishing over aggression.

Crowd control, damage, and push immunity skill. Can be used as part as combos as well as a counter engage to your opponent if you can predict them well enough.

Your main damage skill. Use as part of your combos and is extremely devastating when your opponent does not have a roll.

Movement and attack speed buff that also grants you paralysis immunity. Very important buff that you should always activate before going in to engage.

Dashes through your target and does damage after a short delay. Flash Blink is your primary awakening for both Remaining Energy and Surge builds. It is a quick awakening that generates you a lot of orbs while putting you in a position for a back attack.

Attacks your foe with a flurry of attacks. Blade Assault is a hold skill and requires you to stay still for a long period of time. This makes Blade Assault much harder to use than Flash Blink even though Blade Assault does a lot of damage.

Every Lost Ark class has access to engravings that will focus your playstyle in one particular direction. For Deathblade you will choose between Remaining Energy and Surge. 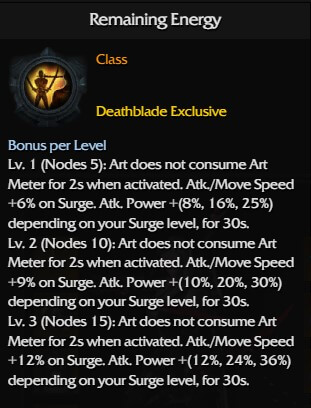 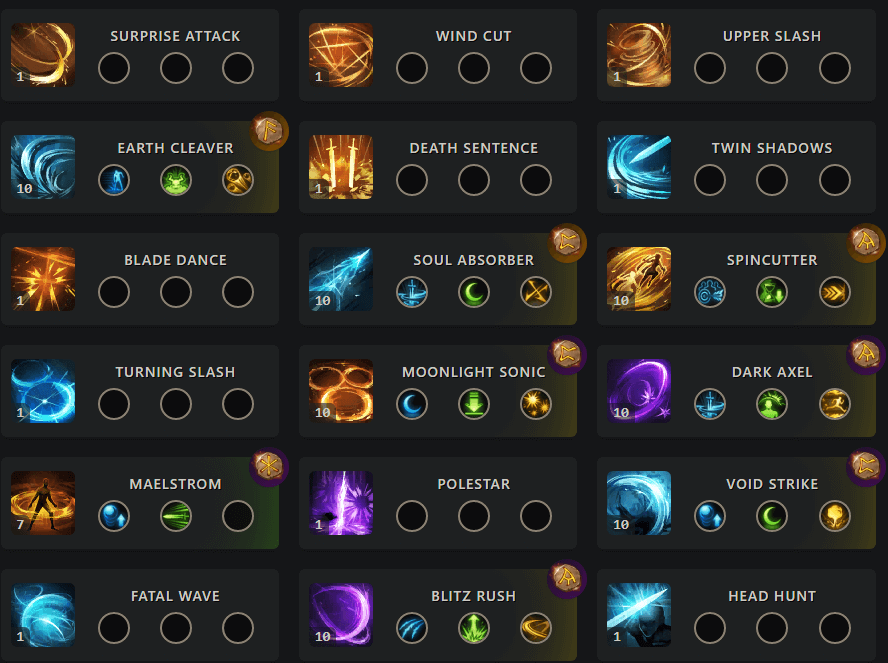 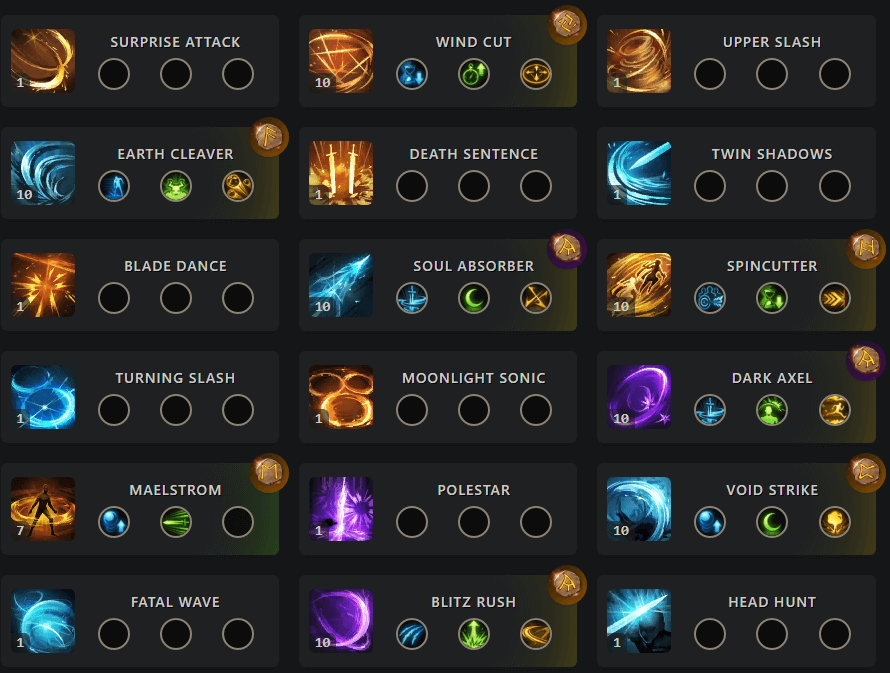