Shadowhunters are an advanced class available to assassins that have a mixture of up close damage and ranged abilities. You’ll be playing around your shadowblades or transforming into a demon to quickly demolish your enemies. This class is listed among the best classes for both PvE and PvP.

They are one of the most beginner friendly melee classes you can play having a straight forward set of skills that still bring a lot of damage to the table.

You do have amazing mobility and short cooldowns on some abilities but sometimes you will find yourself waiting for them to come back up. This mobility is desperately needed, as you’d expect as an assassin shadowhunters do not have the highest health totals outside of Demon form.

If you’re looking for a high damage melee class that has a mixture of melee and ranged attacks plus some awesome demonic abilities then Shadowhunter is the class for you.

When it comes to Shadowhunters vs Deathblades – the biggest difference is the ability to access two forms with their demonic mode but they also deal great damage from up close and from further away at range. This makes them great for beginners and good for solo content.

Deathblades focus more on party buffs, high damage attacks and great mobility. They need to attack targets from behind so positioning is more important but they can pull off amazing combos when played properly.

Shadowhunters have two distinct playstyles with their normal mode or demon mode. In normal form you’ll be concentrating mostly on normal abilities and attacks. You’ll still build up your shadowburst meter but you’ll spend it on empowering skills instead of becoming a demon.

If you want to play as a demon then you’ll focus on filling your shadowburst meter with intrude skills as quickly as possible allowing you to transform and gain a new set of skills, more health and movespeed.

In demon form your skills are extremely powerful and they will also stagger and knock down enemies. You cannot be staggered yourself but you can still be stunned and knocked back. Once demon form ends you will enter composure mode and be unable to fill your shadowburst meter for 30 seconds.

Shadowhunters in PVP rely more on their mobility and range even though they are a melee class. You’ll be looking to poke and catch players who don’t have their stand up or defensive skills so you can burst them with big demon form abilities.

You have a lot of damage and a lot of mobility but you don’t have huge amounts of health or push immunity so you’re not a frontline damage dealer.

Shadowhunters are pretty good in 1v1 situations but you’ll be fighting from range and dashing around a lot.

Most of your big skills are also skillshots so if everyone is dashing around you might have a few issues connecting your abilities.

Your main mobility spell that also does some damage when colliding with enemies. The most common tripods will be things like Excellent Mobility, Nimble Movement and Chain Charge that all make you even more mobile

A burst of energy in front of you that deals huge damage before you slide backwards. Wide explosion, enhanced explosion and spectral explosion will give it some good AoE in front but still pack a major punch single target so you can kill bosses.

Throws your weapons forward and deals damage from range. This ability is great in chaos dungeons and raids, bleed effect, ranged attack are quite common – and encroachment release will make it consume shadowburst meter to deal even more damage.

Another ability that can consume meter to deal more damage. This is a combo skill that can be used three times, the first two are just damage and the third also knocks back. Weak point detection, wave attack and encroachment release are all good tripods to start with.

Can be a combo or normal skill that brings out a demon to hit the ground in front of you. It deals a lot of damage but can also knock enemies up too. If you want to go for big damage take vital point hit, fist of destruction and encroachment discharge.

Deals a huge amount of damage and fears enemies for 2 seconds around you. Quick prep, law of the jungle and mighty roar make this amazing for clearing big groups of enemies.

Unlocks at level 50 and swings your arms in front of you and deals a large amount of damage. Quick prep, encroachment discharge and cruel hand will make this annihilate enemies.

Unleashes a gate of hell, dealing massive aoe damage and fears them. It continues to do damage and then explodes at the end of the ability.

Sends you into the air and shoots a ray of energy at the floor dealing damage and eventually knocking enemies away.

Both of these abilities are considered viable though Fallen Ruin is harder to hit and can be wasted sometimes. Fallen Ruin is also only available to use in demon form so with a perfect suppression build you have no choice but to take Gate of Eruption. 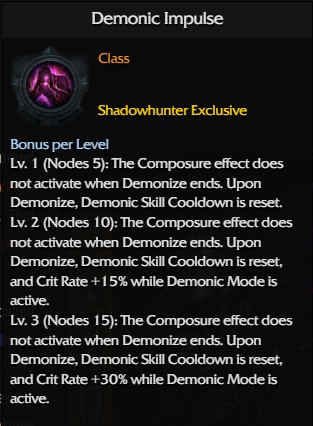 The first removes the composure debuff after leaving demon form so you can immediately start to fill it back up and get back to demon form.

This playstyle is great for players who enjoy the fantasy part of becoming a demon annihilating groups of enemies with powerful abilities.

You’ll want to pick mostly intrude skills so you can fill your shadowburst meter as quickly as possible – and you have tripods that can grant even more meter when you use them.

This is not the most optimal build to begin the game with but once you access higher tiers later in the game you will be able to have almost 100% uptime with the demon form.

You will want to try and go into the specialization stat as much as possible and use wealth runes where you can. Specialization keeps you in demon form longer, increases the damage of all your demon form skills and even grants more shadowburst meter from normal skills. 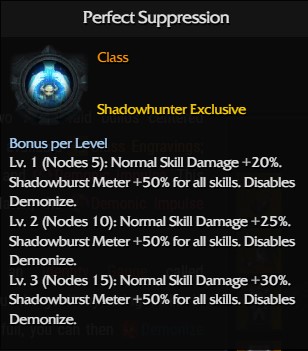 If you don’t fancy turning into a demon, your other option is perfect suppression that completely disables demon mode so you’re staying as a human all the time.

This playstyle is great for players that enjoy the human form and want to play around a dps rotation to bring it to its full potential.

Rather than specialization you’ll go for crit and swiftness as your main stats. This helps you with your movespeed and attack speed, as well as dealing big crit damage from your human form. 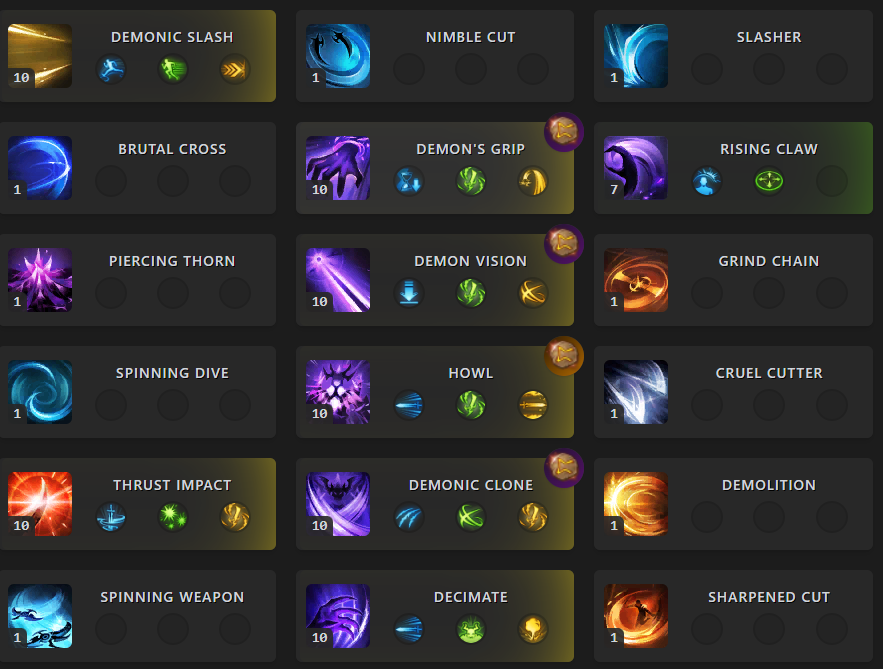 The Demonic Impulse build focuses on transforming into your demon form as quickly as possible.

Later in the game you can do this in one rotation of your abilities which means you’ll spend almost all of the fight using Demonic abilities.

You’ll always try to end with Howl and then use Blood Massacre and Leaping Blow as quickly as possible after transforming. 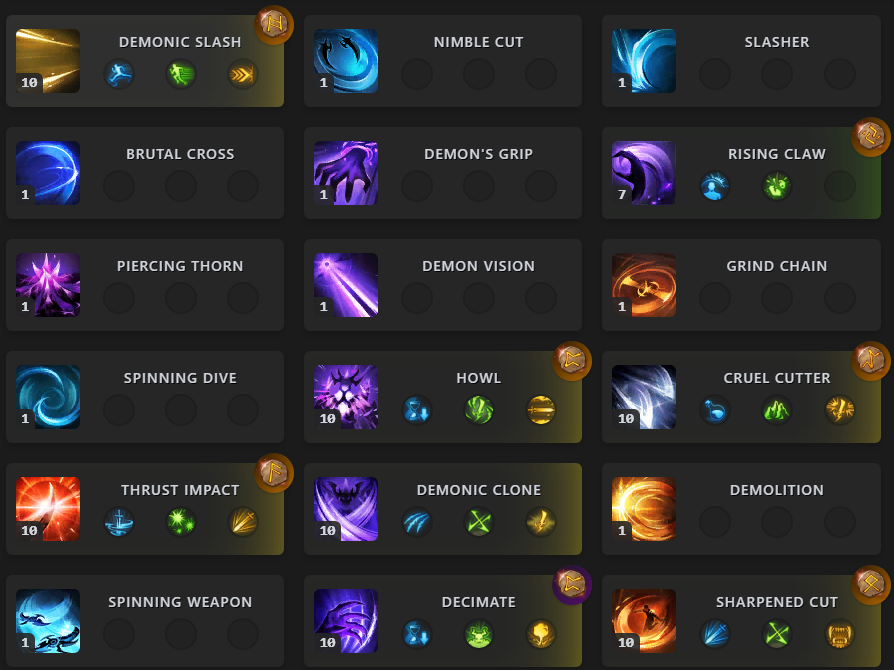 The perfect suppression build prevents you from transforming into a Demon but instead provides your normal abilities with bonus damage. You’ll be spending that shadowburst meter instead on empowering skills like Cruel Cutter and Demolition which deal much more damage than before.