For the third and final installment of this series, we’ve added our moon boy Aphelios into our expected Targon lineups.

With his assistance let’s meet our big boys.

Above the seven mana mark, these Celestials are looking to end the game and end it fast, and they do their jobs to a truly impressive degree.

You’ll most often find them showing up out of a Star Shaping or an Aurelion Sol, but occasionally Mountain Scryer, Traveler, or Leveled Zoe can get them to come play.

Throughout the article, we’ll be discussing these Invoke-heavy decks:

Let’s talk through what finishers to grab and when to wrap up this series, and hopefully, all of your games playing Invoke. 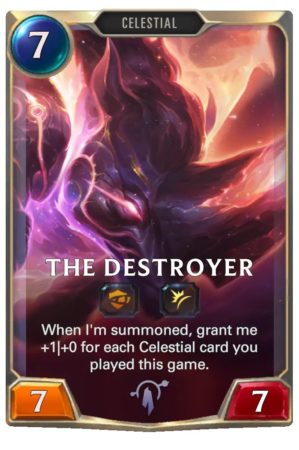 Coming in strong at the seven mana mark is the big boy of Overwhelm, The Destroyer himself looking to wreck some faces.

When you want it playing (Zoe or Aphelios)/Sol

This card is great with an active Plaza, killing whatever you want and pushing an awful lot of face damage.

That said, as your pick off of Aurelion Sol or Star Shaping it’s a bit underwhelming.

Pick it if you need a big unit and the others are AWOL, but you can usually do better.

Usually, when you drop a Star Shaping you’re going to want Great Beyond or Immortal Fire, but sometimes your opponent will be an Elusive deck and you’ve got to push that damage anyway and The Destroyer’s got your back.

Also, getting this guy down on turn six off of a Mountain Scryer can be monstrous, so look for those opportunities. 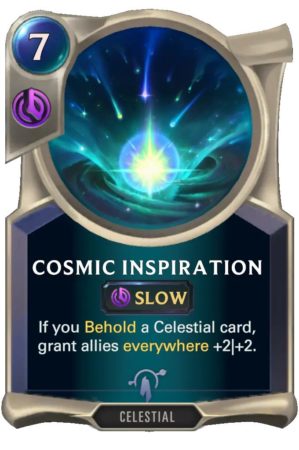 I hesitate to say actually never, but it’s going to be pretty close.

Occasionally you’ll take this off an Aurelion Sol to guarantee the Level Up but by then you’ve usually already won.

Mostly leave this behind and go for the big boys that help you close out the game faster.

Any time you can get this, especially off of a Mountain Scryer or Traveler, it will put you on a good course to winning a game.

As a deck with a lot of small creatures that flood the board, you are perfectly positioned to take advantage of this card. 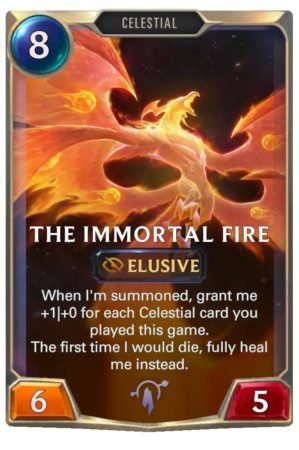 When one life just isn’t enough, sometimes you’ve got to come back around and make it work again.

Immortal Fire doesn’t go down easily and it absolutely refuses to stay there.

Sounds like a pretty good win condition to me.

This is the premier way to finish a game against Shadow Isles Control decks.

While they can freeze it nothing short of two tremendously inefficient hard removal spells will actually get it off the board.

Take this anytime you want an opponent dead and they don’t play Targon.

You’ll more often want great beyond, simply because it has a higher stat line. 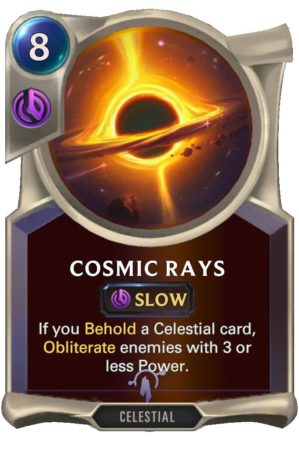 Oft overlooked to the detriment of the Invoke player and the opponent alike, let’s welcome the only mass removal spell on the Celestial lineup, Cosmic Rays.

This is a card that you will basically only ever take in extremely niche circumstances.

Otherwise, I’d suggest mostly passing this one by.

I really don’t want to say never, but with the rare exception of fighting an Anivia deck where you wouldn’t rather just try to kill them with a large unit, or a Tahm Kench/Soraka Match where your Meteors are missing, this just isn’t the right play. 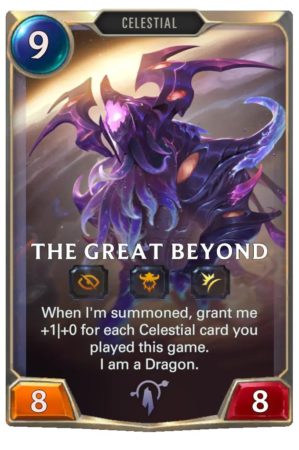 You know, there are all sorts of clever puns or greetings I could make here, but one stands head and wings above the rest. I-Am-A-Dragon.

Great Beyond is what you are looking for in Targon mirrors to break them wide open.

While it can occasionally get chumped, short of a Hush backed up by an additional large removal spell this is not a body that can just be ignored.

Any time you can get away with taking this card go for it.

If your curve and board state are looking ok and you think you can survive long enough to cast it then even take this off of Traveler or Mountain Scryer.

This is your go-to win condition in almost every match up so think hard before passing it by. 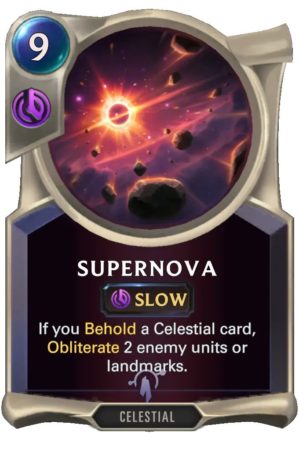 Meteor’s big brother heard there were not one but two units picking on you and is here to give them what for.

This is a good take if you can’t get Cosmic Rays and you need to blow up an Anivia.

It’s also great into Feel The Rush and ok in the mirror.

Usually, though you’d rather just close a game than answer your opponent’s threats, so only take this if you need it to survive.

Again, these giant spells are very rarely what you want.

They are not proactively attempting to close the game.

Turn nine to ten is your sweet spot, past that you start to lose some steam yourself.

Take this if you need it against Feel The Rush or in true desperation/when you’ve baited their counters against Lee Sin, but mostly leave it alone. 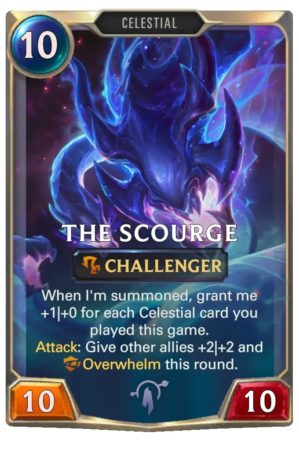 What has way too many heads and likes to push records for how much damage we can do in a competitive game? Let’s welcome the scourge to the celestial party.

Take Scourge with this deck when you can survive your opponent’s big swing turn just fine and are looking to put the lock on the game before they can draw out of it.

Be careful with this one because it commits you hard to winning when you drop it, but it will often do that job just fine.

This is much more of a desperation pick here.

You don’t present many big threats so you kind of have to expect your opponent to have an answer to mister no shield here.

But if they don’t you have a large enough board that failure to answer his question will usually result in a quick death. 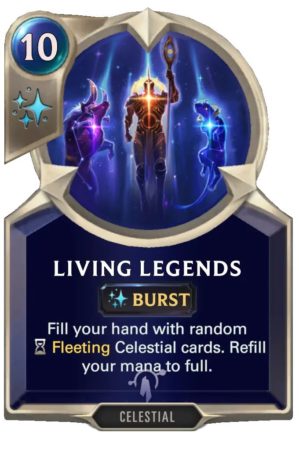 Finally, when one card just isn’t enough, let’s refill our hand and take a spin on the old roulette wheel of Living Legends.

This is going to be your go-to pick up off Aurelion Sol unless something else jumps out at you as being necessary.

It will be hard to end the game if he Levels and can find you the big boys you need to get that Level if you’re having a hard time. Take this card unless something amazing jumps out at you.

This deck can have some serious issues emptying its hand.

While playing this card with one or even two mountain scryers in play can be an absolute dream, getting the hand space for it to be useful can be difficult.

Take this card only if you have no other good options or are down under five cards in hand.