Hey, this is XxWhatAmIxX and this is Part 2 of 3 on how to pick cards from Invoke, covering the 4-6 mana cards.

To learn more about the 0-3 mana Invoke cards, revisit When To Choose Each LoR Invoke Card: Part 1.

We’ll be covering the strengths and weaknesses of each card and context in different deck examples.

Throughout the article, we’ll be discussing these Invoke-heavy decks:

Unlike Part 1, we’re going to be dropping the Lee/Zoe advice column.

This drop is because while that deck will occasionally nab one of these off a Leveled Zoe, most variations have no other way to acquire them and the situations don’t really come up often enough to be worth discussing.

These folks will most often show up from a day broken Solari Priestess, but can also be generated by Mountain Scryer, Moon Dreamer, a Leveled Zoe, or even our first showcase today, The Traveler herself.

Ascending the mountain to show us that change, diversity, and above all value are great things in our world, please welcome The Traveler to center stage. 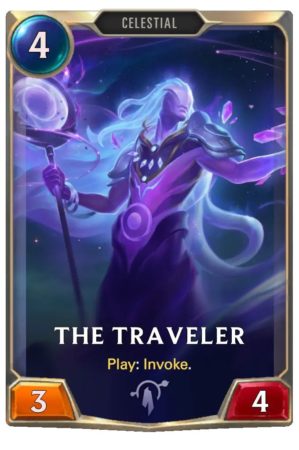 You’re usually going to want to look for higher impact plays off of your Solari Priestess in this deck because you are often swimming in value and your four drop slot really wants to be trying to get your tempo back.

That said, if your hand is ever looking a little clunky or bricked out, The Traveler is always going to be your go-to girl to get you out of that situation.

I can’t say “Always,” because that would make me a Sith, so I think we’ll go with “Any time you can get away with it.”

The Traveler sets up your Skies, clogs the board, grows your giant Celestials, and finds them when you need them.

Unless you are actively dying and need something to stop the bleeding, need something smaller to set up an earlier Skies Descend, or have already found your game-winning threat as one of the other two options, go for The Traveler.

Next in line we will be messing with the constellations to same the great and mighty Cth-, I mean, Aurelion Sol. Let’s look over Written In Stars. 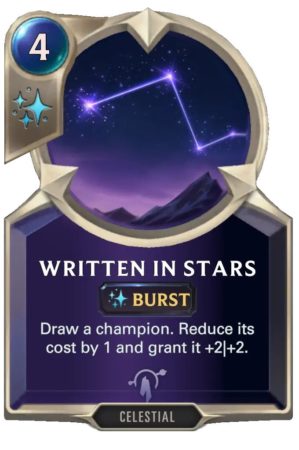 You’re basically only going to take this card when the board state is extremely mellow and you hope to set up an early Aurelion Sol for turn nine.

The only matchups this is really a good choice in are big Invoke Mirrors and occasionally Feel The Rush.

Four mana is almost always going to be too much to pay for this effect, but three mana, three mana might be ok.

You can occasionally take this if you have a Mountain Scryer to go get a one mana buffed Diana for a big removal spell, or a zero mana harder to clear Zoe.

I’d still be careful with this as taking non-creature Celestials makes Skies hard to cast, but it can occasionally be worthy of more consideration than it often gets.

Often referred to as “The Challenger,” or “That Five Mana Whatsit,” or “Dave,” let’s take a closer look at one of the more rarely taken Celestials, The Warrior. 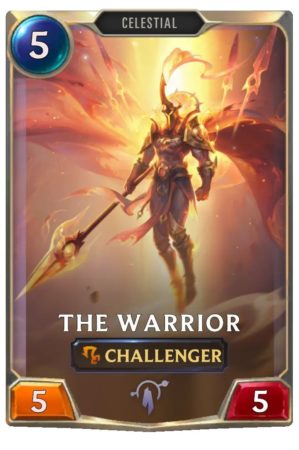 Oof, basically only take this card if you really need a creature to impact the board and have no other options.

You can also consider him when you are truly desperate for removal and lack a plaza, but think really carefully before you invest in something this fragile for your game plan.

This is going to read a lot like what I wrote above except that it’s ok to occasionally take him if you are looking to set up one good pull and then have him sit back for a turn or two to power a Skies Descend.

This is still most of the time not what you want, but every once in a while it’s what you need.

Sometimes you’ve just got to give ‘em the old one-two, the old whap-bam, the old four-one, the old Meteor Shower. 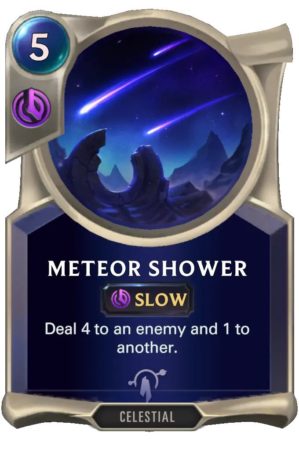 There are usually going to be better options, but this is your desperation removal play that you go to half a step before Challenger.

No Plaza, no Concerted Strike, Single Combat too risky, and that scary thing over there has got to go? Well, we do what we have to.

I’m going to keep bringing this up because it is very important for this deck.

Think twice or three times before you take a non-creature Invoke card.

If you have to do it to slow your opponent down because they’re just going to kill you, you do it.

It’s just important to make sure you’re not sacrificing your later win conditions unnecessarily for what looks like a juicy trade right now.

Aggro hates to see them, control doesn’t know what to do about them, and anytime they show up to cheerlead for us we love it. Golden Sisters come on down. 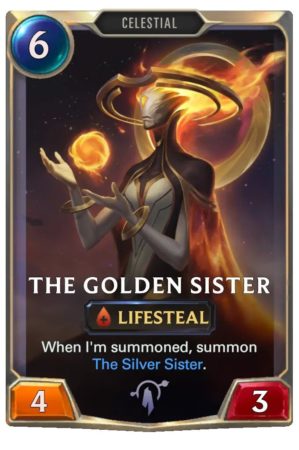 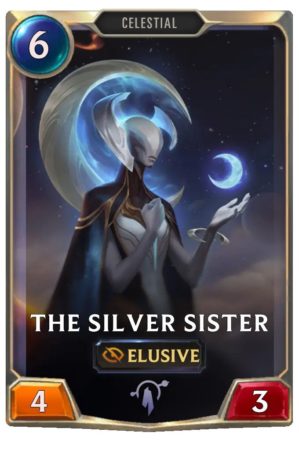 This card does well enough on its own and is an absolute game-breaker with a Plaza empowered attack token.

Two good trades and five points of life gain? Sign me up.

Sisters are probably the default card you want off of your Solari Priestess in this deck.

Unless something more important puts in an appearance, let Sister-Sister here swing the game for you.

Sisters are still very good, but a little less ubiquitous here because there are so many other good options and we don’t have Plaza to back them up.

They’re still a very good choice for board stabilization or to set up our skies, but depending on our hand state lower mana cost units, necessary removal spells, or the value of The Traveler may quite often jump ahead of the Sisters in our considerations.

Sometimes you just see a card on the table and think to yourself @#$*! that whatsit in particular. And when that’s the thing to do falling comet is the only celestial to turn to. 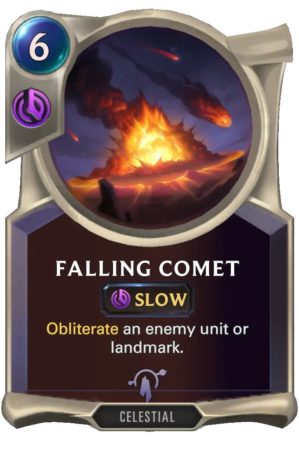 You’ll most often want this in the mirror to team up with a Spellshield breaker to kill an Aurelion Sol.

It can also do good things against the Feel the Rush matchup, and take out pesky Landmarks ala Hexcore or Star Spring.

I wouldn’t take this card unless you have a specific plan for it though, as it’s easy to have it clog your hand.

You’ll usually only want to go for Comet if you are already feeling pretty in control of the game and want to make sure your opponent can’t take it back, or if there’s a Landmark that just has to die *cough* Star Spring *cough*.

While this is probably the most often taken non-creature I will still continue to caution how frequently such things get chosen in a deck trying to Descend some Skies.