Let’s do a deep-dive into the Invoke mechanic, its power, its strengths and weaknesses, and its current place in the metagame.

Throughout the article, we’ll be discussing these cards in the context of these Invoke-heavy decks:

This will be a three-part series that’s organized by mana cost.

In Part 1, we’re covering the Invoke cards that cost 0 to 3 mana. Keep an eye out for Parts 2 and 3 in the near future.

Hold tight to your danger-noodles because here we go!

First off, welcome the man, the myth, the legend, the one, and only Serpent. You can’t ask for too much for zero mana, but oh boy does this little noodle deliver 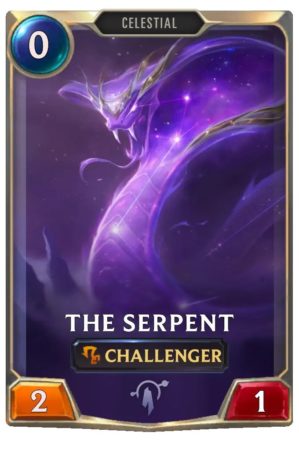 While most of the time you are looking for spells to work on your Lee Sin win condition, there are exceptions to every rule.

Serpent is a great pickup when facing down an opposing Zoe, a Twisted Fate that is threatening a level, or just a board of aggressive units wider than you are really comfortable with.

This is one of your favorite friends when running this list.

He trades when you need it, he sets up Skies Descend, he triggers your dragons and your Nightfall and stalls out the board while growing the big Celestials you want to win with, and he does it all for the perfect mana cost.

The only time you don’t want to take this card is if you need another option to fill a hole in your curve, answer a specific threat, or try to win the game.

When in doubt, take the snake.

While Mr. Noodle can still do his thing here he’s not in the highest of demand simply because you will often have Plaza out to give you the Challengers you need to stabilize the board.

Look for him when you seriously need the tempo boost or are missing your Plaza, but generally, see if you can do better.

Next, we have the oft-overlooked Moonsilver. They say it’s always the quiet ones and this is no exception, let’s see what they’ve got. 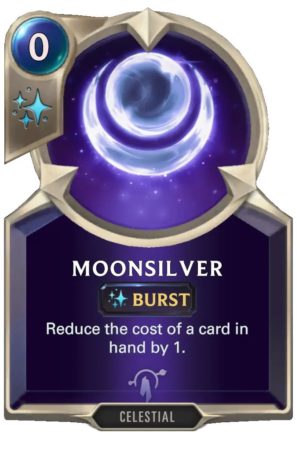 There will be plenty of specific moments when another card is even more necessary to the given board state, but when in doubt this is your pick.

It triggers Lee and helps your tempo problems, which is everything this deck could ever ask.

This card can be good early to get an Eclipse Dragon online a turn earlier, or a good choice late when you already have all the value you’ll need to wrap up the game and you want to do something sneaky.

But be careful choosing it in this deck. You’re very reliant on your Invokes for actual value and you won’t get that here.

While you can occasionally use this card to get in a sneaky fast or burst spell your opponent isn’t expecting, or drop an A-sol on nine when Eclipse Dragon is AWOL, most of the time you can do better.

Mostly this will only get taken when you’ve got no better options.

Weighing in next at 1 mana is the little brother of the Overwhelming Celestial duo, The Charger. Run it down, little buddy! 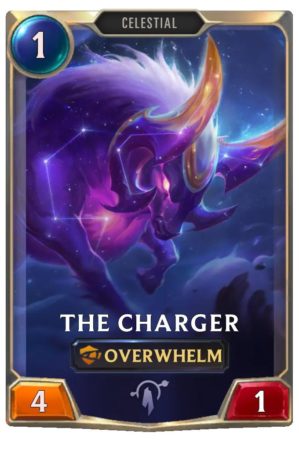 Again, taking units here is rarely what you want, but every once in a while you’ll need to stop a flow of Fearsome attackers or decide it’s your turn to SMOrc it up, and then this is the card for the job.

You’ll most often take this card when you are tight on mana and looking to set up a big Descend. Take him every once in a while to get aggressive early, but always think through your opponent’s potential responses to that line before you do.

If you give Charger a Plaza to play with it is suddenly happy to be taken quite often.

Grab this when you have Plaza for a great piece of removal, or later to level A-sol. 1 mana is a great price for a 5|2 Challenger Overwhelm.

Here we have possibly the most hated one of all the Invokes. Welcome crazy Hypno-deer itself, AKA Celestial fun police. 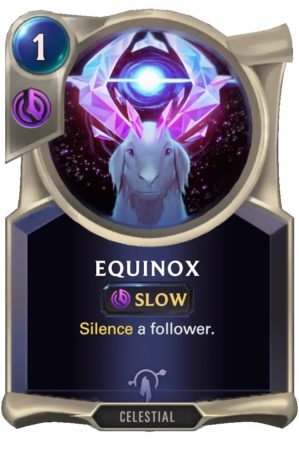 This is a great one later if you are scared of getting locked down by a Leviathan or big dragon, and great early to protect a Zoe from a Plaza or stop an incoming bombardment.

Even better it triggers Lee. You still need some sort of plan, but take this one early and often.

You really do have to be careful taking non-creatures as your Invokes in this deck. Think long and hard about how important it is to answer what you are planning to answer, and if your curve is going to be alright before you make this choice.

Most of the things this card answers can be answered better by other cards, and as a plaza deck you often just want more creatures. Unless you have a specific and necessary use in mind for this card I would probably skip it.

Beware the Barkus! Everyone’s favorite pupper is here to play! How do his skills measure up? 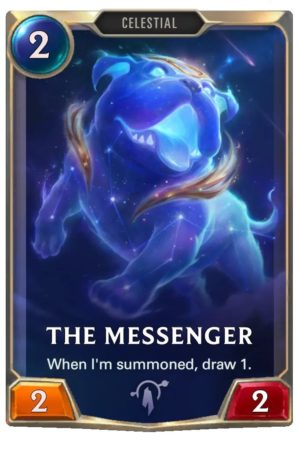 This is actually one of the creatures to seriously consider taking.

If you have holes in your early curve, need a specific answer, or even are just missing lee-sin, The Messenger does a great job of standing in for a missing mountain goat and drawing you closer to the matchup breaking cards you need.

Messenger is the perfect slot in here. It cheapens Descend, draws you answers, and clogs the board.

It plays a key role in any of the myriad of game plans this deck can be on.

Unless there is a very compelling reason to take another card, The Messenger is where you want to be.

Any time you think you’ll have a spare two creature mana it’s worth taking messenger to keep yourself on the curve and the board full.

Usually, you’ll look to drop this with another two drops on a turn four or with a four drop on a turn six. Try to have a plan for his timing before you choose him.

Forgotten an unfortunate amount of the time, but waiting in the wings to cause some really nasty swings, Moon Glow, come on down! 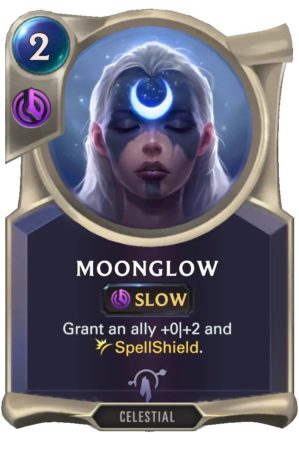 This is the best home for this card because you can back it up with faster spells.

Getting this on a Zoe, Lee, or even Sparklefly can make finding a path to victory very hard for your opponent.

Grab this any time you think you can make it stick.

It’s a spell, and it’s a Slow spell that gives your opponent counterplay at that.

Take this when your opponent has no possible responses or all other options have failed you.

Occasionally okay off of Scryer because then it only costs 1 mana.

This deck is incredibly mana hungry and is going to have better options and better things to do 90+% of the time.

Take it only when your opponent can’t respond and you think that spell-shielding your Zoe will let her level and win the game.

The low end of the Elusive Celestial curve. How well does this curious little ferret pull his weight? 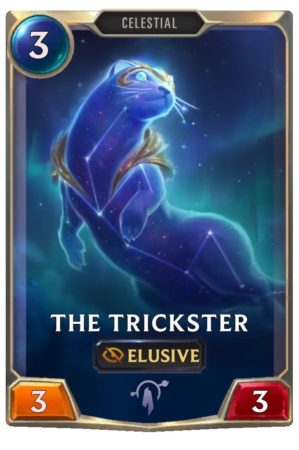 You’ll take this card when you need a curve filling blocker, or when you are doing your best imitation of an Elusive aggro deck.

You won’t really want to, but you’ll realize it’s the best you can really do.

Ferret can be a mid-mana Elusive for setting up a descend a few turns in the future, and can sometimes create or relieve some pressure.

Take Trickster when you need a creature and are not being offered anything else that fits your curve.

You really, really don’t want to be paying three mana for a creature given the way this deck’s curve tries to work itself out.

If you’ve got no better options and need a body then sometimes ferret is your boy, but in general, try to stay away.

Possibly the most tilting of the early Celestials is here to wrap up this segment. Just like it has wrapped up the hopes and dreams of so many attacking creatures. 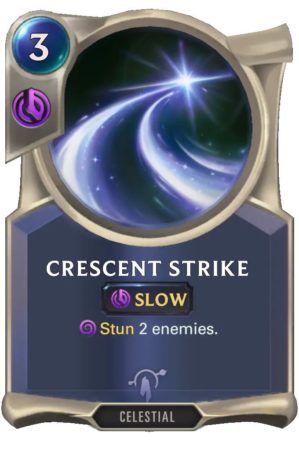 This deck just wants to stall out and kill you with a leveled champion or a large butterfly.

It can afford to sacrifice long term tempo and even card advantage for the short term gains necessary to do that.

Take this card relatively often to help you stay alive for your combo kill finishes.

I would only take this card in the most desperate of circumstances against an aggressive deck, or if I already have the game sewn up and need to make sure I can survive a Feel the Rush or a Harrowing.

Maybe very rarely to push through a lethal attack. Usually not what you’re looking for.

As I’ve mentioned many times this deck is extremely mana hungry.

Looking for three mana you don’t want to use for something else is a tough ask.

Take this if you absolutely need to survive a little bit longer to get your big heals and stabilization tools online.