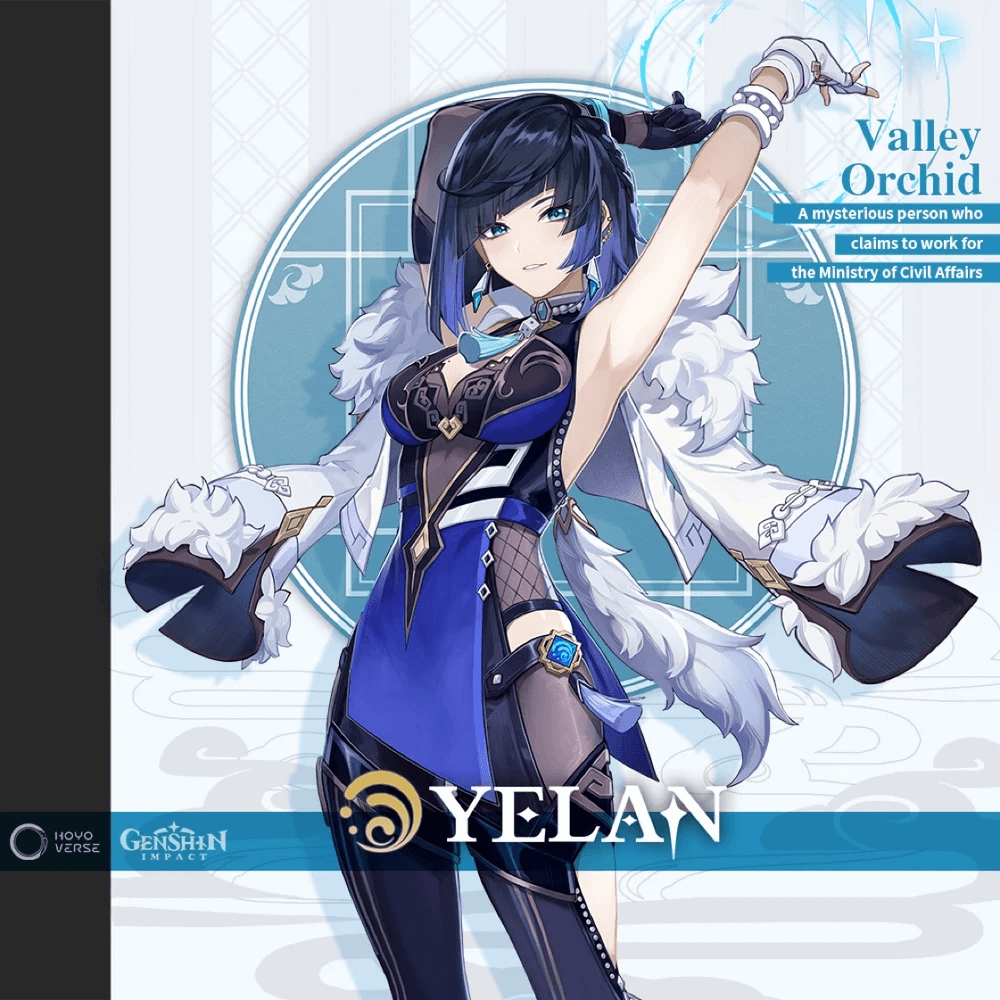 Yelan is a Hydro Bow user that released in update 2.7.

She bears a lot of similarities to Xingqiu, one of the best units in the game. While she may not outperform Xingqiu, she does provide a unique experience when combined with him.

We currently have her ranked as S on our Genshin Impact tier list.

In this article, I’ll be going over everything you need to know about Yelan, including her playstyle, best artifacts, weapons, teams, and more.

Like most characters, Yelan has a normal attack, charged attack, and a plunging attack. As with all bow users, her Charged Shot will deal Hydro damage.

Her unique ability is with her breakthrough, which activates after 5 seconds out of combat. This will decrease her next Charged Attack time by 80%, and will fire a “Breakthrough Barb,” which deals AoE Hydro damage based on Yelan’s HP.

Yelan’s skill isn’t anything crazy. You can dash through enemies, marking them and dealing damage. If you hold the skill, you can dash around for longer and mark more enemies.

As with many skills, this will mainly be for some extra damage, but mainly for particle generation.

Yelan’s Burst is what makes her a great support. Like Xinqiu, it is an off-field Hydro applicator that deals Hydro damage when your active character Normal Attacks.

This off-field application is what makes Xingqiu and Yelan very powerful supports, enabling any reaction that pairs with Hydro.

As with many characters, Yelan’s Burst is her main source of damage and value. Her skill can be increased as well for some extra damage. Lastly, her Normal Attack is not needed when using Yelan as a support. If you want to build Yelan for damage and shoot enemies with a lot of Breakthrough Barbs, you can level up her Normal Attack.

Yelan doesn’t necessarily have many combos as her role in a team is quite simple. You just need to swap to her, cast her Burst and Skill, and then you can switch to other characters. If you want, you can fire a Breakthrough Barb after her Burst and Skill to deal some extra damage before switching off.

As you ascend Yelan, she will gain Crit Rate.

Since all of Yelan’s abilities scale off HP, this is a nice bonus to give Yelan some more damage. However, it’s not something you want to always build around. Having duplicate elemental types is fine, this is just a nice bonus.

Adapt With Ease: So long as an Exquisite Throw is in play, your own active character deals 1% more DMG. This increases by a further 3.5% DMG every second. The maximum increase to DMG dealt is 50%. The pre-existing effect will be dispelled if Depth-Clarion Dice is recast during its duration.

This Ascension is a very powerful buff to give to your active character. After you cast your Burst on Yelan, you likely will be switching to other DPS characters, and this will give them more damage as time passes.

This will reset every cast, but it’s still a solid buff to have. DMG% buffs are very powerful as they scale with other things like Crit and ATK.

Necessary Calculation: Gains 25% more rewards when dispatched on a Liyue Expedition for 20 hours. 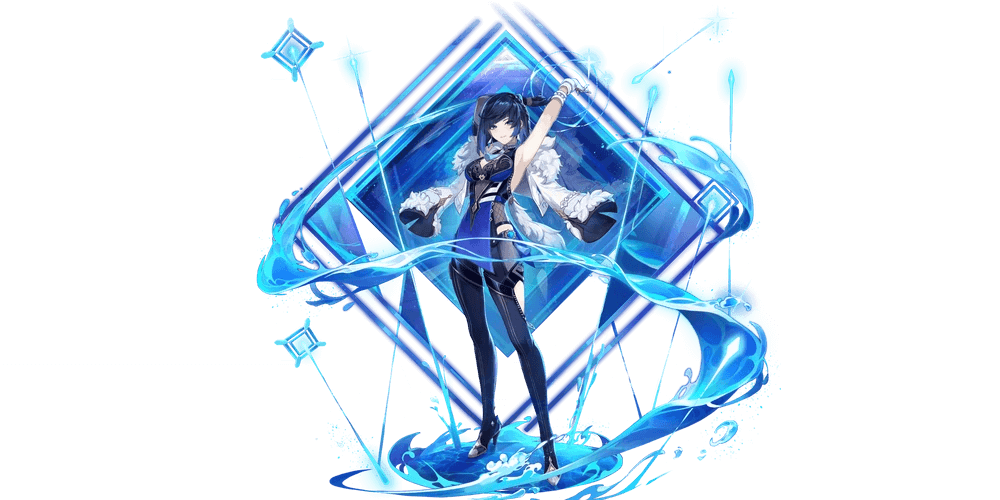 As always, 5-star characters never need constellations, but this section is to review how valuable each one is. Yelan has fairly good early constellations, followed by lackluster ones, and ends with a very powerful 6th constellation.

Yelan’s 6th constellation has been used in many showcases to absolutely melt bosses. It can be just a powerful damage bonus, or you can build around it for some fun burst shenanigans.

When Exquisite Throw conducts a coordinated attack, it will fire an additional water arrow that will deal 14% of Yelan’s Max HP as Hydro DMG.

Increases the Level of Depth-Clarion Dice by 3.
Maximum upgrade level is 15.

Increases all party members’ Max HP by 10% for 25s for every opponent marked by Lifeline when the Lifeline explodes. A maximum increase of 40% Max HP can be attained in this manner.

Increases the Level of Lingering Lifeline by 3.
Maximum upgrade level is 15.

The Mastermind state lasts 20s and will be cleared after Yelan fires 5 arrows.

Like Xingqiu, Yelan’s playstyle is to be mainly a support Hydro unit. This means you won’t be using her on-field for too long.

Yelan shines most in team comps that want Hydro application, so things like Electrocharged (taser teams) and Freeze teams are two strong examples. There has been testing done already with Vaporize and Hu Tao, but Yelan seems to be less consistent than Xingqiu in these situations.

Yelan’s biggest draw is to pair her alongside Xingqiu for an insane amount of Hydro application. Them both being Hydro also allow the two to provide energy for each other, allowing you to use weapons and artifacts with less ER and more damage.

The best set for Yelan will mainly be the 4-piece Emblem of Severed Fate. The Energy Recharge and Burst damage are both great stats to have for Yelan. This set is also the best general use set for Xingqiu, so there’s no surprise here.

Other Sets to Mix and Match

If you don’t have enough pieces for 4-piece Emblem of Severed Fate, you can mix and match with other sets like:

This is a consideration to have if you have good substats on some pieces here and there, but not a good 4-piece Emblem of Severed Fate.

Yelan is unique in that you don’t necessarily need to go crazy into Crit stats to do good damage. The HP scaling on her damage is quite strong, making her a simpler character to invest into early on.

Energy Recharge is important to be able to burst off cooldown. Crit substats and HP are all strong substats to have for Yelan, and the specifics for which is better depends heavily on your stats as a whole. You can use a DPS calculator to optimize, or just try to have all three stats as high as you can.

Lastly, Flat HP is the last consideration, as things like ATK and ATK% don’t do much for Yelan.

A solid amount of ER to have for Yelan is 220%. Depending on the specific teams you are running, you can get away with less, or you may need more, but this is a general baseline to try and hit.

Here’s a quick rundown of the best 5-star weapons for Yelan. We don’t recommend too many, as a 4-star weapon is already one of her best weapons.

This new bow is an absolute monster when it comes to stats and damage. It has a strong Crit DMG substat, increases HP, and further increases DMG% with the passive. This bow will be a top contender for any Bow character.

Elegy for the End

This bow is a strong bow that may deal more damage for the overall team as it buffs the entire teams damage through Elemental Mastery and ATK%. If you are using a reaction based team (like many teams do), you will also get great results out of this bow. This will also likely surpass Aqua Simulacra on said reaction based teams.

This bow is rewarded early on in the story of the game, so every character should have access to this bow. Overall, this weapon is the best 4-star option for Yelan. It provides Energy Recharge, and the passive will also help generate energy, allowing you to run less ER substats, and more damage substats.

Lastly for our guide, I’m going to go over how to build the best Yelan teams.

Before we get into the the juicy teams, let’s start of by saying that Yelan can basically replace any Hydro unit on any team that’s already been made.

All of these teams that have run units like Xingqiu, Mona, Kokomi, etc, are all interchangeable with Yelan. Yelan may not perform better than other Hydro units in every situation, but she is still strong, if not, just as good.

Let’s get into the best part about Yelan, and that’s running double Hydro along with Xingqiu. With Yelan and Xingqiu, you are able to apply so much Hydro, that you can essentially run any Pyro unit to dish out incredible Vaporize damage. You can even run double Pyro alongside double Hydro.

This is a strong example that many are using to showcase the power of Double Hydro. Usually, Hu Tao and Xiangling apply too much Pyro and overtake any Hydro application from Xingqiu. Now that Yelan is in the mix, you are able to Vaporize all of the important ticks of Pyro damage, resulting in what may be Hu Tao’s best team now.

This Double Hydro core of Yelan and Xinqiu are powerful enough to basically be paired with any Pyro unit along with any flexible 4th unit.

While you don’t necessarily need to run a Pyro unit in a Double Hydro team, it will be one of the best considerations to make the best use of all the Hydro. You can also run things like an Electro character over Pyro, and that will also make good use of the Hydro application.

In a team like this, you have plenty of options for a 4th unit. You can run another Pyro character, a Anemo character like Kazuha or Venti for swirl, a utility character like Zhongli, or just about anyone you want and still do well. 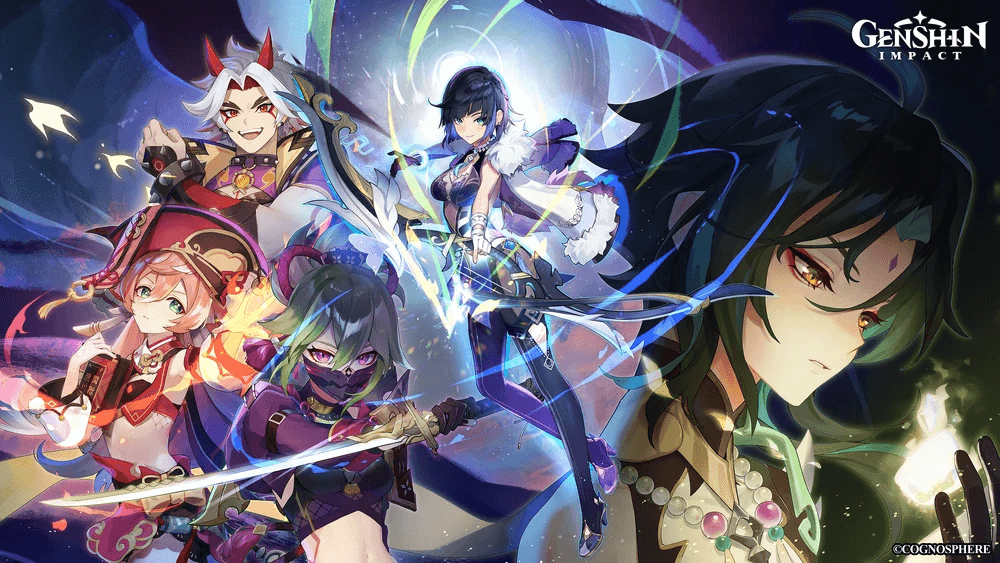 This wraps up just about everything you need to know to play and build Yelan. Are there other details or things you can learn, of course. This guide is simply meant to cover the essentials.

Many players thought Yelan would powercreep or replace Xingqiu, but now we understand that she actually works best alongside him. The two of them open up new team combinations and work in tandem.

If you are interested in a strong Hydro support that can fit in a multitude of situations, Xingqiu already fits the bill. If you want to try the double Hydro teams and want to Vaporize nonstop, Yelan is for you.