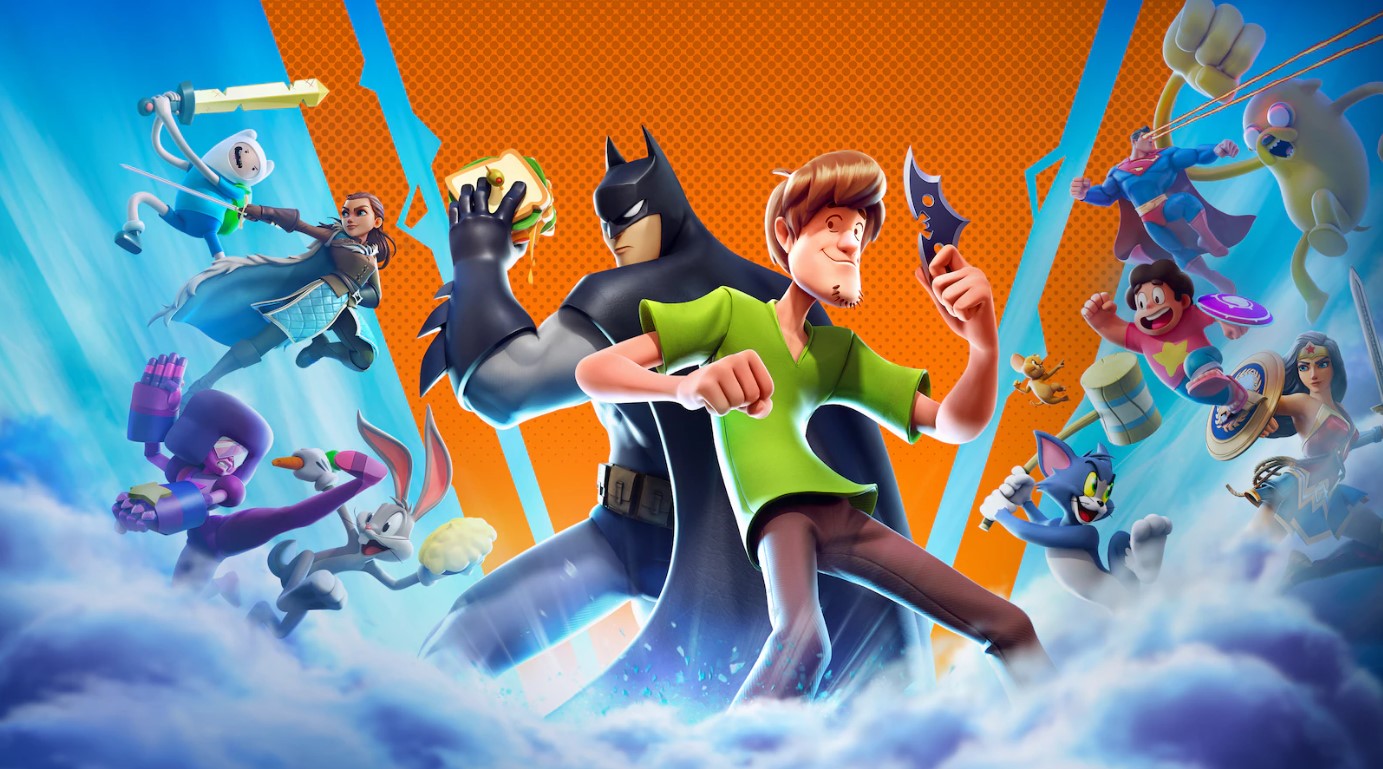 Welcome to our Multiversus tier list! If you’re looking for the best characters, you’ve come to the right place.

Even though Season 1 still doesn’t have Ranked out yet (Tony pls), metas have been forming since the game’s alpha.

This list takes into account both 2v2 and 1v1, but weighs 2v2 slightly more due to it being the main mode that the game is built around.

Here are our rankings for the best Multiversus characters for 1v1 and 2v2:

Below, you’ll find an infographic version of our Multiversus tier list that includes more details like our difficulty ratings (for beginners trying to learn a character). 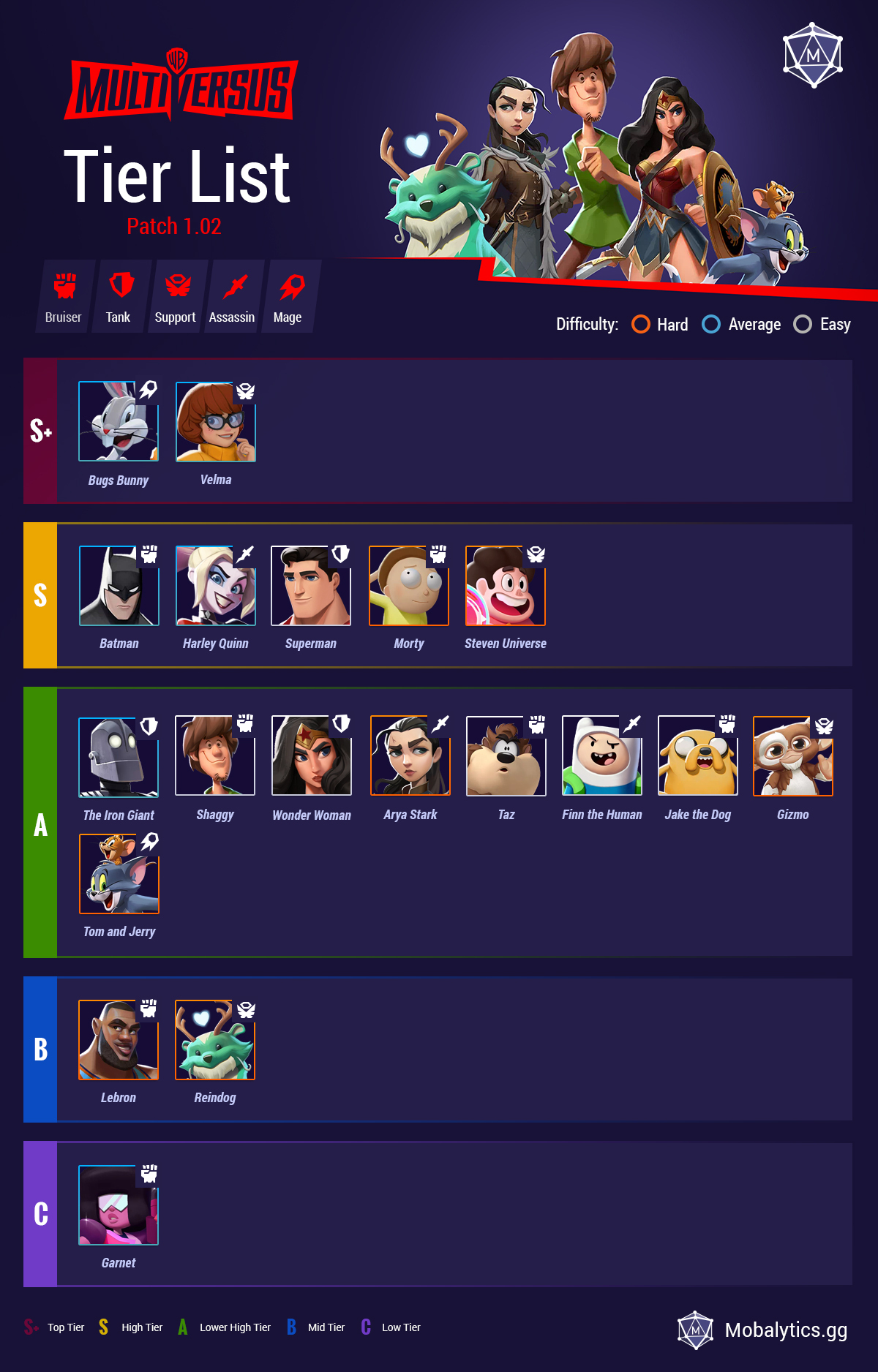 One thing we want to mention at this point is that, Multiversus is pretty damn balanced overall. The difference between adjacent rankings (like S and A) are very close and nearly interchangeable in some cases.

Basically every character has players out there making them work at a high level, so we recommend prioritizing characters that synergize with your playstyle and are most of all, fun for you to learn and play.

Another note is that Multiversus is still very new and the meta is likely to change quickly as characters are further developed. Players are bound to find new rune builds, improved matchup counterplay, and of course, character tech, that will cause rankings to rise and fall.

After a series of balance changes, Bugs Bunny still has a strong argument for being the best character in Mulstiversus, but he’s definitely not the unanimous choice anymore.

He is now alongside his often partner in crime (or anti-crime?) Velma, in S+ tier. Velma has proven to still be a strong competitive mainstay despite her own balance changes.

The two characters fit into any comp and are comfortable in almost all matchups.

Harley Quinn has seen improvement after improvement in balance changes and as players have optimized her kit, she has continued to climb.

After a round of massive buffs and dedicated players, Morty has made a massive jump to S if you’re able to handle his unorthodox playstyle.

Gizmo has debuted in A-tier with a well-blessed kit that offers a ton of utility, poke/burst damage, and consistent options.

He is very good in 2v2 but slightly worse in 1v1, so we’ll be keeping an eye on him for now before considering moving him anywhere else.

After a massive spike of success followed by a round of buffs, The Iron Giant has settled here in a spot that most players are pretty happy with.

The other curve ball is Taz’s awaited return after receiving some helpful buffs. It was rough for a long while but now you don’t have to feel embarrassed to pick him anymore, far from it.

Tom and Jerry got hit hard so they’ve fallen to A-tier for now. Expect them to bounce back after more adjustments since they went a little overboard with the nerfs.

Lebron has been definitely getting better as his players optimize his moveset but he’s still a cut below a lot of characters. Meanwhile, Reindog, although still offering a ton of potential, just isn’t represented by that many great players. We’ve dropped him down for now but he’s still pretty good if you’re committed to him.

Lastly, Garnet is unfortunately the worst character in the game. She’s just worst compared to other bruisers and as other characters have developed, she’s mostly stayed stagnant.

Her players were anticipating the round of buffs she received but they just fell flat in terms of providing any semblance of significant impact.

Lastly, we want to explain our difficulty ratings. Note that these are more meant for Multiversus players who are new to the platform fighting genre.

If you’re a veteran of Smash, Brawlhalla, or Nick All-Star Brawl, you’ll likely find it pretty easy to pick up any character.

These characters have kits that are very intuitive with few surprises. That doesn’t mean they don’t have depth, but they are very simply designed and easy to pick up the first time you play them.

Average characters are still pretty easy to pick up and play, but tend to have more ability cooldowns to manage or other unique gameplay aspects that require a bit more understanding than their Easy counterparts. You should get the hang of them after several matches.

New players will likely find Hard characters to feel a bit unwieldy at first but typically, we think that they’ll make sense after 8-10 games. Make sure to read the nuances of their move lists!

Thanks for reading! Be sure to check back, especially around new patches, for updated rankings for the best Multiversus characters.