According to Avalanche Software, the creators of Hogwarts Legacy, the game will include dozens of spells that will be used in a wide range of situations from attacking and protecting yourself in combat to solving puzzles and exploring the world itself.

Although the game releases on February 10, 2023, there has been a good amount of footage that has been shown off by the developers that have revealed how spells will work.

In this article, we’ve collected all the spells that have been confirmed as usable within the footage shown so far and have ranked them based on the available information that has been revealed thus far.

Here are our rankings for the best Hogwarts Legacy spells:

In addition, we also have an infographic version: 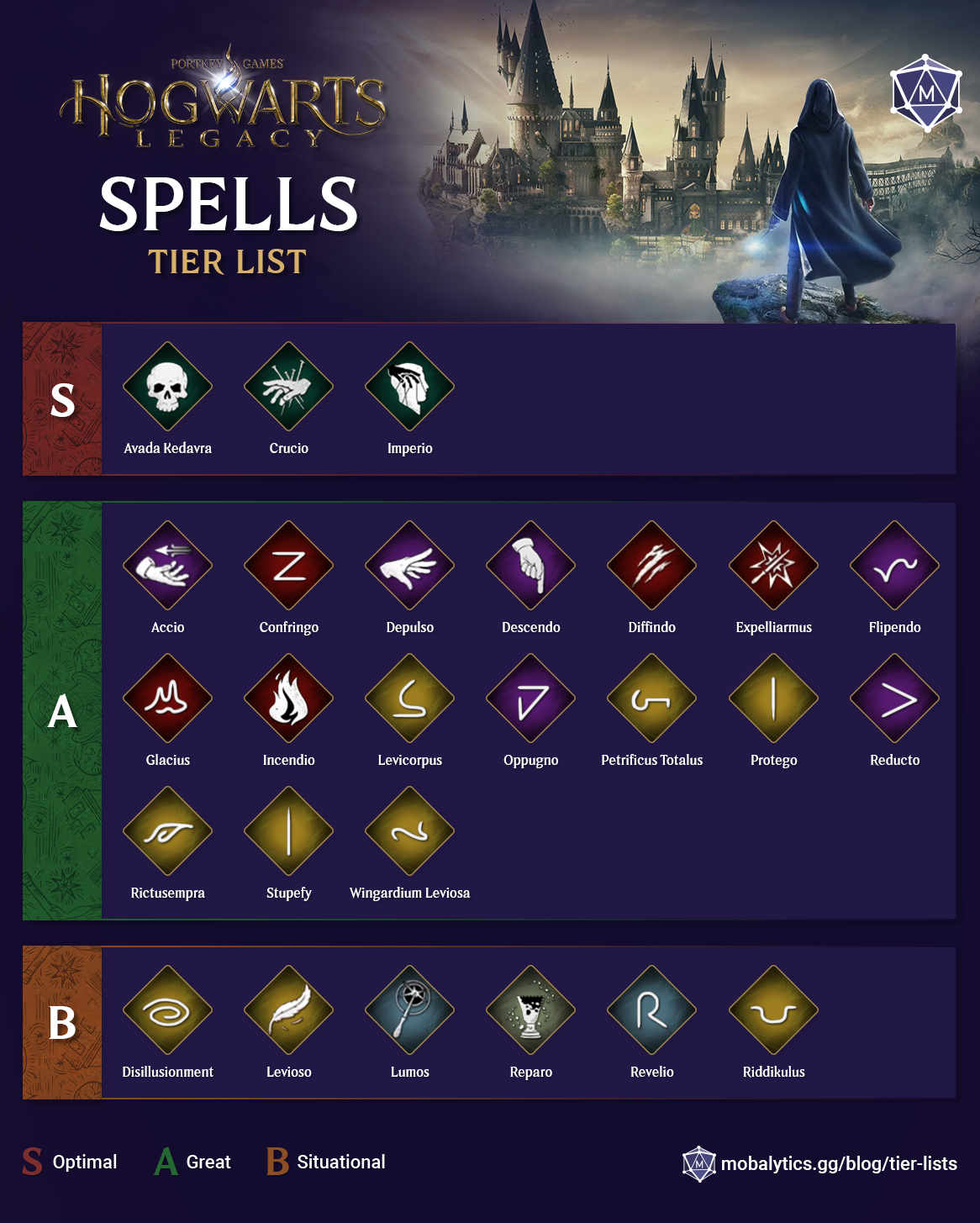 We will of course update these rankings ASAP when the game is released and as more spells are unveiled between now and release date.

Below, we’ll cover all the known spells that have been revealed so far with commentary on how useful each one appears to be.

To see the spells in action, check out the Gameplays Showcase below along with the previous showcases by the Hogwarts Legacy team.

The S-tier spells feature none other than the three infamous Unforgiveable Curses. Usually, these spells have a downside of being illegal and potentially harmful to the soul of the caster, however, based on gameplay demonstrations, it seems that the only current downside is longer cooldowns between casts.

Because of their incredible power and impact and the current lack of in-game consequences for casting them, it seems that optimal rotations will rely on how you sequence your spells between the curses while they’re on cooldown.

It’s OP in the books and films, so naturally, Avada Kedavra is a strong contender for one of the best, if not the best spell in the game.

We have to see if there are any other limitations besides a long cooldown, and you probably won’t be able to use it on major bosses, but so far we’ve seen it be used to kill mountain trolls with a ton of HP.

Last but not least for our current list of potential S-tier spells is Imperio, which forces enemies to fight on your side. This will likely be the best crowd control spell in the game since it not only removes a threat, but also helps kill your enemies simultaneously.

These spells will be your bread-and-butter, meaning you’ll be casting some combination of them based on the situation at hand. Since they have shorter cooldowns than the Unforgiveable Curses, you’ll likely be casting many of these the most.

Accio allows you to pull (or “summon”) an item toward you. This will be useful not only outside of combat, but we’ve seen it be used to pull terrain and objects to be thrown away from you with Depulso.

Confringo, a blasting curse, causes a target to explode. This will make it a good AoE (area-of-effect) finisher to kill off multiple low health targets.

While Accio pulls an item to you, Depulso provides the opposite function of being able to push it away from you. This will have similar value to its counterpart both in and out of battle.

Descendo allows you to pull a target downward. In the books and films, this was mostly used on objects but appears to be usable on enemies in Hogwarts Legacy. This may be a great tool against flying enemies or ones that are abusing high ground.

Casting Diffindo allows you to cut and slice at a target. With a wide range of creatures and enemies, there will likely be weaknesses and resistances based on damage types like slashing and blunt force. The spell may also have some utility outside of combat for cutting rope and things of that nature.

Expelliarmus is a classic defensive spell that disarms an opponent, usually by removing their wand or other weapon being held. In Hogwarts Legacy, since there are cooldowns, understanding which target to disarm against multiple opponents will be a key decision.

While Depulso also sends an object away from you, Flipendo, as a jinx rather than a charm, will do a similar effect but in a more forceful/offensive fashion. It also has a disorienting effect in the books/films so there may be an additional crowd control component to it in-game.

Glacius will likely be a very useful spell in general. In battle, you’ll be able to use it to deal ice damage and slow enemies. Outside of battle, it will have uses like putting out fires or perhaps creating terrain to help you navigate similar to Link’s power in Breath of the Wild.

Similar to its elemental counterpart, Glacius which freezes, Incendio, which conjures fire, will also be a versatile option. In combat, it will likely be used to deal fire damage and perhaps DOT (damage-over-time). If it follows classic video game conventions, there will probably be explodable barrels/chemicals at some point to deal environmental damage.

Outside of combat, it will likely be used for exploration, solving fire-related puzzles, and melting ice.

Levicorpus, also known as the “Dangling Jinx”, basically grabs an enemy by their ankles and flips them upside down, holding them in place. If enemies can’t cast spells or otherwise attack while they’re held, it will be a useful crowd-control option.

Oppugno is definitely an interesting spell and has seen a variety of uses in the books/films. Basically, it can conjure objects or creatures and launch  them at a target. In the case of cojured creatures, we’ve seen Hermione create birds to attack Ron with Oppugno.

This curse, famously used against Nevile Longbottom, causes temporary paralysis against an enemy. This will be yet another crowd control option and perhaps may be used to incapacitate enemies you may not want to kill (just speculating there could be cases where a capture would be more appropriate for a task).

Protego generates a reactive shield that deflects spells (not all of them) and blocks physical damage. Along with Expelliarmus, this will likely be one of the most used defensive spells in Hogwarts Legacy.

Reducto is a spell used to break down or blast solid objects into pieces. If this spell can be used in combat to break weapons or objects being thrown at you, it will be A-tier. However, if it is just used to destroy environmental barriers and obstacles outside of combat, we’ll drop it down to B-tier.

Rictusempra is kind of a memey spell at first glance but may prove to be quite useful. Its effect causes an enemy to be overcome with a fit of laughter. This is another obvious crowd control effect but may be additionally useful against spells that require a vocal component – since a target is laughing, they may be rendered unable to counter the spell until its completion.

Stupefy, which allows its caster to stun opponents, offers value both on offense and defense. For example, you can use it to disrupt an enemy who is about to attack you, or use it in a combo string to set up massive damage with other spells.

Wingardium Leviosa traditionally lifts objects or small creatures into the air, but may have additional utility against opponents who are wearing clothes since you can target those instead. This is yet again another crowd control option but may be a great set up for a slam with Descendo.

This batch of spells are ranked as B-tier because they are the most situational spells in Hogwarts Legacy. They may be very powerful in certain instances, but for the most part, they will likely be the spells you’ll cast the least.

The Disillusionment Charm allows its caster to disguise themselves as their surroundings, effectively becoming like a Chamelon or Predator.

This has an argument for A-tier if you can use it to engage sneak attacks or being able to cast in battle to disengage from combat safely. However, if it is purely just for out of combat sneaking.

Levioso is another spell, like Wingardium Leviosa, that causes an object to levitate. However, it is a weaker version because you cannot move the object once it’s levitating and you need to tap the target directly to cast it. It may have a shorter cooldown in-game compared to its counterpart but having to potentially get closer to danger to cast it is a big downside.

Lumos is a very simple spell that causes light to glow from the top of your wand. As a basic utility spell that just improves visibility in dark places, we’ll leave this at B-tier.

Reparo, also known as the Mending or Repairing Charm, allows its caster to fix broken objects. This will likely only be used out of combat in specific situations/puzzles.

Revelio causes hidden messages, objects, passages, and other things to be revealed to its caster. The spell will likely be very useful for solving puzzles or exploring secret areas in Hogwarts Legacy.

Riddikulus is a classic spell that allows its caster to defeat a boggart by thinking of something funny and turning it into that funny something. Unless we’re facing boggarts often, this spell is too niche to rank higher but it will of course be great when the situation calls for it.

Thanks for checking out our list of the best Hogwarts Legacy spells. Be sure to also check out all our other Mobalytics tier lists.