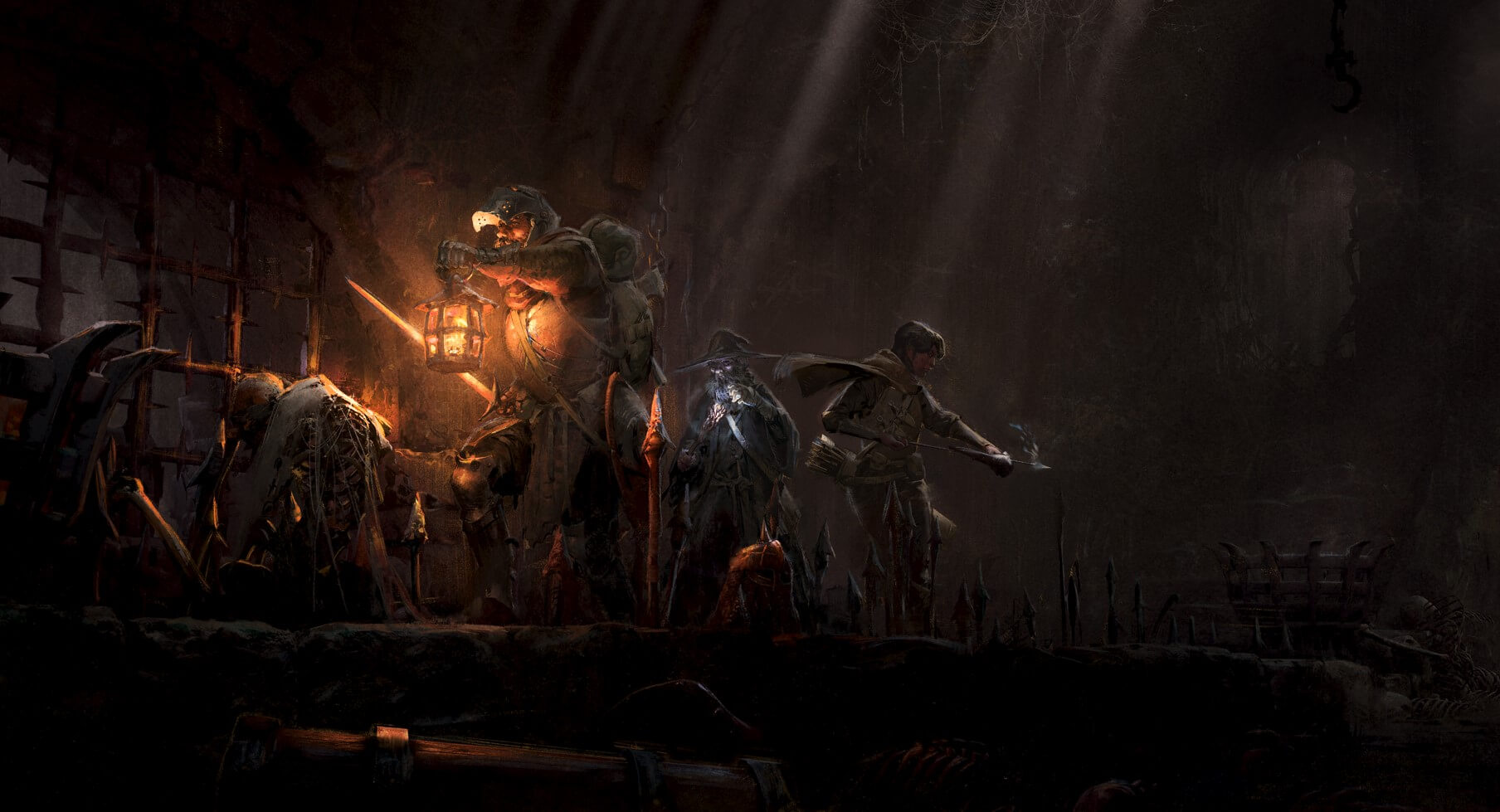 Our team has been absolutely loving Dark and Darker and despite the official release being about a year away (projected to be Q4, 2023), we just had to make a tier list based on our experiences and the community’s perception during the playtest.

These rankings are definitely bound to change over time as the game is still very much in its early stages.

As always, our philosophy toward tier lists is that although metas will inevitably form, player preference and playstyles should always come first.

The Dark and Darker team has done a great job balancing the classes and every class will shine in different situations.

As a result, our rankings will be greatly influenced by a class’s overall versatility (solo, duos, and trios, along with being able to fit in different team comps) and skill potential with time.

Here are our rankings for the best classes in Dark and Darker:

We also have an infographic version of our Dark and Darker tier list below: 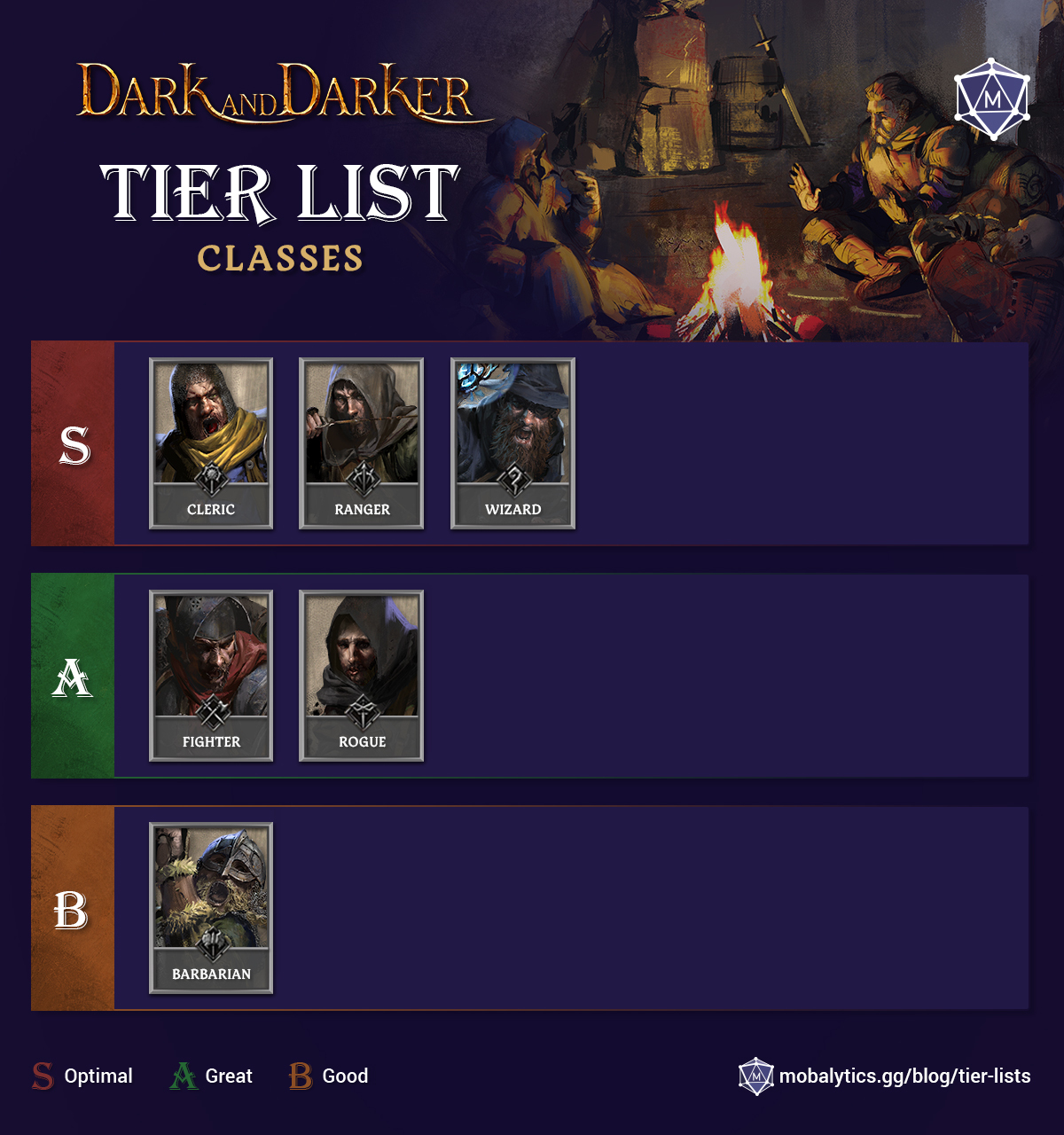 As we referenced earlier, versatility is incredibly important in Dark and Darker as you never truly know how a run will turn out.

Even if you have a plan in mind, things can go south quickly, so the more adaptable classes inherently have some advantage in that department.

The Cleric, Ranger, and Wizard all exemplify this versatile adaptability while still boasting incredible upside in terms of skill expression and impact potential. 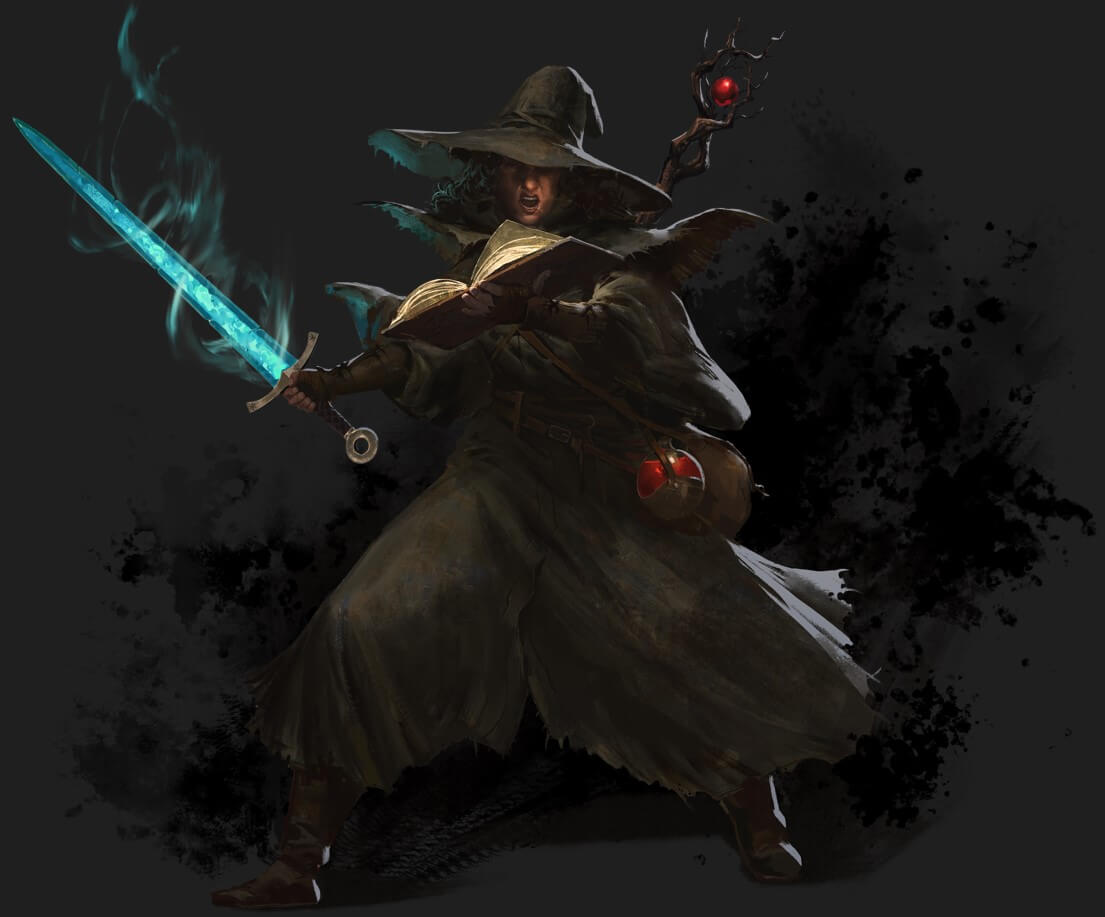 Having a Cleric in your party is one of the most comforting things – they can basically do it all!

Whether it’s healing, tanking, resurrecting, dealing bonus damage to undead in maps where most of the enemies are undead, Clerics can fit perfectly into almost any team comp.

Their main “downside” is that they’re slow, so it might be hard to pair with a Barbarian + Rogue that want to play fast, otherwise they’re a very welcomed site in your lobby.

If we’re measuring a class’s strength based on the number of complaints they get, the Ranger is definitely S-tier.

Boasting incredible DPS from long range, Rangers can often kill their opponents before they get a chance to touch them.

On top of damage output, they also have great utility options in the form of traps, enemy detection, and self-healing to make them a valuable asset for any dungeon party.

Wizards are currently the class with the highest skill-cap because with great power comes great responsibility.

The early levels of learning a Wizard (especially as your first class) might be rough and you might Fireball yourself and/or your allies, but once you get used to it, you can offer some insane plays.

As of right now, it’s the best class for 1v3’ing due to the sheer burst damage Wizard offers along with incredible maneuverability with Haste and Invisibility.

Check out the streamer, sasatikk, for a look at how Wizard is played at the very highest levels and you’ll see why we have it as S-tier.

The A-tier Dark and Darker classes are still great but slightly more situational than their optimal counterparts.

On one end, we have the Fighter who is a solid choice for beginners along with the Rogue who can really shine in solo play or certain team comps built around them. 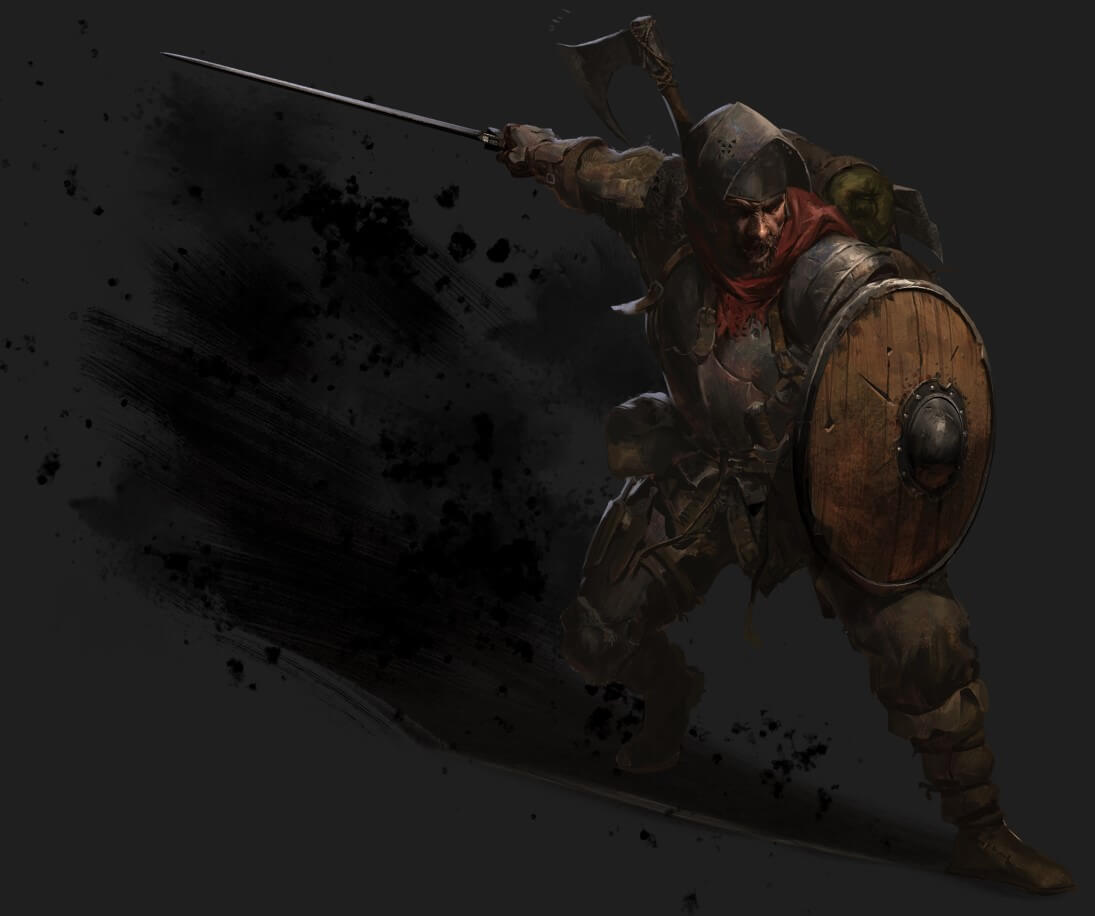 Just like in Dungeons and Dragons, the Fighter is the vanilla melee class that is very beginner-friendly, basically the Soldier 76 (Overwatch) or Mario (Smash Bros) of Dark and Darker.

They’re able to wield a wide range of weapons and offer some nice self-utility but are among the most lacking when it comes to their team utility potential.

As the masters of stealth, Rogues are very good at what they do – scouting, backstabbing from the shadows, and getting through locks with ease.

However, if your party isn’t built to play to their strengths, Rogues can feel a bit awkward since they aren’t the greatest in open combat.

If you play to their strengths by using darkness to your advantage and preying on unsuspecting targets rather than fighting them head on, the class will reward you and your team.

Out of all the classes, it’s definitely among the best for solo play since you can outmaneuver trios and duos, hence why we have it above Barbarian.

B-tier classes, although still good and viable, are the most linear in terms of playstyle and will usually need the team to be built around them the most. 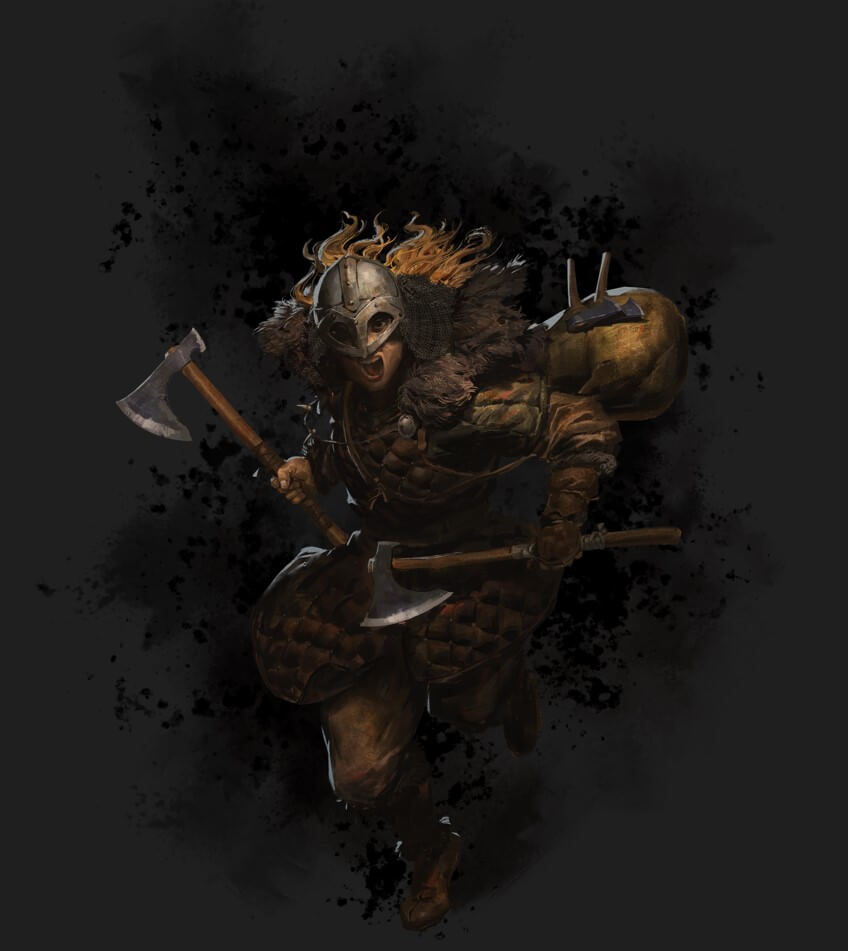 If you don’t care about sneaking and trying to be quiet, the Barbarian is the class for you.

We recommend pairing the Barbarian with the likes of the Wizard or Cleric so you can buff and enable them.

Without buffs, a Barbarian, although still somewhat scary, is much less of a threat and pretty predictable for experienced enemies.

However, a team that is built around a good Barbarian player is one of the scariest team comps.

Thanks for checking out our list of the best classes in Dark and Darker. Be sure to also check out all our other Mobalytics tier lists.