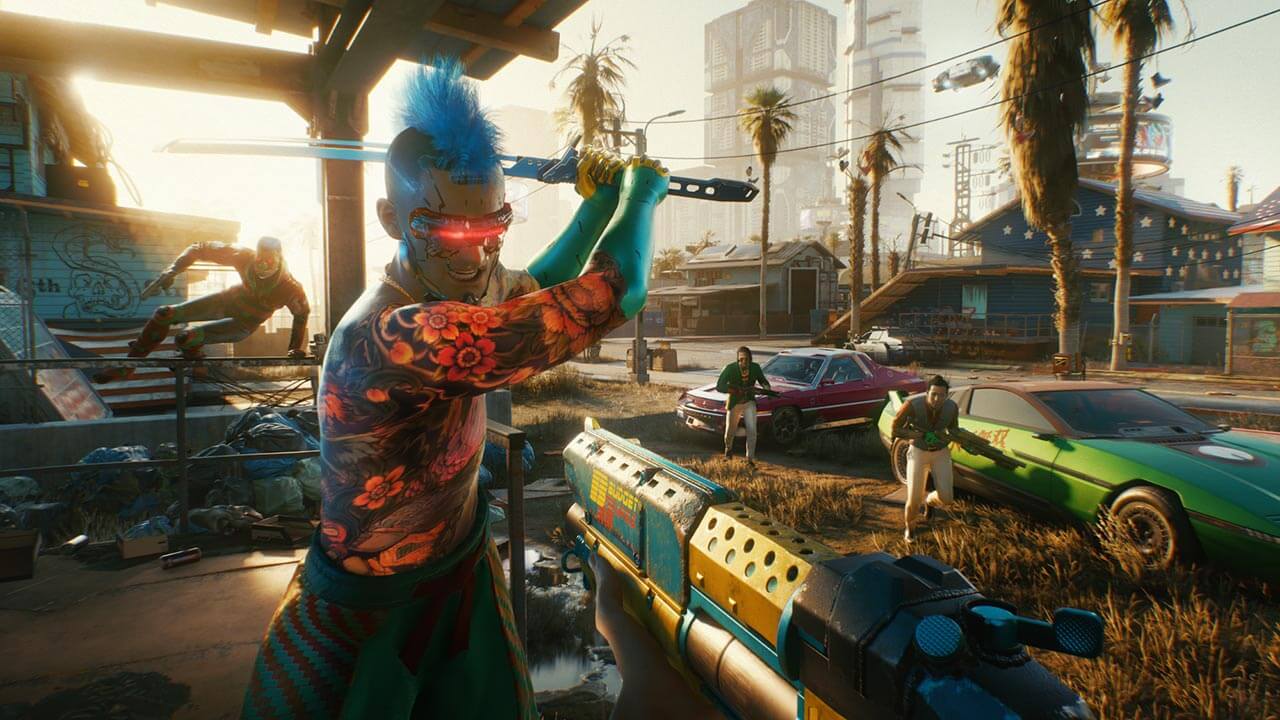 If you’re looking for the best Cyberpunk 2077 weapons, you’ve come to the right place!

We’ve got you covered with our recommendations for handguns, melee, rifles, shotguns, SMGs, and snipers to give you a ton of options for your playstyle preference.

Make sure to come back in future patches for our latest updates.

Here are our rankings for the best weapons in Cyberpunk 2077:

For a visual version of our list of best weapons, check out our infographic below! 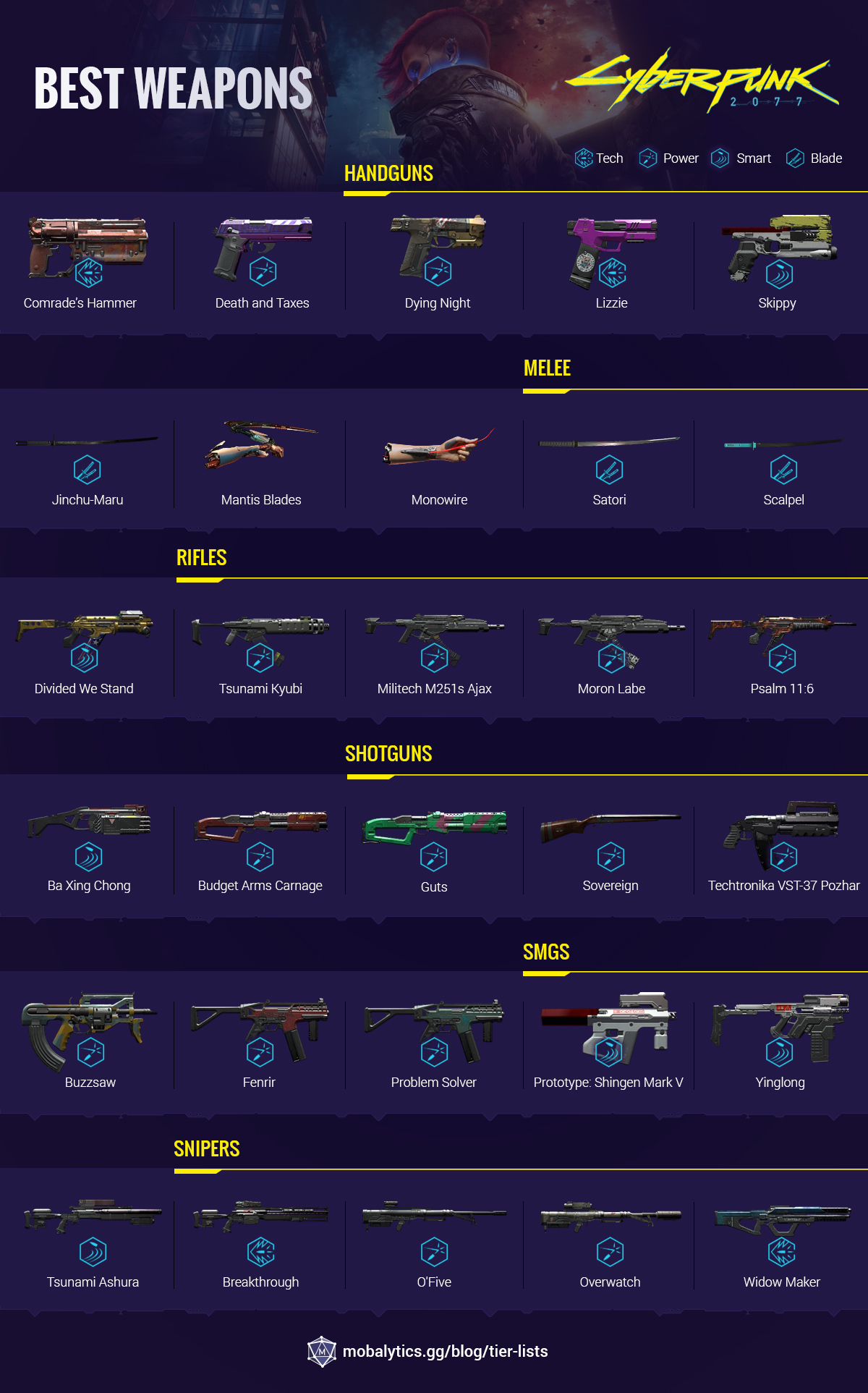 Where to Find the Best Handguns in Cyberpunk

Comrade’s Hammer, an Iconic Tech Weapon, can be obtained through crafting.

If you have the Grease Monkey Perk, loot the Crafting Spec from the leader in Suspected Organized Crime Activity in Arroyo.

Then, craft with the following components:

Death and Taxes is an Iconic Variant of the Tsunami Nue Pistol and the weapon of Maiko Maeda.

There are two ways to obtain Death and Taxes:

Dying Night is a variant of the Militech M-10AF Lexington, the signature weapon of V, and the first Iconic weapon that is available.

Getting it is pretty easy, all you have to do is visit Robert Wilson’s shop and then purchase Dying Night for free, completing The Gun side job.

Lizzie is an Iconic variant of the Militech M-76e Omaha. The pistol was formely owned by Susie “Q”.

Before Patch 1.5, you could find Lizzie on a table outside the server room but now, you’ll find it in a private room near Judy Alvarez’s den within Lizzie’s Bar during the Automatic Love main job.

Skippy is an Iconic variant of the Arasuka HJKE-11 Yukimura and one of the most unique guns in the game. We don’t want to spoil this for you if you don’t already know why, so we’ll leave it at that for now.

To get the Skippy pistol, you’ll need to head to Vista del Rey in Heywood and find it next to a body in an alley.

Where to Find the Best Melee Weapons in Cyberpunk

Jinchi-Maru is an Iconic Katana that is the signature weapon of Sandayu Oda, the cyberninja, and formerly owned by Goro Takemura (Oda was his apprentice).

You can get Jinchi-Maru during the Play it Safe main job where you can loot it from Oda.

Unlike other weapons in this list, Mantis Blades are not Iconic weapons, but due to having the ability of an unlimited Light Attack combo and just being one of the coolest melee weapons in the game, we couldn’t leave it out.

The Legendary variant can be purchased from the Ripperdoc in either Downtown or Wellsprings at 45 Street Cred for €$35550.

Another non-Iconic weapon, the Monowire provides an interesting charge mechanic powered by a battery so you’ll need to keep that in mind.

Its Legendary variant can be purchased from the Ripperdoc in either Downtown or Wellsprings at 45 Street Cred for €$35650.

The Satori is an Iconic katana and Saburo Arasaka’s weapon. You may know it from crit builds due to its 500% crit damage increase (at the cost of 20% base damage).

You can find it during The Heist main job inside Saburo Arasaka’s AV parked on the roof’s landing pad.

The Scalpel is, you guessed it, another Iconic katana. It’s known for its electrical damage and Crit/Bleed buffs when Sandevistan is active.

You can find it during the Big in Japan side job as your reward from Dennis (leaning against barrels).

Where to Find the Best Best Rifles in Cyberpunk

Divided We Stand is an Iconic variant of the Nokota D5 Sidewinder assault rifle. Its unique modifier allows you to target 5 enemy targets at once (while Smart Link is installed).

You received Divided We Stand by beating Walker’s score during the Stadium Love side job. Alternatively, you can get it from fighting 6th Street members.

The  Kyubi is a power assault rifle added in Patch 1.6 that works best when paired with a silencer due to its high round damage.

It can be purchased from Weapon Vendors in several locations and from Marty Jenklow in Biotechnica Flats.

The M25S1S Ajax is a Power Assault Rifle that has a slower firing rate and high recoil in exchange for accuracy and high damage, specifically longer range combat.

To obtain its Legendary variant, you can buy it from Marty Jenklow within the Biotechnia Flats.

Moron Labe is an Iconic variant of the Militech M251s Ajax (discussed above), that packs an increased rate of fire and chance to dismember targets.

To get Moron Labe, you’ll need to do the Suspected Organized Crime Activity (West Wind Estate) Scanner Hustle. Its Crafting Spec is dropped by Anton Kolev.

Psalm 11:6 is an Iconic variant of the Nokota D5 Copperhead assault rifle with a unique modifier that provides Thermal damage with increased chance to apply burn to targets.

This is another weapon that is acquired through Suspected Organized Crime Activity, specifically Just Say No where it is dropped by Tom Ayer as a Crafting Spec.

Where to Find the Best Shotguns in Cyberpunk

Ba Xing Chong is an Iconic variant of the Kang Tao L-69 Shotgun that was owned by Adam Smasher. It provides a modifier that greatly increases your chance to dismember targets.

To find Ba Xing Chong, there is a locked room on the Ebunike. It is accessible after defeating Adam Smasher and looting the access card.

The Budget Arms Carnage is a Power Shotgun that’s incredibly potent despite being a cheap pump shotgun.

The Legendary Carnage variant can either be purchased from the Weapon Vendor in Japantown or dropped by Cedric Muller during the Cyberpsycho Sighting: On Deaf Ears gig if you want a unique modifier.

Guts is an Iconic variant of the Budget Arms Carnage we mentioned above that was added in Patch 1.6. This one is special though because its Rebecca’s Shotgun (from Edgerunners) and includes a modifier that deals Chemical damage and Poison chance on-hit.

To obtain Guts, head to the southern section of Memorial Park and look for the bushes near the three praying months.

Sovereign is an Iconic variant of the Rostović DB-4 Igla Double-Barrel Shotgun with a unique modifier that allows the two barrels to be aimed down sight with improved load speed and spread to boot.

To obtain Sovereign, you can get it from the Suspected Organized Crime Activity: Modern Labor Market as a drop from Shinobu Amai.

The VST-37 Pozhar is a Power Shotgun that was also added during Patch 1.6 that really packed a punch due to its 5x damage, especially when headshotted.

You can find the VST-37 Pozhar’s Epic rarity at the Jacked and Coke club in Vista del Rey, various Weapon Vendors, or Marty Jenklow in Biotechnica Flats.

Where to Find the Best SMGs in Cyberpunk

Buzzsaw is an Iconic variant of the Darra Polytechnic DS1 Pulsar SMG with a unique modifier that allows it to penetrate objects while maintaining ricochet (only after first penetration).

To obtain the Buzzsaw, complete the Suspected Organized Crime Activity: Vice Control and use the Crafting Spec dropped by Yelena Sidorova.

Fenrir is an Iconic variant of the Militech M221 Saratoga SMG with a unique modifier that changes its damage type to Thermal (with burn chance), increases damage, and high dismemberment chance against targets.

To obtain Fenrir, loot the table next to the captive monk during the Sacrum Profanum/Losing My Religion side job.

Problem Solver is an Iconic variant of the Militech M221 Saratoga SMG with a unique modifier that increases its magazine size and greatly improves its firing rate in exchange for very high recoil and bullet spread.

To obtain the Problem Solver, complete the Riders on the Storm side job and get it as a drop from the Wraith leader near the camp’s main entrance.

Prototype: Shingen Mark V is an Iconic variant of the Arasaka TKI-20 Shingen SMG with the ability to track 3 enemies and lock onto them. It also deals Thermal damage with burn chance and fires explosive rockets that deal even more Thermal damage on-hit.

To find Shingen Mark V, look for the trailer marked “667” at Arasaka Industrial Park – it will be inside.

Yinglong is an Iconic G-58 Dian SMG with a sweet unique modifier that deals Electrical damage with chances to cause EMP explosions on impact.

To obtain Yinglong, complete the Suspected Organized Crime Activity: Living the Big Life, and get it as a drop from Denzel Cryer, the primary target.

Where to Find the Best Snipers in Cyberpunk

Ashura is a Smart Sniper Rifle that can only hold one round in its clip, but it’s an incredibly strong one. This makes it a great pairing with Smart Link cyberware.

You can find Ashura’s legendary version at the Weapon Vendor in The Glen.

Breakthrough is an Iconic variant of the Tsunami Nekomata Sniper Rifle with the unique ability to ricochet multiple times after penetrating walls.

The O’Five is an Iconic variant of the Techtronika SPT32 Grad Power Sniper Rifle but has a unique effect that causes explosions and lights enemies on fire. You also get a bonus to crit and reload speed for each enemy on fire but in exchange, the gun can only hold 3 rounds.

To obtain O’Five, you’ll need Body attribute 5  and then do the Beat on the Brat: Arroyo side job where you can get it from Buck Arnold.

The Overwatch isn Iconic variant of the Techtronika SPT32 Grad Power Sniper Rifle with a unique effect of increased reload speeds along with a custom silencer.

You can either obtain Overwatch from the Riders on the Storm side job (gifted to V from Panam) or by finishing the game with the Star ending and getting it as a reward.

The Widow Maker is an iconic variant of the Militech M-179e Achilles Precision Rifle with a unique modifier an extra projectile for each round fired dealing more damage based on charge percentage along with Chemical/Poison damage in exchange for increased charge time and recoil.

You can get the Widow Maker from either the Ghost Town main job or the Queen of the Highway side job where it’s dropped by Nash.

Want to stay on top of the meta for other games? Check out all our other Mobalytics tier lists.