How to Play Undergound

TFT Set 8: Monsters Attack is coming very soon, and we’re all excited to try out the new champions. The game is out now on the PBE, and people are having a blast with all of the new synergies.

In this guide, we’ll be taking a deep dive on the Underground trait. We’ll go over how it works, what champions make up the trait, things to keep in mind, and some team comps to try out.

Underground is an economic trait in TFT, meaning it’s a trait that grants you extra loot like Gold or extra Item Components.

Economic traits are known for being high risk, high reward, and are often very fun to play. (This is assuming the trait is balanced and not overpowered that it’s free tendies).

Underground: The Underground periodically checks in with the loot from their current heist. You may choose to cut and run and take the current loot, or continue the heist to get even better rewards. After completing a heist, a new one begins. It takes 9 total progress for a heist to complete.

Underground (3): The Underground makes 1 progress after each Player Combat Round. After a loss, they make 3 progress.

Underground (5): The Underground makes 2 progress after each Player Combat Round. After a loss, they make 5 progress.

In order to get loot, you need to accumulate 9 progress. For Underground 3, this is equivalent to 9 round wins, or 3 round losses.

As with most economic traits, a common strategy is to lose streak early, and build up an economy to make a large transition into a winning board. Underground further facilitates that strategy.

If you don’t know the basics about leveling strategy yet, you can check out our Leveling Fundamentals Guide first to get an idea.

The idea is quite simple really. For Stages 2 and 3, you’re looking to lose as many rounds as possible, while also saving as much health as possible.

The more you practice this, the better you will get. It’s important to know exactly how many units and items to place on the board to lose, but also to try and takedown as many enemy units as possible.

A common weakness of all economic traits is the lack of synergy between the units. Here’s a list of all the traits the Underground units have. (Notice there is no overlap)

However, even though there isn’t much overlap, there’s only 5 Underground units. This gives you 3 team slots at level 8 to flesh out more synergy.

Let’s briefly go over each Champion in the Underground trait and what you can do with them.

Kayle is the only 1-cost of the Underground trait, and is a fairly simple ranged DPS. Her ability scales off Attack Speed, which pairs nicely with her Duelist trait.

Depending on the patch, we may see Underground and Duelist reroll be strong, centered around Kayle carry.

Ezreal has a mixed ability, providing some utility and also dealing damage. The Recon trait is mostly a defensive trait, but can be used to possibly protect Ezreal from things like Hackers.

If you do decide to play more Recons, that will give him bonus Crit Chance, so having ways to scale Crit Damage can be nice.

Vi is the only frontline unit for the Underground trait. However, she does have two classes: Aegis and Brawler. This makes her a very strong frontline to build around, as she can pair with a lot of different units to activate her traits.

Sona is the only Underground unit that scales mainly off Ability Power. While there is potential for teams to build around Sona, her Heart trait makes her very valuable as utility unit.

By casting more, she can deal good damage, but most teams are better off placing damage items on their other units while stacking more utility on Sona (Blue Buff, Chalice of Power, etc).

Samira is the last Underground unit, and is a 4-cost. If you can find an early Samira, you can start building up a lot of Progress very fast.

Samira is also a nice power spike to hit. Around Stage 4, once you start finding 4-cost units, you will be transitioning your strategy from losing to winning. Having a strong carry to boost your team helps a lot with that.

Like Vi and Sona, she has two classes, bringing more flexibility to the trait. Sureshot is a very strong damage trait, and Ace is a trait that only requires Samira to be active (1). This lets her execute enemies at low health.

Samira will definitely be a strong carry to build around, but she may not necessarily be your main carry. Even still, as you reach the end game, itemizing more carries will be important.

There are a lot of Underground Augments to choose from with the new Hero Augments system. Since the Set is still in development, feel free to try them all. Build around Kayle, Sona, Samira, whoever you want.

As the meta develops, there will be clear victors for the best augments, but for now, you can give them all a try. Just be sure to adapt your team comp accordingly.

Here’s our take on an Underground comp starring Ezreal and Vi as the main units. These two will carry you most of the game until you stabilize late game with Samira and Leona. 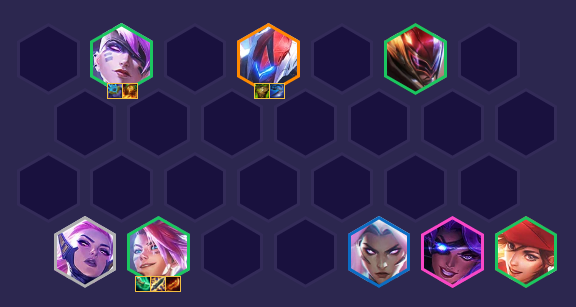 Underground is a familiar but fresh addition to Set 8’s roster. We’ve seen traits that incentivize losing like Mercenary and Fortune, but Underground allows you to win without ruining the strategy.

We don’t know exactly how the loot works yet, but we’ll be sure to update this guide as we learn more about the trait.