How to Play Supers

TFT Set 8 is right around the corner, and there are plenty of exciting new traits coming out. We’ve been covering some traits in our guides like Underground, Anima Squad, and more.

For this guide, we’ll be going over the new Supers trait. Supers is the trait that incentivizes slow rolling, and is quite simple overall.

In general, slow roll traits have historically either been extremely broken, or barely playable. Hopefully with Supers, we find a better balance in the meta.

The Supers trait only has one bonus, and activates when you have all 3 units.

At the cost of 3 unit spots, you can gain a 30% damage bonus for your entire team. A 30% bonus is very strong, and scales multiplicatively with other forms of damage like Attack Damage or Ability Power.

However, the issue lies in the fact that the Supers units are low cost units that will be weaker than late game units. However, you can make up for this by 3-starring the Supers, making them more in line with higher cost units.

This is also beneficial for the trait, as the bonus damage percentage increases as you 3 star more units on your team.

Supers: Supers strike a pose at the start of combat, granting allies 30% bonus damage. For every three-star unit on your team, the bonus damage % is increased by 5%.

Supers only has 3 units as part of the trait, and none of the units have any overlapping traits other than Supers. As such, we likely won’t see too much flexibility with the Supers trait. Even still, we may see future Supers comps run carry units other than the Supers or any obvious choices.

Here’s a list of the traits you can branch into with the Supers units.

At first glance, Duelist appears to be the main offensive trait to lean into for the comp. There are plenty of other low cost Duelist units that you can 3 star alongside Gangplank.

Brawler and Mascot are two frontline traits that are available to the trait, so the Supers comp can easily branch into one of those two.

Lastly, Heart is also present with Lee Sin, which means that the Supers comp can potentially branch into an AP comp as well. In an AP comp, Gangplank can be a bit of a wasted slot, but maybe with an Emblem or something there is also potential there as well.

Let’s briefly go over each Champion in the Supers trait and what you can do with them. We’ll also show each Champion’s Hero Augments so you can know what to look out for.

Gangplank is the first and only 1-cost units in the Supers trait as the other two are both 2-cost units. He has a simple ability where he fires, dealing some damage. However, he also has somewhat of a built in Quicksilver as he cleanses debuffs when he casts. With a low mana pool, this can be quite powerful as he will cleanse himself constantly from things like Morellonomicon or Attack Speed slows.

Get Paid: Gain a Gangplank. When you field him, your team has a 25% chance to gain 2 gold on kill.

Lee Sin is a great unit for Supers as he has three traits, making the team comp more flexible in the early and mid game. Brawler will always be a solid trait to branch into for frontline, and Heart is a nice little bonus if you can get it active. Lee Sin is also a great frontline unit to pair with Gangplank as he will shield both himself and a nearby ally with his ability.

All in all, Lee Sin is a great utility unit for the Supers trait and also many other comps as well.

Flurry: Gain a Lee Sin. He gains 60% Attack Speed, tripled for 5 seconds after casting his Ability.

Invigorate: Gain a Lee Sin. When your field him, your team gains 15% Attack Speed, doubled for 4 seconds after being shielded.

Malphite is the last Supers unit and is mainly a frontline tank. His ability also does a bit of damage, and when you 3-star him, he will contribute some damage, but he will mainly be there to tank as much as possible.

Mascot also provides another way to build the frontline instead of with Brawlers alongside Lee Sin.

Rock Solid: Gain a Malphite. He gains Ability Power equal to 75% of his Armor and his Ability’s Armor duration is increased by 4 seconds.

Guardian Spirit: Gain a Malphite. When you field him, your team restores 15% of their missing Health on cast.

There are a lot of Supers Augments to choose from with the new Hero Augments system. Since the Set is still in development, feel free to try them all. Gangplank is the easy choice to build around, but you can experiment with Lee Sin and Malphite as well.

There are no Supers Emblems in the augments, but there is a Supers Heart and Soul. These are interesting as they give you the bonus, while also allowing you to drop units.

If for example, a different slow roll comp is very powerful and you can get a Supers Heart, you can try to slot in Malphite and Lee Sin and give your team a massive damage bonus. Is this powerful enough to warrant taking over other augments? Who knows. But the potential is there.

Here’s a simple starting comp with Gangplank as the main carry. A lot of Gangplanks damage will come from his ability, so we have a hybrid mix of items with Blue Buff to spam, and Bloodthirster to sustain. Lastly, we have Jeweled Gauntlet as a solid hybrid item as it provides both Crit stats and scales his ability further.

The rest of the comp leans into the Duelist trait to further buff up Gangplank. We want to try to use as many low cost units in this comp to get as much bonus damage from Supers as possible. Alistar is the only 3 or higher costed unit, and provides additional frontline for the team. 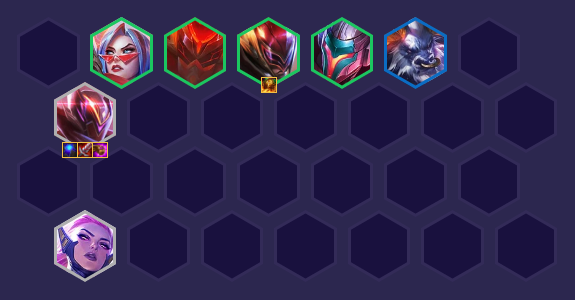 While Gangplank is the easiest way to build around Supers, we don’t necessarily think it is the best. In this comp, we combine Supers along with low cost Laser Corps units to get a strong team. Supers is there to buff up the Laser Corps units while they do most of the carrying.

For a full guide on this team comp, you can check it out here.

Supers is a fun trait to see and theorycraft around. Every set, there is usually one trait that incentivizes slow rolling like Moonlight in the past.

With only three units, it’s fairly simple to see a basic team comp built around Gangplank, but I’m sure there is more experimentation to be had as well.

Maybe you can pick every carry Hero Augment for a 1-cost unit each game and simply slot in 3 Supers units. Is that enough to be good? If it is, the trait is definitely overtuned, but that’s some of the flexibility that can be seen with the trait.

Supers will definitely have it’s time to shine as slow roll comps always find a way to break the meta until they are nerfed. Try to find out the broken combination while you can before everyone else finds it and hops on.