How to Play Heart

In just about 24 hours, TFT Set 8: Monsters Attack will release! With it comes a whole new array of champions and traits. I’ve been doing a series of guides on the different traits such as Underground, Supers, and more.

For this article, I’ll be covering the new Heart trait, which is a simple and flexible trait. Heart provides a strong bonus to just about any team comp, so expect to see a lot of it splashed into many different comps.

The Heart trait provides a scaling AP bonus to your team as your Heart units cast. While you may be quick to think that this trait is overpowered, it’s definitely one of the traits that gets more out of hand the more to invest into it.

With just two Heart units, you can maybe expect them to cast a few times in an average fight, maybe upwards of 5 or so casts in a longer fight. Even still, the bonus is quite powerful at any investment level.

Let’s say you have two Heart units and they both can cast within the first 5 seconds of the round. That turns into 8 Ability Power for each unit on your team. Not bad.

Now imagine you can cast maybe 4 times within the first 5 seconds of a fight (with Blue Buff and such). With just two Heart, that’s already 32 Ability Power per unit. In an 8 unit team, that translates to 256 Ability Power. That’s over 3 Rabadon’s Deathcaps worth of value to your team.

Now those numbers sound great, but casting 4 abilities within 5 seconds between 2 units is quite hard. It’s also important to note that sometimes you may take too long to ramp up Ability Power and the opposing team already gained a significant advantage in the fight.

Even still, for any drawn out fight, Heart gains more and more value.

Heart: When Heart units cast their spell, all allies gain stacking Ability Power for the rest of combat.

Heart has a decent amount of units, 6 units to be exact. Within these units, there isn’t too much overlap, so you’ll mainly see Heart as a flexible addition in many comps.

Here’s a list of the traits you can branch into with the Heart units.

Of all of the Heart unit traits, only Syndra and Yuumi overlap with Star Guardian, which is very thematic as Star Guardians are an AP based team comp that spam abilities with their mana generation.

In Star Guardian comps, you’ll almost always want Syndra and Yuumi, and you can potentially even go up to 4 Heart. For most other comps, you likely will just splash in 2 Heart units to get the bonus effect but at a smaller rate.

Let’s briefly go over each Champion in the Heart trait and what you can do with them. We’ll also show each Champion’s Hero Augments so you can know what to look out for.

Lulu is a simple backling unit with a fairly simply ability dealing magic damage. Heart isn’t really a trait you try to prioritize early as fights don’t last as long. Lulu will mainly be a pick up for comps that want to go into Gadgeteen.

Growth Spurt: Gain a Lulu. When she casts her Ability, she gains 125 bonus Health and 25 Ability Power (this can stack).

Foster Growth: Gain a Lulu. When you field her, she and her allies gain 35 Ability Power when equipped with an item.

Lee Sin is a frontline unit that provides a lot of utility with his shielding ability. Furthermore, he is a unit with 3 traits, making him a very flexible unit. Brawler is a simple but effective frontline trait.

Since Lee Sin has Heart, this means that any comp with a Brawler frontline can easily flex into Heart 2 with just one additional unit.

Flurry: Gain a Lee Sin. He gains 60% Attack Speed, tripled for 5 seconds after casting his Ability.

Invigorate: Gain a Lee Sin. When your field him, your team gains 15% Attack Speed, doubled for 4 seconds after being shielded.

Yuumi is another Heart unit with three traits, and we talked about her a bit already when we covered the Star Guardian synergy. Yuumi will pair nicely along with Syndra to give the entire team bonus AP when she casts.

The Mascot trait also provides flexibility in picking frontline units as you can use Mascots as your frontline instead of Brawler with Lee Sin. One thing to note is that Yuumi being a Mascot is a bit, anti synergistic, as when Mascots die, they give other Mascots bonus Health Regen. However, Yuumi likely will be one of the last units to fall as she sits in the backline.

Even still, an extra trait is always beneficial.

Zoomies!: Gain a Yuumi. She grants your team 18% Attack Speed and Movement Speed.

Sona is yet again another Heart unit with 3 traits. You’re gonna see Heart units in plenty of team comps at this rate. Sona has an ability that provides multiple effects, such as dealing damage, healing, and providing CC. This makes her a very strong utility unit.

Her low mana pool also makes her amazing with items such as Blue Buff, which synergizes very well with the Heart trait.

Soraka is one of the carry 4-cost units in the game and will be a popular carry in the Admin comps. She is an AP carry with a large mana pool, but deals strong damage to enemies.

Heart will be one of the best ways to help scale up Soraka’s damage. This way, when she eventually casts, she can hopefully start one shotting enemy units.

Upgrade: Berserk: Gain a Soraka. After 15 seconds of combat, all of her Ability casts are empowered.

Syndra is one of the 5-cost carries in the game and is the end game carry for Star Guardian comps. 5-costs are not always easy to find, and can be difficult to build around, but the Star Guardian comp can still function with 4-cost units until you find Syndra.

Like Soraka, Syndra also has a large mana pool, but the Star Guardian trait will help her gain mana faster. Heart and Star Guardian are a deadly combo. Star Guardian will give your team tons of mana while Heart will scale up your teams Ability Power. These two things in combination should result in enemy teams falling.

The main weakness of Star Guardian comps will be the lack of frontline compared to other comps, making them fragile. But if you can last long enough, the enemy team won’t be able to withstand all the damage.

Empowered Reserves: Gain a Syndra. When you field her, your team gains 7 Ability Power per unit on your bench.

There are a lot of Heart Augments to choose from with the new Hero Augments system. Since the Set is still in development, feel free to try them all. Build around Yuumi, Sona, Soraka, whoever you want.

The augments that provide an additional Heart unit are great and flexible augments for many comps. A Heart Heart will allow any team comp to complete Heart with only 1 Heart unit. However, this can be lackluster as you only have 1 Heart unit to cast. This means you won’t be getting that much AP in fights, but it’s still something.

Heart Crest and Crown are much stronger as they provide a Heart Emblem. Heart Emblem gives you the added Heart unit and lets you pick which unit to give the Emblem to. You can give this to any unit on your team with a low mana pool. This will result in giving your team a good amount of extra Ability Power.

The Blue Battery augments are great as they allow your team to gain extra mana. This gives any team a bit of a Star Guardian effect which will synergize greatly with the Heart bonus.

If you are playing Star Guardian or any team comp that can spam abilities, Luden’s Echo will be a great combat augment to pick. This will give your team a sizable magic damage bonus as your team spams abilities.

One of the best comps that utilizes the Heart trait is the Star Guardian comp. This is a fairly straightforward team comp that looks to jam in a bunch of Star Guardian units and blast the enemy team. 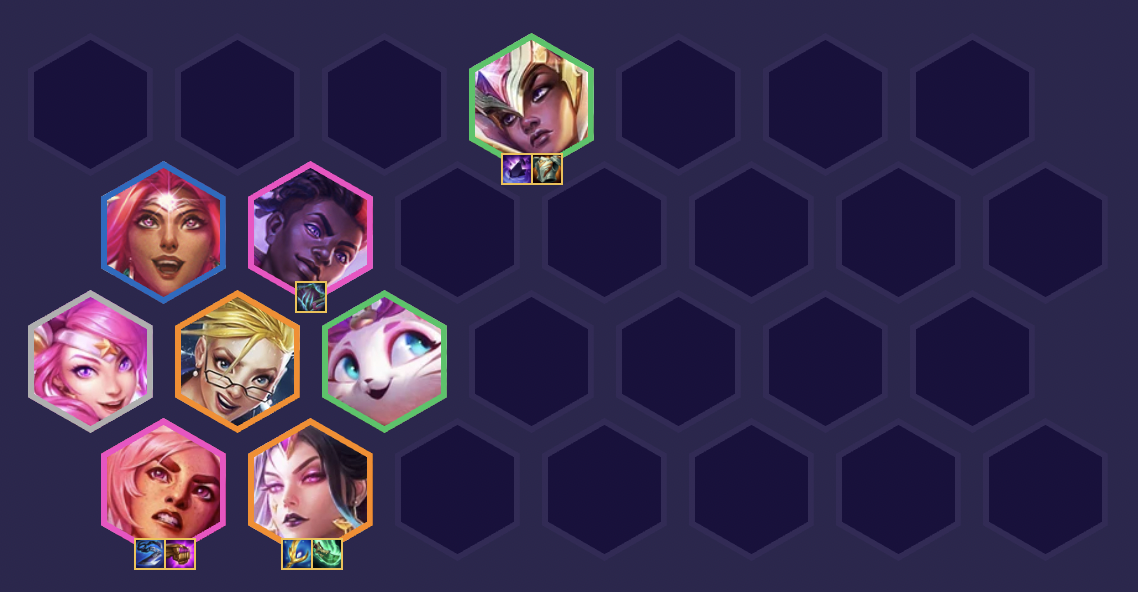 Note: As of writing this article, Star Guardians don’t seem to be in a great spot in the meta. We currently don’t have a vertical Star Guardian comp on our Tier List, but feel free to give this comp a try.

The thing about Heart is that you will often find Heart 2 in many team comps that run any sort of Ability Power carry. Heart is fairly easy to splash in, and even team comps with AD carries can utiltize Ability Power as well.

For example, the Admin comp with Soraka carry fits Heart 2 in very easily.

If you want to see and check out other Heart comps, you can look at our full Tier List.

You’ll likely be able to splash Heart into many team comps for some extra bonus AP. You can even opt to just throw in Syndra in the late game for some extra damage as well.

And of course, if you’re playing Star Guardians, the Heart trait will be your best friend.