This past weekend was the finals for the NA region. The top 3 players of this event would qualify for the world championship later in November.

Congratulations to the three NA players making it to worlds this set.

This tournament saw the most dominant performance any one player has made thus far in TFT competitive history.

Team Liquid’s Robinsongz was able to win 5 out of the 6 lobbies, absolutely dominating the competition. 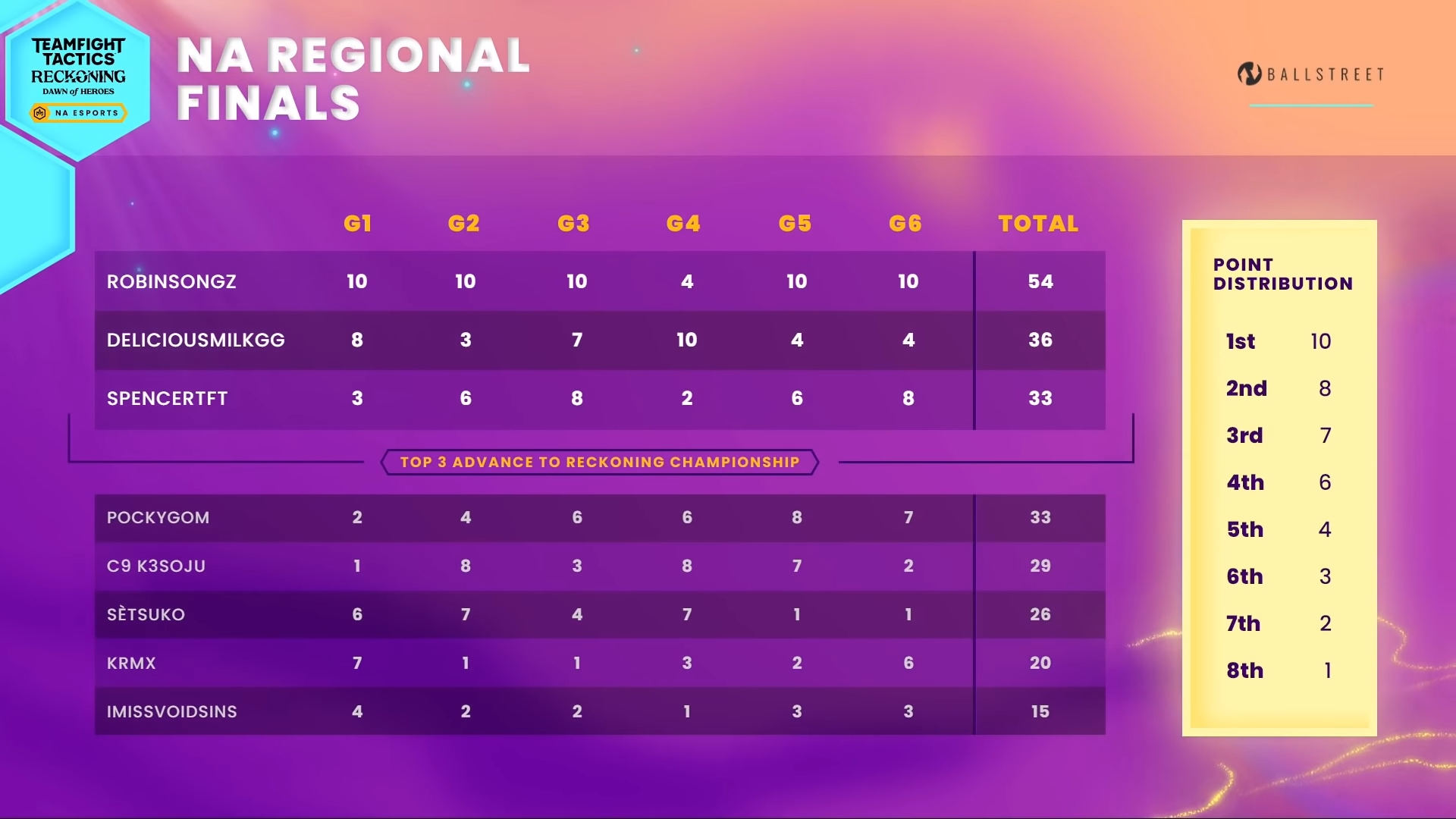 In this article, I’ll be going over Robinsongz’ strategy and what allowed him to display such a dominant performance.

Robinsongz followed a very simple strategy in games 1 through 3. He focused on building a strong early game board using traits like Skirmishers, Sentinels, and Knights. These units all synergize extremely well together, and can transition into either a Lucian or a Jax carry comp.

The first game saw Robinsongz transition his early game board into a Lucian carry comp. He had the choice to choose Jax as his main carry, but opted to go for Lucian in this game.

Usually when players decide on Lucian, they opt to run 6 Sentinels. However, this comp kept the 4 Knights as a way to also transition into Jax as well. Lucian and Senna can easily be switched out for Jax and Irelia for 3 Skirmishers instead.

This team is extremely similar to the first game. Instead of running Lucian and Senna, he runs Jax and Irelia for Skirmisher instead. Hitting level 9 also allowed him to put in Akshan, providing even more damage as well as an armor shred.

The choice to run Jax might be due to not having Last Whisper. Poppy is in the comp instead of Garen, which isn’t as bad as it may seem. Poppy’s ability will go off before Thresh, popping any spell shields the enemy may have so Thresh can hook them. Even still, if he had a Garen 2, he likely would have replaced Poppy.

In game 3, we see yet another Jax comp that almost exactly matches his previous 2 matches. This is where we see that his ideal team comp favors having in 4 Knights instead of other larger synergies like Sentinel or Skirmisher.

In most of these games, Robinsongz was able to get on a large win streak either in the early game or the mid game. In game 2, he was able to use this leverage to hit level 9, but in this game, he used that leverage to be able to upgrade all of his units including 5 star units like Garen and Viego.

Lucian and Jax comps are very consistent because they are essentially interchangeable in the final team comp. Robinsongz uses a core of 4 Knights, Rell, and then a carry combo like Jax and Irelia or Lucian and Senna.

What makes this so powerful is that you can start every game the same way and build similar items. Once you are level 7, you have two options for 4 cost carries depending on what you find. As you hit level 8 and start you optimize your team comp, you can then choose between the two carries to fit what you think will be better.

Lucian and Jax are also great comps to play as they are strong both early game and late game. Knights, Skirmishers, and Sentinels all synergize very well together and allow for a variety of openers.

For example at level 5 you can have boards like

These boards are just some examples of strong early boards that you can use, there are definitely plenty more.

Level 6 also provides a lot of 3-cost carries like Nidalee, Lee Sin, Riven, etc. These help you continue to be strong in the mid game before looking for a better carry.

Once you hit level 7, you have many 4-cost units that drastically upgrade your team.

Going into the tournament, many players knew that Jax and Lucian are both very strong carries. They can outright win a lobby, and they can even transition into an Akshan carry team comp in the late game as well. The first 3 games saw Robinsongz pilot these comps to perfection as he started the day with 3 wins in a row.

Games 5-6: Playing what you get

By the time games 5 and 6 came around, Robinsongz was already in a very comfortable position to finish top 3. In these games, he decided to play more based on his opener instead of forcing a consistent strategy like Jax or Lucian.

Game 5 was definitely the biggest surprise of the day. Yasuo is a strong comp, but most players would not put him in S tier.

While Robin was playing this game, he even noted that he is fine with a 5/6th place finish as he’s already quite ahead on points.

Even still, Robinsongz was able to finish 1st with this comp by constantly outplaying his opponents with Diana to CC enemy carries.

His opener also saw a quick Sejuani 2 and a good amount of Yasuo and Lee Sin copies. By balancing his economy well, he was able to 3 star 3 different units on his team comp, making his team quite powerful. Even though this team comp isn’t as consistent as Jax or Lucian, he saw an opening to play it, and was able to uncontested in the lobby.

If Robin wasn’t already styling on his opponents, game 6 was the nail in the coffin.

Robin started the game with a very early Redeemed start of Leona, Aatrox, and Varus.

Considering he was already guaranteed a top 3 spot at this point, he decided it would be worth it to go out with a bang and go for one more 1st place finish.

Kayle is not the most consistent comp to play, but if you’re able to pull it off, you can convincingly finish 1st place.

In this game, Robinsongz made a crucial adjustment by putting in 4 Mystic instead of 4 Knights. Hitting level 9 also allowed him to fit in Volibear as additional frontline.

Since his final opponents were magic damage based, having in the 4 Mystic made it extremely difficult for enemy teams to burst him down before Kayle fully ascended.

To see these matches yourself, check out the VOD below:

Robinsongz has just given a TFT performance like no other. Five 1st place finishes in 6 games is a feat that no player is likely to top in a long time.

A lot of things went right for Robinsongz this day. He was able to get a clutch item from Raptors in his Kayle game, he was able to find a Galio 3 in his second game, but most importantly, his play was on point.

Positioning, scouting, transitioning, itemization were all top notch and were ultimately what allowed him to show such a dominant performance.

TFT is without a doubt a high variance game with a lot of luck involved. Even still, Robinsongz was able to conquer RNGesus and put on a clinic. It’s going to be extremely interesting to see how he performs on the World stage in November.

Thanks for reading! Head to our Team Builder to start theorycrafting and be sure to check our best meta comps to find another answer to climb!