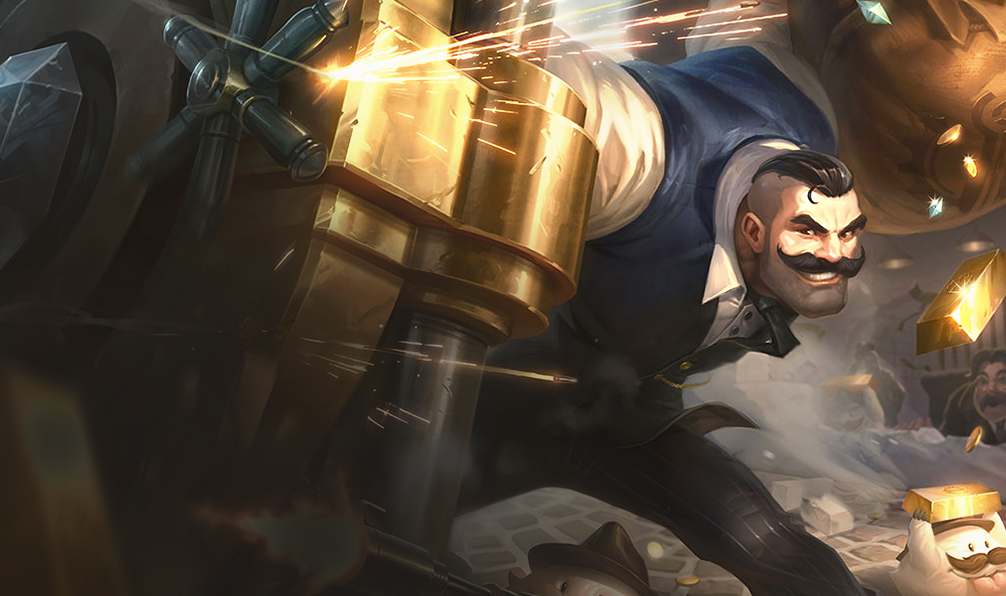 How to Learn from TFT Twitch Streamers (6 Follow Recommendations)

How to Learn from TFT Twitch Streamers (6 Follow Recommendations)

One of the best ways to learn and get better at any game is to watch the top players.

Many top players stream consistently and provide a lot of insight about their opinions in stream.

Usually, streamers and top players don’t disagree on too many things about the meta, but there can be some subtle differences in their play.

In this article, I’ll be going over the Liquid TFT players and show you ways to improve by analyzing their profiles and playstyles. 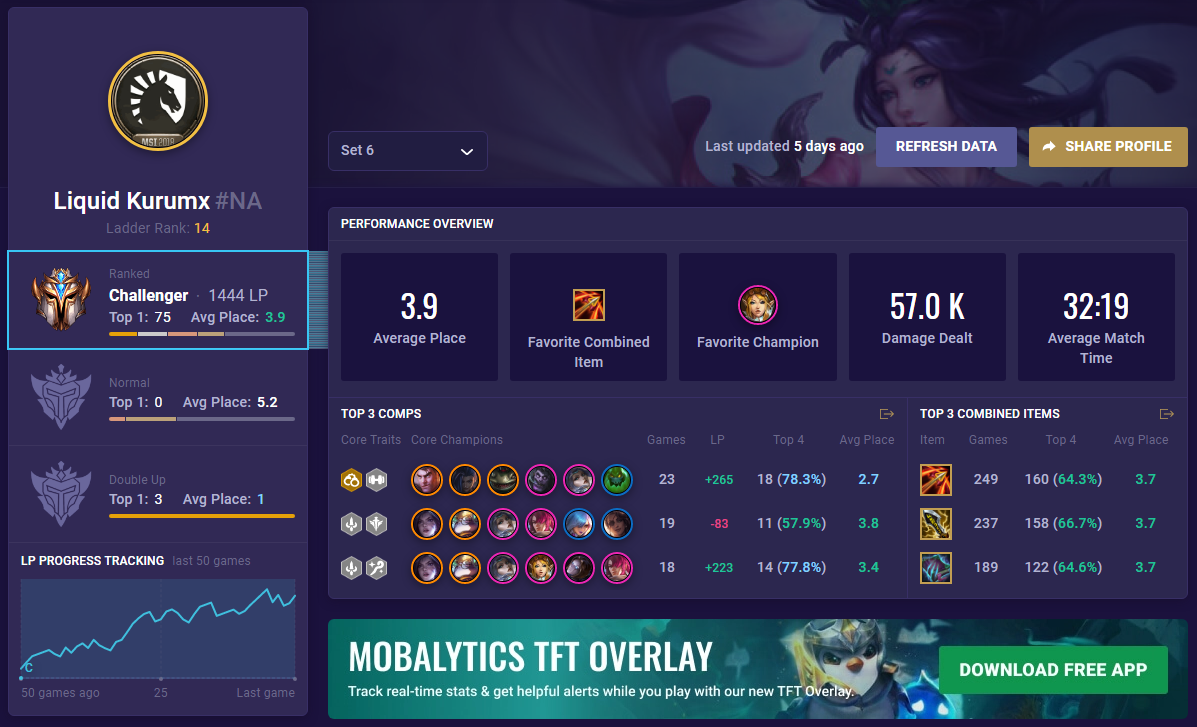 Taking a quick  look at Kurumx’s top 3 comps, we can see that his favored comp consists of running Challengers as the carry. This is a quick way to see if Kurumx is a player you’d be interested in watching. If you want to get better at playing Fiora/Kai’Sa/Yone comps, Kurumx is a great choice.

Runaan’s Hurricane is likely a flex pick for both Yone and Urgot. After that, Infinity Edge shows that he favors AD comps, and lastly, Morellonomicon is simply a strong item on any team comp. 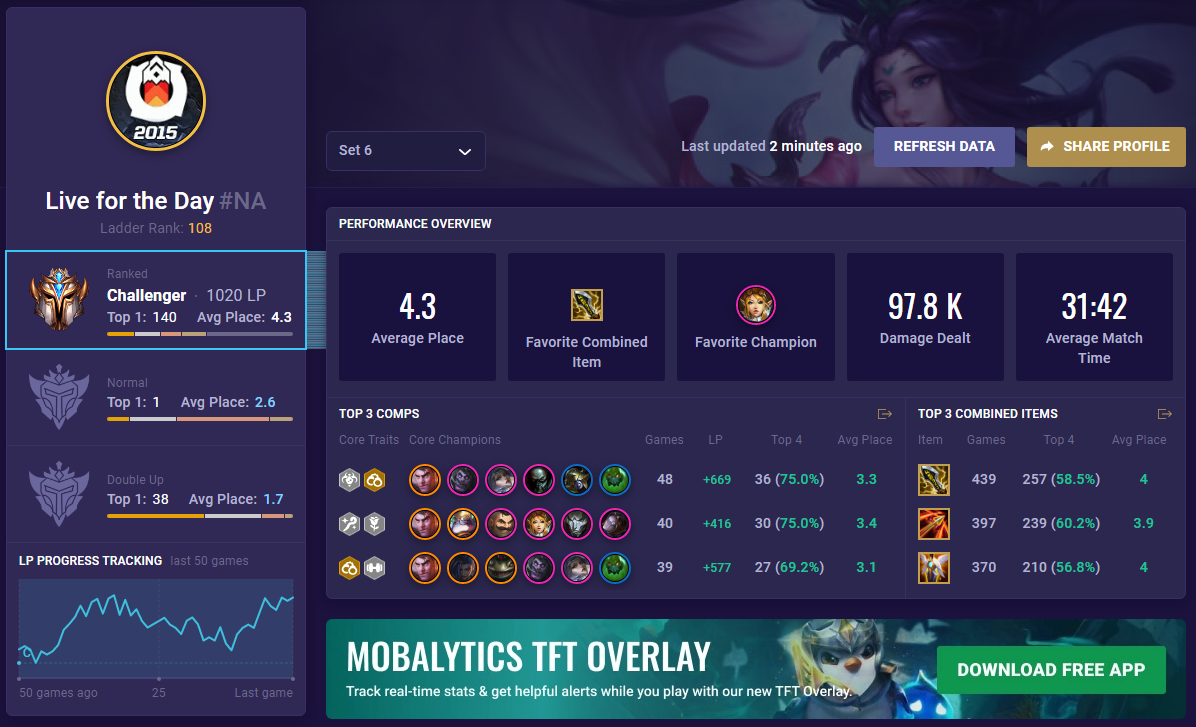 Looking at Saint’s top 3 comps, we can see a similar story to Kurumx with a small difference. He also favors late game comps with units like Jinx or Fiora, but he also plays more Jhin than Kurumx.

We see a new top item for Saintvicious with Guardian Angel. This is once again a very solid flexible item on many team comps, similar to Morellonomicon.

If you want to see how Saint pilots his comps, make sure to check out his Stream and Youtube channel as well. 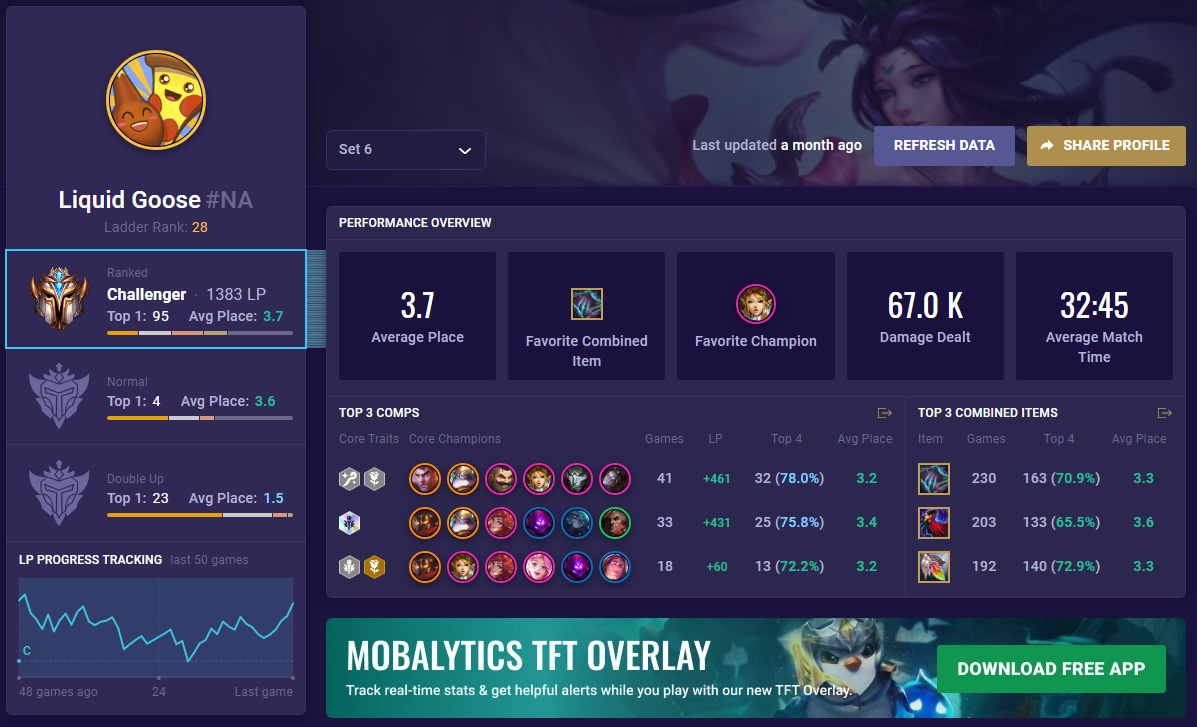 Here we see a big difference compared to the other two players. GV8 plays a lot more Arcanist games than the first two, so he is a great resource for learning those comps.

GV8’s top items are very different from the other players. He doesn’t particularly favor AD or AP items, but his top 3 items show extremely flexible items. All three of these items can easily fit into any team comp.

I would recommend Grandvice’s Stream and Youtube channel for some insight on how he plays less common team comps. He’s shown that he’s not afraid to try less common comps in the past, so he is definitely one to watch if you like more off meta comps. 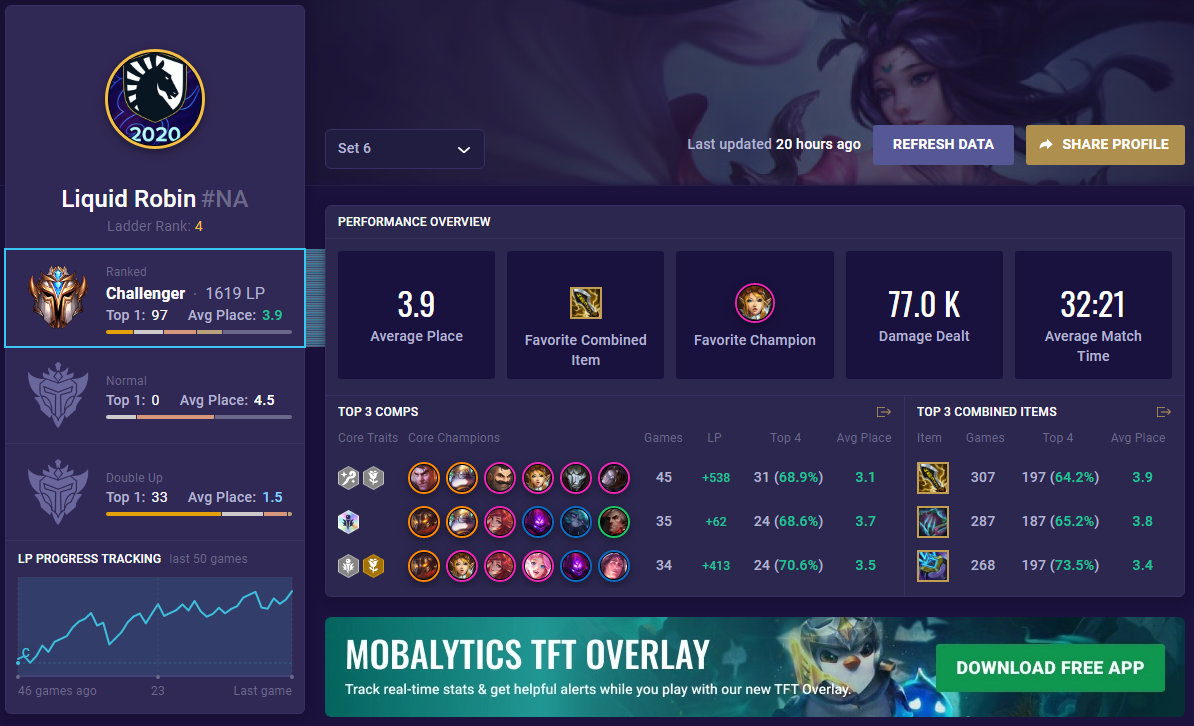 We see Robin’s top comps match that of GV8’s very similarly. Having two streamers to watch play more AP comps is valuable when one or the other isn’t streaming.

Infinity Edge and Morellonomicon are two common item picks already, but Ionic Spark stands out. This item heavily favors AP comps, but this could also just be Robin playing a lot of Akali games when Akali was overpowered.

Robin also has a Stream and Youtube much like all of the other streamers we’ve discussed. I believe that Robinsongz will be a player to watch if you’re interested in how he is able to consistently build his economy to hit late game units. His playstyle may change in upcoming patches, but the information will always be valuable in the future. 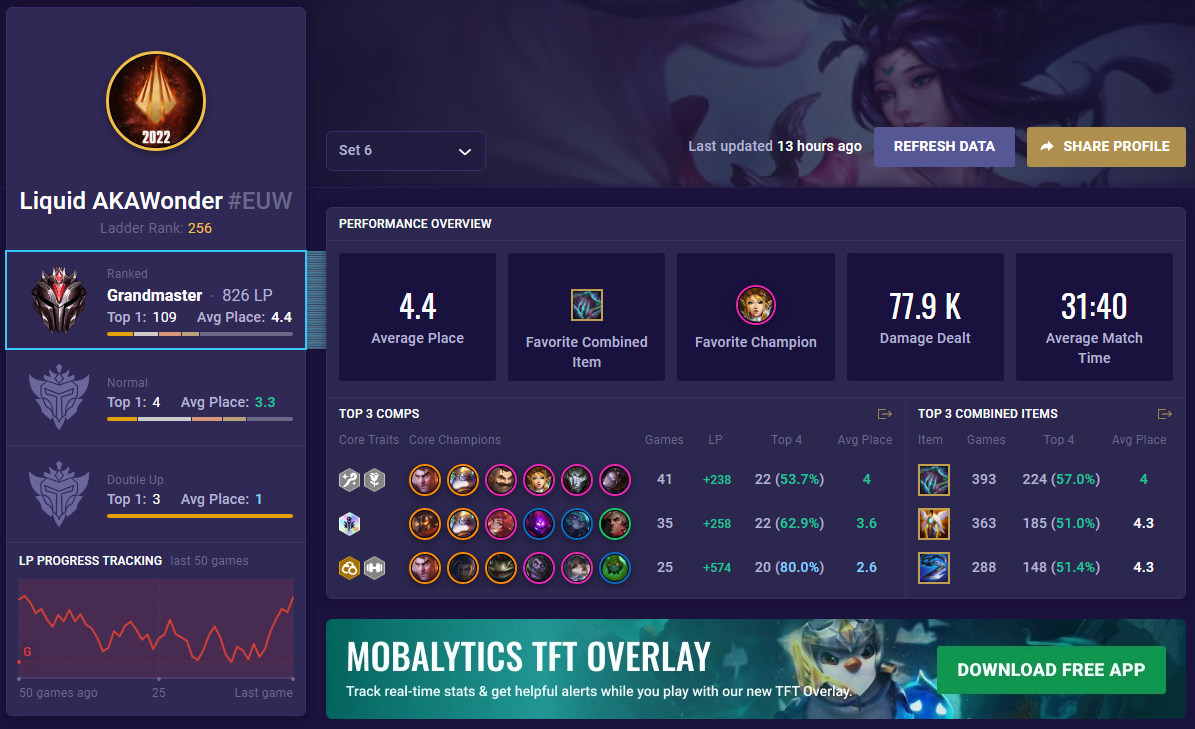 Just because this profile is Grandmaster doesn’t mean you can’t learn a lot. Seeing players from other regions also shows more variety in playstyles that is valuable for any player. The comps here are more of the same, including things like Jhin, Arcanists, and Jinx comps.

The only new item we see here is Giant Slayer. While Giant Slayer is a very powerful item, it can be lacking if you don’t have the big damage items like Infinity Edge.

AKAWonder has a Stream and Youtube channel where he speaks Spanish and has a Spanish audience. Even if you don’t speak Spanish, you can still learn a lot from watching his games. 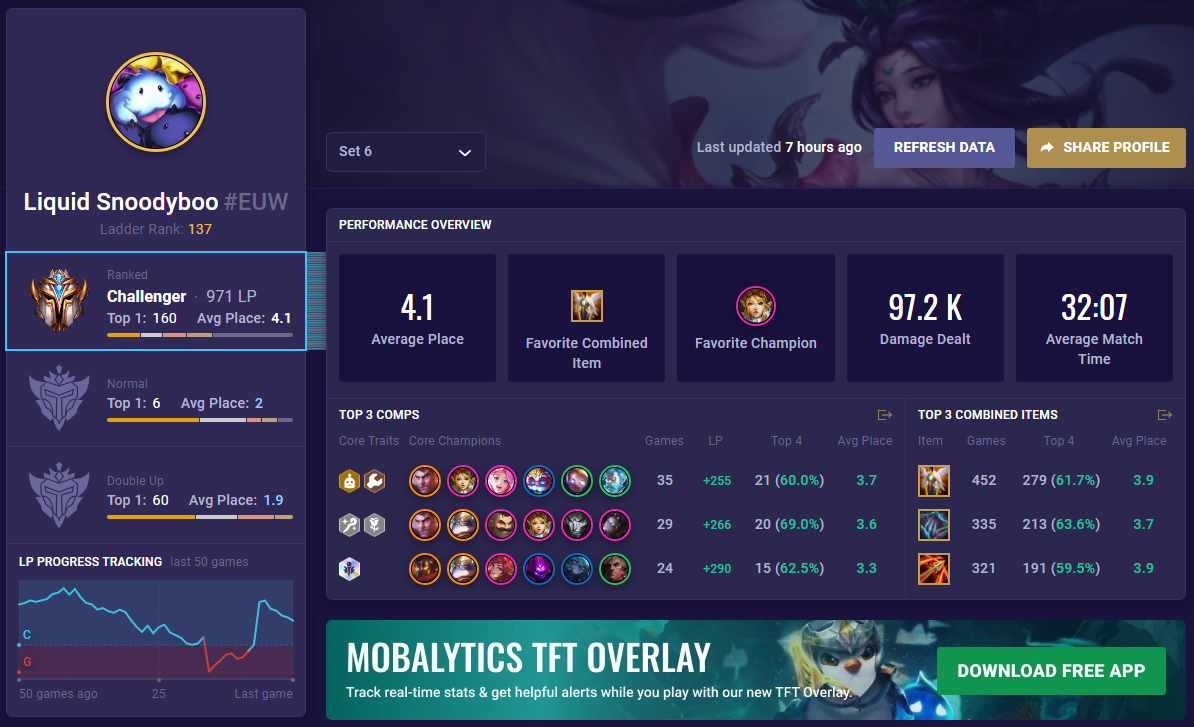 Once again by this point, a lot of the items will be repeats of what we’ve seen. Hurricane, GA, and Morello are all very strong and flexible items in the meta. His best average placement with these 3 items is with Morellonomicon, which is an interesting fact to point out. This was also the case for many of the players here.

Snoodyboo is also another EU Streamer and Youtuber who speaks Spanish and has a Spanish speaking audience. His gameplay matches more closely to the NA players we’ve looked at, but watching other regions is always useful for learning. Different regions often have slight differences in the meta, which can give you an advantage in your own region.

Watching different top players is an amazing resource for gaining insight on their various decisions. They also often create Youtube content that is educational and provides even deeper insight on their gameplay choices.

If you’re just starting out or need some help, watching these players play or checking out their profiles are great ways to get some initial insight on the meta.

However, once you’re confident in your own gameplay, I would recommend trying to see what you disagree with. No two TFT players will make the same decision every game, even two players on this list. If you disagree with an opinion or a choice these players make, delve into that more and try to figure out why. These types of analyses will help you gain deeper game knowledge and further your skill.

Thanks for reading! If you’re interested in searching up other players, be sure to check out our Profile Search Page or our Leaderboards to find players you may be interested in.