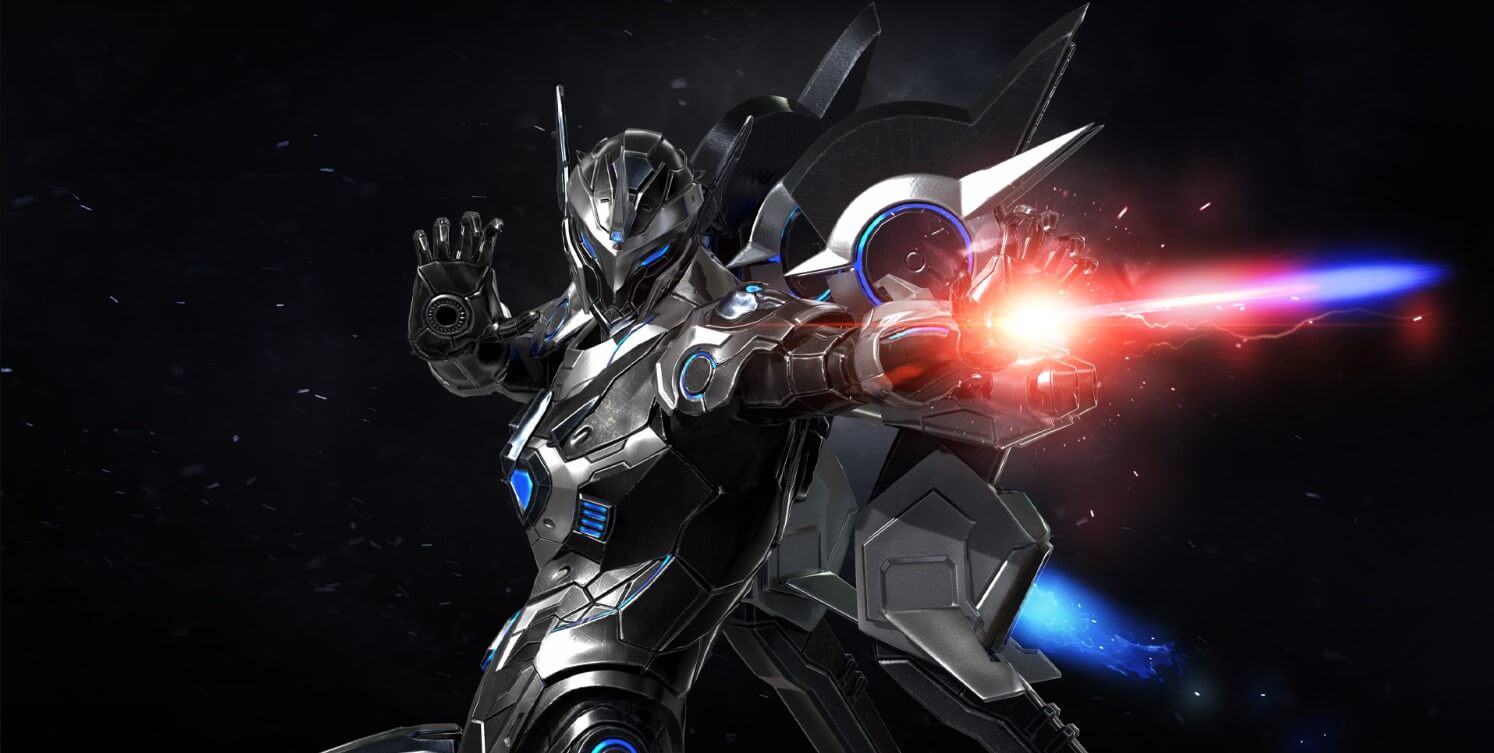 The Machinist, formerly known as the Scouter, is a very unique Lost Ark class. It utilizes a drone and a submachine gun to deal great damage, but then also has the ability to transform into Iron Man and use lasers instead.

Machinsts have the ability to micromanage their untargetable drone, so they can zone enemies and peel for allies from a large distance in PvP, or instead use the drone to safely use some skills on the boss.

The drone and the human parts of the class can be thought of as mostly separate. You can use a drone skill, then a human skill and have them both cast simultaneously – the exception being the extremely strong fusion skills that use both your drone and character to unleash powerful attacks, or provide greater utility.

Machinsts ultimately have the choice between being Iron Man, or wielding their submachine gun and drone. These two playstyles are vastly different and have interesting mechanics and combos to explore. Both are very viable, extremely fun and have engaging challenges to overcome.

Machinst is a very squishy class, as are the other Gunner advanced classes. This can be dangerous because much like Deadeyes, Machinst need to be relatively close to the boss to be able to utilise their whole kit, but they still have options to use from range. This emphasises the importance of positioning as it has the same defence coefficient as Gunslinger and Deadeye.

Similar to Artillerist, Machinst has a different mode that they can use that considerably changes their playstyle. Though more mobile than Artillerist, but less protected as it only provides immunity to stagger and is squishier.

Finally, unlike all the classes, Machinsts can micromanage their drones so they can land skills on enemies from places that other Gunner advanced classes can’t, especially since the drone cannot be hit.

Machinsts build up their meter by dealing damage to enemies using their drone skills and fusion skills. Once fully charged up the Machinst can transform and go into Hypersync mode:

Note that if this shield is broken in Hypersync mode, the Machinst will change back to human form.

Depending on your choice of class engraving, you will spend most of your time in either the human form, or the Hypersync form.

In human form you will use a combination of drone skills, normal skills, and fusion skills to output as much damage as you can, as opposed to using said skills to charge up your identity to transform and deal your damage in your Hypersync mode – where you will have another kit at your disposal.

Machinst is one of the squishiest classes in the game, so ensure you are dealing damage safely and not ignoring mechanics.

In PvP, good Machinsts will be able to micromanage their drones to; zone, peel and catch people. Machinsts also have very good burst damage that they can cast from the distance. In Hypersync mode you will be immune to stagger and can engage the enemy to output great damage.

Similar to PvE, Machinsts need to be extremely careful as they are extremely squishy, making sure that you are in a safe place to cast a skill before doing so is vital to make sure you don’t get caught as failing to do so in most cases will cause you to take significant damage.

Rockets “Raid” is a drone skill that fires 6 missiles to a target location generating substantial meter, dealing good damage, and dealing mid/high stagger.
It is also great to proc the Conviction Rune.

Particle Accelerator is a fusion skill, this means it uses a drone and your character to cast. Your drone attaches to your arm and releases energy forward. It deals amazing damage, regens a lot of identity meter, and is your best source of stagger.

This is one of the skills you can use in Hypersync mode, you jump up high and shoot a laser forward. This is the only positional attack in Hypersync mode – a front attack. It is one of your highest damaging skills in the Legacy build, but it also acts as a mid-ranged counter and a mid stagger.
You can combo this skill with Comet Flight to make it cast much faster.

As with all classes, the Machinist  has access to two Awakening abilities:

Select an area next to your character and a signal will be sent to the target location – which is a huge area. Bombs will be dropped on said location and the more bombs land the more identity meter is generated.
This is a great ultimate to reach transformation as fast as possible.

Order your drone to self-destruct, inflicting massive damage to nearby foes.
This means that you can control your drone to go near a target before self-destructing, after this ultimate is cast, the drone will be regenerated and will be in an attached state. This Awakening is fast and does a ton of damage, make sure to use this if you don’t need the identity meter generation from Airstrike.

Every Lost Ark class has access to engravings that will focus your playstyle in one particular direction. For Machinst, you will choose between Arthetine Technology and Legacy of Evolution. They are two completely different playstyles. 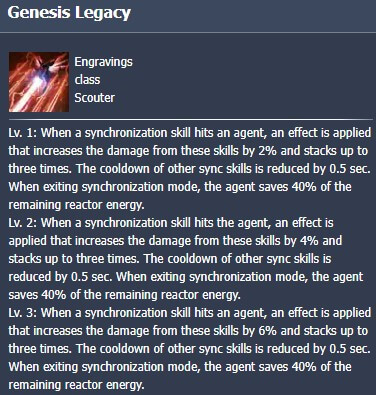 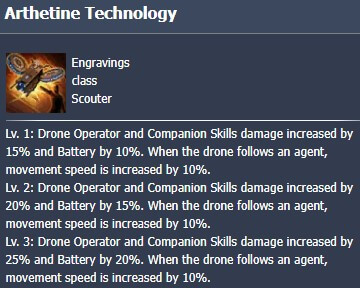 Also known as the “Ironman” build, this guide will show you the simplest way to make your Machinst the most effective. It’s important for any Machinst player to confidently execute combos in hypersync mode to make the most out of its duration. 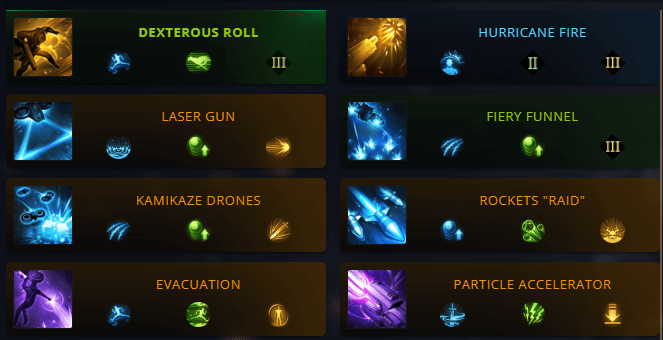 If more stagger is needed then adding an overwhelm rune to Particle Accelerator and removing the bleed from Repulsor Beams is a viable option.

Without a 9/7 stone or ancient accessories you have 2 main options.

With a 9/7 stone or ancient accessories, you can then move on to:

You want to have full Specialisation, with a Spec/Crit necklace. Specialisation will allow you to recharge your meter quickly and to increase the damage of Hypersync skills.

For Legacy Machinst, you only need 1 dmg gem and 1 cd gem, these are the Hypersync mode gems.

Hallucination, this is to make up for the low crit rate this build has, though Keen Blunt Weapon is only recommended if you have Adrenaline 3.

Legacy Machinst benefits from having Reactor Power tripods leveled up as they cause identity to be charged quicker, in addition to this you can get some QoL by getting some tripods for your mobility skills such as Dexterous roll. Overall, Legacy Machinst doesn’t require many tripods.

This guide will show you the best way to make your Machinst the most effective in his human form. It’s important for any Machinst player to confidently combine their drone and human skills, as well as knowing the priority of skills to use to maximize DPS uptime and synergy buffs. 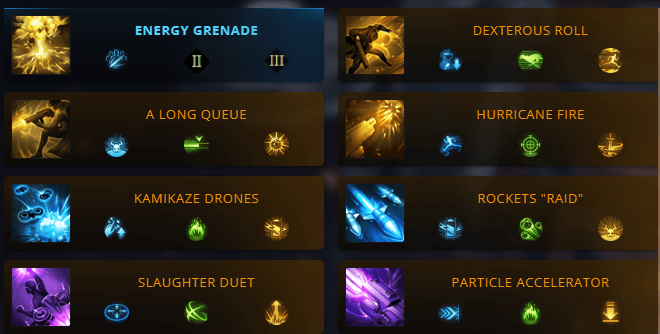 If Reactor Explosion is off cooldown, use it first in order to proc the buffs from the Dominion set.

Remember that you can use drone skills (blue) and normal skills (yellow) simultaneously, this is achieved by using a normal skill after using a drone skill, you cannot do this the other way around.

With this in mind:

Unlike the Legacy build, try to maintain your synergy buff of 6% damage to allies and yourself active by using Energy Grenade on the target, this skill must deal damage to the enemy to proc the synergy. The synergy on this skill lasts 14 seconds, so you should be able to get 100% uptime on it comfortably.

These are the recommended gems, there is 1 gem missing that can be filled for a cooldown gem for one of the remaining abilities. Since Energy Grenade has 12 seconds of cooldown and the synergy it applies lasts for 14 seconds it doesn’t need a cooldown gem.

Thanks for reading our Lost Ark Machinist guide! To learn more about other classes, check out our collection of Lost Ark class guides.